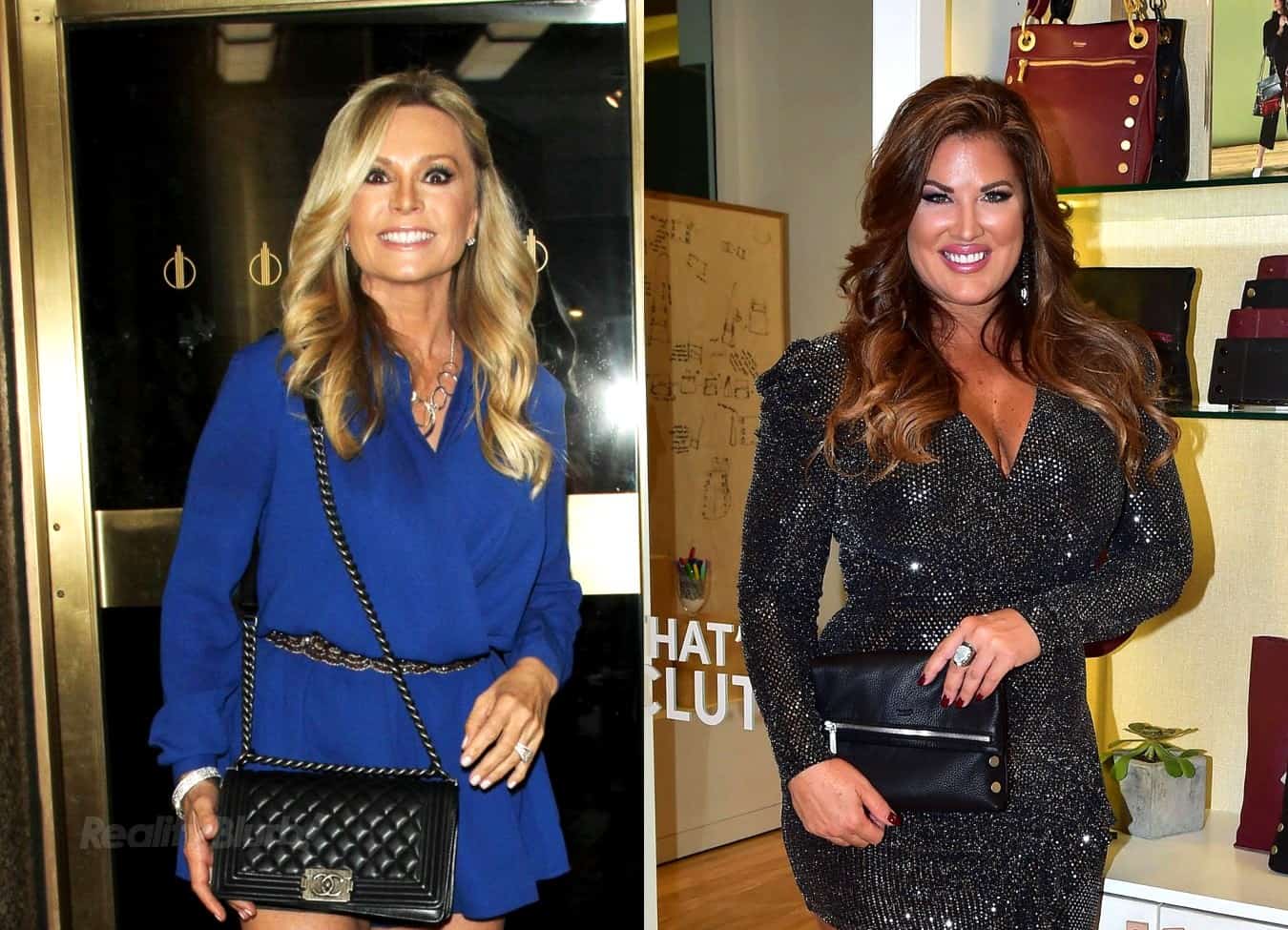 The Real Housewives of Orange County star Tamra Judge lashed out on Twitter against Emily Simpson today after Emily responded to a fan’s opinion about her weight.

In RHOC’s most recent episode, Emily went to CUT Fitness owners Tamra and her husband Eddie Judge for an assessment. After reluctantly stepping on the scale, the mother-of-two was told that based on her body fat percentage, weight, and other factors, she was considered “obese.” But since the episode aired, one fan took the time to argue that Emily actually wasn’t obese.

“Emily is NOT obese at 34% body fat. Shame on Tamra and Eddie!!!” the fan wrote on Twitter, referring to this week’s episode. She then proceeded to write what she thought were the correct measurements for obesity in a woman Emily’s age.

The attorney-turned-housewife simply responded, “Thank you🙏”

But Tamra, unlike Emily, didn’t appreciate the tweet at all. In response to Emily’s comment, she wrote, “You are unbelievable. We try to help you and I’ve seen multiple tweet of yours that are not nice . Eddie spent over an hour with you talking health & nutrition. No one made you get on the scale! You love playing victim and it’s getting old!!!” 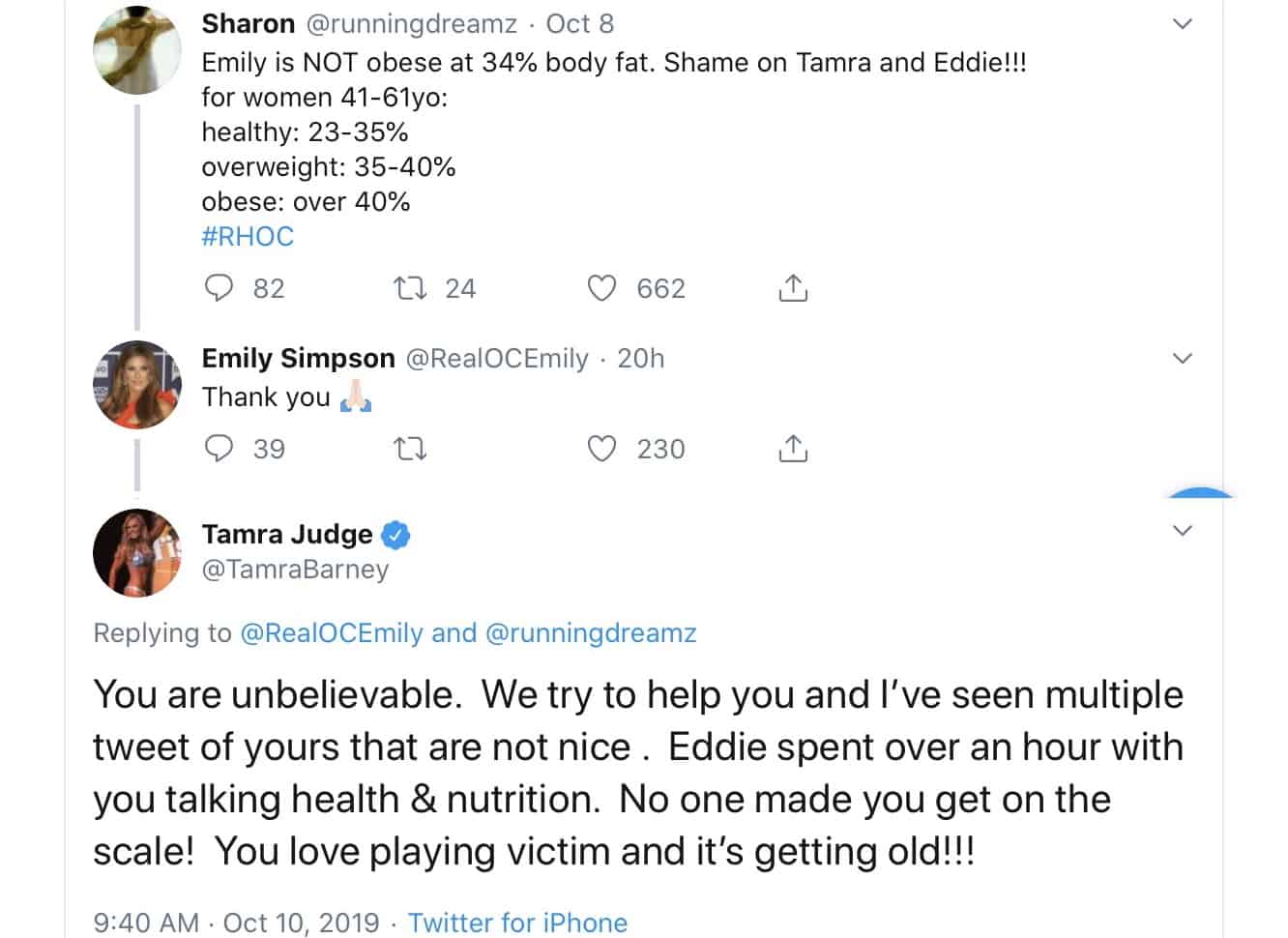 But things only escalated from there.

“I simply said ‘thank you’ to someone who said I wasn’t ‘obese’. That’s all. If you want to read more into that, that’s on you.” the mother-of-two wrote in response to Tamra’s fiery comment.

“That’s not All you’ve said!” Tamra tweeted back at Emily. 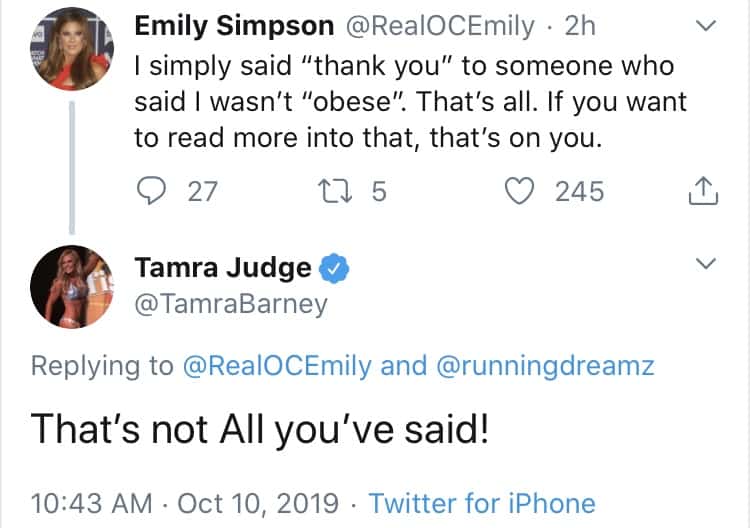 That’s when another fan got in on the conversation, seemingly defending Emily’s appearance.

Tamra was quick to respond to the entire thread, writing, “[Then] Why did she ask for our help ? You can be 120 lbs and have 35% body fat. It’s not healthy. Educate yourself. It’s not about how you look!!!” 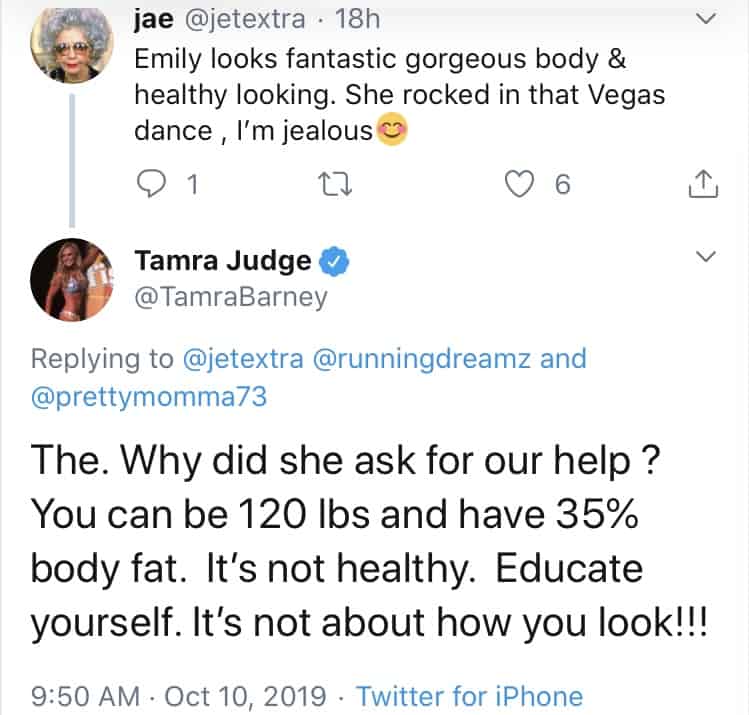 As for Emily, she responded to Tamra by saying she has had nothing negative to say about the help she received from her and Eddie. First, Emily confirmed to a fan that she was indeed unhappy about her weight being displayed during the latest episode.

“I asked them not to do that,” wrote Emily to a fan who wondered if she was okay with the scale being zoomed in on after she stepped on it.

I asked them not to do that

Later, Emily added that any criticism she had about spending time in Tamra and Eddie’s gym has been about production displaying her weight on the show, and it has nothing to do with the service she received. Indeed, Emily praised Tamra and Eddie during her appearance on Watch What Happens Live on Tuesday night.

“My comments were strictly related to production. I asked them not to film the scale. That is all I have referred to,” tweeted Emily.

My comments were strictly related to production. I asked them not to film the scale. That is all I have referred to.

While it was a bit surprising to see Emily at Tamra and Eddie’s gym given what she’s said about it in the past, she allowed herself to be vulnerable there — something that Tamra said made her feel closer to Emily on the show. We’ll likely see whether or not Emily actually follows Tamra and Eddie’s advice in upcoming episodes.

Kelly Dodd Praises Michael Dodd’s Girlfriend Laura White as an “Amazing Step Mom” to Jolie, Plus She Addresses Status on RHOC Ahead of Seas...