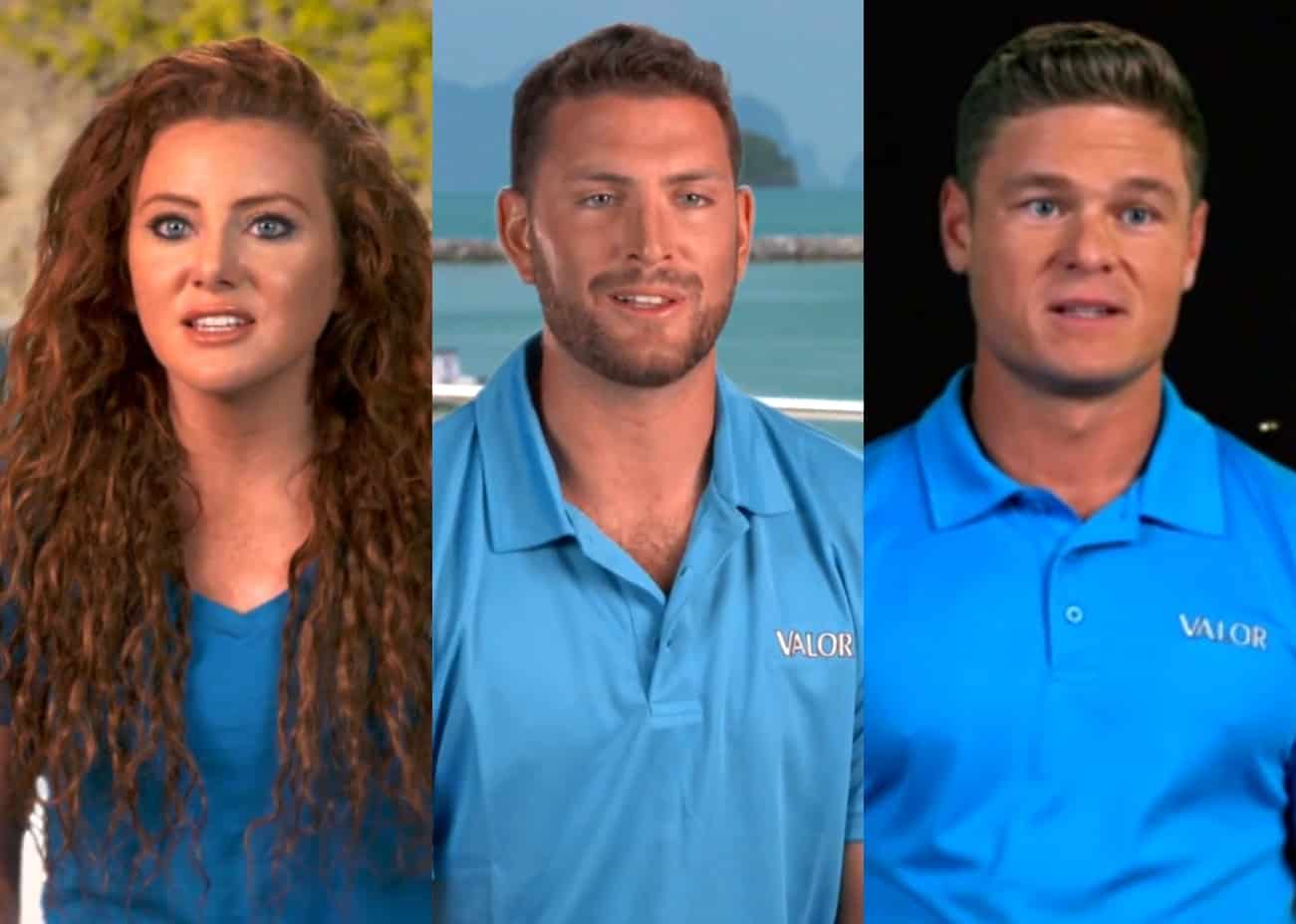 On this episode of Below Deck, the crew gets put to the ultimate test as they lose two of their own.

Day two of the charter and Abbi has had enough. I guess the bliss of being engaged via text message has worn off and Abbi is coming to terms with the fact that perhaps she may have to quit yachting. She tearfully tells Simone and Brian that she can’t handle the constant need for perfection on the boat. Because of that, she feels uncomfortable.

Brian runs to Ashton and fills him in on Abbi’s current situation. Ashton confronts Abbi and she cry-talks about how she wants to “just leave.” Ashton doesn’t really do a great job of trying to talk Abbi into staying and he lets her quit. Just like that!  He didn’t even fake-try to keep her on board. Ouch.

In the meantime, the crew prepares for the night’s full-moon theme party. As Kate gathers anything to emulate a sort of rave-like setting, Ashton lets Captain Lee know the news. He tells the captain that Abbi, “feels depressed and she would like to leave the boat.” Captain Lee looks irritated and states, “Classic example of your mouth writing a check that you a*s can’t cash.” Does this man ever run out of one-liners?! He is livid that now he has to find a replacement for Abbi, a girl who just couldn’t hang with the big guns.

Tanner is annoyed at Abbi leaving cuz now he’s gonna have to step up to the plate, even though he feels like hot garbage. The poor guy is literally barfing his brains out, but have you seen him whine one time? I think not.

On the opposite end of the spectrum, there’s Chef Kevin. Kevin continues to complain because that’s his favorite hobby and interest. He is worried about tonight’s meal, as Captain Lee is going to be sitting down for dinner. Hey, as long as he plates a dish for the captain, things should be just fine, amiright?!

Simone finally gets freed from her “laundry machine” duties. She chats with Ashton on the beach and explains that she is starting to feel a bit more like a third stew, not a second stew. Maybe she should bring that up to Kate. But alas, Kate’s too busy jotting down Kevin’s menu for the evening…a rather daring menu for that matter, I might add…

Later, Abbi lets Kate know that she is leaving. Kate tries to talk Abbi into staying, as it’s only “four and a half more weeks,” but Abbi is over it and ready to get off this boat and sail off (literally) with her text message fiancé. At least Kate feigned trying to make Abbi feel like part of the yacht.

Poor Tanner is “hammering his lungs out” and Ashton is selfishly more concerned about the never-ending chore list he needs to get done because now they are gonna be TWO members down. Ashton rubs me the wrong way. It seems like all he cares about is himself.

Chef Kevin is stressing about his beef tongue presentation, as he should. I mean, these girls are pretty basic and look like they don’t stray from the usual menu options. Why in the WORLD would Kevin choose to serve them beef tongue, especially when the captain (who is already mad at Kevin) is dining with the guests?! The tongue goes over (shockingly) well and Kevin feels like a million bucks. Captain Lee is happy, and therefore, Kevin is thrilled.

Speaking of thrilled…I love how Kate is essentially selling sex with this body painted crew. Ashton and Brian begin painting themselves so they can serve dessert to the guests and keep up with the full-moon party theme. Kate can’t even focus because Brian’s “penis ravine” is so pronounced. Even Kevin blushes as he presents the dish, and like the boss he is, Captain Lee doesn’t even flinch.

As the night wears on, Tanner keeps barfing. In better news, Captain Lee finds Kevin to let him know he was impressed with the dinner. Kevin looks thrilled and relieved and well, downright proud. Tongue for the win!

The next morning, breakfast is served and everyone is working like a well-oiled machine…well, except for Abbi (who has completely checked out) and for Tanner (who is vomming his brains out). The guy is an absolute trooper and perhaps Abbi should take a cue from Tanner. He understands work ethic, even when his body is rejecting everything.

Kate runs up to chat with Captain Lee to let him know about Tanner’s current situation. Captain Lee is less than pleased to hear about Tanner’s sickness and decides once docked, a doctor will come to check Tanner out. I hope it’s the same doctor who diagnosed Brandy a few charters back. LOL.

The yacht pulls into the port and Abbi is finding it hard to believe that she has to pack and go as soon as they dock. I feel as though she thinks they should throw a party for her or something?? Why does Abbi act like the crew owes her something when she is the one who quit!?

The charter guests make their way off the yacht and hand over that thick tip envelope, and off the crew goes to do their thang. Captain Lee calls Ashton and Abbi up to the wheelhouse, and if I were Abbi I would be sh*tting my pants having to confront this guy. I, for one, would hate letting down the captain, and he lets Abbi know that she needs to GTFO. Captain Lee makes it clear that “yachting is not for quitters,” and so Abbi begins her goodbye tour. Although she is sad, she knows this is the best move for her. Now…who will the newbie be?

The show must go on, and the six-person crew gathers for the tip meeting. Tanner is sequestered away during this time, as he should be! Captain Lee distributes the wad of cash, but tells them that depending on Tanner’s diagnosis, they may be down TWO crew members…which translates to more work for everyone.

According to the doc, it turns out that Tanner has “sweet belly,” a common viral stomach infection. Gross. Tanner gets a shot and should be better by tomorrow. Can we talk about how much of a gentleman Tanner is?! He didn’t even want to accept his tip cuz he barely worked during the charter. He deserves a prize for that behavior.

Awww, look at Brian throwing himself at Courtney  I am not sure why as she has the personality of wet cardboard, but I digress. While out on a date-like boat ride, we find out Brian has a daughter!  Somehow, Mr. Smooth gets Courtney to smile and…even laugh! In the meantime, the rest of the peeps prep for the night out while poor Tanner deals with his sweet belly.

Ashton creeps on the girls all the way to the club and the night out begins. We are talking shots, dancing, and smoke machines. Everyone seems to be in a great mood, and even Kate is shimmying to the beat. Ashton gets drunk after, like, two drinks, and therefore, he tries to schmooze with Courtney. The guy is a royal c*ck block, but Brian knows Ashton stands zero chance with Courtney.

The next thing we know, we catch Kate and Ashton making out. Hardcore. Kate understands that Ashton is solely sucking face with her because he is p*ssed Courtney isn’t into him. She also states that she pulled away as if she would pull away from her cousin. Yuck.

Later, Ashton is prowling. Kate goes to bed, but Courtney is down in the kitchen. Brian has no time for drunk Ashton and states, “I think he gets his genitals way too involved.” Ashton tries hitting on Courtney, and I have come to the conclusion that he makes me cringe. He is such a try-hard. His smooth-talking ways are not gonna win Courtney over and even he knows that.

As he mopes off to bed, alone, I might add, Ashton states, “I am tired of working so hard to get my d*ck sucked.” Whoopsie. Bet he wishes he didn’t say that out loud…total dog.