The RHOC Recap: Kelly and Tamra Continue to Feud as Braunwyn Hosts a Weaning Party 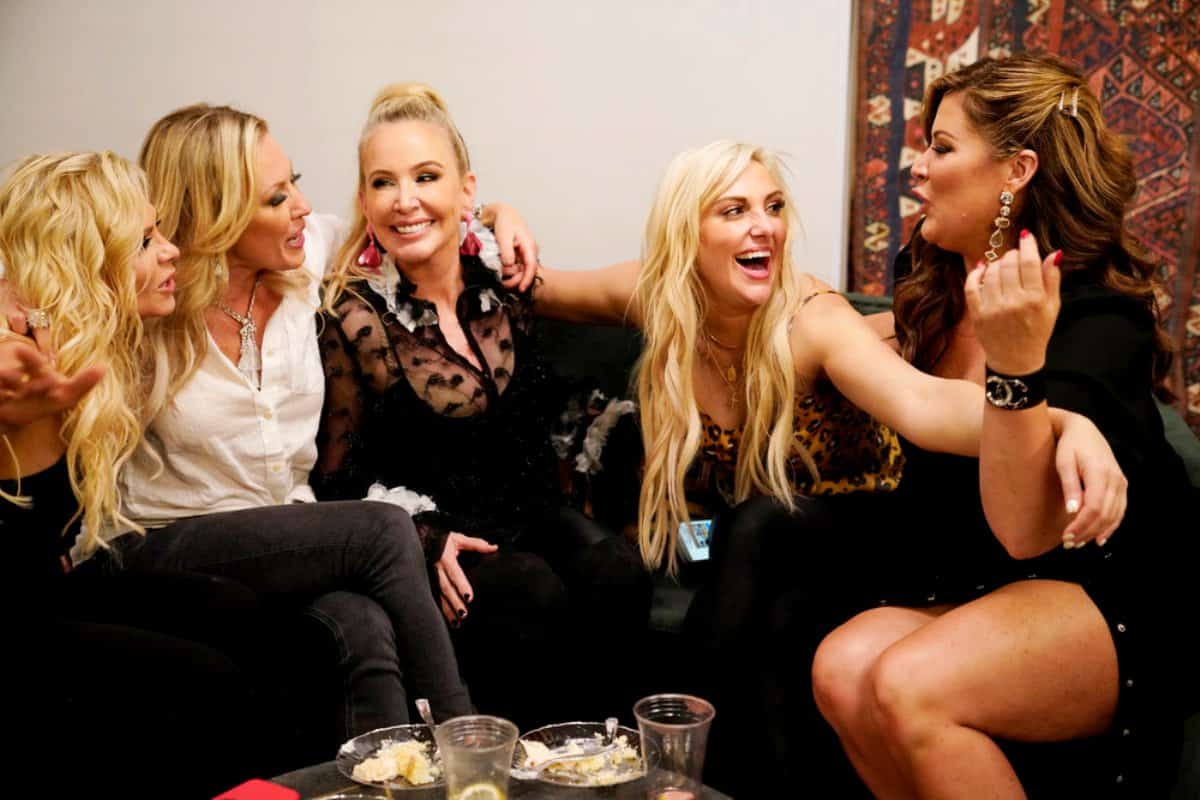 On this episode of the Real Housewives of Orange County, we realize that these women are looking for any reason to throw a party and that choosing sides may be harder than it looks.

Well, well, well. Look who we have here. Vicki comes scampering in for a lunch and to obvi stroke Tamra‘s ego. She listens intently as Tamra asks, “Do you see what Kelly is doing on social media?” Tamra is livid because while Shannon and Tamra were having coffee a few days ago, someone secretly recorded their conversation. That information got into Kelly’s hands, so therefore, Kelly is p*ssed. (To be fair, when is Kelly NOT mad?!) The problem is, the recording demonstrates the convo out of context and that, according to Tamra, is how words can get misconstrued.

Do we have a new tres amigas here? Why in the world is Emily joining Tamra and Vicki for lunch…other than to bash Kelly… Speaking of Kelly, she cries during a FaceTime conversation with her mother and decides that right then, at that moment, would be the best time to apologize to her mom. Ya know, right smack in the middle of a restaurant over a bloody Mary. LOL. How quickly Kelly’s tears go away as she talks to her mom about the infamous rumors Tamra has been spreading…

How many times this season has Shannon wore those white pants, BTW? She meets Kelly for breakfast and makes it clear that her recorded conversation with Tamra was taken out of context. Kelly is finding that hard to believe and feels as though the whole world is against her.

Over at the other table, Tamra is annoyed because now Kelly tweeted that essentially she was on Jim Bellino’s side. In case you didn’t know, Jim Bellino is suing Tamra and Shannon for defamation of character. The guy is angry at Tamra and Shannon because they talked sh*t about him during a podcast. Kelly “siding” with Jim is a real slap in the face to Shannon and Tamra. Ouch.

Kelly swears that Shan is getting manipulated by some “white trailer trash Tamra.” Kelly spills that Tamra tells everyone Shannon is a drunk and is going to “drink herself to death.” There’s a whole lotta she said/she said and a big fat line is drawn in the sand. Emily is having a hard time choosing a side, but she states that she is going to back up Kelly because they’re closer.

I think Emily is onto something — I wouldn’t go against Kelly either! I mean, Kelly is acting like a lunatic. The way she moves, the way she exits the table. Something is just not right with her.

Braunwyn and her cool hubby, Sean, (and his necklace) are out planning her weaning party. Ya know, a party to celebrate the fact that after nearly 19 years, Braunwyn is FINALLY done breastfeeding. I cannot even imagine! Sounds like an odd party, but I guess any excuse for a celebration?

Braunwyn lets Sean know that she “did say on the invitation inappropriate gifts.” Man, this girl is a super try-hard. The couple goes shopping and I love how they, too, decide that it would a great time to have a heavy convo, right out in public. What is with these people? They discuss the newest Tamra drama and the newest rumors getting spread about Braunwyn courtesy of Tamra. Evidently, Tamra is telling people she hates Braunwyn and that Braunwyn drinks too much. BTW, she got all of this information from Kelly…. How DOES Kelly know alllll of this dirt?

Gina and Emily are on their way to get gifts for Braunwyn’s weaning party. Gina shares that her ex, Matt, actually cried upon hearing Gina is seeing another man (ahem, Dr. Hottie). Poor Gina is so broken. She loves the attention Matt is giving her, even though HE broke up the family. When Gina and Emily begin trying on sex shop accessories, I have to look away. I have seen enough of these women in wigs this season!

Shannon is preparing for the very first deposition for her divorce from her ex-husband, David. David’s attorney will be asking Shannon about the marriage and she is dreading it completely. Shannon phones her business manager on the way to court and discusses the launch of her low-calorie food line. She has high hopes that this new venture will be the answer to any financial difficulties that may stem from the divorce, but I wouldn’t bank on that if I was her.

Tamra and Braunwyn decide it would be an excellent idea to meet for cocktails and discuss their beef. After Braunwyn orders what could possibly be the most obnoxious drink in history, she demands to know why Tamra called her a liar. Braunwyn lays into Tamra and doesn’t give her a chance to defend herself. Tamra attempts to explain that Kelly takes *this* bit of information and twists it. Braunwyn is torn and having a hard time figuring out the truth between Kelly and Tamra. Tamra explains that Kelly is “really going dirty.”

All of the ladies are prepping for Braunwyn’s event (aka the strangest party in housewife history) and it seems like Tamra and Vicki are putting an awful lot of effort into this. They are getting their hair and makeup done when Shannon FaceTimes Tamra and lets her know that after all was said and done at court, there’s a strong possibility that she would come out financially broken. Shannon looks like she is about to throw up. Those expensive purses and shoes do cost an awful lot of money…

A couple of hottie bartenders roll up to Braunwyn’s sex apartment. The party is about to be underway and the ladies start showing up. Braunwyn lets Tamra and Vicki know that Kelly will not be in attendance and you can tell that everyone just breathes a sigh of relief.

In the meantime, Kelly is out with her OTHER girlfriends. They seem way more fun than the dramatic crew she usually surrounds herself with (i.e. the OC ladies). Kelly’s friends listen in as Kelly shares all of the rumors spread by Tamra and they cackle with disbelief.

When Shannon arrives to the weaning party, she is a real Debbie Downer. She explains her current court situation, which is pretty bleak, but luckily there’s some news to cheer her up. Braunwyn invites Gina, Emily, Vicki, Tamra, and Shannon to Miami, her favorite city! Braunwyn has high hopes that once the women see her in her element there, they may learn to understand some of Braunwyn’s quirky ways. Right.

Besides Miami, Braunwyn also wants to take the ladies to Key West. Shannon makes it very clear that she will go to Miami, but not to Key West. It turns out, Key West is where David allegedly started his affair. There is absolutely no proof to Shannon’s statement, but she has it in her head, so Key West is out of the question completely.

Basically, the weaning party is like a bachelorette party. Braunwyn is getting a striptease from a girl and so, Vicki, the nun, leaves the party. Gina asks the same question that I was asking myself. “Is this what everyone in Orange County does when they stop breastfeeding?” Braunwyn is annihilated and I am not quite sure what the hell is going on. A DJ is spinning. Braunwyn is falling. And dildos are getting blurred out left and right. I bet her 35 kids are realllllly proud of their mom’s behavior. Mind you, this is all happening while the SUN IS STILL OUT.

Later, Shannon meets with her lawyer. This divorce is as nasty as can be and David has been playing dirty. Her lawyer lets her know that the trial is coming up and that he is very unsure about her financial future. Shannon is adamant that she helped David grow his business and cannot even fathom that she could possibly be left financially unstable after this divorce is said and done. Good thing she has that low-cal food line now, amiright?