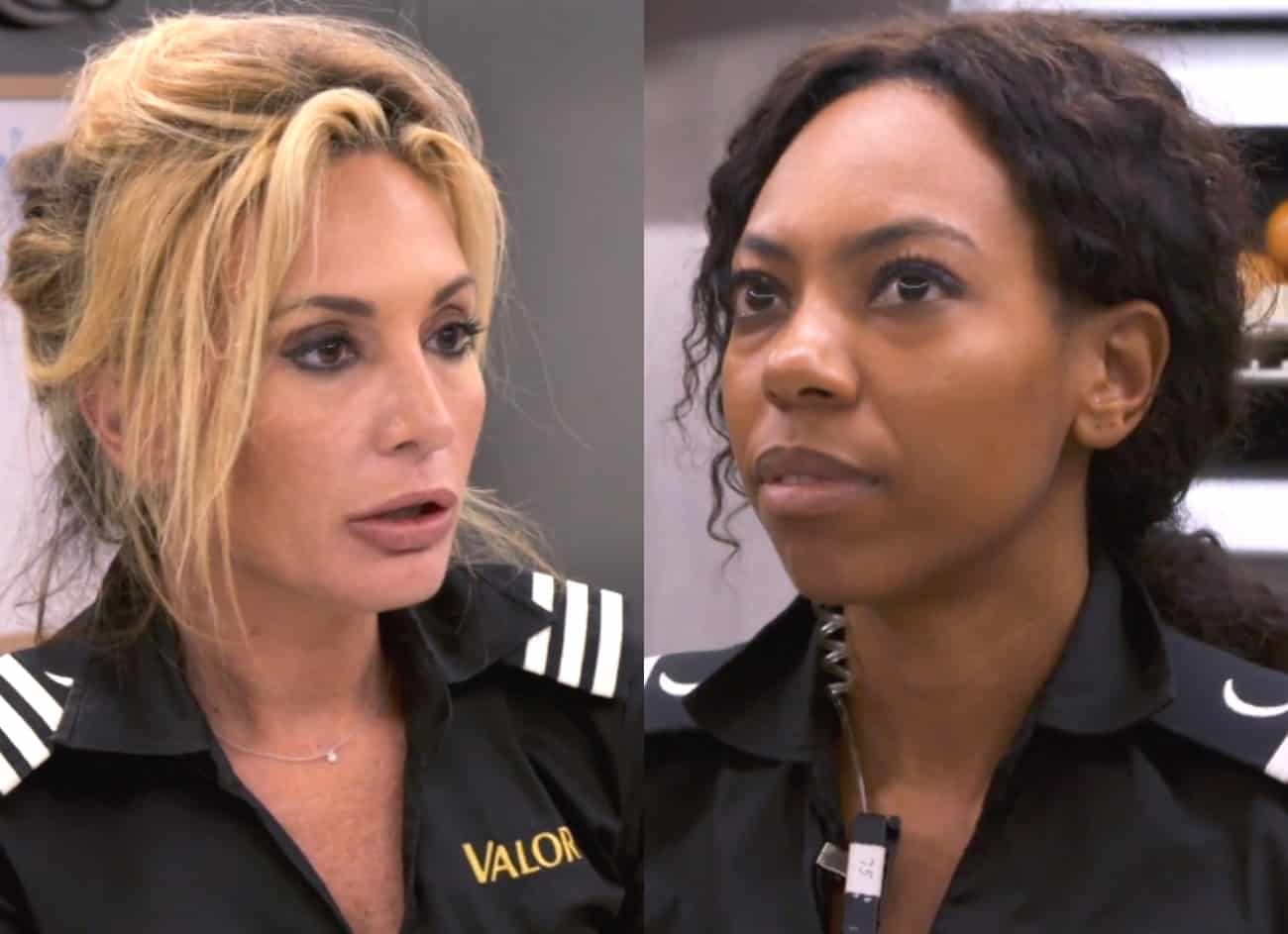 On this episode of Below Deck, a frustrated stew vents her displeasure and a hook up is made public.

So much for a fun crew dinner, huh? Ashton essentially tells Rhylee that SHE’S the problem. She flips out on everyone, including Tanner. Kate is having a hard time only blaming Rhylee, as she also has some beef with Kevin. She states, “Kevin acts like he is Gordan Ramsey” and Kate is pleased that Rhylee finally put him in his place. Kate tells Rhylee, “I have your back. Kevin has been obnoxious all night.” Anddd that he is.

Kevin isn’t the only one who is out of control. Tanner is F*CKED up. He can hardly stand. Just when you thought he was done, the guy comes back from the dead after barfing his brains out. EW. Then, he begins making out with Simone after his puking rally. Poor, poor Simone. She is so excited Tanner is finally paying attention to her, but the bad news is, Tanner will have zero recollection of this hookup in the morning.

This crew is an absolute sh*t show. They are passing out and can barely walk. But Courtney is relatively sober, and once back to the ship, pays a visit to her boo, Brian, who was home nursing his infected knee. Gross.

The next morning is rough. As expected, Tanner doesn’t remember anything and he just keeps repeating “Jiminy Crickets.” Cuz that’s not annoying. Rhylee is regretting flying off the handle. She admits that she is “quick to anger,” but she will try her best not to “rock the boat.” Too late for that…

When Ashton asks Tanner about his sleepover with Simone, Tanner comes clean that he doesn’t remember one thing about it. The only thing he remembers is the blow-up with Rhylee. Things are tense with the deck crew and Ashton makes it very clear that he doesn’t like Rhylee. That certainly doesn’t come as a surprise.

Ashton decides to confront Rhylee and discuss the previous night’s antics. He apologizes and she apologizes, and they decide that they should put their hard feelings aside and make it work. There’s another charter coming and things have to run smoothly.

This is a shortened, relaxed charter full of moms looking to getaway. Man, that sounds like heaven compared to some of the other charters this season!

It is apparently smooth things over day. Kevin admits to being a bad drinker and is happy to hear that Rhylee doesn’t hold grudges. And Tanner…well he attempts to smooth things over with Simone by asking her to a sober sleepover….where things get a bit frisky.

After day three, Brian’s knee is not getting better. Captain Lee has decided that he will be sending Brian to the hospital in order to try and get him better. Brian is pretty worried and scared about his future, and I would be, too. A hospital in Thailand sounds terrifying!

The crew preps for the approaching guests and it’s really just a bunch of middle-aged women looking for a good time. Kate gives the grand tour and the women ooh and ah over everything.

Later, Brian phones Captain Lee to tell him that he had to have his knee cut open while at the hospital. Turns out that infection worsened and some of the tissue had to be removed in order to make his knee better. So. Now Brian has a giant hole in his knee, thus making his return to work pretty hard. Captain Lee tells him he can ease back into work but he better go slowly.

Upon returning to the yacht, Brian beelines for Courtney and goes in for a hug. To that, she reacts, “Have you showered? Ew. I am covered in your hospital germs.” Ah. That’s the welcome back greeting I am sure he intended to have.

How bout a cave picnic? Um, no thanks. As the guests dine with the bats, Kevin visits with his daughter via FaceTime and catches up. We learn that Kevin’s life was rough growing up, but that he works as hard as he does to help support his daughter. #dadlife.

The tide has dropped and the situation is getting harder for the guests to get back on board. The cave is surrounded by coral, which also houses a variety of sea creatures. Because of this, the women are rocking water shoes provided by the crew. Unfortunately, while making her way back to the boat, one of the guests stepped on a sea urchin. You know it must hurt pretty badly if she can feel it after all of that booze she has been consuming. It turns out that vinegar is the only way to cure the injury, and so homegirl essentially bathes in it to cure herself. Yum.

The white party scheduled for tonight is more likely “a blackout party,” according to Kate. Speaking of Kate, Simone is really displeased with her. Simone keeps getting stuck doing laundry. Wait, I thought she LIKED laundry?? I guess she is getting pretty tired of all of that ironing. Simone confides in her mom, gets a pep talk, and is prepping to confront Kate with her displeasure.

Why are these women wearing crowns during dinner? I am somewhat confused. Also confused is Captain Lee, who is stuck dining with these lunatics. One of the guests actually comes back to the galley to help with service, that’s how wasted they are. Kate has NO problem teaching HER, but should Simone ask for some tutoring, Kate loses patience instantly. Hmmm.

Post dinner, Kate sits down with Rhylee. Kate shares that she expected Simone to progress over the course of the season, but she has been let down. Simone is off crying, I mean “sulking,” according to Kate. She asks to talk to Kate and Kate defends herself by saying, “I’m not sure you’re a great second stew.” Kate tells Simone her behavior is not appropriate, as she should not go around telling others on the boat she is unhappy. Simone is left stuttering and Kate is just giving Simone her stony stare, like b*tch, you don’t mess with me.