Home Real Housewives of Orange County News RHOC Recap: Vicki and Kelly Blast Each Other During Vacation Brawl, Plus Vicki Gets Injured

RHOC Recap: Vicki and Kelly Blast Each Other During Vacation Brawl, Plus Vicki Gets Injured 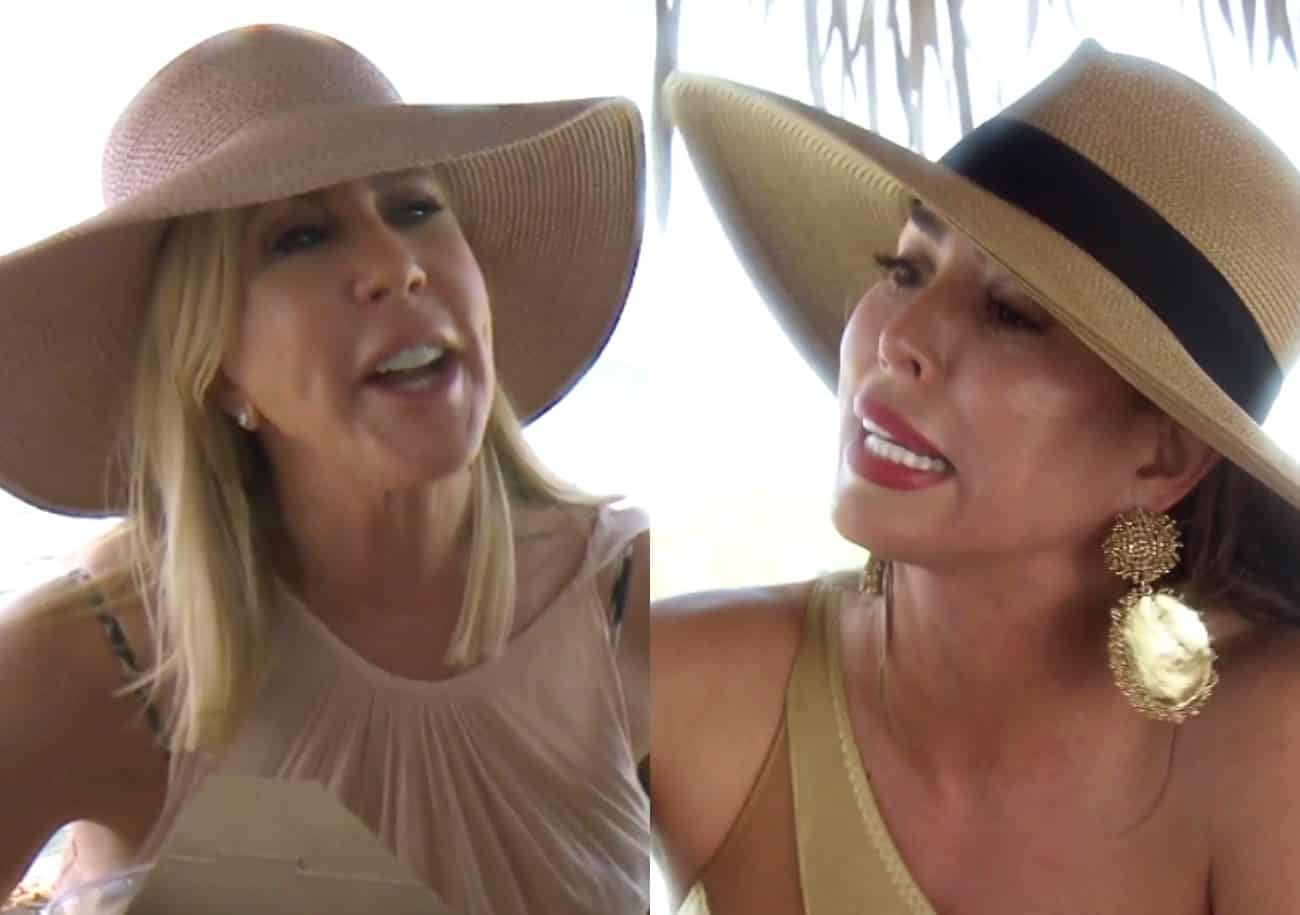 On this episode of the Real Housewives of Orange County, there’s certainly no shortage of drama.

“Go s*ck some more d*k for money, Kelly. That’s what you do best.”  Yea.  Had to start the recap with that one-liner that flew out of Tamra‘s mouth. In case you forgot, these women hold grudges and fight about the same things incessantly. In this scenario, Kelly flipped out on Tamra for supposedly talking sh*t about her, and so, Tamra retaliated.

Gina steps in and reminds Kelly that Tamra has had Kelly’s back the whole time.  Braunwyn is devastated that her Miami trip is falling apart at the seams and Kelly is zinging low blows like it’s her job. As Shannon approaches in her mod squad-like dress, Kelly states, “Here comes Austin Powers.” LOL.

These ladies are legit mental.  I feel like I missed 19 steps cuz now Tamra and Kelly are hugging? Tamra doesn’t quite accept the apology. Instead, she chooses to take us all down memory lane and reiterate alllllllll of the issues she has had in the past with Kelly. It’s all too much. Kelly tells Tamra the whole lawsuit thing was a “misunderstanding” (whoops). Shannon looks on appalled and isn’t quite ready to let her issues with Kelly slide.

It’s time for everyone to relocate to Key West. They pile into two convertibles and the tres amigas go next level because they can’t have their weaves fall out/their faces fall. They slap on scarves and white sunglasses and look eerily similar to “Thelma and Louise, but the geriatric version.” #fact.

So it turns out that the woman that Kelly fought at a bar (who are these people?) has started communicating with Vicki via Instagram. Vicki loves the gossip and the drama and to have any dirt on Kelly that she possibly can. Shannon and Tamra pretend like they think this is a bad idea, but they totally love being in on it.

Three hours later, the ladies arrive in Key West. The hotel seems pretty cute, and the women begin getting ready for tonight’s activity: a drag show. As they paint their faces, Gina confides in Emily and states that she is uncomfortable knowing that Vicki is conversing with the bar fight lady. Gina def wants to let Kelly know what’s been going on, but she just isn’t sure how to tell her.

Kelly checks in with her daughter, Jolie. She does a pretty good job of acting like a mom for a little bit. And then, she starts going on and on about how she hates Vicki.

Nothing new: the youngins are stuck waiting on the tres amigas. This time, they have decided to leave them in the dust cuz they gotta get to the drag show. The crowd at this show is a hoot and it is a packed house. Goodness. Get a load of Tamra’s top half of that jumpsuit. No wonder she was late getting to the show. She had to tape her tatas down.

Post show, the women roll up to the bar and begin throwing back tequila shots. Gina takes this opportunity to talk to Tamra about Vicki’s newest conversation and drama. Gina thinks it is so bad and desperately wants Kelly to know. She confronts Vicki and lets her know that talking to the girl Kelly got into the bar fight with was dirty. Naturally, Vicki goes on the defensive cuz that’s all she knows how to do.

While the other women bicker back and forth about what to do, Shan takes the bull by the horns and decides to tell Kelly right there and then that Vicki has been in contact with the girl at the bar. Vicki looks like she is gonna throw up. Vicki explains that she is scared of Kelly. I mean, the girl has gotten in bar fights. Vicki calls KELLY a bully and classless, while she is the one who spits mean words and calls Kelly a slut. What grown woman has that word in her vocabulary? Kelly calls Vicki a con woman and Vicki looks like her head is legit going to explode. Well, that escalated.

In the words of Vicki, she is “lit like a candle right now.” She leaves the bar with Shannon and Tamra. Whilst waiting for the Uber, Vicki screams that she was “conned and lied to” at the top of her lungs. I cannot tell if she is joking or serious.

The next morning, Kelly recalls the whole Vicki explosion with her posse, her crew, her girls. There is a very clear line drawn here and you can tell that Gina is super uncomfortable “siding” against the tres amigas.

The girls board the squeaky tiki, a tiki bar boat, and Gina gets stuck with Shannon and Vicki. They start talking about wedding planning as Tamra gets grilled by Kelly. Later, Tamra lets Vicki know that Vicki should really go say sorry. There’s a whole lotta no one minding their own business and a whole lotta yelling, particularly from Kelly’s camp.

When Kelly was on the phone with her ex-hubby, Michael, out of nowhere she screams something along the lines of, “I’m talking to Michael you f*cking pig” to Vicki. My goodness. I love how Vicki says she will never wear her pink dress again because of that. Um, I’m pretty sure that’s not what Kelly meant…

Braunwyn, Kelly, and Emily head out for dinner because Kelly can’t be around Vicki and the group has to be separated like teenagers. They eat Caesar salads and loaded cheese fries and talk about why Kelly insists on going so low. Kelly explains that she likes to win and learned to be vindictive from her mother. Sigh. I feel like I have heard this story before.

Gina has weaseled her way back in with the tres amigas for dinner, and with some prodding from Tamra, the ladies begin to talk about Matt, Gina’s ex. Tamra believes Gina should get back with him, but Shannon looks like she has seen a ghost. Shannon’s problem is that she relates everyone’s situation back to hers, but here’s the thing. Everyone is different. Shannon just has a hard separating herself.

Gina tries to have a moment with Shannon, because she is terrified of losing her friendship, and, after a whole lotta sob story from Shannon (what else is new?), the tres amigas + “a baby” go out on the town and get WASTED. I love how Vicki isn’t too sure about a drag show, but she can guzzle beer from the tap at a bar.

Obviously, the night ends with skinning dipping and I am LOLing when security comes and kicks the ladies out of the pool. And then I am really LOLing when Vicki slips and twists her ankle. Could there be a more uncoordinated person ever invented? Because Vicki LOVES attention, off she goes in an ambulance, but not before moaning, groaning, and screaming as if her leg was getting amputated. Always drama.