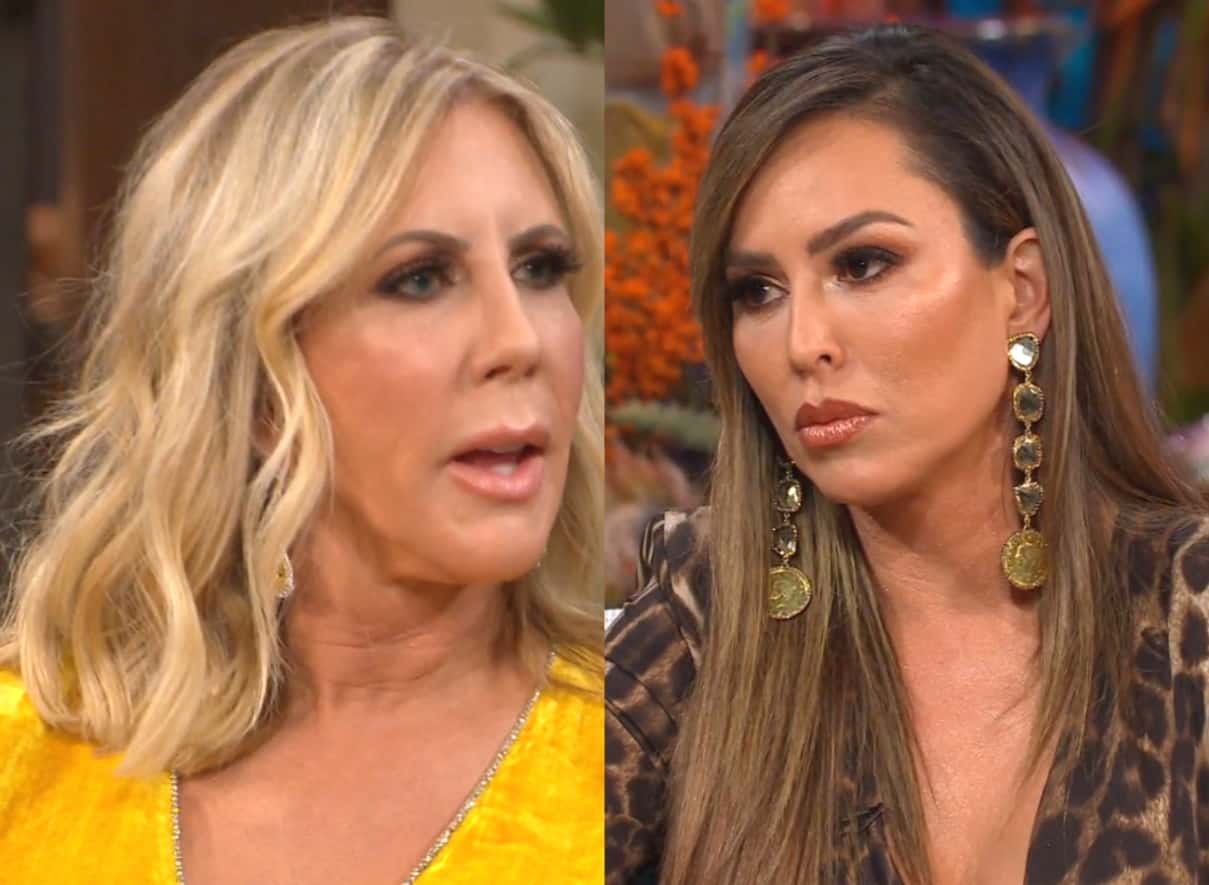 Hold onto your hats…it’s time for the Real Housewives of Orange County part 1 reunion.

The opening scenes are hilarious. Watching these women with no makeup on is borderline terrifying. I am fearful for the sh*t storm that is about to unravel because ya never know what you’re gonna get with these women…even after 14 seasons.

Andy welcomes all of the ladies and throws Kelly a fresh burn: “Did you take the train here?” LOL. He points out Gina’s “fifth hairstyle,” and for the love, it STILL does not look good. Emily is a straight up trooper — she had her hip surgery a few days ago. Wild. Loving the Miraval themed setting — perhaps it will induce some zen once things get hot?

Ah, fun Shannon. As we look back on her season, it’s a whole lotta ups and downs. Shannon is single and free, but not until she had to make it through the entire divorce trial. Seems like Shannon’s spousal support is pretty hefty — $10,000 a month?! AND evidently, that’s not enough for Shan.

She’s over the moon happy with John, her new boyfriend. I guess she followed Vicki’s idea of a vision board, as John is everything she has always wanted. The ladies confirm that John is a good guy and even go as far as saying she will marry John.

During a brief break, we get a treat. The camera heads into Vicki’s dressing room. She is currently fa-reaking out about her placement on the sofa when she finally makes her entrance on set. Vicki states, “Just let me go if you don’t want me anymore.” Talk about diva status!

Emily and Gina: a tale of two friends. These girls fought like crazy this season. Between Gina getting closer to the tres amigas and Emily “setting her up” with Shane’s cousin, things have been rocky. As of today, Gina explains that she gets “confused” about their friendship. Gina gets called out for telling everyone BUT Emily about her feelings regarding Emily’s Vegas dance number. Kelly and Braunwyn jump to Emily’s defense, and of course Tamra needs to interject: she calls Kelly a “dumb b*tch,” and thus begins a quick back and forth between Tamra and Kelly. Emily states that her “level of judgement was zero,” but Gina disagrees.

Cut to Vicki…still losing her marbles. She tells the producers and her poor, poor fiancé, Steve, “The show is going down cuz I’m not the leader. I feel like I’m the bottom feeder.” That’s what happens when you get demoted to “friend,” Vick.

Emily believes that she has seen a change in Gina since Gina has become buddies with the tres amigas, and Kelly adds that this is what the amigas do. They hate the new girl the first season, and then embrace her the next. Kelly explains that she is seasoned and so she knows their tactics. She states that Tamra and Shannon “burnt, cooked.” Ouch.

Emily offers to take a lie detector to prove that she had NO IDEA Shane’s cousin was taken. The fake date between Gina and the cousin never took place, and of course Tamra believes that Emily absolutely knew that she was setting Gina up for failure. In the end, it is clear that Gina and Emily are true friends cuz the girls embrace, cry, and forgive each other…yet again.

Vicki has entered the set. And she plops her a*s right next to Andy. The whole mood changes upon her entrance. Andy jumps right in and calls her out for her lawsuits. Vicki yells about not being a con-woman and if someone goes against her business, they are gonna get sued. Vicki is in the midst of a lawsuit, or two….um hello? Jane Ro?? Wow. Vicki has stooped to a next level!

“The woo-hoos were heard ‘round the world when Steve proposed to Vicki,” but it wasn’t always happily ever after for Vicki. We get reminded of her past relationships…Don, Brooks….oh boy, Brooks. Remember his cancer scandal? Vicki believes that she has learned a lot about herself and knows that Steve is THE one.

Emily and Tamra claim that Vicki’s brother, Billy, has been saying a lot of crap about Vicki’s engagement. Andy asks each of the women if they would still be with their exes if they weren’t on the show. All of the women believe that everything happened the way it should, despite being on the show. And Braunwyn speaks finally. Obviously, she talks about how strong her marriage is. Because that’s all she’s got to offer.

During the lunch break, Gina sits in Emily’s wheelchair and the ladies rehash the events. Over in Shannon’s dressing room, Shannon and Tamra talk sh*t about Kelly, whereas Kelly talks sh*t about Vicki. Vicki explains that the next time she goes out there, it’s gonna go down. Vicki has had some tequila during that break. Fabulous.

So, the Miraval trip. Shannon’s brilliant idea to take these maniacs to a wellness retreat. We all know it was a legit disaster. It was the opposite of zen, especially when Kelly hit Shan on the head. Andy wishes to hear about “the gong heard round the world,” and Shannon still holds that she was truly hurt. Kelly calls Shannon a hypochondriac and Shannon tells Kelly to “shut the f*ck up.” Kelly knows how predictable the tres amigas are and she reminds Shannon that she got hammered after the whole ordeal. Clearly, Shan’s injury wasn’t life threatening.

Shannon is not letting it go. She explains that she never turned to social media to call Kelly out, but Kelly went wild. The anger keeps building. This time, it’s between Braunwyn and Gina. A baby vs. little sister? Gina got p*ssed when Braunwyn called her the “little sister,” yet she allows the tres amigas to refer to her as a baby. I don’t get it.

Regarding the whole “accomplished woman” statement that Kelly spewed at Gina? Yea, Kelly states that it came out wrong. Somehow, that turned into a screaming match between the two sofas. Kelly thinks she is a businesswoman. Vicki does not. Tamra has seen her product on clearance. Blah, blah, blah. Even Andy can’t focus as the women bicker back and forth. It’s exhausting. Andy just wants to know why Kelly called Gina unaccomplished. Kelly admits she was wrong. Gina accepts the apology. And it appears as though the ladies have moved forward.

Emily def has her guard up with Tamra and Shannon. They are hard to trust. I can totally see how. According to Tamra, Emily went to the press and called the tres amigas bullies. Vicki jumps in and asks Kelly if she thinks she is a beauty queen, and Braunwyn believes that Kelly only calls Vicki a pig because she is pushed constantly.

Vicki goes ballistic. She begins screaming on top of her lungs at Kelly, “Get her off my show!” Braunwyn reminds Vicki that this isn’t her show. But alas, Vicki does not believe that. Vicki states, 15 years ago, she “started the show…season number one.” Vicki adamantly claims that the show wouldn’t be where it is now if not for her. Delusional much?