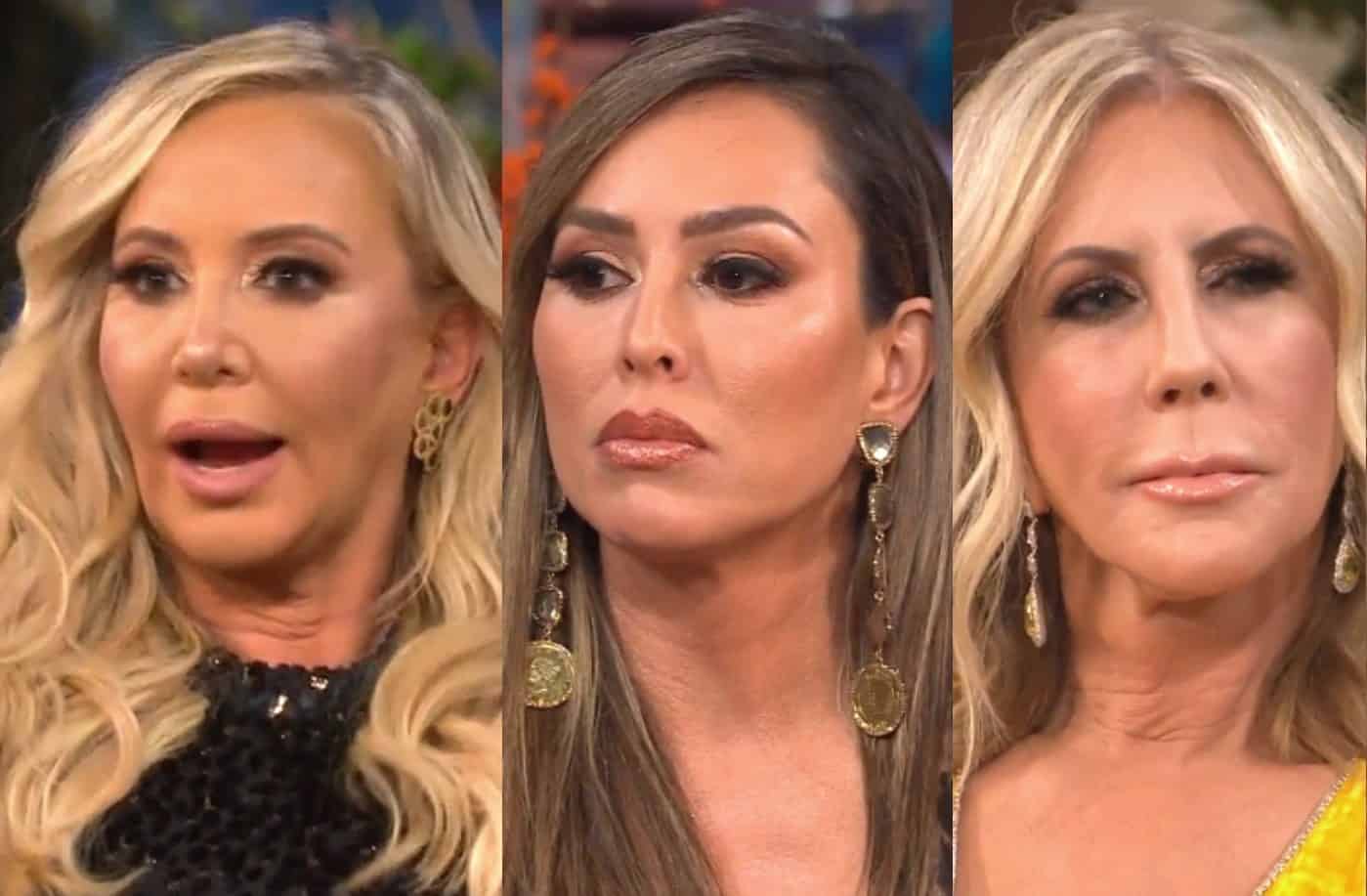 It’s part two of the Real Housewives of Orange County reunion, and it seems as though there’s little chance of these old wounds healing.

And we’re back to the reunion. Andy wants to know the ins and outs of the Vicki/Kelly “miracle in Miraval.” Kelly explains that they wanted to get back to their friendship, but Vicki always has soldiers waiting in the wings anytime Kelly behaves badly. Shannon makes it clear that she is tired of Kelly lashing out at everyone and spitting out curse words. “You sound like a frickin gangster.” Shannon and Kelly go at each other and it is clear that nothing is going to get resolved.

Andy takes the reigns and changes the subject to Braunwyn… and her 18 children. Hearing her laugh over and over again is painful and re-watching Braunwyn trying to rattle off her kids’ names is hilarious. Hold up — Braunwyn spends $4,000 a MONTH on groceries?! I can’t. Braunwyn chats about her child’s fashion show…and the debacle that ensued with Kelly.

I love it so much when Andy demands to know about Braunwyn’s husband’s statement necklaces. With a straight face, Braunwyn explains that the necklaces have been blessed and it’s the intention of them that he likes. Right.

Seeing Braunwyn’s mother pre-Betsey Johnson era is mind-blowing. Braunwyn explains that she hasn’t spoken to her mother in a few months, as things have become uncomfortable since filming the show. The break from her mother is meant to be healthy for everyone.

Another relationship that was strained this season was Tamra‘s sons, Spencer and Ryan. Tamra explains that the boys have been doing better since filming and she thinks that Ryan might be back with Sarah (his ex). Side note: I guess Tamra can call herself a businesswoman now, too, huh? Look at her producing CBD oil.

That’s a no-brainer. Watching her get herself involved in every little situation JUUUUST enough not to look like the bad guy is really impressive. We are back to the train rumor. Tamra can’t remember where she heard the train rumor FROM, but that didn’t stop her from spreading it about Kelly.

Instead of being mad at Tamra, Shannon defends her tres amiga through thick and thin. Emily states that she was “disappointed” in the fact that Tamra called her Shrek. And Andy calls it as he sees it: “Tamra, you seem like the bone collector this season.” I love how Tamra’s excuse every time is, “I was drunk and stupid.” She needs a new line. Kelly tells Andy that although Tamra is a sh*t stirrer, she can own it, whereas Shannon cannot. Kelly claims that Shannon “comes at” her and she is tired of getting attacked. Tamra jumps to Shannon’s defense and states that she is simply trying to be motherly. What is with these two defending til the death?!

Wait a minute! Shannon hired a private investigator to check Kelly out on her first year of the show? If I were Kelly and “heard” that, I, too, would be extra cautious around Shan!

I am silently mouthing “WTF” the entire time Shannon and Kelly bicker back and forth. Kelly makes it clear that she is not sorry for involving herself in the infamous Jim Bellino lawsuit case, even when Shannon cries that she has lost a quarter of a million dollars — aka $250,000 — over having to defend herself in the lawsuit. Kelly retorts: “It’s not my fault you opened up your mouth.” Kelly just wants Tamra and Shannon to take accountability.

As if we haven’t heard about Kelly and her enemies enough this reunion, Andy brings up the Vicki/Kelly feud. After re-visiting their relationship this season, I think it is clear to say that they are NASTY women who love a good rumor and who love to hurt each other.

Vicki, very calmy, reminds Kelly that she needs to be accountable for HER behavior, and yet Vicki deflects, deflects, deflects. Vicki has ZERO proof for many of the nasty rumors she spreads and continues to promise that her hands are clean.

After a whole lotta back and forth and a zinger between Tweedle-Dee and Tweedle-Dum, Gina finally says what everyone is thinking. There’s no getting Vicki and Kelly to stop until they are ready to throw in the towel because they are way too similar in personality. I love how Vicki vehemently states, “I am totally accountable for everything I do.” LOL.

Kelly, not understanding that she doesn’t have to hit below the belt anytime someone has something negative to say, spews out “You drunk,” directed to Shannon. We hear about Shannon’s two-year-ago blackout during her divorce. Shannon legitimately looks embarrassed and exhausted to have to discuss her dark times all over again. Thanks, Kel!

After all is said and done, Kelly claims that she wants Vicki to be happy. Seems like the anger management classes are working a little. Kelly and Vicki agree that they don’t have to be friends, but the ugly back and forth has to stop. Boy, I am exhausted. During a brief break, Kelly and Vicki hug it out (what’s this, the seventh time they’ve made up this season?). Here’s to hoping they end it for real because I can’t take much more back and forth.

Braunwyn states that the Florida trip was not quite what she expected. However, most of the women disagree and say that they had a good time. Well…everyone but Vicki. Vicki rains on Braunwyn’s parade by saying, “I just don’t feel like Braunwyn respects me.” Um. I guess Vicki forgot that Braunwyn gave her flowers for her engagement AND the biggest, nicest hotel room. That screams respect!

Braunwyn claps back by saying she doesn’t feel respected when Vicki calls her trash in articles. Vicki, becoming defensive and hostile, and she yells at Braunwyn, “Fifteen years, I started this show. Turn it down, Braunwyn.” Seems like Vicki isn’t accepting of Braunwyn’s lifestyle choices. Yet oddly enough, Vicki turns her head when Tamra partakes in many of the same attention-seeking behaviors. Odd…

TELL US – THOUGHTS ON THE RHOC REUNION?