Home Real Housewives of Atlanta News RHOA Recap: The Ladies Confront Yovanna on Being the Snake Who Secretly Recorded Cynthia

RHOA Recap: The Ladies Confront Yovanna on Being the Snake Who Secretly Recorded Cynthia 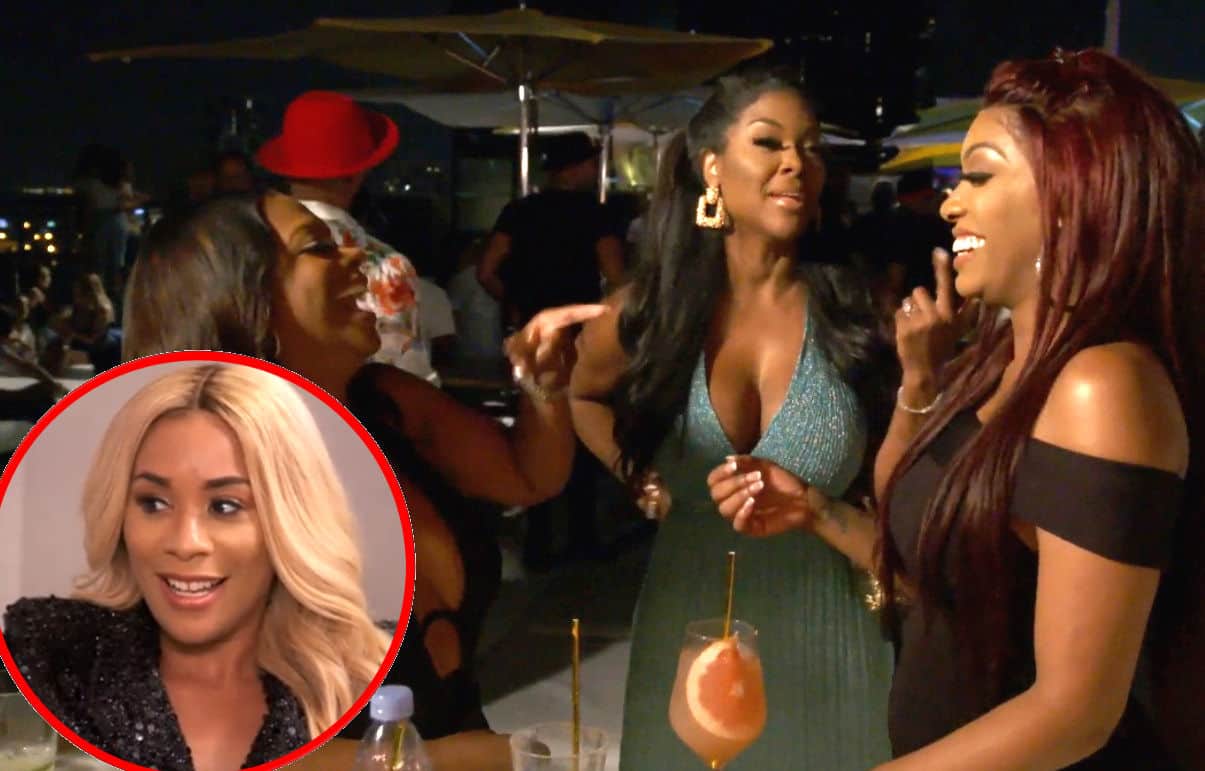 On The Real Housewives of Atlanta this week, the ladies are in Toronto for the Carnival.  Nene is back in the fold and they will be addressing their issues while hanging off of a building? What could possibly go wrong?

The episode begins with the ladies on the rooftop with cocktails. They are discussing Cynthia’s engagement. Nene claims she is sorry she missed it but it was  out of her control. It is interesting how Nene and Yovanna are referred to as the blonde sisters, which suggests they are actually friends. But really, they are more like partners in crime.

The ladies are headed to the King and Queen Showcase for Carnival. They all feel this event is in their wheelhouse. There is no drama this night for now, and it really looks like an amazing event!

Back at the hotel, we have a contractually obligated scene poor Kandi having to visit with Nene, Marlo, and Yovanna in her dominatrix outfit. They again rehash snake-gate where everyone is weighing in. While Nene chomps on her chips, Yovanna gets questioned regarding snake-gate to see is she is the guilty party. Kandi asks her if she did the recording, but she denies it. She slithered her way out of that one. Cynthia is discussing the situation where Kenya tried to rain on her parade by spilling Mike’s tea. Nene reminds Cynthia about how Kenya likes to blow a lot of people’s moments.

Tanya enters at this point looking all decked out in Chanel. Tanya calls Kandi KMZ because she remembers a lot they think she will find out where the bones are buried and who was the gravedigger. Kandi tries to question Nene regarding B. Scott’s blog. Nene claims she doesn’t leak anything to the blogs. Nene thinks Kenya is the leak because allegedly Cynthia “lost” the card and Kenya often leaks reports to the press. I have a hard time trusting anything she says since she constantly refers to herself in the third person.

In the morning, the ladies get to check out their Carnival costumes, which are really ornate and handmade. The ladies are a little apprehensive putting on these skimpy costumes except Tanya who only ate arugula for a week! Talk about commitment!! Yovanna has “bush” issues with her costume, and none of us need that visual. Nene, of course, has to leave the next day for a “comedy event” so she can’t partake in the celebration. On a side note, I am not feeling Kandi’s dark lipstick but she does look great in the costume.

Nene wants to chat with Eva and asks her if they can just move on. Eva was unhappy over Nene having her mic on when she was sharing a private issue last season about her ex. Eva thinks Nene wasn’t remorseful and she had to see her deception on TV.  Come on now, Eva is just finding out NOW Nene is all about Nay-Nay, Linnethia, and Nene Leakes only.? What does Nene do? She, of course, blocks her on Instagram instead of being accountable. Maybe she needs an accountability coach? Call Teddi Mellencamp, pronto!  She actually apologizes to Eva. Is Nene on an apology tour? Kenya thinks Nene is lonely on her island and that is why she is making nice now.

Tanya attempts to get the ladies to participate in a “team-building exercise” by scaling the Toronto CN Tower? It is actually more of a suicide mission if she thinks this is going to unite them as soul sisters. I wouldn’t stand too close to the edge unless I had my safety harness secured!

The ladies literally go out on an “edge walk” — minus Eva and Nene who are watching from the inside. The other ladies are 1,168 feet in the air walking on the ledge. Nene has a panic attack screaming like a lunatic just going up the elevator while Eva is not doing it because she is pregnant. I have to say Kandi and Tanya are pretty bada** doing all of the things the guide is encouraging them to do. Kandi says she is a real thrill seeker and an adrenaline junkie. Kandi thinks it was just like another day — no big deal.

Nene tells Eva she is still upset over the “closet incident” and how Porsha reacted publicly to Nene’s actions. She didn’t like that Porsha showed the world who she really is by sharing her nasty texts. Busted Miss Leakes,  we saw your nasty shade!

Porsha gets “dog-gone it, I’m sorry” flowers from Dennis. Dennis should have left out the word “dog” in his apology note. Mentioning a dog isn’t wise in an apology note when he got in trouble over his dog in someone else’s bun in the first place! Paul, Tanya’s fiancée, and Dennis who “supposedly” are friends arrive at Tanya’s hotel room. Dennis brought Porsha’s bling back so he can get more nookie he can get his lady on her back again. Dennis thinks pulling that ring out of his pocket is going to do the trick.

They all impersonate each other on the shuttle to the pre-Carnival cocktail party on the bus. Was this a theme on Real Housewives this year since RHOC and RHOBH did the same thing? The ladies all take it in good form, but they find Yovanna’s impersonation of Porsha as super creepy. Unfortunately, there is a lot of Yovanna in this episode with her bad blonde wig. She has such a sinister presence in each scene, which is why she is most likely the snake!

Porsha, Kandi, and Kenya are investigating snake-gate and they are all acting in different “cop roles.” They think Yovanna is almost ready to give it up about who did the recording of Cynthia. Yovanna claims there is a lot of “foo foo” going on, which suggests they are not real. Yovanna claims she knows who the culprit is. Hiss, I am looking at you, girl!

Cynthia thanks Nene for the platter and her card. Nene compliments Cynthia on her bling. Tonya then says some crap about love and introduces Dennis as a “special guest” to surprise Porsha? Hmm, there isn’t anything special about him other than his hot dogs. The scene ends with Dennis going down on one knee…

Next week, we have Toronto Carnival and a total sh** show that becomes a brawl between most of the ladies, and unfortunately, more crew members are involved…