Vanderpump Rules Recap: Stassi Lashes Out at Sandoval After He Sends Her Rage Text 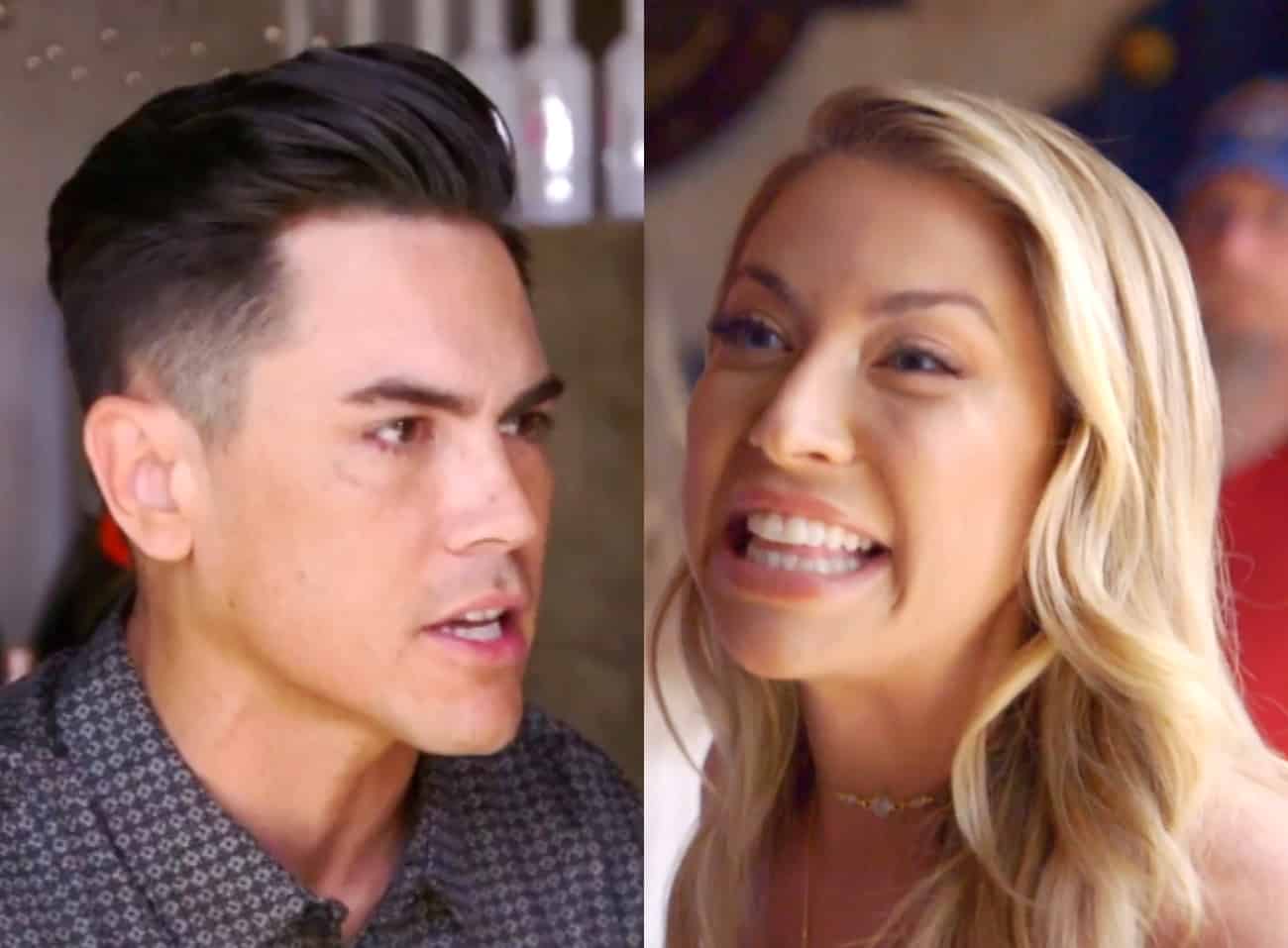 Setting the record straight turns out to be quite difficult on this episode of Vanderpump Rules.

Yay! Stassi ‘s little brother, Nikolai, aka the real MVP of Vanderpump Rules, is back! Oh. And so is her b*tch of a mom. Turns out that Stassi took a year break from her mom after her mom nearly ruined her relationship with Beau last season. Man, that was awkward re-watching that, huh? The fam is in town cuz Stassi is wrapping up her book tour at TomTom and it’s a celebration.

Ok. So what is with the new girl, Charli? She has never had pasta in her life?! How can I possibly take her seriously? Danica is back to SUR after her week-long suspension, and I feel like I need a graphic organizer of all these new people. Danica introduces herself to the new girls, Charli and Dayna, and then Scheana storms in, all decked out and ready to rock. She is on a mission to find Max and give him a piece of her mind. Homegirl is still p*ssed that Max called her boy crazy, even though it’s totally true.

Scheana finds her way over to LVP and spills her recent life story. She is still reeling over Max’s comment to Brett, and the more Scheana cries and talks about how upset she is, the more it makes her look absolutely bonkers. LVP tells Scheana to take a little break from boys, but that’s like telling a cow not to moo.

It’s boys’ night! The whole group of guys gets together and they all meet Brett. And not too soon after some chit-chat, Max and Brett just continue their Scheana bashing and it’s cringeworthy to hear. They go back and forth exchanging stories and Max claims that the whole Scheana issue is “too much” for him to deal with. Max just wants to see Dayna and not feel like Scheana is trying to sabotage any future romantic relationships he may be involved in.

Sandoval is beyond annoyed with Stassi about her upcoming book party. Apparently, Stassi hasn’t asked him for any input to plan the event. Instead, she solely worked with Schwartzie, so essentially it’s like the blind leading the blind. Because Sandoval is hurt, Stassi is likely to feel some backlash.

OMG. Why does Scheana show up to guys’ night? I am 1,000% experiencing second-hand embarrassment for Scheana as she asks the other boys for a few private moments with Max. Like, doesn’t she know that the minute she leaves they are just gonna straight-up bash her? I admire the fact that Scheana wants Max to know that he hurt her feelings. Still, there’s gotta be another way to handle the situation.

“I like attention from guys. I wouldn’t say boy crazy.”  You are CERTAINLY not crazy, Scheana. Reading text messages that Max sent you in the past is def not crazy. I can’t even. Max is forced to apologize for leading Scheana on, and Scheana is not satisfied as Max still defends Dayna. I am unclear why Scheana is so concerned about Max’s current relationship with Dayna, but hey, at least she’s not crazy, amiright?

Ah, the life of LVP. Can we just talk about her closet? Her luggage. All of it. She is off to Boston, so she will be missing Stassi’s book signing event, but the show must go on. Well…maybe. Stassi wakes up to a rage text from Sandoval, which seemingly came out of nowhere. He writes at 2 a.m., “Do not put this on us because I will literally kick you the f*ck out of TomTom.” Wait, what? Beau suggests Stassi screenshot the text and send it to Schwartz because he has been Stassi’s contact. Welp, the party might be a little wack now…

I love how Scheana has a sweatshop going on in her apartment. Naturally, Scheana needs to hem the new dresses for SUR even shorter and so do Charlie and Danica. Luckily, Scheana’s random friend knows how to sew, so as she hems the dresses, the girls gossip.

Danica explains that she slept with her ex-boyfriend and I just wanna know WHY DOES EVERYONE HAVE THE SAME NAME???

Later, Dayna and Brett sit down with Nathalie, LVP’s business partner. They discuss training, and once Nathalie exits, Dayna talks to Brett about how Scheana has been mean to her throughout training. Brett lets Dayna know that he friend-zoned Scheana, and with that, a fast friendship seems to have formed between Brett and Dayna.

It’s the day of Stassi’s book event, and Schwartzie explains there was a bit of a scramble to get everything all together. Interesting how a SPIDER came and bit Sandoval so he can’t even be there for the start of Stassi’s event. After all that…

The turn-out is pretty great, despite any snafus that may have occurred, and all is going well…until Sandoval meanders in. Sandoval justifies his angry 2 a.m. text because he cannot believe that Stassi didn’t come to HIM about logistics. He basically insinuates that Schwartzie is a moron (which he kind of is, but at least he is NICE) and Ariana just blindly backs her man.

Katie gets involved, and with that, we have a couples’ fight. Sandoval comes at Katie hot and he tells her to “get the f*ck out of here.” Schwartzie attempts to gain control of the spiraling situation. Speaking of spiraling, Stassi storms over and confronts Sandoval. She yells in his face that he is a “selfish, egotistical piece of sh*t.” Stassi loses her mind on Sandoval and she puts on a GREAT show for her “fans.”

Sandoval tries to belittle Schwartzie and Sandoval leaves after being “disrespected” by Stassi. Stassi apologizes to Schwartzie, who is def on HER side, but a line has been drawn for sure.

During training at SUR, Dayna “touches base” with Scheana and checks to make sure there is nothing going on between her and Max. Scheana becomes extra snotty, but Dayna makes it clear that she feels the tension between her and Scheana. Dayna does not appreciate Scheana making her feel like “another notch on Max’s bedpost,” but Scheana warns Dayna to be careful with Max. Eyes rolling.

The next morning, Schwartzie needs to hash things out with Sandoval. Sandoval is so extra, but Schwartzie knows he has to fix things with him, considering they are leaving for Jax’s bachelor party the next day.

Sandoval…what.a.rat. He calls LVP and talks to Ken, Lisa’s husband. According to Ken, Sandoval was “spitting blood” as he explained what happened at the book signing. LVP is P*SSED upon hearing this news and needs to get to the heart of this problem.

When Schwartzie confronts Sandoval, they don’t really get anywhere. Sandoval reminds Schwartzie that Stassi humiliated him in front of a group of people in his OWN restaurant. “Nobody yells like that to anyone, especially me.” Sandoval furthers states that Stassi will be banned from TomTom from here on out. Period.  The Miami bachelor party should be EXTRA fun now, no??