Vanderpump Rules Recap: James Kennedy Blows Up on Raquel and Scheana Denies Being Jealous of Dayna 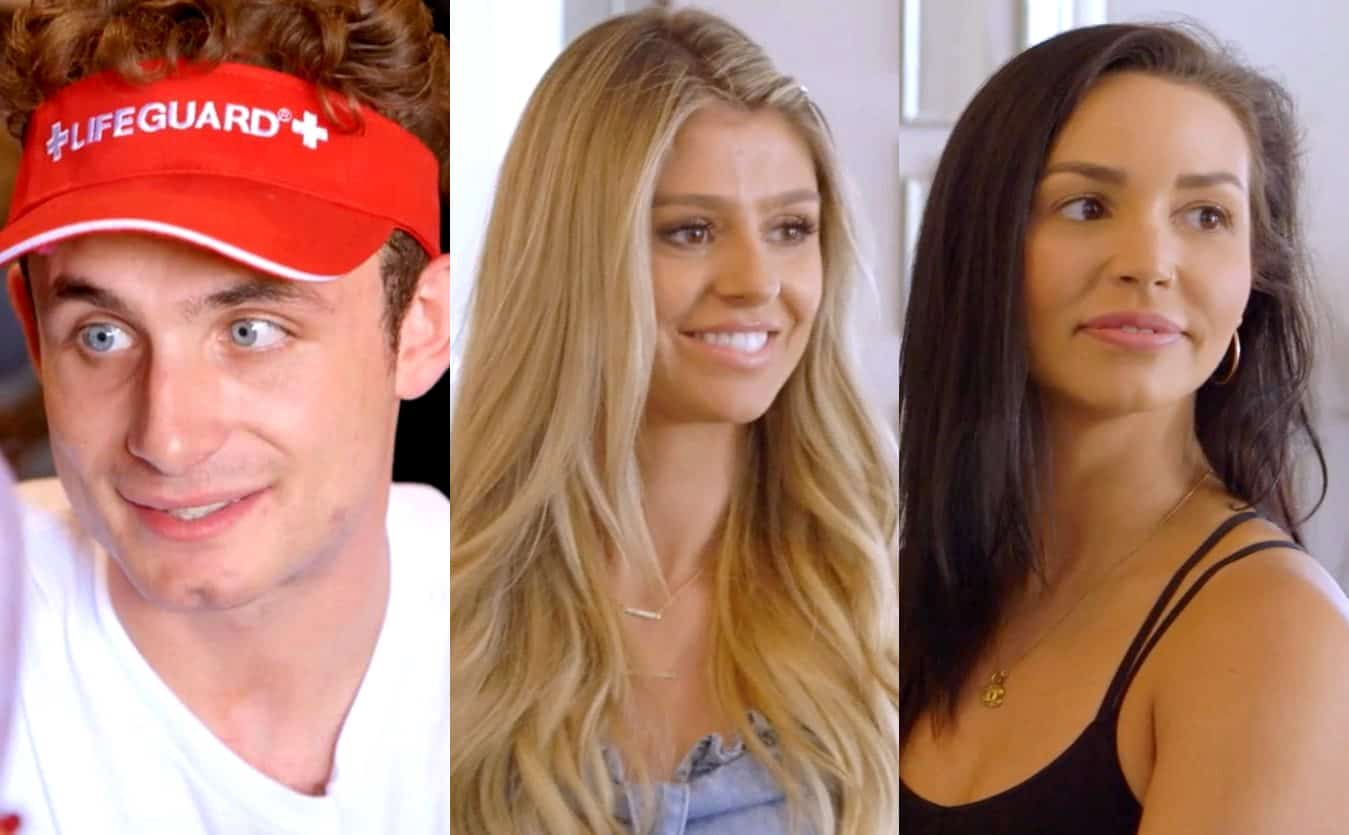 Unfortunately, the Miami trip has come to an end and it’s back to “reality” for the crew on this episode of Vanderpump Rules.

Sandoval will never quit it with his bedazzled, costume-like looks. The pride get-up is quite impressive, I mean, did you get a load of those rhinestones?! Whilst visiting Katie and Schwartzie, Sandoval discusses James Kennedy’s DJ gig at TomTom for pride. How many chances does James get? Asking for a friend…

Danica, Scheana, Raquel, and Brett head over to LVP’s palace for pride prep. LVP calls Scheana out HARD when it comes to Dayna. She wants to know if Scheana’s ‘tude toward Dayna stems from jealousy. LVP isn’t buying the whole ‘Max is my friend’ schtick Scheana is trying to pull off and Scheana isn’t doing a good job of proving her point. Anyone who keeps repeating they aren’t jealous of someone usually IS…Scheana claims that everyone is pushing Dayna on her, so that makes her want to push Dayna further away. Eye roll…

Ariana also comes to Villa Rosa, and before she heads out to help with the pride posters, she continues her discussion about depression with LVP. The ladies have a bond when it comes to depression and they talk about how suicide has popped into their minds before. Scary stuff. LVP sees this as a great opportunity to invite Ariana back bartending a few nights a week to try and keep her spirits up.

Later, LaLa, Stassi, and Brittany talk about how they aren’t actually working during this pride parade…as if they EVER did…and they also discuss everyone’s favorite DJ. You guessed it…James. EW. James in his robe makes me wanna gag. Raquel is just as shocked as the rest of us that Schwartzie is allowing James to DJ at TomTom.  The couple forces some conversation and Raquel asks James how things have been with LaLa. Remember when we thought LaLa and James were friends again? Sike…not anymore. James can thank Fifty Cent for the demise of his friendship with LaLa. Apparently, James decided to post a joke about Fifty’s infamous feud with LaLa and her fiancé, Randall Emmett, which made LaLa very upset.

The next day, we are treated to Max sleeping in Dayna’s bed and Dayna getting essentially bullied by Scheana and her posse. What else is new? Now Dayna can’t get her hair done for pride with Raquel because Scheana has decided to come. Real mature…

Danica is really dropping the ball, huh? Homegirl is managing SUR, yet somehow, they are down bartenders and short staff on their biggest day. Way to go. Jax is salty that he isn’t on a float, but instead has to work. Suckaaaa. Everyone is in place ready to roll — the Toms are in their ridiculous ensembles, Ariana has her bi flags, and James is setting up for his big set.

Meanwhile, back at SUR, Jax “re-meets” Dayna. He somehow forgot he met her last year, but alas, Jax doesn’t remember what he says to two different people, so can ya blame him? The two bond and high five as Scheana and Raquel bond over NOT having Dayna at the pride getting ready event.

Over at TomTom, James makes his way over to LaLa and the group. He asks to talk to LaLa to attempt to clear the air….for the 17539th time.  Hmmm…interesting that James calls himself sober, especially when he asks Max for something to drink with a little bit of “something” in it. LaLa ain’t buying it, but she does accept his apology…yet again. LaLa believes that James has a true addiction problem, but if the guy isn’t willing to help himself…

Is it me or is this parade pretty underwhelming without the OGs? Sigh. Bring back Scheana’s “Good as Gold.” I kid. Post parade, the Toms make their way to TomTom and make a (wanna-be) Rockstar entrance and James starts spinning. Except, there’s one problem. Raquel missed James’s entire set due to some of her work responsibilities and that makes James feel some type of way. And just like any good boyfriend would, James decides to call Raquel to unload on her!

“Hey, go f–k yourself! How dare you miss my whole set?!” James shouts at his girlfriend on the phone. “What the f–k is wrong with you?!” Poor Raquel simply tries to defend herself by telling James he hadn’t told her what time he would be performing.

The Toms make their way over to the queen of pride, LVP, and naturally begin ripping shots cuz, why not? Speaking of shots, James looks WACKED out of his mind. Earth to Raquel. She finally shows up to TomTom. Perhaps she should take the goggles off of her head because apparently they are cutting off circulation to her brain, and therefore stopping her from realizing her boyfriend is WASTED.

Also. Raquel just straight up didn’t go to work?! What kind of job does she think this is?! I guess when James cries, she runs, much like a mother would run to her baby… When LVP realizes that Raquel isn’t at her SUR shift, she becomes confused and then annoyed. And when she realizes that James had been drinking, she becomes concerned.

When Peter confronts Raquel when she eventually rolls up to SUR, she claims she “lost track of time.” I love how James steps away from the bickering because he had “a great set at TomTom,” as if that has anything to do with what these two are discussing. Peter really gives Raquel a hard time, as he should, but obviously, she gets let off the hook with just a warning.

Sandoval reminds all of the drunken patrons that he is a PARTNER of TomTom as Schwartzie looks on with a dumb look on his face, as usual. The night wears on and things get sloppier by the minute. Scheana is singing (I guess you can call it) her top hit “Good as Gold,” but she manages to take a break to chat with Dayna about things.

She takes a few hits of her inhaler as she talks to Dayna about their differences. Dayna straight-up asks Scheana, “Are you 34 or are you 16?” BOOM. Scheana behaves like a mean middle schooler and Dayna has zero tolerance for it. As Scheana attempts to explain her thought process, she sounds more and more like a dork. Dayna just wants to make friends and can’t wrap her mind around why they can’t all be friends.  Scheana cries about hormones and birth control and repeats that she’s not a bully. Dayna hits her with the “don’t talk about it, be about it” and remains stoic. Get it, girl.