RHONJ Recap: Danielle Reveals Teresa Was Behind Hair Pull! Margaret Storms Out of Dinner After Argument with Jennifer 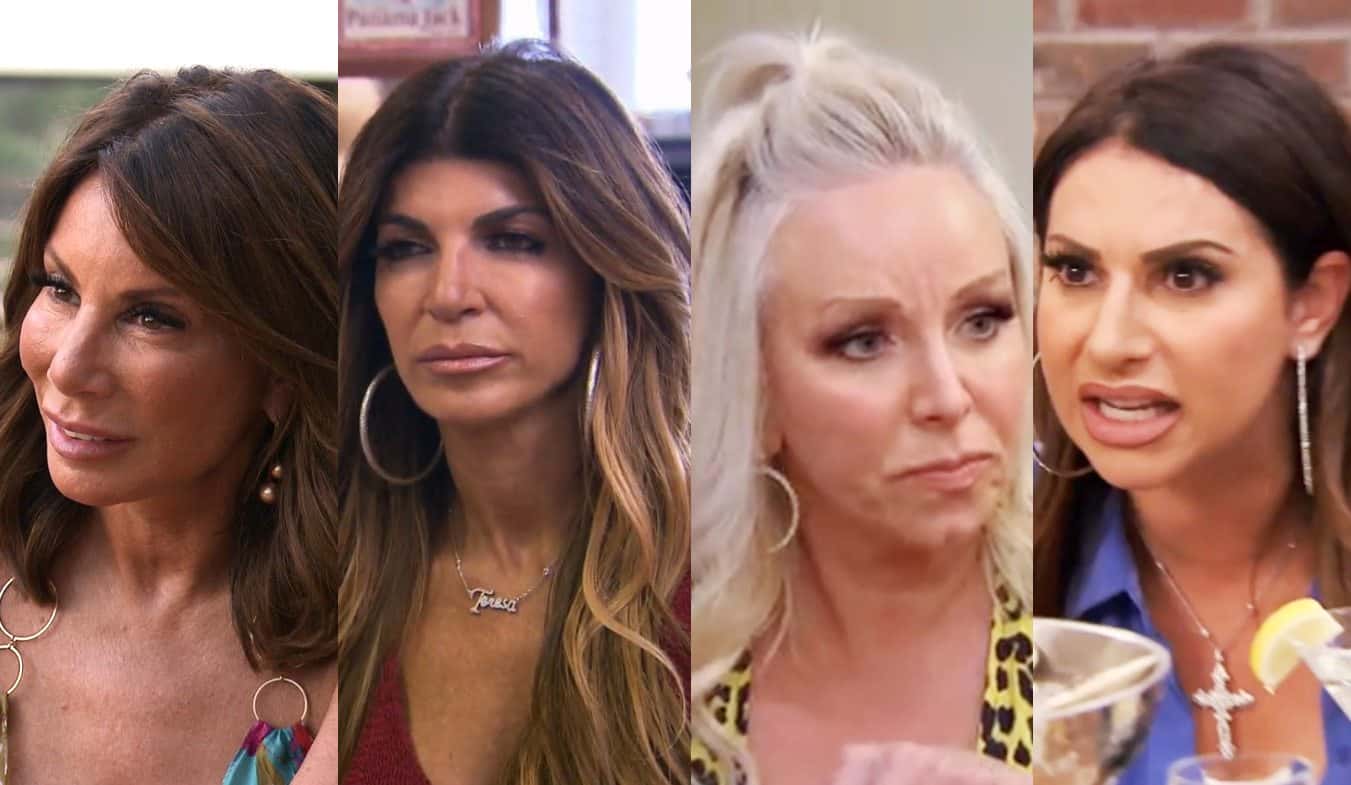 On this week’s episode of The Real Housewives of New Jersey,  Danielle shares her truth about who was behind the hair pull. She is pointing her finger right at Teresa! Wow, maybe now Teresa will open her eyes to this viper’s vindictiveness…

Evan finally arrives so they head out to the Jersey boardwalk. The drinks are already flowing so this should get interesting. I hope it doesn’t get too windy since Margaret doesn’t want to flash her puss since she never wears panties. TMI.

Joe G. asks Dolores again, “Where is your boyfriend?” She claims he is working. He thinks the man standing behind her should be her soulmate, which is Frank. Frank says it can’t happen since he can’t give her what she wants. He just can’t keep his member in his pants.

The group encourages Dolores to kiss Frank. She is reluctant to do that since she has no idea where those lips have been. It reminds me of spin the bottle and how awkward that could be. Joe G. kisses Frank with more passion! I believe now there is nothing going on between these two #fakestoryline.

It is a bit foreshadowing when even Bill is ordering drinks. I get the impression he is a light-weight drinking and won’t be able to keep up with this crew. Keep drinking those Bloody Marys, Dr. Bill, and let loose!

Joe and Melissa take a romantic stroll on the beach and reflect on their past at the shore. Joe thinks they are lucky to have each other. He says very sweetly, “I have loved you for 15 years.” Let’s have a collective awe… It saddens him that Teresa doesn’t have that #selfinflicted.

They discuss having another child and Joe thinks their family is perfect just the way it is. Move on from that ridiculousness and enjoy what you have got!

Evan and Bill go off to play carnival type games on the boardwalk. They seem to be having a good time competing against each other. Bill seems a little tipsy and wants to make Evan his bit**.  Okay, I wouldn’t go that far, Dr. Bill, but good for you for letting loose a little bit.

Jennifer tells Teresa while shopping that Margaret is mean-girling her. No, she is calling you on your bullsh**.  Dolores keeps hopping on and off the fence between this disagreement between Jennifer and Margaret. Pick a side, Dolores!

All of the couples head out to dinner and they are turning it up with the cocktails. They arrive at the restaurant and it is raining. Is that a prelude to stormy weather ahead? I like the bromance forming between Dr. Bill and Evan. They both seem like mild mannered guys .

They discuss what they are all doing the next day. We have these options: deep sea fishing, mini  golf, parasailing. Sign me up for parasailing!  It is the best, but wait, not with Dolores, Teresa, and Jennifer…

Melissa shares with the group that she is meeting up with Danielle. She is going to tell her they are done with her thug behavior. Teresa, who has no moral compass, still can’t comprehend why they can’t give her a pass. The other ladies are apprehensive about that meeting and rightfully so.

Jackie challenges everyone at the table to a beer chugging contest. Jackie has chugging game and wins. Leave it to Jennifer to mention that Jackie doesn’t do blow jobs but she can sure suck down a beer. She is just one of those people that has zero filter and just can’t keep those big duck lips shut. Somehow, Teresa makes this disagreement about herself since it started with her discussion with Margaret. No, this has been brewing for a while, sweetheart. Take a seat, everything is not about you!

Margaret and Jennifer go at it about the whole stay-at-home mom thing. Jennifer insults Margaret’s mothering skills. You better back that a** up . Margaret refuses to take advice from a woman who has never worked a day in her life or cared for her kids by herself. Preach!

Margaret tells her, “The only achievement you’ve had is marrying someone rich. Mic drop! She and Joe exit stage left. Jennifer, of course, has to make it about appearances and insults her Fred Flintstone outfit as she is walking out. She is definitely bringing her nasty game this season to keep her housewife status.

Jennifer whines, “Why is everyone always coming at me.” Maybe you should get off your arrogant throne and take that Chanel stick out of your a**.  Dolores think Jennifer’s issue is she needs to know her audience? Really? Who would take advice from Dolores?  I wouldn’t consider how she conducts herself as wise either. I think better advice is to have Dr. Bill sew her mouth shut so this crap stops spewing out of it.

The guys are going deep sea fishing on the Old Salty II. The shots are being poured and everyone is partaking. Joe Gorga dares Bill to prove his manhood by doing some shots. The guys are going to turn Bill into a Guido by the end of the day. They decide on calling him Tony the Turk. I like it! I have to say these guys know how to have a drama free time.

Dolores, Jennifer, and Teresa go parasailing. There are life preservers and rafts they should be good. Wait, unless there are sharks, nah, they will just swim past that mess. Sharks even have standards, you know?  Jennifer starts burping because she claims she does this when she gets nauseous? I just think she has to keep the focus on herself. Quit being a bunch of crybabies, just enjoy the view!

Melissa, Margaret, and Jackie go mini golfing. Margaret doesn’t like this very much. She thinks hanging with Jennifer is like waxing her vagina with molten lava. Good reason to golf! Melissa talks about meeting up with Danielle and how she is walking into the lion’s den with that one. The only support Danielle has left is Teresa. Margaret thinks Teresa is like low hanging fruit to Danielle and is too vulnerable.

The six ladies are meeting up for lunch. Jennifer comes from the restroom in her stupid “Sorry not Sorry” shirt. I just can’t with this one #attenionwhore. They discuss the party that evening at the house. Melissa has to go see Danielle. Stop mentioning it, just go for God’s sake! In her ITM, Teresa does her whole “I am not going to let anyone tell me who to be friends with spiel.” Blah, blah, blah.

While in the car, Bill looks like he has been overserved. They have to carry him back into the house. He looks like he has just been hazed by his fraternity brothers. Bill is left in the room to sleep it off and hopefully not have a hangover. He must be hallucinating since he is massaging Joe G.’s boobs. Okay, Dr. Bill, you are cut off!  I guess he can’t hang with these partiers.

At the meeting, Danielle is incredulous why she is on the outs with this group. She felt Margaret thinks she is disposable. Basically, Melissa tells Danielle you can’t play in our sandbox anymore because no one likes you. Danielle asks if Teresa feels that way. Melissa thinks that Danielle is a bad influence on poor pitiful Teresa. You can see Danielle’s eyes narrowing over that info.

Danielle claims she was encouraged by the shop owner, Steven, to pull Margaret’s ponytail and Teresa said “do it” too. Boom! Teresa will now be getting a taste of Danielle’s vindictive side.

Next week on the season finale, Teresa is faced with what Danielle shared and she is not a happy camper. Teresa and the girls are going to Italy to see Joe! This finale should be explosive and emotional, can’t wait!