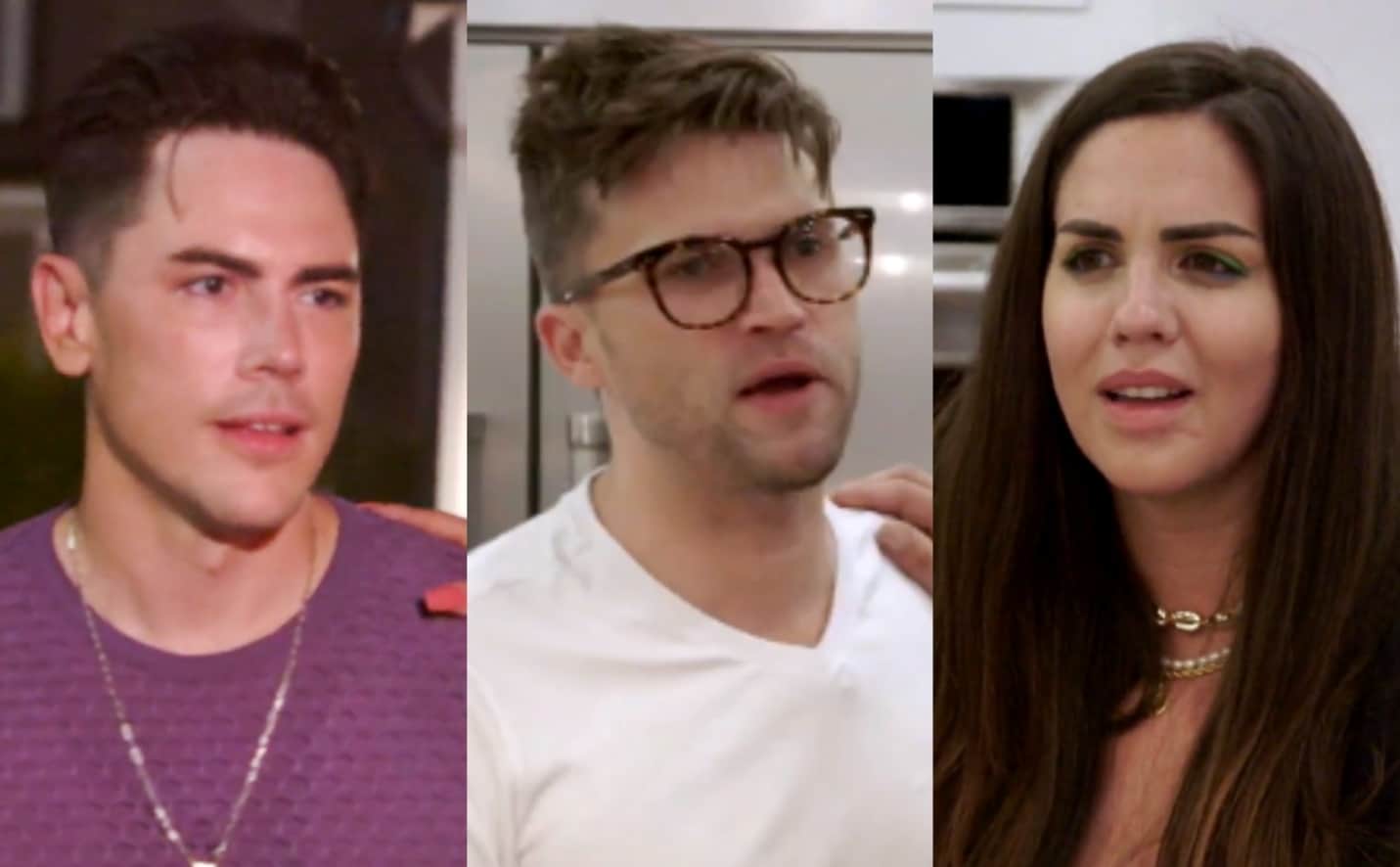 On this episode of Vanderpump Rules, does a prank go too far?

Over at Stassi’s apartment, Katie comes bearing provisions…aka…a hangover pack of fast food…Katie’s specialty. I guess they got super extra at Sandoval’s birthday party the night before.

Meanwhile, Raquel can’t shake LaLa ‘s confrontation from last night. Raquel was told James was drinking at a recent party, but James swears that just wasn’t the case. I mean, he’s been sober six days and LVP calls James every day to check in. That’s incredible. She really is such a gem of a person and if he messes up this time…sheesh.

Stassi and Katie talk about their upcoming girls’ night and they rattle off the names on the guest list. Legit every female that ever had 10 seconds on Vanderpump Rules is invited… EXCEPT Kristen. Ouch.

So, Jax is FORTY. A bartender at SUR and turning FORTY. Yikes. It’s sad to see that the maturation never really happened for Jax. It also never happened for Scheana. While on break (from NOT working…), Scheana and Raquel touch base. Raquel gets invited to Katie’s girls’ night and Scheana is excited Raquel made the cut. (Sorry, Kristen!)

Ok so, Brett is filming a YouTube video with Scheana? I can’t with this guy. Let’s be real. He actually has a channel where oodles of women follow him because they love his abs. Scheana does not understand how Brett couldn’t want to hook up with her, and even though Brett tells her straight to her face he isn’t interested, Scheana’s pretending not to hear.

Max, Sandoval, and Schwartzie (the newest tres amigas?) talk about how it’s Jax’s birthday and perhaps they should just act like adults and TP Jax’s house. Schwartz knows it’s a terrible idea and refuses. Max feels SO cool that he is able to hang out with the Toms and tags along with Sandoval to TP Jax’s house. All I can think about right now is how they are wasting SO much toilet paper during this pandemic when toilet paper is few and far between…

Brittany thinks the toilet papering is hilarious cuz she laughs at anything. She shrieks and giggles, but Jax, Jax is p*ssed. He tries to use all three of his brain cells to figure out who did this to his house. When he calls Sandoval, Sandoval does such a great job of lying that Jax will basically never find out the truth.

Later, Brett gets set to interview Scheana for his YouTube channel. He forces her to back away from him on the sofa, which is hilarious. Then, he proceeds to offend Scheana left and right over the course of the 32-second “show.”  Brett states: “She’s a middle-aged woman who has been around the block.” LOLOL. He is on a roll, especially after he asks Scheana if she is a “f*ck girl.” I am sure Brett’s followers are gonna love this.

LVP has to leave for London for her mother’s funeral. Before she goes, she phones James for a check in call. LVP wants to know how James is doing and reminds him that although she will be in London, she will know if James slips up.

Katie, her crimped hair, and Stassi prepare for girls’ night. Kristen finds out about the wine night at Katie’s through Scheana. Kristen calls it “precious” that she wasn’t invited and becomes livid upon hearing that everyone and their mother was invited, minus her.

Wine night is in full swing. Everyone comes donning wine bottles except for Scheana…she brings some string cheese. Classic. As the girls cheers to wine, the boys celebrate Jax turning 40 at TomTom. For his birthday gift, Sandoval and Max let Jax know they were the TP culprits. Jax uncomfortably laughs but just looks confused. Poor guy.

Back at the girls’ night, LaLa wants Raquel to stay in her lane so that LaLa can “run sh*t.” LaLa confronts Raquel and tells her that at the party the night before, she really didn’t appreciate the way Raquel spoke to her. This turns into some back and forth between the girls, and I am happy to see that everyone AT the party looks just as confused as I do. LaLa goes into Raquel and reminds her that she is “a Michael Vick fighting dog.” That sounds like a threat to me! (Sidenote. Did anyone see Dayna snitching food from the pot on the stove behind Raquel? Hilarious!)

The next day, Raquel shares with James how she argued with LaLa a bit and things got awkward. She is driving James to his one week AA meeting and I am happy to see he is sticking with it so far.

It’s Jax’s themed fortieth birthday party. Ya know, the guy who refuses to dress up for everyone else’s parties! Evidently, the ’80s isn’t really a “theme,” according to Jax, because the ’80s is OBVIOUSLY his jam. The Toms gift Jax these incredibly thoughtful (and gross) gifts and that’s true friendship if I ever saw it. Speaking of friendship, Kristen is a guest at this party and she gets Brittany’s ear. She goes on and on about Katie and Stassi and it’s exhausting.

How ‘bout Rand? He’s got prank cop cars outside of Sandoval’s house for the afterparty. The story is that he hired these cops for Jax’s birthday. No, not as strippers! But to fake-arrest Sandoval for toilet papering. They’re gonna call it a vandalism charge. Jax loves this plan so hard and is as giddy as could be. Rand is thrilled that he is part of the group and that he made this hilarious secret come true.

As the after party rolls up to Sandoval and Ariana’s house, the “cops” follow suit.  No one is even paying attention as the acting cops bust into Sandoval’s house.  LaLa does her best to draw everyone’s attention to the situation as Sandoval gets handcuffed and thrown into the back of the cop car. I have to tell you, it looks pretty legit.  Katie becomes upset by all of this, and finally, after Sandoval most definitely sh*t his pants in the car, Rand jumps in and lets everyone know they’ve been punked. Jax hops up and down and reminds us “this is why Tom Sandoval will never be the number one guy in the group.”

Katie does not find this funny at all and she makes her opinion clear. Luckily, Sandoval is taking this prank like a boss and feels honored to have had it happen to him.  Whatta weirdo.  Katie thinks the whole “joke” was in poor taste and won’t drop it. A drunken Schwartzie tells Katie to shut up and states he has never been more turned off by Katie in his life…in front of everyone at the party.  Talk about awkward.

Things get really bad when Schwartzie then states, “That’s why I don’t have sex with her.” YIKES. Everyone is trying to shut Schwartzie up, but he cannot be stopped.  This isn’t the first time Schwartzie has treated Katie like this…and it makes me think…maybe it’s a good thing their marriage isn’t even legit, huh?