Home Real Housewives of New York City News RHONY Recap: Dorinda Packs Her Anger and Unleashes it on Leah and Tinsley, Later Breaks Down and Cries

RHONY Recap: Dorinda Packs Her Anger and Unleashes it on Leah and Tinsley, Later Breaks Down and Cries 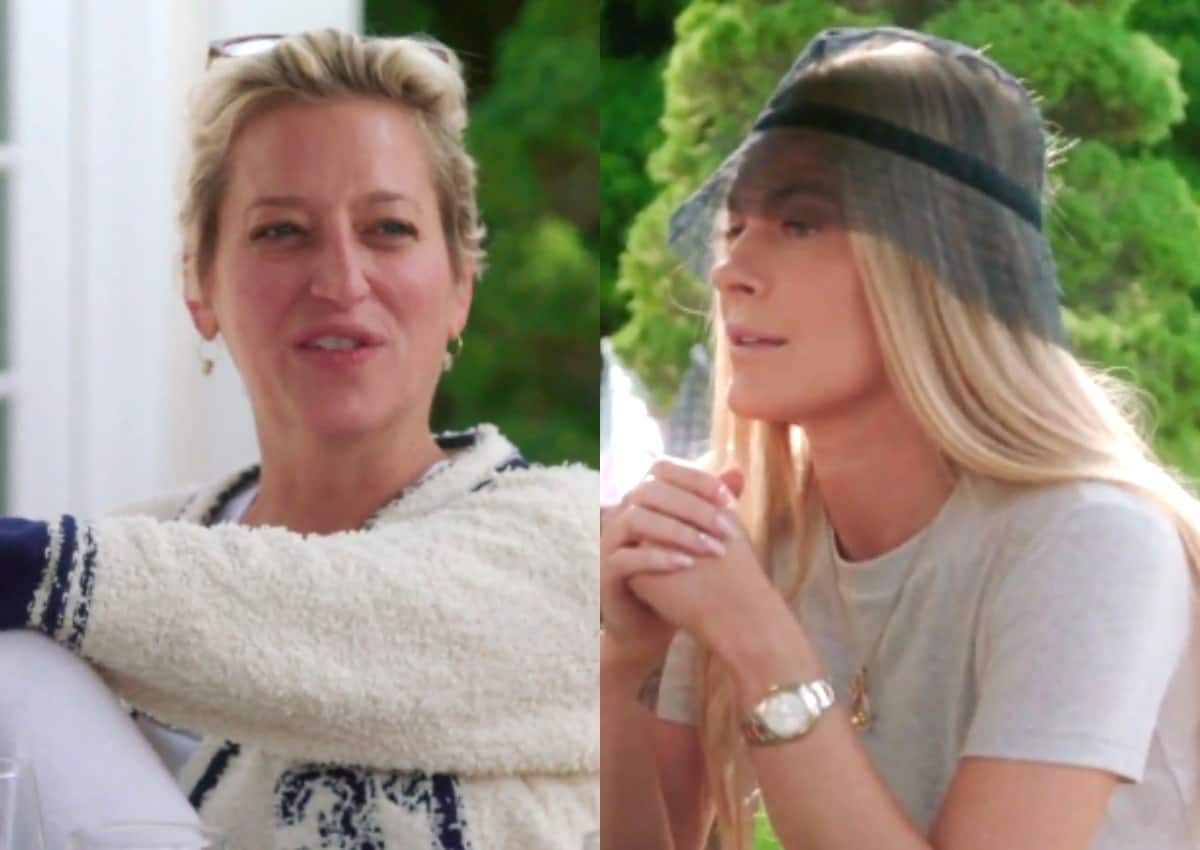 On this week’s episode of the Real Housewives of New York City, the ladies head to the Hamptons. How will Leah fit in with this group on a cast trip? She better have a strong constitution and a Uber waiting outside to take her back to NYC!

Sonja, Tinsley, and Leah meet up to discuss Dorinda and how she treats Tinsley. Leah thinks she shares more with them since they don’t judge her . Tinsley doesn’t feel she should have to defend her relationship or lack thereof to anyone. Just marry the Coupon Cabin guy already!

Leah shares with the ladies that she has a tramp stamp tattoo of her name. Sonja can’t get the word correct and she finds it offensive that she has that tattoo. She jokes it could be helpful so guys won’t forget her name when they have sex with her. LOL, you gotta love her. She is like your aunt who is eccentric and has no filter and just blurts out random crap!

Dorinda is packing for the Hamptons trip to Ramona’s house. She mentions she doesn’t want to share any space near Tinsley. I am sure that is mutual. Dorinda is happy Ramona will be the new lady of the manor. I miss the Dorinda of the past who liked to make nice. She was a lot more fun to watch.

Luann and Ramona meet up to discuss the trip. Ramona gets hit on by some random guy at the bar. Luann shares she is on a manhunt again too. Please, for the love of God, no more Toms! Ramona promises she won’t put Luann in anything resembling a fish room. Since you know, after all, she is a Countess.

Tinsley adopted two dogs from China and she named them Strawberry and Shortcake. She claims they were rescued from a truck where they were going to be slaughtered. Yuck, and a very disturbing image. She needs to learn some Chinese since they don’t understand English. I am sure there is a Rosetta Stone for that!

Dorinda admits that she dissed Leah when she first met her since she is Tinsley’s friend. She thinks Leah must be an escort type since she is friends with Tinsley. Come on now, that is just plain nasty. Yes, Tinsley was raised with a silver spoon in her mouth, but calling her that is just plain uncool. Dorinda is really going all-in on Tinsley this season. Did Tinsley piss on her Cheerios?

Ramona is setting up for the party. She is trying to talk to her dog, Coco, who can’t hear anymore. I am glad that poor dog can’t hear her obnoxious voice. Sometimes selective hearing can be a blessing if you live with Ramona.

Ramona’s house looks beautiful and the spread of food looks yummy. I love the Sonja-isms where she says her chiropractor only says drink clear alcohol since wine is poison. Then she says, “Pass the poison.”

Luann mentions that she inexplicably is staying at Ramona’s house. You know that she is going to end up being miserable with her room assignment. Production can be so predictable. Sigh. They love throwing people together who would NEVER normally stay under the same roof together.

Tinsley and Leah arrive, and there is a bit of awkwardness amongst the group. Dorinda is going to practice the ‘hear no evil, see no evil,’ but she can’t resist the ‘speak no evil’ part. Maybe she needs to work on that part since it is clearly not showing her this season in a favorable light.

Luann is being put in the lower level aka basement. She would be the most high maintenance house guest ever. The only other one who is a match is Ramona.  Luann is already bitching over the AC. She says, “I don’t sleep with air conditioning.” You know in that haughty tone of hers! She is lucky she is banned from Palm Beach since you can’t sleep without AC there!

Dorinda claims she is overwhelmed because her house in the Berkshires has a lot of water damage. She whines it is too much since she has so much else going on. I am sorry, what does she have going on besides shopping and partying? Those are some rich people problems. Get a grip, Dorinda!

There is most definitely something else going on with her. Where is all of her anger towards Tinsley coming from? It seems really misdirected. I think she has a severe case of jelly-nous.

Dorinda wants another Richard, and John isn’t filling those shoes. She is overwhelmed with the mounting costs of the repairs. It sounds like she is used to someone taking care of her. She wants to be carefree again . Bingo, that is it!

Leah and Ramona discuss their upbringing and kind of bond. She wins a bonus point when she brings a candle as a hostess gift. Ramona is not a fan of Leah’s hat/sun visor, though. Ramona claims she doesn’t talk to people who have tattoos. Ok, sweetness, you just were. Sonja blurts out and says they have front and backdoor tattoos. Good signage is a must!

Leah is going to give this group a run for their money. Ramona suggests the youngins clean up the mess since she doesn’t have any hired help.  She still complains that they don’t know how to entertain after they offer to clean up the mess. She can be so insufferable. I would rather sleep with the sharks at Dorinda’s house in the fish room than have to wait on Ramona!

Sonja defends Dorinda to Tinsley and Leah. You can tell the age difference is going to be an issue with these two camps of women. Tinsley tries to warn Leah about confiding in Sonja. You in danger, girl! Sonja is like Ma Bell, she shares secrets on speed dial.

Dorinda takes her anger out on Leah as she mentions how no one else in the group has a tattoo and makes a joke about how Leah could simply bend over to show her tramp stamp tattoo of her name in case Ramona ever forgot her name. A joke that Leah found to be rude and NOT funny. Leah thinks this group is going to drive her to drink. I do think that is a real possibility. Has she ever watched this show? Alcohol is medicinal on this show and you will need it out of pure necessity!

The ladies head to a restaurant in Sag Harbor that looks really gorgeous. Leah and Luann bond over the fact that they are non-drinkers .  Luann describes her bad behavior as a volcano erupting and she left her life in ashes and ruins. She is trying to make amends over how she behaved last season. Keep practicing those 12 steps, Lu!

At the restaurant, Ramona keeps chatting with other friends of hers and not being present with the group. I love Sonja’s impersonation of Ramona and how she thinks she is such a social butterfly. Ramona does a lap of the room with her tits at attention. She looks more like a vulture with her bulging eyes looking to attack her future prey.

Next week, the ladies are already driving Leah to drink!  Sonja adamantly denies she was a trophy wife because she doesn’t shave her pu**y? Umm, okay that should be an interesting defense! See you all next week and be safe!