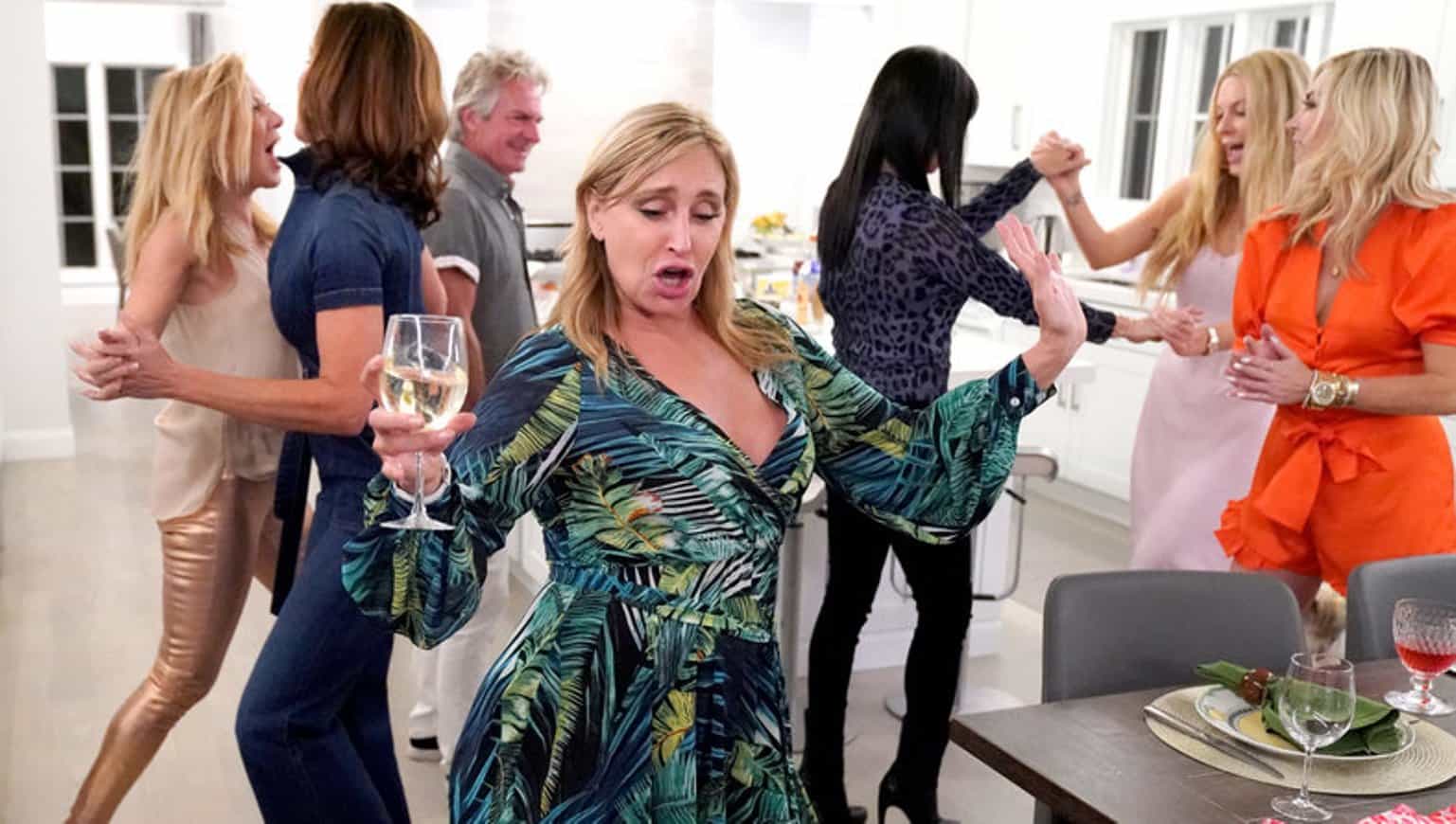 On this week’s episode of the Real Housewives of New York City, we are still in the Hamptons with the New York crew. Will Leah be able to hang with this rowdy group of women? Time with tell…

The episode begins with Luann calling after escaping from the basement room . Luann feels like she was treated like an unwanted guest. Ramona assures her that she wasn’t treating her like a second class citizen and apologizes again. More of Ramona the apologizer part 2,456. Sigh.

Luann agrees to come over to play tennis. She thinks she will get her justice when she kicks Ramona’s a** at tennis. All Ramona wants is another party with food, wine, dancing, and men. Wasn’t she there the night before and saw it is a recipe for disaster?

Tinsley and Sonja argue over being called a trophy wife, again. Sonja’s argument against Tinsley is that Tinsley didn’t know where the shoe repair shop was? I didn’t know that was a pre-requisite for being a non-trophy wife?

Leah basically thinks it’s a nonsensical disagreement. AGREED. She has a good point — if you have to defend your place in your marriage, chances are you were a trophy wife.

Ramona has a hot Italian tennis pro. How does this woman even concentrate on tennis while looking at that guy? The Countess arrives and is sorrey (hate the way she says that) that she had to run away from this batshit group of women in order to stay sober. Ramona is just going to order food in tonight and hang with her friends. She acts like she is slumming with this crew. When did she become a socialite?

Tinsley and Leah discuss Sonja’s delusions of grandeur. They can’t believe Sonja’s still is stuck in the past. In case you all didn’t know she didn’t just marry someone in banking — she married the bank. Hmmm okay, Sonja. Leah just wants to know the Sonja of today, not the past. I don’t. I think this Sonja is much funnier.

Dorinda doesn’t think Luann is an alcoholic, but I don’t think that Dorinda should be the barometer on sobriety. Dorinda believes she has just had three bad years. IMO, I think if Dorinda calls Lu an alcoholic, she has to confront her excessive partying as well.

Ramona is ordering Leah around like she is the hired help. Dorinda wonders if they are guests or Ramona’s servants. I think it is a combination of both. Leah was taught to respect her elders so she is still at Ramona’s beck and call for now…

After Ramona was done burning their food, since she obviously never used this grill, Ramona shares how this used to be Mario’s job. Just get back together and be done with the whole fake dating game.

Luann is given the opportunity to share what troubles her, and she admits it is hard to be sober amongst this group of lushes. She is not freaking kidding! I would need a morphine drip and numerous shots of alcohol to survive this group! Luann wishes Leah wouldn’t have succumbed to drinking so she could have had some sober support.

After meeting the two dog groomers, Luann has the hots for the blond guy. Just to get close to him, she assists him at the sink . Ramona thinks Lu even out-flirts her, but I don’t agree with that. I just think Luann is better at it. Ramona comes across as the creepy older woman with her bug eyes and her surgically enhanced boobs that are just too much. She needs to take it down quite a few notches.

Just when Leah thinks it is going to be a girls’ night, in comes Jack. Leah just wanted a pu**y party tonight. According to Ramona, he makes a mean lasagna and is a pianist? Okay, Ramona, what is this guy really doing here? Ramona called everyone in her phone book and this is the only available dude.

Elyse comes to the get together and we re-hash the whole stupid arm candy thing again. This group is getting so rambunctious that they even scare off Jack. Luann can’t believe she used to behave like this. Leah thinks she can calm someone down by sticking something in their butt? Hmm, I don’t think that has a calming effect at all.

Dorinda is defending John being her boyfriend. She is the foundation of the house, and what is John, the mortar? Ramona thinks he is just not for her, and she claims John asks other women for their numbers. Dorinda thinks since he doesn’t ask Ramona out and that is why she is peeved. Her obnoxious flirting doesn’t get John’s attention so there must be something wrong with him! So Dr. Ramona Kevorkian sucks at her delivery? There is countless evidence of that!

Leah and Tinsley are proclaiming, “F*ck you Park Avenue!” They are daring each other to get naked in the pool, and Leah tries to toss booze on the tiki torches to put them out. Tinsley is so vain about her appearance that she frets over her lashes. Just let your freak flag fly when you are around this group, Tins!

Oh no, now Sonja is going to join the other nudists in the pool. She never misses a chance to strip down. It is funny what a juxtaposition is going on at this party. It is almost like the ladies are playing bingo in the house and girls gone wild is filming outside! There is something for everyone!

Luann can’t believe Tinsley is running around naked. What would Mama Dale have to say about that? Dorinda actually shames Leah over her boobs hanging too low. She is going to make her a star and cover up those nipples on those saggy boobs! She basically just puts a top on her to make her look more presentable.

Dorinda discovered Leah has a wing tattoo near her pu**y, and Leah says her vagina can fly with them! Wow, she has mad super-pu**y powers!

Ramona is leaving her own house to go out with her classy friends. Elyse thinks she is afraid she is going to miss out on some great guy. Ramona thinks they are going to drink themselves to sleep. Boy, is she delusional thinking that this group will behave after her departure. Luann heads back to her own house to escape this mess .

What is an explicative? Sonja thinks throwing out the word accessory is a what??? By the way, 1985 is gone according to Leah. There is so much drunken gibberish. The Morgan yacht has sailed, and there are no more Morgan letters!

Leah screams at Tins, “Don’t get all socialite on me!” Tinsley finally comes to the realization that THIS is why Leah shouldn’t drink. Bingo! According to Leah, Sonja has to let her past go. Be like Elsa from Frozen and just let it go!

One of the most bizarre conversations that takes place this evening occurs in the bathroom.  Sonja is sitting on the toilet and she and Leah have a meeting of the drunk minds. They drunkenly hug it out totally butt-a** naked. You just can’t make this sh** up.

There are tiki torches tossed around, champagne bottles in the pool, and broken wine glasses. Upon hearing Ramona’s annoying voice, Dorinda and Sonja hide under the covers. When Ramona confronts them over the mess, it is hilarious hearing them defend themselves while in their face masks. Ramona claims she got a date out of the party she went to. Sure she did, she just drove around the neighborhood phone stalking Mario on speed dial.

Leah felt she redeemed herself by cleaning up the disaster of a kitchen. Dorinda tries to give Ramona a big slice of humble pie by telling her not to expect others to clean up your place. She shares how Ramona in her home trashed a room with no regrets.

Dorinda told Ramona if you had stayed home and played house mother this wouldn’t have become Animal House! Truth!

Leah felt like last night in her drunken hallucinations that she was in an episode of Game of Thrones. It is funny Tinsley is escaping any accountability sleeping peacefully. She has a bowl of pasta still in her bed!

Next week, we have New York fashion week! Leah gets some tough-love talk over drinking again. Dorinda is questioning her relationship with John. See you all next week and be safe!