RHONY Recap: Leah Confronts Sonja at Her Fashion Show, Accuses Her of Trying to Make Her Look Bad

by Elizabeth May 1, 2020 99 comments
ShareTweetWhatsappPinterestRedditTumblrMailFlipboard 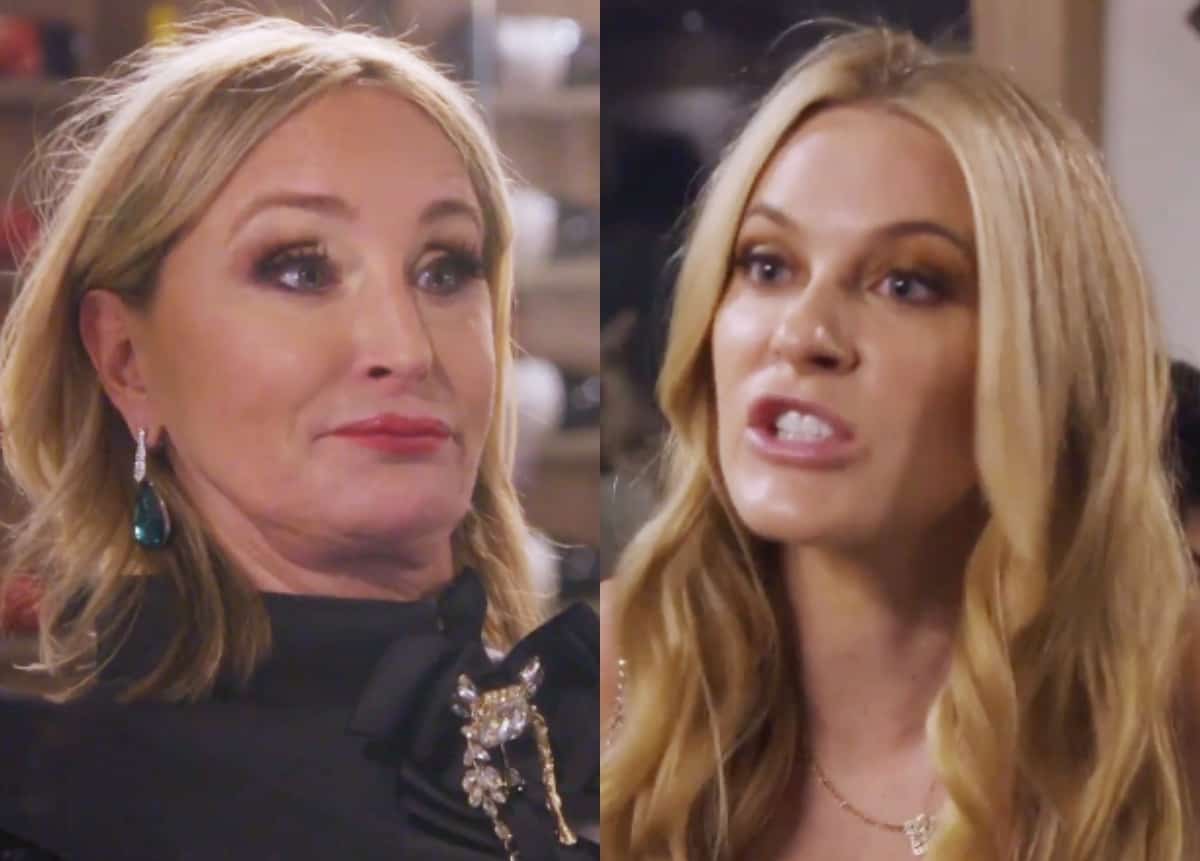 On this week’s episode of the Real Housewives of New York City, we are being treated to New York Fashion Week!  Let’s check out what New York designers have on display this week!

Sonja is preparing her new collection for fashion week. She is just starting to gather her staff and hire models at this point? Sounds like poor planning, Ms. Morgan! During this week, Dorinda and Sonja got into some hot water over their comments about the transgender models. Wonder if Bravo will air that?

Luann is chatting with her producer about her Cabaret show. Every time I hear the word Cabaret, I hear Bethanny say, “Life is not a Cabaret!” Well, to Lu it is! Sorry, I digress.

Lu’s theme is going to be Marry, Shag, and Kill! Well, she sure has done a lot of the shagging part! Lu has a sh*t ton of material to pull from. The Pirate story alone is good material!

Ramona does her ab exercises because she has to get in shape for NYFW. IMO, Ramona looks so uncoordinated no matter what she does! She should do infomercials on what not to do!

Sonja considers her line to be ready to wear because it costs less than $250. She definitely has a different definition of ready to wear than most people! I wouldn’t be ready or able to spend that kind of money on her brand!

Tinsley is walking in Garo Sparo’s show wearing a tiara of all things. Dale, who can’t miss a chance to be on camera, is there for moral support. Mama Dale is such a stage mom.

The show is very avant-garde but it is sure interesting. Tins closes the show in a perfect outfit, and Dorinda thinks this is like a Disney-themed fashion show. Umm, I don’t think I ever saw anything in that show that is reminiscent of a Disney Princess! Tinsley really works the runway and looks like a natural. It makes perfect sense that she used to be called an “it girl” with her confidence on the runway. Smize away, Tins!

Luann arrives at the Pamela Rowland show and plops down in a chair to take advantage of one of the poor hairdressers. She used to be a model and a countess, you know. John shows up for Dorinda and she seems surprised to see him. I see the writing on the wall with this one. Dorinda is going to kick that dry cleaner to the curb!

Ramona is beyond rude and literally pushes other people to the side to take photos with the designer. She is just awful, and it amazes me how this woman has any friends left. Big collective SIGH.

Ramona is complaining about how Tinsley left her Hamptons room at her house. She stained her duvet with spaghetti sauce. Tins in her ITM says she will just go to Bed, Bath, and Beyond and replace the darn duvet. Just get off her jock, Ramona! Stop acting like a pretentious snob!

During the Pamela Rowland show, we see RHONJ housewife Melissa Gorga and Nicky Hilton. Love when we see housewife crossovers! Sonja is ignoring the show and worrying more about her show . Ramona can’t understand why Sonja isn’t enjoying the moment since she got them front row seats! Okay, Ramona, slow your entitled roll, you are in a row that is back to back to another front row that the models walk by. I did, however, like some of the clothes worn during this show.

Leah wasn’t able to attend this particular show since she has some family issues to deal with. Ramona can’t understand why anyone would miss an NYFW show? Maybe because some people are not self-involved obnoxious trolls and actually care about other people!

During lunch, the ladies are catching up about the shows. Ramona wants two dozen oysters. Dorinda thinks that by eating what is known to be an aphrodisiac, she will start to look like a vagina. Lu’s gag reflex kicks in on that visual! Mine too!

Dorinda’s description of Ramona’s obsession with oysters and the clips of her are rather pornographic. Awful visual. If she has sex like she dances, works out, and flirts it has to be a total fright to imagine her in bed!

Sonja is losing her mind over her fashion show which she clearly just started planning it. The other ladies can’t imagine why she is so ill-prepared. Have they met Sonja? She hires un-paid interns to do everything for her!

Leah arrives and apologizes for her absence, and Ramona tries to give her grief about missing the show. Leah describes how her mom isn’t talking to her because she started drinking. Ramona calls Leah rude for not showing up. Talk about calling the kettle black! The other ladies think that Leah sharing her fu*k up over text was messed up.

The ladies discuss the mother-daughter dynamics they all have. Tinsley argued with Dale over curling her hair. Leah wishes that is all her mom ever got upset with her over. Dorinda wants to cut her ears off and remove her brain after having to listen to this ridiculous story. Mother Teresa wouldn’t have the patience to listen to this drivel. Everyone just realized Ramona only ordered food for herself. Again, point proven!

Leah shares with us her “Married to the Mob” line of “streetwear.” Her brand is unique since this market was previously only geared to men. Leah was a tomboy and she liked the easy-going look. Good for her, designing her own line of street-chic!

Leah’s ex Rob is Kier’s dad and he stops in. Rob is aware that Leah had a drink as in the singular sense? Wait till he sees this episode! He is also concerned she is going down a dangerous road drinking again. They seem to have a healthy co-parenting relationship.

Dorinda is wearing a Liza Minelli-inspired piece from Sonja’s line to her show. She shares with her makeup artist that she and John are just not on the same page, and Dorinda is doubting his sincerity right now. On a side note: in her ITM she is wearing a lip color that is almost corpse color. So not flattering.

Sonja is like a whirling dervish of dysfunction trying to bring some order to this disorder. She is ordering around all of these random people who look as clueless as she is. It will be a pure miracle if she can pull this insanity off. She is in a tizzy over the flower arrangements designed by Home Depot. Honey, you have bigger problems than that!

Leah and Tinsley are riding together to Sonja’s show. Leah is not feeling the “crackwhore look” that Sonja put together for her. Tinsley is happy in her white girly-girl looking dress. Leah even sent Sonja three dress styles from her site. She gave her some Hustle and Flow look and she is going to confront her about that!

In her ITM, Ramona claims all Sonja did is slap her label on someone else’s designs. She then states that she will be there to support her while throwing shade at her BFF. Elyse and Ramona are of course at the bar worried more about the cocktails. Poor Leah has to wear her Lil’ Kim dress because she doesn’t want to look gangster? Did she ever see the movie Notorious?

Dorinda is surprised to see John pop up again at the show, but he needs to keep getting air-time while he can! Leah gets a sweaty kiss/hug from John. Gross.

Sonja is still milling around and not dressed yet. She must have forgotten to put the power on since it is pretty dark on the runway and there is no music.  Sonja, in her drunken delusional state, thinks designers are following her designs !

Leah thinks Sonja is punishing her by giving her the gangster outfit over the whole Hampton’s debacle. She returns it to Sonja in the ripped plastic bag it came in. BOOM! She will not take her passive-aggressive behavior!

Sonja quickly turns the tables and puts on the grey cashmere sweatsuit. She strips down in the kitchen for this dress change with other men ogling her. Dear Lord! Leah can’t stay mad at Sonja when she changes into that pimp in pajama look and tries to make it happen. You have got to love Sonja, she is so hard to stay mad at!

Next week, Jacques is back and Lu is drinking again… See you all next week and be safe!