by Julia May 6, 2020 77 comments
ShareTweetWhatsappPinterestRedditTumblrMailFlipboard 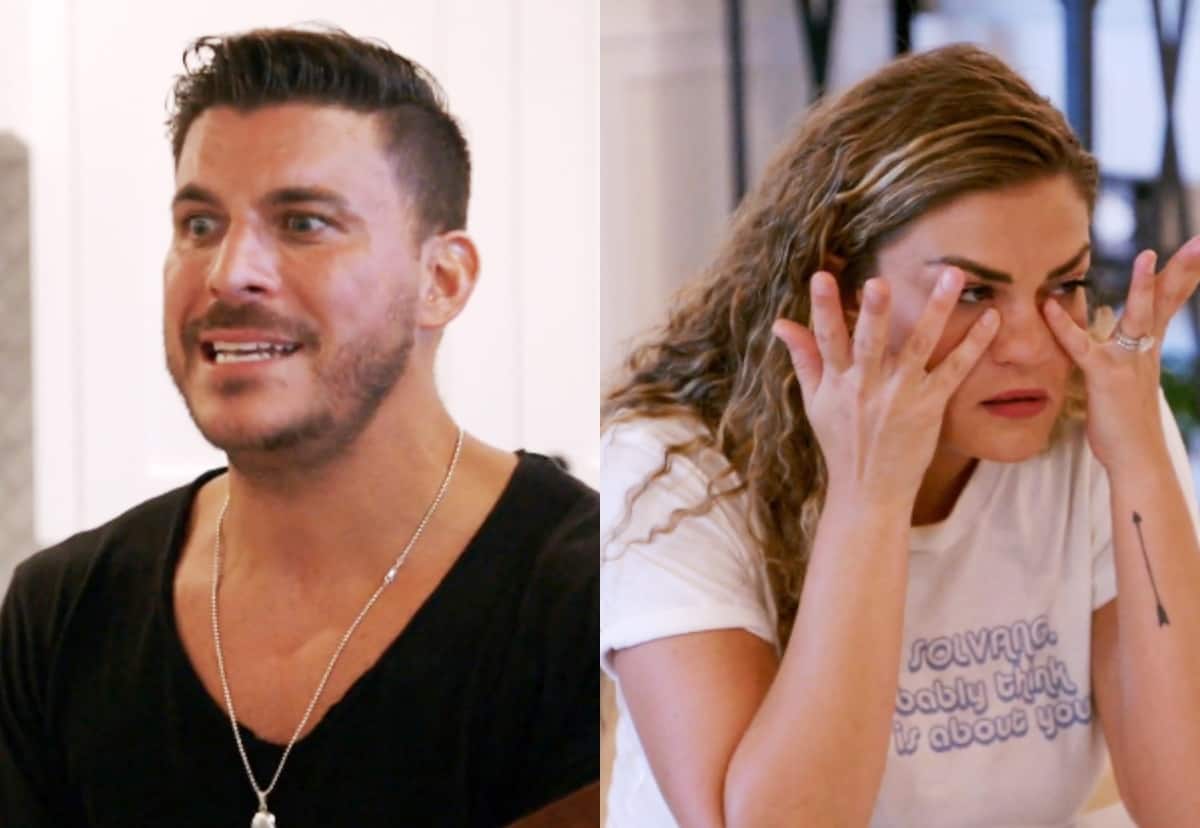 What happens when a 40-year-old dude stops getting attention? Find out on this episode of Vanderpump Rules.

First of all, I am dead over Brett’s hair. I wonder if LVP told him she likes it better like that?? Okay, so now Dayna and Scheana are on a “hey toots” level? I mean, Scheana just filmed her music video with Brett out in Palm Springs and it legit looks like a s*x tape. Why is she showing that to Dayna when Dayna HOOKS UP with Brett? Wow. Scheana has zero self-awareness.

Jax and Sandoval are hanging out…at a sneaker cleaning store. Jax’s credit card gets declined and he doesn’t even flinch. So pathetic. Jax fills Sandoval in on the newest Kristen update and then wants to know if Sandoval is “fine and happy” with Ariana. Essentially, Jax is sniffing around and trying to find his next victim. The guy’s an attention whore and because his wedding and 40th birthday have come and gone, he needs a new reason to stay relevant and focused on. Jax finds it hard to believe when Sandoval claims he has never called Ariana a b*tch. Sandoval can tell that Jax is just starting to get bored — aka back to his old ways — and it is not looking good for the poor, unknowing sucker who gets Jaxed next.

Brittany and newly engaged Stassi discuss wedding planning. Stassi is already claiming that she is going to be a wedding monster like that is a good thing?? Naturally, Brittany brings the mood down big time by bringing up Kristen. She wants to be sure everything will be okay if Kristen and Stassi are together for her upcoming pool party. Sigh. Same story…

Nice of Jax to show up to work…an hour late. He is full of p*ss and vinegar and is hell-bent on finding out if something is going on between Sandoval and Ariana. Jax believes the relationship to be a façade, and I mean, CLEARLY Jax is the relationship expert, so he can DEF sniff out a bad one. He calls Ariana miserable and makes fun of Max’s beach clean-up. Jax is spiraling out of control and just wants to make someone, ANYONE the target for his rage.

LaLa doing manual labor is hilarious. She is busy working hard at Vanderpump Dogs and chats with LVP about the newest sober cast member. Speaking of…check out sober James picking up pink silverware and whipping up a big feast for his number one lady, Raquel. Over dinner, the couple discusses Max’s upcoming beach clean-up and James is thrilled to be invited. Things really seem to be looking up for James in his teeny-tiny world.

It’s the day of the beach clean up and it just seems like a reason for this crew to showcase their bods in skimpy bathing suits. Jax is refusing to attend and picks a fight with Max about how stupid he believes the sentiment to be. Jax’s black-out texting has gotten him in trouble before and Sandoval lets Max know that he shouldn’t sweat this version of Jax.

Dayna gets a chance to talk to Brett about Scheana’s “music video.” I am putting it in quotes because I doubt MTV would be showing that unless it was after like…3 a.m. Let’s call it what it is: it’s a s*x tape. Brett tells Dayna that Scheana made him uncomfortable, and at the end of the ordeal, Scheana said to him, “You want a blow job? I said no and that’s hard cuz I love blow jobs.” Bravo, Brett. Way to remain strong.

Later, Brett and Max have a weird discussion about Dayna, and it is becoming evident that Max is NOT okay with the new couple and that this bizarro love triangle is only gonna get messier by the minute. Talk about messy, Jax is a ticking time bomb and Max is taking his wrath. Brittany is stuck standing up for her psycho husband, and I would say poor Brittany, but that girl signed up for this sh*t. She CHOSE Jax. WTF is wrong with her?!

LVP bumps into Raquel at SUR and she wants to make sure James really IS sober. Raquel repeats over and over that this time around with James, things are different. LVP looks proud when she hears those words. I never did understand why she cared so very much about James, but it is heartwarming to see her be so maternal.

Ariana explains that she has learned to manage her depression by hosting and cooking for her friends. Interesting, considering there is zero furniture in their house. I guess everyone has to bring their own chair? Jax is continuing his rage texting and is clearly having a hard time with the fact that no one is paying attention to him. Sounds like typical 40-year-old behavior. Note the sarcasm. Because everyone is starting to get fed up with Jax and his threats of not being allowed to his pool party, Sandoval suggests he host a party on the same day. Because firing Jax up even further sounds like a SOLID idea, Sandoval…

Post dinner, Max snags a second to express his feelings to Dayna. He tells her that he feels weird about her seeing Brett. Max gets tongue-tied and Dayna shuts it down. I appreciate that and I applaud her for trying to keep him in line, but you can kind of see her thinking over his stupid one-liners.

Kristen is a helluva entrepreneur, huh? First the Witches of WeHo and then James Mae. Let’s hope her clothing line is more successful than her wine line, amiright? Brett uses this venue to talk to Scheana (in front of Dayna) about how uncomfortable he was whilst filming the video. Scheana tries to play it off by saying, “Yea, it’s called acting, Brett. Don’t take it so serious!” She tries her best to act cool, but you can totally tell she is dying inwardly. Also. I can’t take Brett seriously with that mop on his head.

Look what the cat dragged in…Jax. He apologizes to Max and makes it clear that he was out of line. Jax claims that he is going through some  “mental issues” and he even takes back disinviting the fellas to his super cool pool party on Friday. PHEW. Jax looks absolutely exhausted. His thumbs must be killing him from all that texting…

Just when you thought it was going to end happily, Jax finds a new victim: Kristen. His eyes look wild and he begins questioning Kristen’s love life timeline as if it is any of his business. Now, Kristen is wrapped up in some crazy video with some other dude — not Carter. How embarrassing. Jax goes running his mouth (shocking) to the crew and Kristen is mortified that this is all going down at her event. Jax goes off the deep end calling Kristen a liar and Brittany blindly follows him out of the party.

The next day, James feigns a table of one luncheon at SUR when LVP just so happens to breeze in and plop down at his table. Some coincidence… Sober James shares that he wishes he worked at SUR at the same time as Raquel. LVP looks at him and can tell his head is clear and things may be different. Interestingly enough, SUR doesn’t have a DJ — what!? — and therefore, DJ James Kennedy is able to hop in. Wouldja look at that. LVP is truly his fairy godmother. This kid gets all the chances.

Oh, dear. Back at Jax and Brittany’s house, Jax has those crazy eyes. You know the ones. Brittany is trying to understand why the ef her hubby is losing his sh*t over Kristen’s hookups, but I am here to tell her that it is because of…drugs. He straight up says he smokes a lot, gains weight, takes Adderall to lose the weight, and then gets all topsy-turvy. OF COURSE YOU DO, JAX. That cannot be healthy! Brittany cries to Jax and Jax seethes over Brittany’s tears. Seems like they are def still in the honeymoon phase, don’t you think?