by Julia May 14, 2020 152 comments
ShareTweetWhatsappPinterestRedditTumblrMailFlipboard 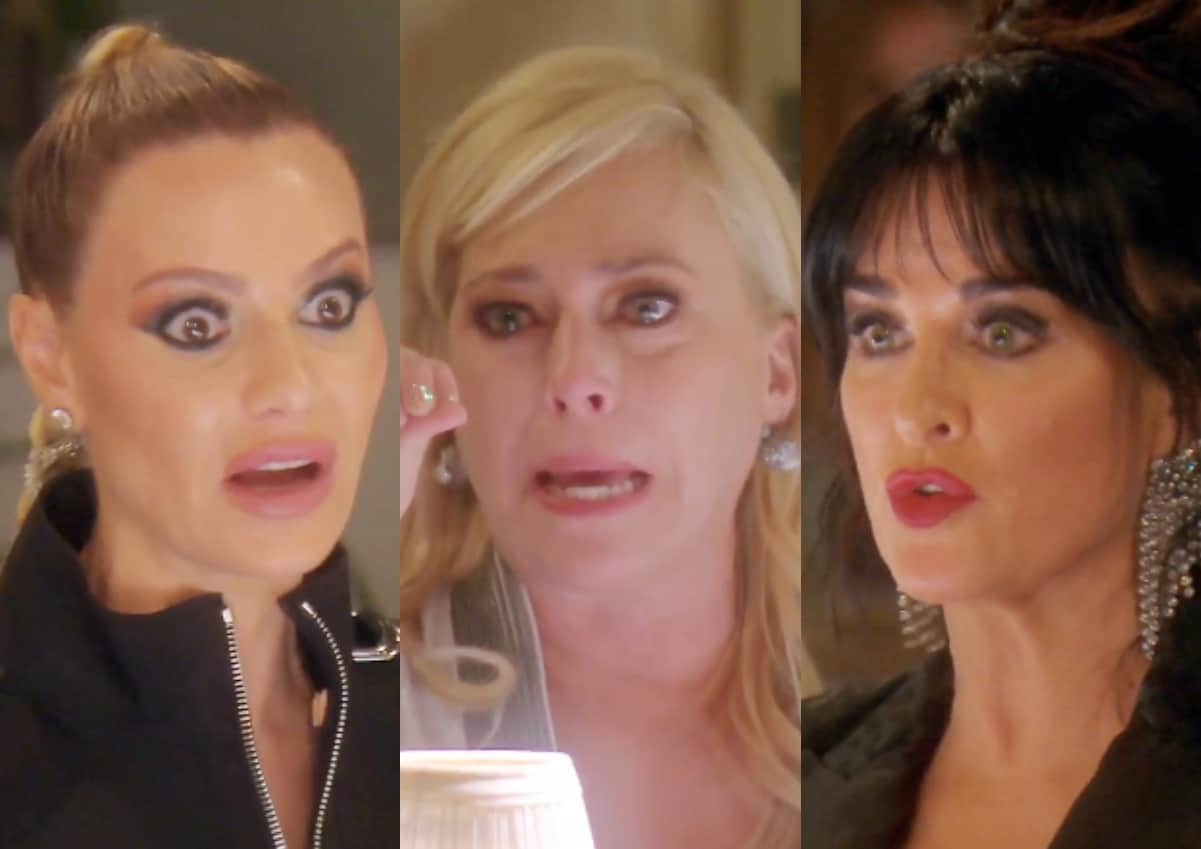 On this episode of the Real Housewives of Beverly Hills, the meltdowns continue, but this time, more people get involved…

And we are right back into the sh*tshow dinner party at Denise’s. Rinna, the therapist, wants to get to the bottom of what’s really going on here with Kyle. Sutton gets feisty and calls the ladies children because she can’t get a word in. Kyle claims she was offended when Dorit stated she had a life, which insinuated Kyle does not have one. PUH-LEASE. Anyone who knows Kyle knows she is a busy bee because she TELLS YOU ALL ABOUT IT 24/7.

I feel like I’m experiencing déjà vu. Kyle feels as though everyone is being dishonest and they are too busy kissing each other’s a*ses. This is totally her M.O. She calls the ladies fake, and when Rinna attempts to jump in again, Kyle tells her to back off before she storms away from the table.

Teddi is disgruntled that all of the ladies ganged up on Kyle, and Denise seems more infuriated that they were talking about threesomes in front of her children than with the Kyle antics. They are stuck on a helluva hamster wheel.

The next day, Rinna visits her daughters Delilah and Amelia. The girls are in the midst of putting together their clothing line, DNA, and in the words of Rinna, “When you grow up in the shadow of a celebrity parent…” Oh puh-lease. Amelia can’t handle school in NY, but she has decided to launch a clothing line with her sister?! Rinna is channeling her inner Kris Jenner as she mom-ages the girls. It’s so pathetic watching her slip into pieces from the line and then getting into the photoshoot. Attention whore is an understatement.

Denise and Erika are out for some coffee. Erika apologizes for cursing in front of Denise’s children at the dinner party, but let’s not forget Denise was talking about penises and happy endings like crazy last season…. Erika has invited the ladies to her “clubhouse” prior to DNA’s launch party for some appetizers and drinks, but Denise is dreading it. She is not looking forward to seeing Kyle, as they have not quite made up from the dinner party.

It’s the twins’ 12th birthday and Garcelle is throwing a party. Her ex comes to celebrate and she explains that they share the boys 50/50. Their relationship is pretty good and it seems as though the boys still have no idea that their father was having an affair. Garcelle did a great job of hiding her pain and the true situation. Although it is sad for Garcelle, the boys clearly have had a great upbringing.

It’s the day of the DNA launch party and Lois, Rinna’s mom, is along for the ride. Poor Lois is getting dragged around for the night by her crazy daughter, but she seems up for it. First stop is Erika’s clubhouse. LOL. Every time I type that I cannot believe that a grown a*s woman calls something she owns a “clubhouse.”

The ladies come over to have some apps, and Rapunzel, I mean Dorit, looks absolutely ridiculous with that rat tail ponytail. Kyle shows her face (and her boobs) in front of the ladies she was just clawing at over dinner a few days ago and things are a teensy bit awkward.

The vibe changes when Lois rolls up in her red leather jacket. It seems like Rinna realizes her behavior was a bit out of line at Denise’s dinner and so she apologizes to Kyle. Of course Kyle can’t simply accept it and move on, but in the end, the women make fake amends because they can’t help but be fake a*s b*tches. Kyle said it. I’m just repeating.

In the meantime, Erika, Denise, and Dorit talk about Dorit’s newest business venture, a restaurant called Buca di Beppo. Dorit has invested in one location and there is talk about some sort of celebration party, but all I can think about is Dorit’s gross ponytail. Ew.

Since she so enjoys being the center of attention, Kyle has an announcement. Because she has finished filming her movie, she wants to celebrate by going to an overnight at a house in Santa Barbara. All the ladies are invited, even if she doesn’t even like half of them. Who is fake now?

Sutton gets real creepy upon arriving at the clothing launch. She whispers to Dorit that she is gonna flip out because the make-up guy is here?? It seems as if Sutton jumps to some serious conclusions. Prior to the event, Rinna foreshadowed a special collab at the launch, and Sutton automatically feared it was going to be Joey Maalouf, a mutual friend of Rinna’s and a fallen business partner of Sutton’s. Let’s just say things ended badly between Sutton and Joey, which would explain why she would be so nervous to see him.

Delilah and Amelia are strutting around taking silly posed pictures inside the launch. Rinna runs around micro-managing and showing off “cool” things the kids did. It turns out the collaboration was with the Fat Jew, NOT Joey Maalouf, and so Sutton breathes easier.

During an awkward moment waiting around, Kyle makes a half-a*s apology and Denise sees right through it. Pretty amazing. After a painful, what seems like five-minute, visit to the launch event, Rinna rallies up the ladies and they head out for dinner.

Although things seemed like they were off on the right foot during dinner, Dorit lets the table know that Sutton said she was going to freak out about Joey at the launch. Sutton gets thrown right into the spotlight and defends herself, as the whole ordeal is getting blown out of proportion. Dorit claims she was scared by Sutton, as she doesn’t know Sutton very well and was worried about her reaction.

All of a sudden, Rinna gets nasty with Sutton and threatens if Sutton had ruined her children’s event, she would have flipped out on Sutton. Okay, Rinna. Cool it. I love how Lois just sits there like, these ladies are f*cking crazy.

As Dorit continues to lay into Sutton, Sutton spits back, “Take care of your own house, don’t come after mine. You’ve had your fun, let the mouse go.” Dorit doesn’t follow instructions very well and attempts to come back from Sutton’s diss. She claims she is only doing what she is doing because she is being honest, as per Kyle’s request to stop being a fake a*s b*tch.

Denise steps in and wants some clarification about what Kyle really meant when she said that infamous comment. There is fire in Denise’s eyes. Kyle gets into her mode where she tries to defend herself but just backs herself into a corner. Kyle calls Denise’s diamond ice sculpture a fake move, considering she didn’t really try very hard with her look until this season. Like, what?! Denise gets scary as her eyes burn into Kyle’s soul. I love how Denise reminds us all of her past. This lady doesn’t have to be glam! Look at her portfolio.

Things do not get resolved, but Lois adds some lightness and entertainment to this dinner full of ridiculous antics. I say we bring Lois in for next season. At least she tells the truth…except when it comes to her age!