by Elizabeth May 25, 2020 24 comments
ShareTweetWhatsappPinterestRedditTumblrMailFlipboard 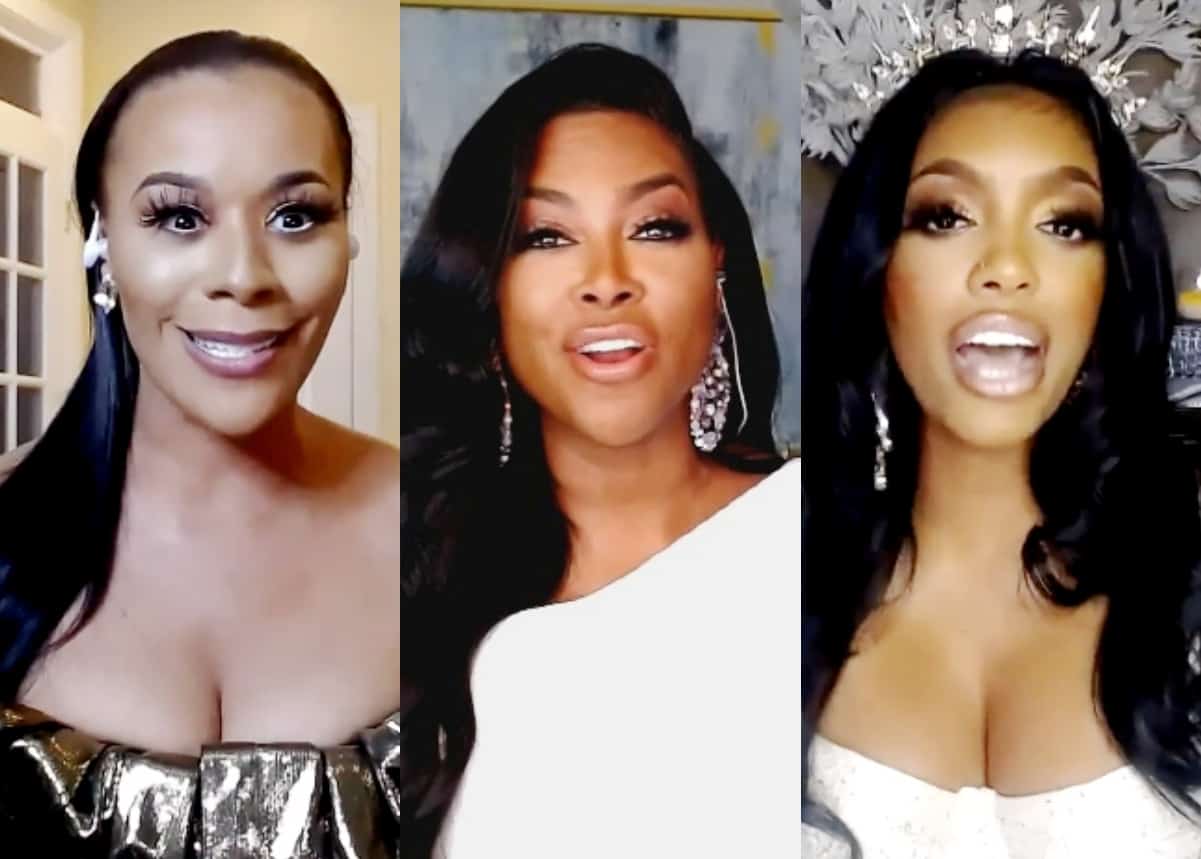 On Part 3 of the Real Housewives of Atlanta reunion, will Nene rejoin the group? What tea will Yovanna share with the ladies? Wait for it, here it comes!

First of all, I have to give Kandi aka Night Angel a big shoutout for winning The Masked Singer! She had some tough competition this season. Bravo to her for being the first female to win the show!

Let’s get to the drama! Still no Nene so she must have left the building so she doesn’t have to face the music . We then see the clips again of Nene’s redemption tour. Productions shows all of Kenya‘s shady moments to Cynthia. Cynthia doesn’t believe Kenya had malicious intent, and she acknowledges it wasn’t nice that she was being shady and tried to ruin her surprise engagement. Cynthia, honey, you do have to come up for air at some point when you keep your head in the sand all season!

Kenya deflects blame to Cynthia and the whole cookie lady drama. She also thinks that since Cynthia invited the cookie lady to Brooklyn’s party, she is just as guilty. Kandi calls Cynthia out and says that telling Tanya at the party was messed up too.  Tanya believes Cynthia’s version of events so I guess that is all that matters.

Kenya claims the wine shade was just her joking. She was pulling a kiki first, but the viewers thought she was trying to humiliate her on her lack of wine knowledge. A viewer thinks that Cynthia is attracted to toxic people by having those two as friends. Amen.

We know Kenya wouldn’t tolerate that for one second regarding her products. Nene shares that she thinks Cynthia constantly gives Kenya a pass. Cynthia shares there are good sides to both women. Hold up! Please show us some receipts on that, Ms. Bailey! Where is the evidence of the acts of kindness from these two?

Eva shares that there are some Instagram posts from Yovanna waiting for her five minutes of fame. Andy gets word from Nene’s producer that she wants some respect put before her name. She is also leaving her Bravo laptop on her porch. If I was her producer, I would drop-kick it off her porch and shred her check for this reunion too!

We then see all of the nasty scenes of Nene vs. Kenya. They both acted like a bunch of wild animals this season. I am sorry — that is an insult to animals! Nene gloated over Kenya’s divorce and Marc’s treatment of her, and Kenya can’t get over Nene calling Brooklyn a buffalo. Kenya was pushing for Nene to get the bully edit this season by talking to the press.

Kandi reflects how security had to be called at Blaze’s baby shower. Kenya claims that she gave Nene credit for being an asset to the show but got nothing in return. Andy is defending Nene and clearly showing his obvious bias. I think he doesn’t like Kenya and he would take the devil’s side over Kenya.

Andy questions Kenya about checking on Gregg, and she rebuts that with proof of texts and calls. Marlo is shaking her head in defense of Nene the indefensible. Kenya is offended Nene never reached out during her high-risk pregnancy.

Kenya admits Nene was blocked when she tried to reach out during filming. She wasn’t willing to buy tickets to her apology tour this season. Andy then decides to take a break . Why does he insist on catering to her? If you are going to hate on one villain why not the other ? Share the shade, Mr. Cohen!

Andy shares that Nene said she never spit on Kenya, and Kenya claims Nene acted out a spitting motion and lunged at her. She also tossed food on her. Kenya wished the others supported her when that all played out .

Kenya says she doesn’t provoke others? Come on, girl, we watched you all season! Andy even throws his hat in this ring. He is like a dog with a bone. I think since he didn’t have Nene participating he had to shuffle his question cards to shake things up by asking Kenya the shadiest viewer questions.

Marlo and Kenya go at it over the mom dig now, and she also mentions Kim Fields and Porsha have been targets of Kenya too. Truth.

Porsha is sick of hearing Kenya’s square talk. What exactly is a Color Purple monologue? I loved the movie but not getting her reference. Porsha reminds Kenya that she never left the show Kenya ran away from the fire. Porsha shades Kenya and says that even when she wasn’t a housewife she had more scenes than her. BOOM.

Andy has to break the screaming up by showing his innocent little baby, Ben. That is pretty messed up that it took a cute baby to have them draw their claws back in.

Andy then brings up snake-gate, and we have to see Yovanna again. Lord, please give me strength! We then have to see all of the discussions and speculation on who the snake is. The suspects were Marlo and Yovanna. We now know Yovanna was the guilty culprit.

Yovanna, aka that bit**, is in the squares. Ugh. She thinks Nene disappeared because Yovanna has dirt on her. Yovanna has been getting nasty texts from Nene and calls from blocked numbers. Nene wants any recordings of her to be erased that might defame her.

Yovanna also got a ceast aka cease (these ladies never get this title right — I am looking at you Tamra on RHOC) and desist. She hired Mike Sterling to represent her. Eva is happy her hubby is representing her, but I wouldn’t brag about defending Yovanna.

Tanya makes a good point on what’s behind Yovanna’s story changing so many times, and Marlo shares that Yovanna did mention a recording of Cynthia. Cynthia admits she has talked negatively of Nene when they weren’t friends.

Andy even wonders if Yovanna has any credibility. Nene allegedly wanted dirt on Porsha too. Tanya said she is going to need counseling after this. Me too !

Porsha has a good point — why didn’t she come forward before? Yovanna acts like she just became aware of Nene’s denials. Sure you did. Cynthia makes a good point about how Nene should have been there if she was innocent in all of this.

Kandi is not buying what Yovanna is saying. Kenya, Eva, Cynthia, Kandi, and Porsha are half and half in believing Yovanna over Nene. Kandi thinks they were both co-conspirators as the snake. Truth. Yovanna starts speaking in Spanish to try to appear more credible? You are going to have to start speaking in tongues to be more believable!

Porsha is on the phone with Nene, and Nene then wants to be put on speaker? This is beyond ridiculous. The only thing I want to hear out of her mouth is ‘I quit!’

Porsha tells Nene to come to her laptop, and she tells Nene there is a perception in the group that she ran away in fear of what Yovanna was going to say. Nene says she is going to drop her receipts in Porsha’s mailbox.

Eva wants to apologize for blaming Marlo for snake-gate, and Marlo accepted her apology so at least something was resolved. Andy acknowledges Eva has had a good season, which I think translates to boring for him. He pretends to empathize about Kenya’s dramatic season, and Marlo and Yovanna sign off. Adios, amigas!

Porsha is still standing by Dennis. Cynthia is still chillin’ in LA with Mike and Noelle, and she just wants to get married. Kandi is feeling awesome spending quality time with the family .

Andy thanks them for literally calling it in for the very first virtual reunion. He is wearing his boxer shorts. Andy shows some blooper moments involving boob adjustments, sound issues, etc. Production must have been scrambling to put this episode together sans Nene.

We can put a pin in this season! I hope everyone has a wonderful Memorial Day weekend!