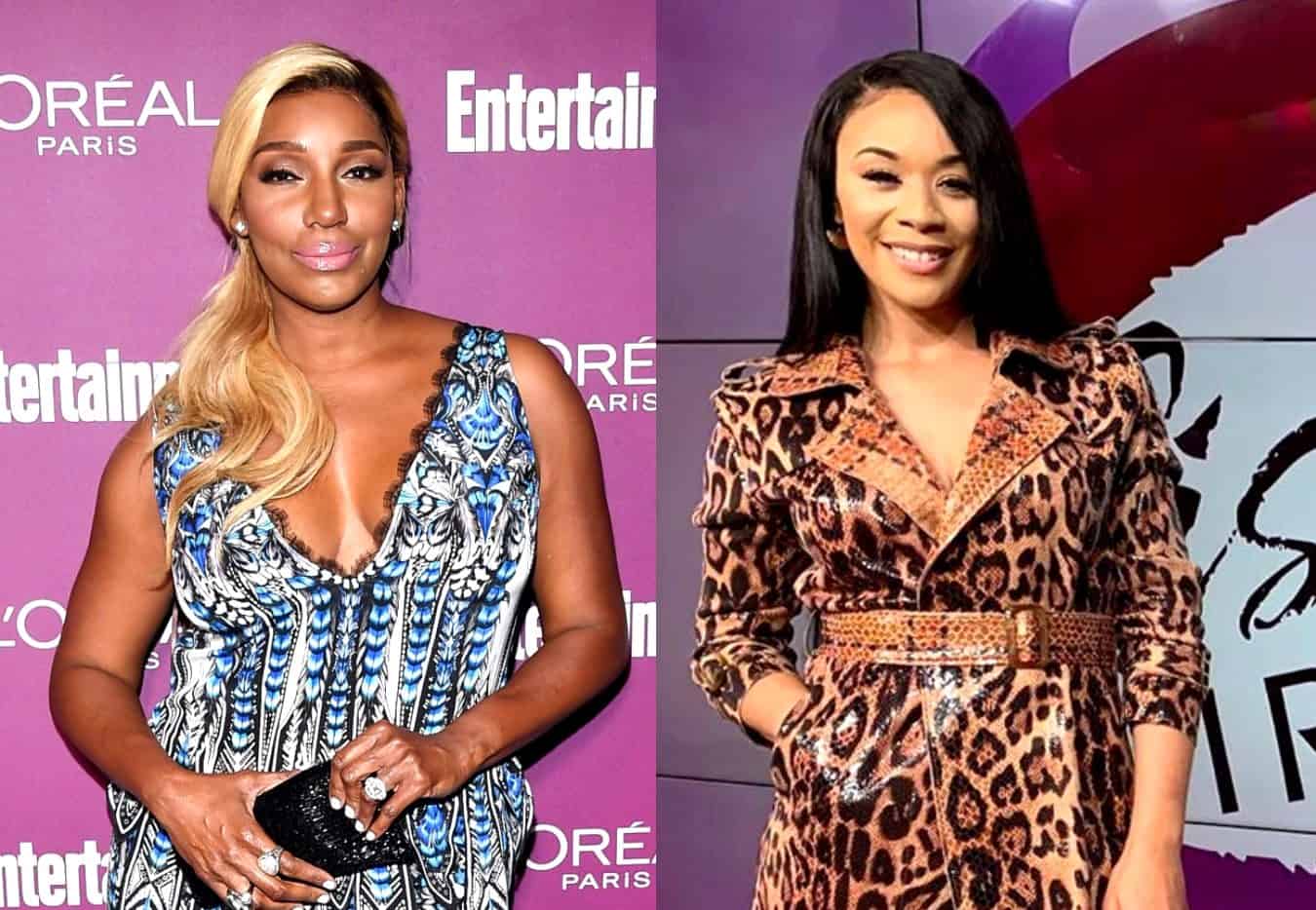 Although the rumored fiery Real Housewives of Atlanta virtual reunion has finished filming, the Atlanta ladies are still bringing the drama, with Nene Leakes and Yovanna Momplaisir‘s feud continuing off-screen.

The former friends took to social media to throw more shade, with Instagram posts of messages and texts implicating who is to blame for the infamous “Snakegate” controversy.

As RHOA fans can recall, Yovanna, who has appeared as Nene’s friend on the show in past seasons, was the center of the drama this season when it was revealed there was a secret recording of Cynthia Bailey allegedly saying mean things about Nene. Everyone wanted to know who was to blame for the recording. It eventually came out that Yovanna was the “snake” of the thereafter dubbed “Snakegate” drama.

Nene has since been reportedly exposed as being the one who orchestrated the controversy, and Yovanna feels that Nene is only telling part of the story — and dropping “receipts” at a convenient time vs. bringing them to the reunion.

“[S]he’s mad that she’s about to be exposed,” Yovanna explained. ” I think that it’s, it’s just her way to, like I said, manipulate people’s minds before the truth actually comes out. This is just what you call desperation. So it’s just funny that these receipts that she keeps posting, they’re doctored up and they’re all one sided.”

“What i think or what i know?” Nene captioned a post revealing an older text with Yovanna explaining how she was going to bring up the audio recording. “i know the thirst is real,” she continued, teasing a YouTube video to explain what really went down. 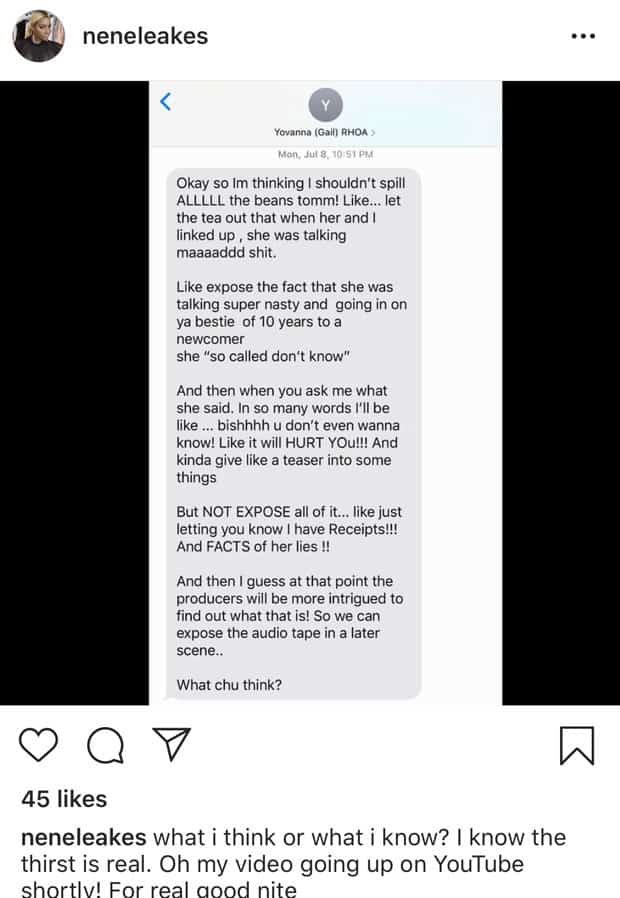 “It took you two days to piece together them bogus ass text messages?” Yovanna responded on her Instagram post that claimed she was a “no show” at the reunion when receipts about “Snakegate” were brought up. 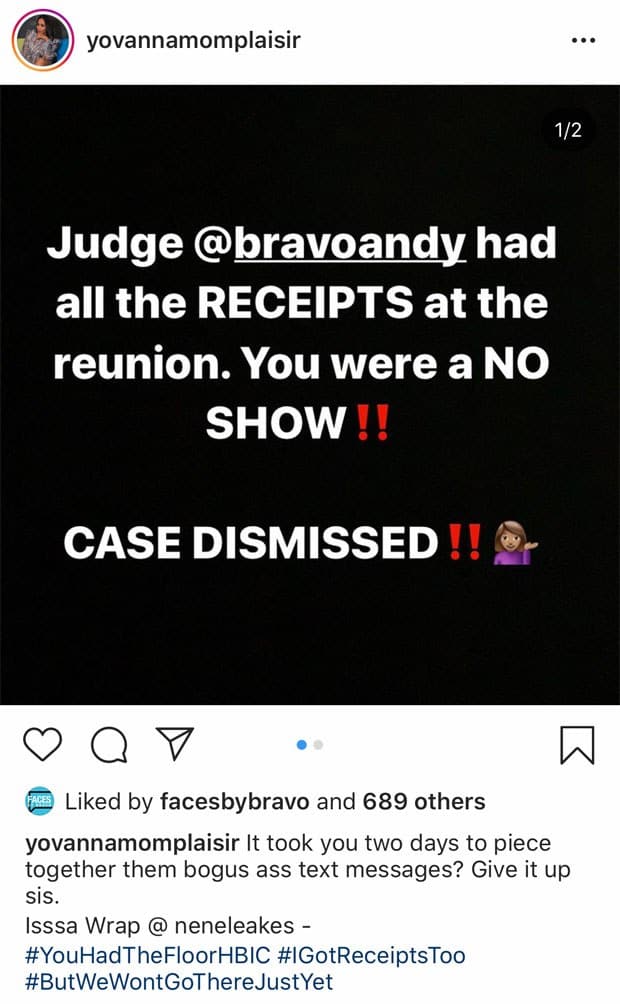 Although Nene has since deleted her post, she addressed the reunion on her YouTube page on April 26, claiming that Yovanna was lying about saying the audio actually never existed. But Yovanna wasn’t having it, adding that she’s definitely not afraid of Nene and that the RHOA OG has “met her match.” She also teased the importance of the reunion as “every single thing is laid out there.”

Amid rumors about the RHOA reunion taping and her beef with Yovanna, Nene addressed what she felt wasn’t fair about how everything was handled. She questioned why she was the one seemingly taking all the heat, pointing out how the cookie lady was never brought on to confront Kenya Moore, and Todd Tucker wasn’t brought on to discuss his issues with Kandi Burruss.

Nene also threw shade at Yovanna for being “thirsty” and claimed that the producers did not want her to be on the show, even though she tried to find her way in.

She continued, “You recorded Cynthia and you did — I have the transcript, I have all of the text messages, you did record her. And I sent them all to Cynthia yesterday and I have more to send to her. It didn’t make sense for me to sit and talk to her about nothing when I did nothing to her.”

Nene further denied the narrative that she set Yovanna up, claiming she sat with producers who wanted to hear the recording from Yovanna to ensure she had what she claimed. Nene didn’t choose to go any further with her behind-the-scenes explanation, but she lamented her confusion as to why she seems to always be the one to blame.

“Just know — she’s telling another lie,” she said. “And all these girls care about is what they can try to do to bring me down. I don’t know why they choose to do that all the time […] it’s really disappointing to have a friend that you’ve been with for 10 years and they just sit there and just be okay with people saying all this stuff that you know yourself is not true.”