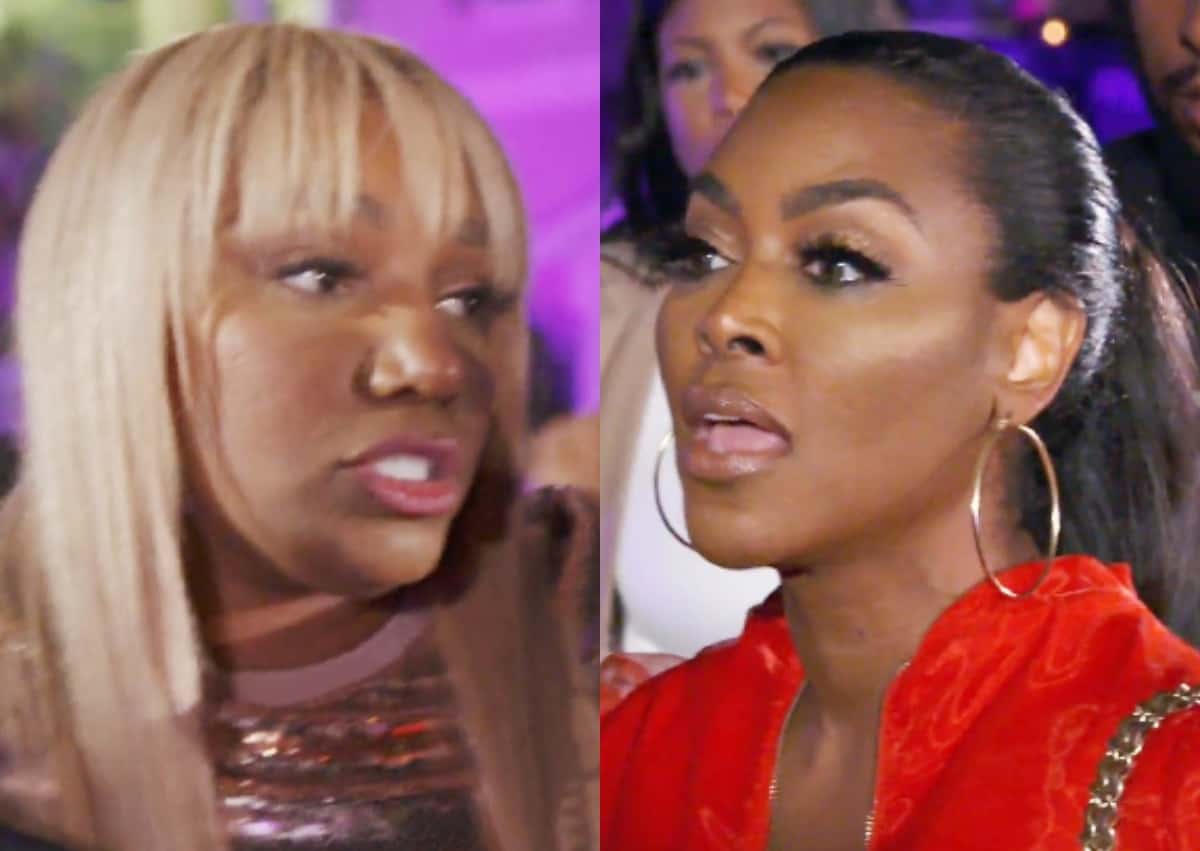 This week on the season finale of the Real Housewives of Atlanta, we have some Mama Joyce drama and Kandi’s baby shower. Phew! This was a long season. Let’s take our last bite of the season 12 peach.

Kenya visits her Kenya Moore Hair Care ad launch, and she seems really proud of it. We will see later on in the show that she also was throwing shade grenades at Nene to TMZ.

Porsha and her mom are chatting about their wine.  Is it tacky to add ice or something else to your vino? I personally like ice.

Eva is filming her beautiful family, and Michael is holding sweet baby Maverick. I am sorry but there is nothing sweeter. I swoon seeing him hold that adorable little boy #BabyBliss.

Noelle calls Cynthia to catch up, and she says she loves living and working in LA. Noelle has become a California girl. Cynthia tells Noelle her wedding date is 10/10/20.

Cynthia has to pick a coast since her daughter has rooted herself in California living with her fiancé. Am I the only one who finds this strange? I just don’t get my daughter living with my fiancé. They haven’t been together all that long. Odd, and in some ways a little creepy with all of his s lady friends coming and going.

Kandi visits the matriarch, Mama Joyce. Mama Joyce shares her traumatic story about not having a lunchbox. Okay, not sure where this is headed but someone will be shaded for sure!

Joyce’s mom gave her money for lunch each day so hence no lunch box. Another kid saw she didn’t have a lunchbox, and Joyce shared she had money from her mom. The other kid asked to see it and then stole it from her. So is this why Mama doesn’t trust anyone?

Mama Joyce wants Kandi to create a trust.  Kandi knows where her mama is coming from since she barely tolerates Todd. Mama Joyce definitely thinks Todd will try to steal her lunch money, too.

Nene is shopping in her closet. The cameraman better back off or she will blow a gasket. Nene picks out this ridiculous silver sparkly outfit for a baby shower? It is frankly ugly.

Nene calls Wendy Williams who couldn’t sound less excited about having to ‘slum it’ by talking to Nene. Wendy is asking about a TMZ interview with Kenya. She wants Nene to stop engaging with Kenya. Stop howling at Kenya’s nasty moon! When did Wendy Williams become the voice of reason?

Nene is already throwing out the bullying word. She questions if there is a marriage license? Nene wants to know where her eggs came from? Did she get them at an Easter egg hunt? Nene then goes below the belt when she questions if Kenya actually used her own eggs to conceive Brooklyn. The reason? Kenya’s baby looks like her dad Marc and not much like Kenya. Seriously, Nene?!

Todd is going all out for this baby shower. Who is this shower for? I hate to say it but it seems really superficial. Kandi said Mama Joyce is not coming to the shower since Todd dissed her at the restaurant. Storm clouds and a are a coming…

Nene comes over to Porsha’s house. She scares the crap out of PJ. Poor PJ didn’t know who that blonde lady stomping in was! She is a mini-me Dennis…with a bow. I love that I finally saw PJ smile! Probably because Dennis wasn’t around and Nene was bearing gifts!

Nene shares the dirt on the blogs where Kenya is shading her. Kenya said Nene has no friends. That is a strong possibility since I don’t really count Wendy as a friend. She is more of an ally on Reality Survivor island.

Porsha spoke to Shamea about the whole labor and delivery story. Shamea didn’t want to tell the real truth since the charity luncheon wasn’t the place to set the story straight. The real story, according to Porsha, is that Kenya was texted the day AFTER the birth to share the story about her water breaking. Kenya was just trying to upstage Porsha like she was a better friend to Shamea.

The theme for the shower was Hollywood glam. The ladies are looking for their sparkliest stuff. I get having a theme but it is a baby shower, y’all.

Kandi is talking to Kaela about New York. She already wants to move home. Kaela feels like Todd is giving her a light kick to get out on her own. I do really feel for Kaela — she seems closer to Kandi than her own dad. Sad.

Kandi is trying to decide on baby names. It is between either Blaze or Banks. The party guests are voting on the names. I kind of like Blaze — it is different.

Eva and Cynthia are taking photos on the walk and repeat. Uh, oh! Eva is leaking some valuable breast milk. Tanya arrives and she looks gorgeous in her purple dress. Marlo is dressed like usual with her big star earrings.

Kandi’s surrogate Shandina looks pretty in pink. They are so blessed to have someone like her to carry their baby. Little Ace wants to call his little sister Blaze. How adorable is he?

Kandi is sad her mom isn’t there at the shower. Todd did try to reach out. Mama Joyce wasn’t answering the phone. Kandi and Todd start bickering over how the whole situation played out. This isn’t the time nor the place to have this conversation.

Todd won’t apologize and make nice with Mama Joyce. They basically walk away from each other. Cynthia asks about the drama with Todd. The other ladies think he needs to respect her mother and apologize.

Okay, this is a bitter pill for me to swallow but I agree with Nene about the party. Having food trucks and a bar at an evening baby shower is a little peculiar. Okay, I said it: I actually for once agree with Nene!

Kandi panics when she thinks Shandina is escaping this shower for her. She probably realized this was just a televised event to film drama between Nene and Kenya.

When articles appeared on the screen about Kenya and Nene, I love that the headline is from Reality Blurb. That is an awesome shoutout to our site.

Marlo is adding fuel to that fire. She is fanning the shady flames to instigate more drama. She must be getting bonus pay to start trouble.

There is a party game where all of the guys have to do a limbo with a pregnancy belly. They are being really good sports about this. Dennis wins the contest. Yeah, he should; he is really good at getting down on it!

Nene is determined not to let Kenya ruin her zen. They bicker again over the bully crap, but Kandi breaks it up so they can make the shower about the surrogate. Please acknowledge the person carrying the baby!

Kandi keeps calling Todd to the stage and he finally shows up. The camera keeps flashing to the stage and the fight between Nene and Kenya. It is so messed up that these women can turn up a baby shower into a b–ch fight.

It was a little funny when Kenya was the grammar police with Nene. Nene said there was plenty of peoples who know Nene is no bully.

While Todd is talking on the stage, these two can’t behave. Kandi is right — it went from Hollywood glam to fight night. Security has to break that crap up. Nae-Nae needs to stop talking about dragging women in the street. Not cool.

Kandi FINALLY gets the moment to thank the surrogate for her sacrifice. Shandina gave them a beautiful blessing and this should be a celebration of her gift. It was everything but that.

Todd actually takes the mic and apologizes not only to Kandi, but also to Mama Joyce. I wish he had stepped up sooner so Kandi’s mom would have been there.

We have a name for Baby Tucker! I guess Blaze won out! Blaze it is! Little Ace got the name he wanted!

We then have the ending notes…

Kandi is finally staying home more. Thanks to the quarantine.

Kenya and Marc are still separated and going to counseling. Ugh!

Eva and Mike are trying not to have another baby. The custody issues are over with little Marley. Thank God.

Porsha still has no wedding date. Thank God! Cookie jar is closed, sometimes. Stop baking and then he will stop coming literally!

Nene has a new song, “Hunn,” and she is also looking at retirement. Bravo, please make that happen!

Cynthia is spending time with Mike in LA while in quarantine. This is about time.

Thanks for joining me on this Atlanta journey. We will have to see how they handle the reunion under quarantine. Take care and be safe!