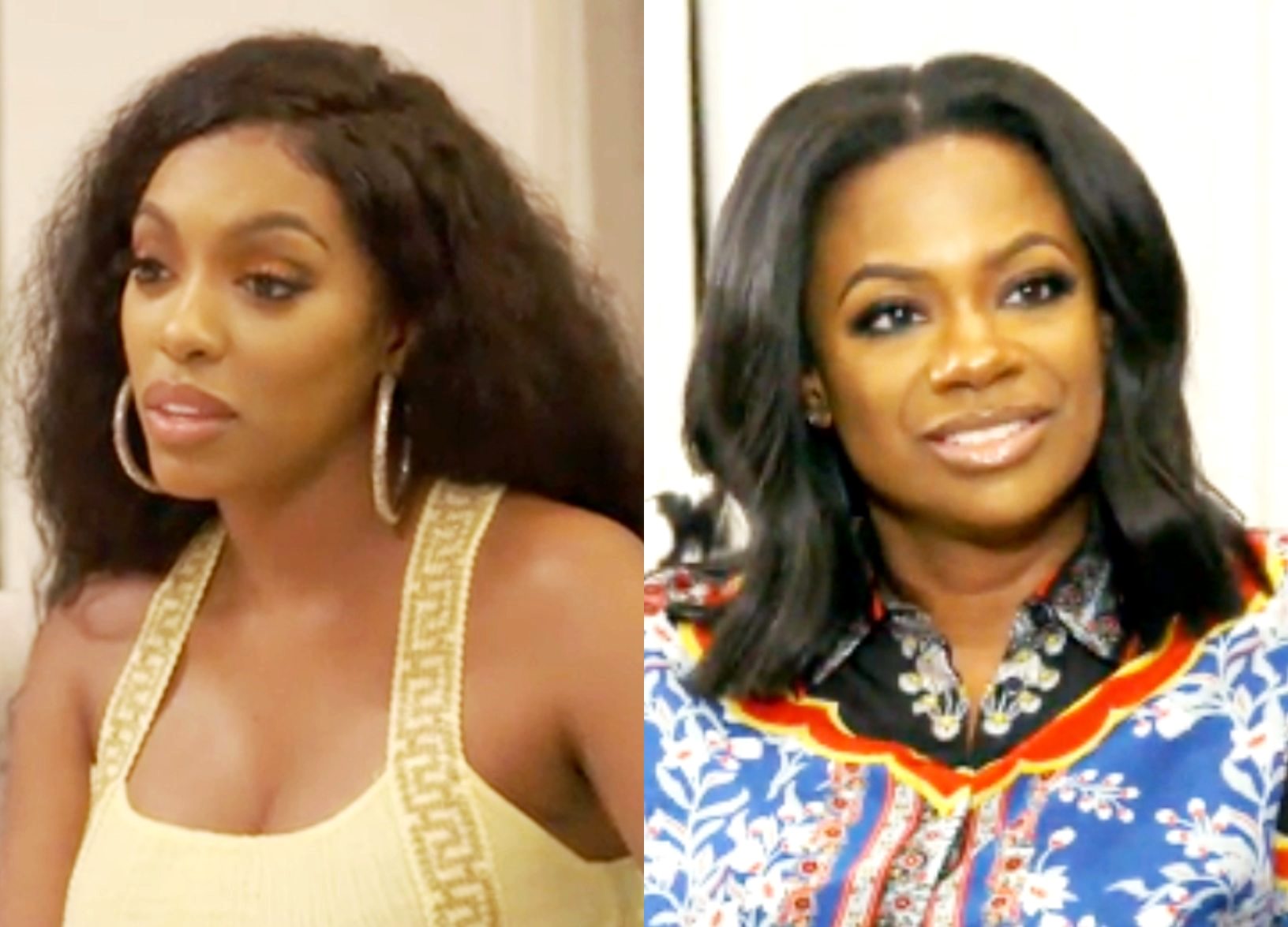 This week on the Real Housewives of Atlanta, Porsha and Dennis are butting heads over their prenup and Kandi is in marriage counseling with Todd to hash out their issues. We have Kenya looking for an exit strategy from marriage, Kandi trying to stay in hers, and Porsha trying to make the leap into it! Let’s dive into this dysfunctional pool of relationships!

Eva and Mike are finally moving into their new home. She really has a lot going on with a newborn baby on top of it all. Eva and Mike really have a good relationship. Seeing Mike with Baby Maverick is quite precious. Now that is some relationship goals there!

Kandi visits Kenya to offer emotional support. She lets Kenya know how Todd is at his wits’ end with her heavy work schedule. Todd is losing his mind having to share Kandi with her career. Kandi is brought to tears over her literally being cut into two.  She claims a lot of people depend on her. I am totally confident Mama Joyce is first in line.

Kenya and Marc are still at a standstill with her allegedly blocking his calls. I am doubtful she is the blocker. He ran back to NYC to his other Trixie — allegedly — and hasn’t looked back.

Kenya wishes she had what Kandi has. Kandi feels in comparison she and Todd are good. Kenya wants her to go make Todd his favorite salad. Maybe two salads, ahem, is ok under these circumstances?

Cynthia shares that Noelle is living with Mike in LA. She dropped out of college to pursue a career in acting… much to the dismay of her actor dad Leon although Cynthia is fully on board. It is strange that her daughter is living with her fiancée. I am not getting this weird living arrangement between these two. There are too many similarities between Marc and Kenya.

Cynthia is not willing to give up Lake Bailey at this point. She is going to have a Kenya-Marc situation if she doesn’t get this sorted out. Cynthia, IMO, needs to pick a lane. Maintain her independence or marry a player. It should be an easy choice. Team Lake Bailey!

Porsha and Dennis are chatting in their kitchen. Dennis shares that the commute to his business is rough on him. He refuses to move all of his things in. He doesn’t like the two-hour commute to spend time with his family? I would pack him up and send him back to his hot dog stand for good if I was her!

I Dennis doesn’t give me the vibe that he is committed to Porsha AT ALL. It is just pretty sad that some of the kids in this show are not treated as a #1 priority.

Every time they show little PJ, she looks so unhappy. I think she senses this dysfunctional vibe going on between her parents. It is pretty messed up that a little baby has a better bullsh** detector than her mother does.

Porsha still wants a wedding and Dennis doesn’t want anything elaborate. He is back-peddling big time! Dennis wants the prenup done before they talk wedding. Porsha is so pissed over this conversation that the hot dog man gets no cookies tonight in every sense of the word.

Nene and Gregg are getting ready for some sexy time to celebrate their 23rd anniversary, and for some reason, Bravo thinks we need to see this. We’ve got rose petals, food, stripper moves, and champagne. Gregg’s cancer really put a strain on their marriage. She admits they discussed an open marriage. I think there was a lot more discussed than just that…

Gregg doesn’t want anyone else eating out of his garden. He wants to film a sexy movie where he stars as Backdoor Billy. You might want to talk to Farrah Abraham about titling anything Backdoor…

Todd is planning the baby shower, which they’re filming on a movie set. The shower will have a Star Is Born theme. Todd is frugal but I doubt this will be anything but elaborate and over the top.

Kenya packs up Marc’s things and Cynthia comes over carrying her “Serial chiller” purse. Marc only sees Brooklyn when the nanny FaceTimes with him. Upon hearing about the lack of communication with Marc, Cynthia wants to cut up his clothes. I am with her as I would be jamming his shredded stuff into a garbage bag . Just kidding — about the bonfire part anyway.

I don’t get Cynthia’s claim of Kenya having the patience of a grasshopper. What does that even mean? Grasshoppers are known to have powerful legs to escape threats by leaping vigorously. When they see a threat such as Marc they don’t practice patience — they escape!

Eva’s new house is beautiful. Good for her! Eva sure gets settled fast in her new home. Cynthia visits and they are for now neighbors. It appears she isn’t inviting anyone else over to her new house…yet.

On a side note: they’re really icing Eva out this season. I know she has been pregnant a lot, but she hasn’t been included in a lot of the storylines this season. I don’t see Eva coming back next season #TooNormal.

Marley’s sperm donor, aka musician Kevin McCall, wants to get custody of her. Cynthia, don’t you listen to the internets? I have never heard that expression before. LOL.

Kandi and Todd have a counselor named Machel come over. He is a relationship counselor. I like his British accent. I could just sit there and listen to him talk. Very soothing.

Kandi shares the situation with the new baby. The counselor is probably thinking about what is going on with these two! Bringing more kids into this busy household!

Todd says they are more like business partners. He thinks her free time should be for them not for her friends. They have lots of great moments career-wise but spend none of them together. Truth.

Todd shares that Ace is really missing his mom. Very sad. He thinks Kandi treats the family as her lowest priority. Kandi thinks they both are busy working parents. It sounds more like they aren’t there for each other. They need relationship goals instead of career goals.

They argue over giving Todd’s daughter Kayla money for her birthday when he was upset with her. He thought she wasn’t being responsible and didn’t deserve a birthday present? I don’t agree with that. I was a strict parent but not giving my kid a birthday present is not a teaching moment IMO. Todd is too tough love and Kandi is too permissive. There has to be a middle of the road here.

Machel asks about their sex life and it sounds like it’s nonexistent now. They need some Todd & Kandi time. They used to turn it up and now it is more perfunctory. Not good especially since we know now that Todd has been out clubbing…

Next week on the season finale, we go to the baby shower, which Todd and Kandi are fighting at.  Nene and Kenya go at it again and the word bully is thrown out. See you all then for the end of this rollercoaster season. Take care of yourselves, and be safe!