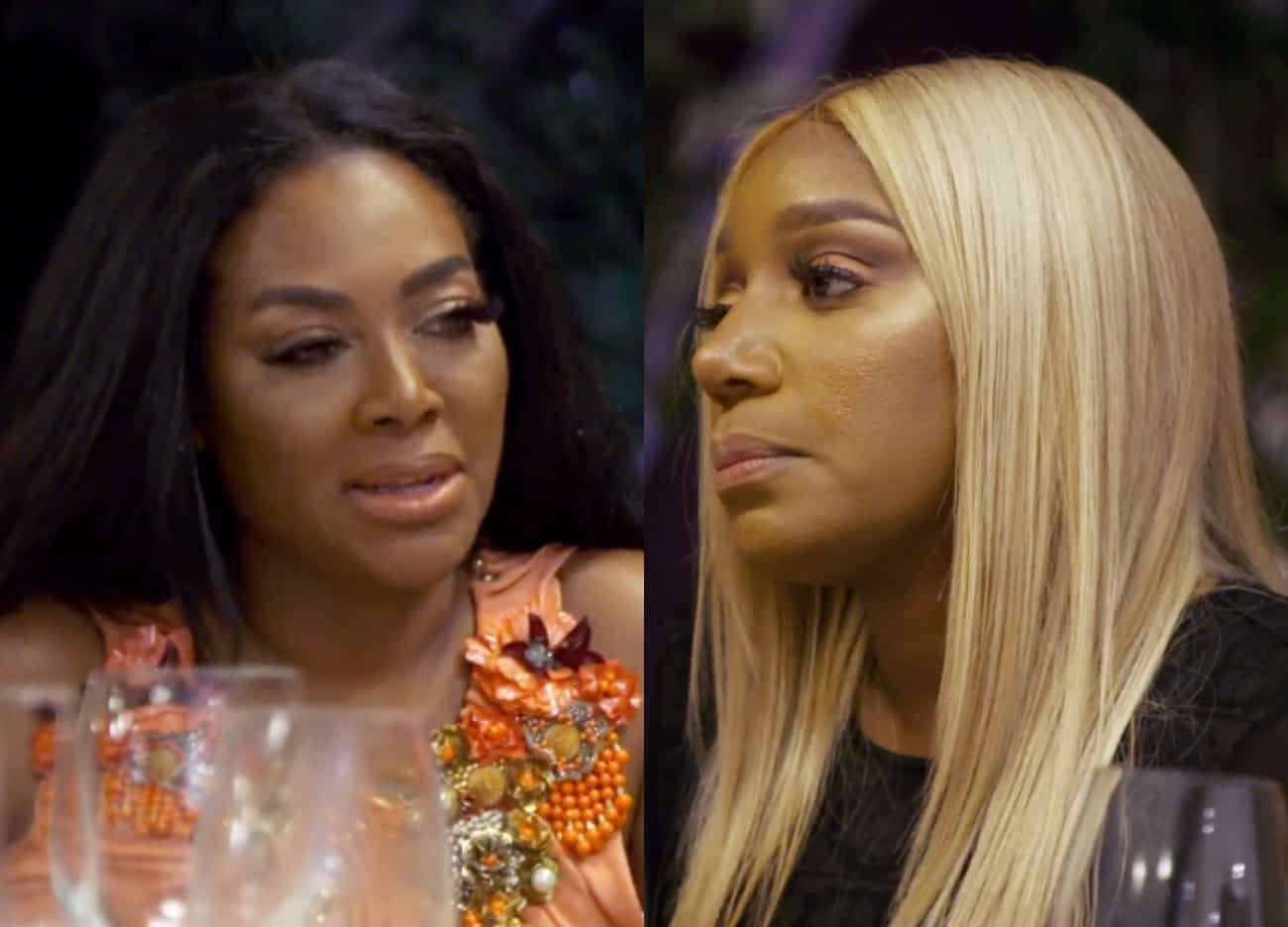 This week on the Real Housewives of Atlanta, we join the ladies after hearing Kenya’s divorce announcement. They are heading to Greece this week! Kenya’s divorce drama will be on the agenda for sure!

Wave coming, big tsunami is the music playing in the background. It should have been played before she married Marc! Kenya is now dealing with the devastation of her relationship tsunami. The ladies are all dishing on the Kenya divorce drama. Porsha is packing her giant red suitcase and gets the info regarding Kenya. She decides to text her to check on her. After hearing the news, Nene and Marlo can only wonder, was Kenya’s dress Dolce or not? #Labelwh*res!

Kandi and Cynthia arrive at Kenya’s house. They discuss the delicate issue while standing in the driveway. I am sure they are trying to figure out how to approach Kenya. They don’t want to get the door slammed in their face or .

The camera pans to a picture of Marc and Kenya. We then see beautiful baby Brooklyn sleeping in her crib. It is almost the bitter and sweet of their relationship. Kenya looks legitimately devastated. I am sure she is completely embarrassed her marriage was exposed as a fraud.

She shares that she was blindsided when HER publicist told her Marc was making a statement regarding their divorce. She claims he forced her hand so she had to try to save what’s left of her dignity. He couldn’t tell her himself? That sounds rather fishy. Who finds out they are getting divorced through their publicist?

Kenya claims he was criticizing every move she made before the event. He went for her jugular with his temper. She said he was very unhappy with her during the event. He told her that he didn’t even want her there . . In the car on the way home, things got heated and the Uber driver had to stop the car to kick Marc out since he was out of control… according to Kenya.

Kenya claims she discovered Marc was texting with another woman. This woman was well aware Marc was a married man. Mrs. Marc Daly actually called this woman to confront her. She told her, “I know where you live” —which was coincidentally in NYC. Shocker! Let’s be clear, everyone saw this coming. Stop acting, Kenya, like you weren’t totally unaware you had a douche-nozzle for a husband!

Kenya has been walking on eggshells, and frankly, no one should be surprised by this information. Anyone with eyes and ears could see he despised and barely tolerated her. Kandi and Cynthia do their best to comfort her when she breaks down crying.

Kenya doesn’t want to go on the Greece trip. She doesn’t want her relationship rubbed in her face. Gregg, Dennis, Todd, and Paul drop off their ladies at the airport.  Porsha is bringing little PJ and Mama Diane to Greece.  Upon seeing baby PJ, Nene calls her Dennis! LOL! I agree she is a total mini-me of her dad.

Marlo with her giant “Marlo” earrings is wearing her belly-baring top, but she forgot her bra when she got dressed for the trip. Kenya for now is a no-show. Kandi asks everyone to be sensitive to her if she arrives. Marlo just can’t resist if she shows. Nene thinks she is getting a taste of her own medicine after the cookie lady incident.

Upon arriving in Greece, the ladies are in the shuttle and they see Kenya walking outside with Kandi?  She didn’t want to go but decided to leave town in a hurry. She arrived early with Brooklyn and her nanny. Marlo is chomping at the bit to get the deets from Kenya. They discuss the room assignments, and of course, Kenya says there is a shady component. Cynthia claims she needs a private room since she and Mike need privacy so they can have sexy-time via FaceTime. I just think she needs to keep an eye on his wandering eyes!

Greece looks stunning and honestly it has been on my bucket list. I am glad this is the cast trip. They arrive at a gorgeous villa on the ocean. The ladies are surprised by all of the cats. Porsha in her ITM is thankful Dennis didn’t come since the pu$$y distraction would have been a problem… and I can’t decide if that’s funny or sad considering Dennis’ history! No doubt. Kenya has a room choice competition planned for them.

Since Kandi and Kenya are the hosts, they get the top two rooms. Porsha wishes they could go back to the days to racing to claim your rooms. We now have the Hunger Games-Housewife edition. Cynthia wins the mystery challenge. The next challenge is the makeup challenge including lashes. How will they survive without war paint and lashes? Nene accepts that challenge and gets the next best room after removing her lashes and makeup.

The next is the food challenge, and they have to eat the sardines and octopus PLUS swallow it. Marlo almost wins but Tanya gulps it down quicker. She wins the food challenge #gross. You know it is foreshadowing when Tanya says she likes all of the rooms except the jail room. Production will definitely make that happen now.

Porsha wins the jump in the pool challenge. She gets to steal a room and takes Tanya’s room. Nobody wants the jail cell room. Tanya, you should have not voiced that you didn’t want that room. You became the victim of this room robbery and you get the jail room? That sucks!

The ladies are getting ready for dinner. Cynthia and Nene chat since their rooms are connected. For some bizarre reason, Cynthia thinks Kenya will take relationship advice from Nene? She thinks Nene should share a golden nugget of advice. Sure she will — after she shoves that nugget down her throat.

Kenya is talking to the nanny who is staying at another place with Brooklyn. That is frankly pretty odd. Nene tries to engage Kenya during dinner. Kenya only trusts her ride or die friends, Kandi and Cynthia. Kandi discusses her acting part for the “soft stud.” She actually got the role of Douda’s estranged wife instead. Todd would have preferred she got the lesbian part, of course, but now he is forced to watch her make out with another man.

After Nene extends another olive branch to Kenya, she snaps it off. Kenya thanks everyone for their support except Nene. Kenya then breaks down into tears claiming she was blindsided by love? She obviously has very low expectations if she thought that was considered love #Sad.

Cynthia suggests some fellowship between Nene and Cynthia. Not a chance in hell that is going to happen. Marlo escapes the scene and grabs this big a** bottle of Grey Goose. Kenya doesn’t want to sit around the circle and sing Kumbaya with Nene. After Nene is snubbed again, she doesn’t want to be under Kenya’s bad skin anyway. After pressure from the others, Kenya brings Nene some baklava. I wouldn’t turn that down! Just eat and run, Nene! Nene is just not interested in making nice with her anymore. Nene is all “I fu**ed her man and stole her baby” as she ponders why Kenya refuses to talk things out with her.

Next week, Kenya is throwing shade at her dear friend Cynthia by suggesting she knows nothing about wine. Nene and Kenya collide and Nene wants to act like a camel and spit at Kenya?  It is about to get down and dirty in Greece!