Home Below Deck Below Deck Mediterranean Recap: Lara and Hannah Butt Heads Plus Captain Sandy is Back

Below Deck Mediterranean Recap: Lara and Hannah Butt Heads Plus Captain Sandy is Back 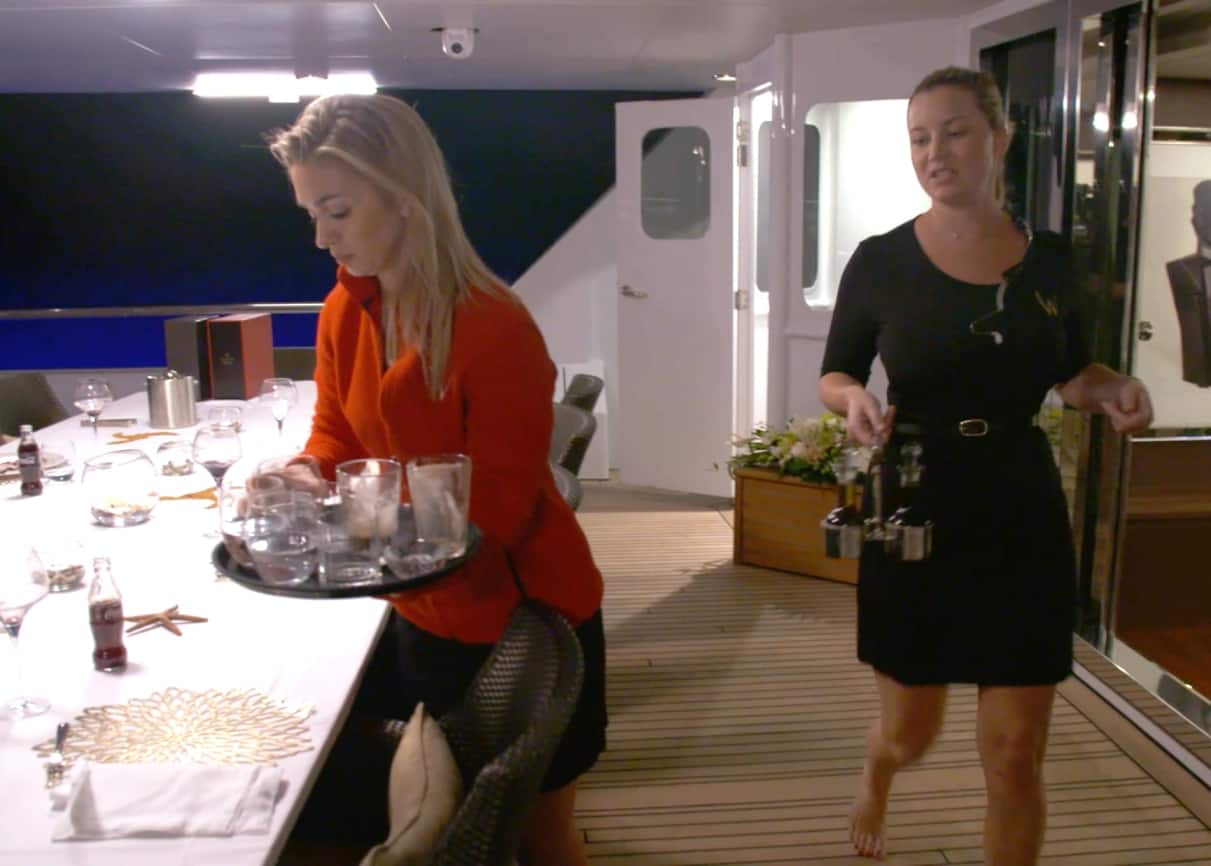 This season of Below Deck Mediterranean is set in Mallorca, Spain. A land of beauty…With a boat full of “boss b*tches.”

Captain Sandy awaits her crew 24 hours before the yacht sets sail. A familiar face is the first to arrive: Hannah. Let’s hope she has a better ‘tude than past seasons. Kiko, the chef, looks like a bumbling fool. A handsome bumbling fool, but a fool nonetheless. Being the chef on board comes with a lot of pressure — let’s see if this Ricky Martin lookalike is able to stand the heat in the kitchen.

Malia is also back working for Captain Sandy after 2 years. She claims she is a lot more serious about being the boson this go around, but only time will tell. Hannah seems a bit caught off guard bumping into Malia, as their past relationship crashed and burned a few years back.

“Just get American tattooed across your forehead and let’s be done with it.” Oh brother. Pete, The Unit, looks like he needs to get thrown overboard ASAP. Where does one even get sunglasses like those?!

We meet Alex and then Lara, the Italian, who seems as though she is about to attempt to overtake Hannah’s chief stew position. Rob, the other deckhand, is quite easy on the eyes, and Jessica, the jack of all trades, is the final arrival. Turns out that Alex and Jessica actually know each other from the last boat. Is it a good thing or a bad thing that there is some camaraderie already with this crew?

Once provisions are brought onto the boat, Captain Sandy calls her first meeting. She talks about how big the boat is and how much she wants to be impressed by her crew. No pressure. She has very high expectations, so everyone begins to get down to business.

Pete gets named the lead deckhand by Malia, and then in his confessional, he kisses his arm muscles and states, “100%, The Unit.” I think he sort of resembles Popeye, especially when he flexes. His muscles are turning me off. Spinach, anyone? We find a fun fact out about Pete, The Unit. He is actually a dad to an eight-year-old… he also shares that his son was the product of being with someone for one day. Who knew he could be so wild!

Hannah meets with the girls and you can tell there is already some competition between Hannah and Lara. Hannah attempts to play it fair between the two stews, but we all already know that Hannah picks favorites. Fast.

This guy named Chris Harris is the first charter guest. He is bringing along his siblings and his closest friends. It seems as though this is gonna be a fairly easy charter until Hannah realizes the beer never made it on board. Must be either a language barrier or stupidity on Lara’s part, but luckily the beer is found on another deck. Crisis averted.

After a long day of work, Rob and Jessica bond over a smoke. In the meantime, The Unit is throwing himself at Lara and I am experiencing secondhand embarrassment big time watching him move his arms just so that the muscles could flex ever so slightly. Gag. The only two not flirting with people on the yacht are Malia and Hannah. The girls talk about their relationships and we learn that Hannah actually DOES have a heart, as she has been in a long-term relationship for nearly a year.

The next morning, it’s go-time. The whites go on and the crew lines up, ready to shake hands and get the charter started. Hannah takes them on a tour of the incredible yacht, which is just utterly mind-blowing. The landscape is enough, but then you add in this yacht and wow.

Things DO NOT get off to a great start, as Alex doesn’t know what he is doing. Whoops. After much ado, the boat is off and Kiko is about to show them what he is made of in the kitchen. I hope he knows more than Jessica. The girl acts like a shot girl in college pouring eight seconds worth of tequila into the margaritas.

The food is taking entirely too long. It’s a damn shame that Kiko likes talking more than plating. The guests are about to eat their arms until finally, about an hour later, lunch is served. Captain Sandy shakes the guests down for their opinion of the food. When she pays Kiko a visit, she is blown away by her taste test.

While the guests are out and about on water toys, Lara and Hannah continue their passive-aggressive behavior. Hannah doesn’t even like Lara’s tablescape décor and we all remember just how key a good tablescape is to a charter…

Does anyone else wanna punch The Unit in the face? “Lara’s mine, fo sho.” Ugh. Please tell me she gets a say in this.

Kiko, the lover chef, may take a long time but his food looks incredible. Meanwhile, Lara is stuck cleaning the toilets and is less than pleased. You can tell her temper is about to flare up. It’s just gonna take one more thing to come out of Hannah’s mouth in order for Lara to lose it.

Dinner is brought out and everyone’s enjoying it…except for the head charter guest. No…no. He is not happy as he has a dry steak?! Come on. That guy is the epitome of having too much money and taking a stand on something not worth fighting for…particularly when all your other friends are chowing down.

As the steak debacle gets settled and the night wears on, so does Hannah’s patience with Lara. Lara was so busy enjoying a 30-minute dinner break that she didn’t bother cleaning up the guests’ table. Hannah has about had it with her behavior. She is pushed over the edge when Lara does not even acknowledge her, but instead, pushes past Hannah to begin the cleanup. Lara is p*ssed. And so is Hannah. These two are like oil and water. Hannah demands respect and Lara is not giving it. Yup. We are off to a good start.