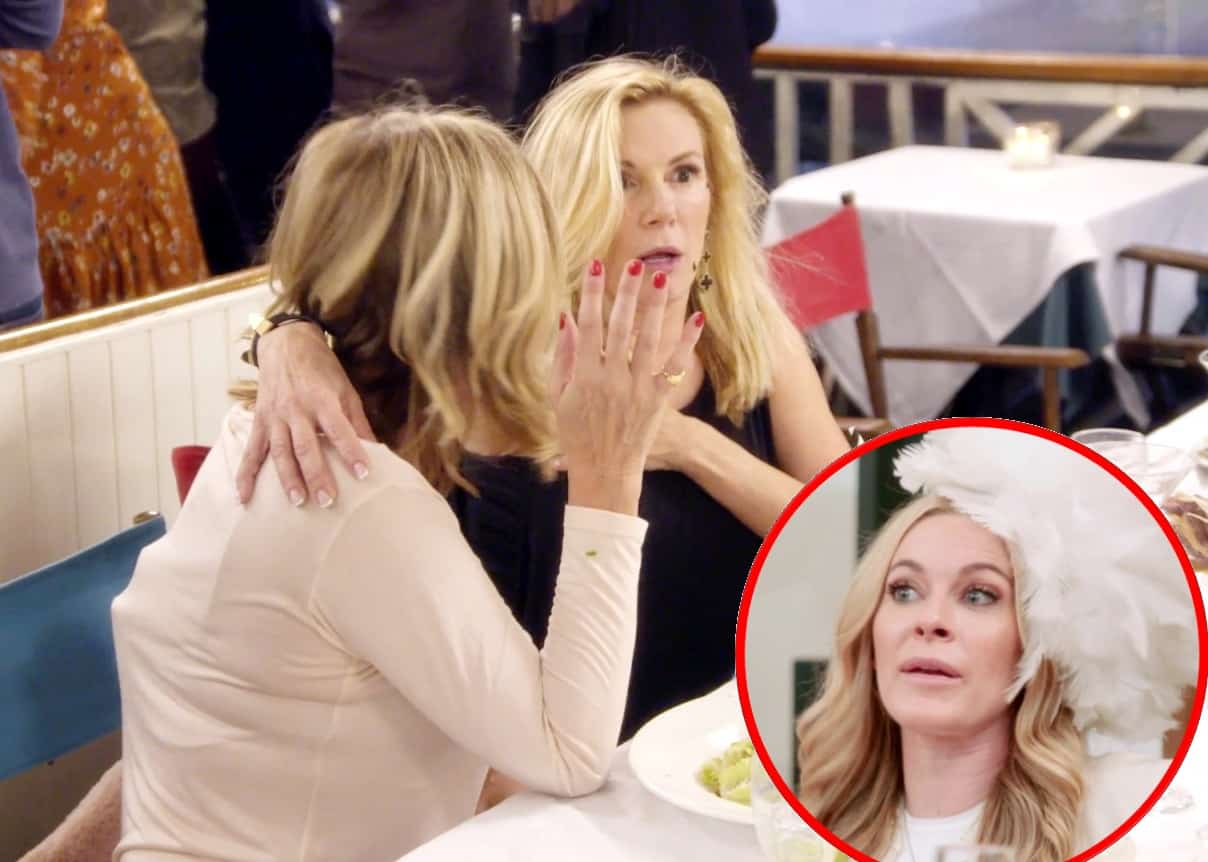 On this week’s episode of the Real Housewives of New York City, we are still in Newport. We are seeing the havoc created from Leah’s wrath. Let’s try to dig our way out of this wreckage, shall we?

After the to-be-continued, Leah is still explaining her actions from the night before. Elyse and Tinsley claim they didn’t witness the debauchery. I don’t know how you can lose your shit over a guy you refer to as “pita chip.” Elyse would like some of the crazy Leah in bed. She has a bit of a sexy naughty side that one since she does have an affinity to hunt for condoms and vibrators.

Leah’s sister Sarah arrives to meet the ladies. She has no idea what she is walking into. Sarah is going to want to run home to her crying baby to escape this insanity. Her voice sounds just like Leah’s. Elyse is happy to have another brunette in the group.

While Tinsley, Leah, and Sarah are doing a selfie, Tinsley shares she used to make out with her sister? Um, okay, didn’t expect that to come out of her mouth. TMI, I don’t think Mama Dale will approve of her sharing that revelation. The most drama she can handle is Tins’ hair being straight or curly.

Dorinda comes to Luann’s room after she has been drinking all day. Luann sees lots of red flags. Dorinda starts crying over hurting John. I am not quite sure who she is mourning, Richard or John? Luann is acting like a good friend right now. I like this Luann who isn’t so self-involved and behaving like a snooty countess.

The ladies head out to dinner after drinking all afternoon. The restaurant is owned by Tinsley’s friend. He won’t be taking reservations from her again after dealing with this group. This is going to be an accident waiting to happen. Ramona is already scouting out the bar. I love the other women’s impersonations of her awkward flirting rituals. SPOT ON!

Ramona spots a guy who she informs that he must have forgotten to wear pants. When he tells Ramona that he is from Arkansas, she acts all uppity. He regains her interest when he claims he works in national security. Ramona, of course, inquires if he is single. The guy claims he is engaged but his friend is available. She is not interested in him, though.

Tinsley is getting annoyed that the other ladies are hanging out at the bar and not sitting at the table. She basically wants them to stop hunting down di** like horny cats at the bar. Ramona could care less that her friends are waiting for her at the table. Tinsley tries to shame the engaged guy abut flirting with these women. Sonja and Luann are passing olives mouth to mouth. I am sorry, you just can’t make this sh*t up! Ramona is unbelievably rude to Tinsley when she tries to get her bug eyes to focus on her. She won’t even make eye contact with her. I would leave her a** at the bar.

Leah is hoping with her sister’s help they will be the honey to draw these guys away. She tells the pants-less perv to stop distracting her friends so they can eat dinner. This guy is such a prize that he could give a shit he is such a distraction to the other ladies. He finally leaves. Good riddance, and by the way, you are not all that, buddy!

Dorinda is speaking in tongues since she has been drinking all day and hasn’t eaten. Elyse has a good description of the barflies — she calls them the geriatric version of Girls Gone Wild. I am liking her a little more this episode since she can be witty.

Leah feels like are they hazing her for her behavior from last night. Ramona tells Sarah that she is guilty by association. Dorinda escapes the insanity and goes home to watch Ghost Hunters. There is a guy in the background who is wearing a scarf who looks horrified with these women. His expression is price$$$$. Sonja has squash over her ears to block out this nonsense. How do you even go out in public with these women and not suffer total humiliation?

Leah then decides to throw a ravioli at Ramona since she was nasty to her sister Sarah. I agree it was not very mature behavior but when has that stopped them before from acting cray-cray? Leah starts making out with Tinsley. They topple into the bushes outside the restaurant. What is it with this group — can they please stay out of the shrubbery? Leah will definitely fit in with this group and has NOW been officially indoctrinated into the falling into the bush club.

Dorinda comes to Luann’s room in the morning. She is craving comfort food. Luann tells Dorinda about the ravioli throw, and they can’t believe it escalated to that point. Dorinda is still sympathetic to Leah, though, since she gives her a pass since she is a single mom. What makes no sense to me is why she can’t give Tinsley a pass over seeing Scott on the sly?

Sonja, Ramona, and Elyse discuss Leah’s behavior. Ramona and Sonja’s room look like a hurricane went through it. I love seeing the tags still on Sonja’s pants. It is interesting here how the different groups break down the previous evening. Elyse thinks they should give Leah another chance, and I love how they describe Leah as a time bomb. This group really needs a reality check. They have ALL imploded at different times.

Leah tells Sarah that she is sorry that the women behaved the way they did. Sarah is miserable over how the evening went. You can tell these two are sisters since their interpretation of the night before is very similar. Sarah thinks the whole situation is like a piss in the ocean. I am not quite sure what that is supposed to mean? On another note, what’s up with the sunglasses? Did she put them on to disguise herself when she was pissing in the ocean?

Luann and her Cabaret producer Ben meet up for dinner. They discuss the format for her upcoming shows. I love her Marry (Bethenny), Shag (Sonja), and Kill (Ramona) answers. AGREED. This guy has definitely drunk the Lu Kool-Aid. He compares Luann singing her signature songs to Streisand’s performances to close the show? They decide to give Sonja multiple Jovani dresses to strip off during her number. Now that would be hilarious and right in Sonja’s wheelhouse!

Leah is having lunch with her parents. This should be a little awkward with her mom being upset with her. Leah’s dad is discussing all of his ailments with a burnt esophagus and stomach issues. He also has a  love for booze. You can tell where Leah got her boozy ways.  Leah is kinda-sorta honest about how she acted out on their trip.

Leah’s mom is not happy with her playing around with booze again. She downplays how she really acted. Leah acts like she was innocently doing cartwheels during dinner. That sounds innocent, right? My mom’s bullsh** meter would have gone off on that one! Leah’s mom doesn’t seem too comfortable on camera. I don’t get the impression she approves of her daughter doing this show. Just my opinion.

Luann and Dorinda are co-hosting a tea party on Dorinda’s building’s rooftop. The theme is Relax, Relate, and Reset. She thinks since there is no alcohol it should be drama free. Dorinda wants to keep it nice but they will need a lot more than a new theme to cure this dysfunctional group.

Ramona thinks this must be an etiquette lesson for Leah. I do love the theme and the table looks beautiful. Leah starts off apologizing. She will only apologize for her actions, not for her character. It is almost a sorry not sorry apology. I swear I hear violins playing when Ramona says she couldn’t sleep for four days over the drama. Please, Ramona, slow your judgmental roll. Like Dorinda says, “When you extend a scone you give her some jam!” Leah thinks her mama issues are commingled with her relationship with Ramona. Ramona would be my version of Mommy Dearest!

Tinsley comes in late looking like a Barbie Doll. The ladies change seats, conveniently sticking Dorinda and Tinsley together again. They step off to the side and discuss her relationship with Scott AGAIN.

Dorinda is interrogating Tinsley over Scott again. Please just let this go . Who cares if she doesn’t want to own up to the fact she isn’t over the guy? Dorinda has such an unnatural obsession with her love life. Why does she have friends who are spying on Tinsley in Niagara Falls? Is this the same source that found Tom at the bar lip-locked to another woman when Lu was in Miami?  Is Dorinda in the undercover detective business now?

Luann is more interested in what came out of the trip with Scott. Me too, share the deets, Tins! Would Bravo get this engagement storyline started already? Leah wants Scott to put a ring on it and knock her up! Please change the narrative, production!

Next week, Dale is making everything about her and living her life vicariously through her daughter, again.  It is also Halloween and the creeps are out in full force! Be safe and take care!