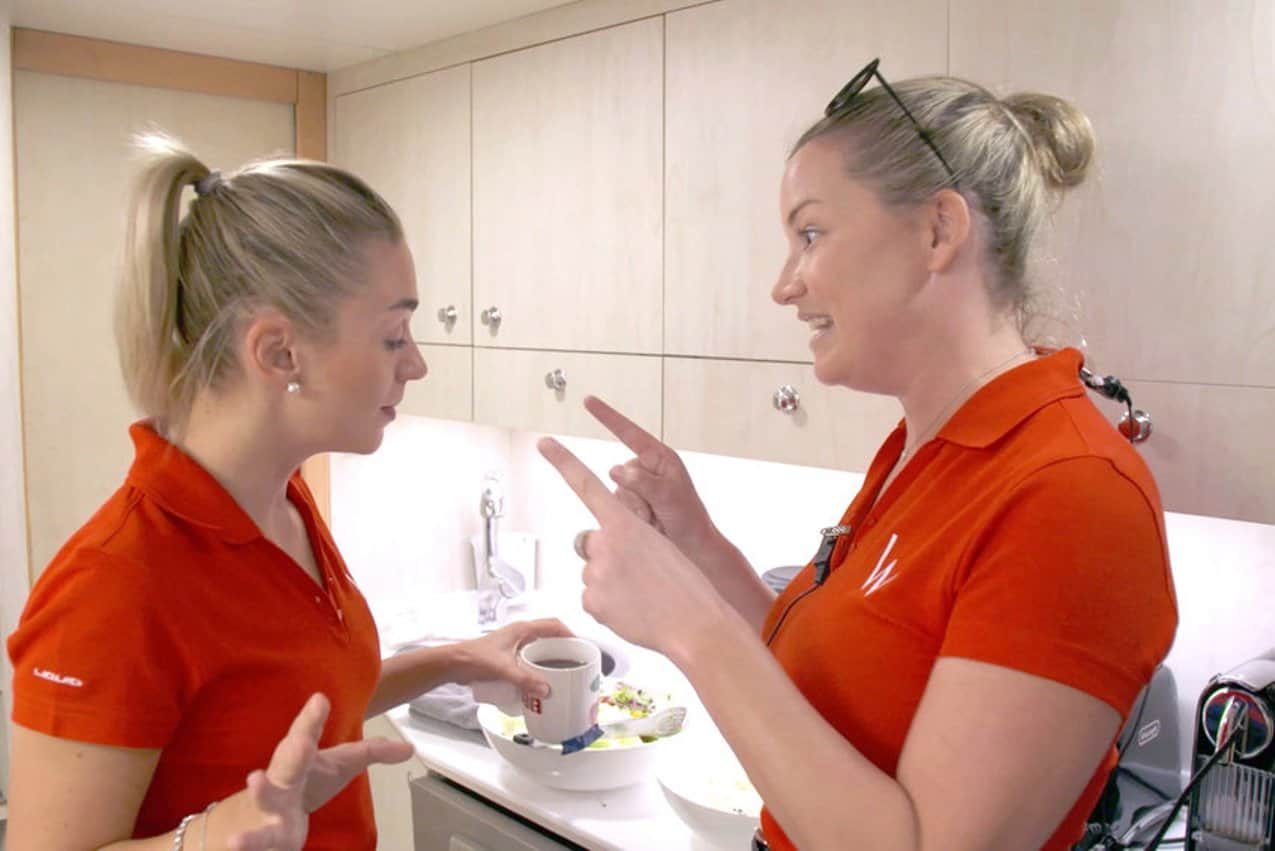 When the interior gets rocky, the whole boat gets shaken up on this episode of Below Deck Mediterranean.

On the first night of charter, things are brewing between Lara and Hannah. Lara “doesn’t have time” to show a little respect to her chief stew and Hannah can hardly believe she is being spoken to like that. Hannah punishes Lara by making her do the set-up in the morning, and I am so glad I am not on Hannah’s bad side…

Malia continues to struggle with Pete, the Unit, who appears to have issues with a female boss. Also, OMG, the Unit brings his dog’s ashes with him everywhere. Listen, I love my dog, but this guy is next level…with many things.

The next morning, it’s time for Lara to be on service. Her goal is to make it run so smoothly that Hannah won’t be missed. For a girl who thinks she should be promoted, Lara doesn’t do herself any favors. She is slow on service. She is not helpful. And she refuses to be corrected. Over easy eggs need to be Googled and things are falling apart. Kiko looks on and chuckles as Jess and Lara go toe-to-toe. It’s nice to see that Lara isn’t just a b*tch to Hannah. She is equally disrespectful to all in her path. Phew.

In the meantime, we find out some shocking news and I am not exactly sure why he admitted this information on television. Wait a minute. Rob was a drug mule for the airport? We find out about his past, his alcoholic mother, and her passing. Rob seems to have lived quite a colorful life…

After breakfast, Kiko comes clean to Hannah that there was a bit of a service issue between Lara and Jessica. Hannah is siding with Jessica 100%, which is easy because Lara is an absolute nightmare. When Hannah attempts to show Lara where to get something, Lara just gives up and walks away from Hannah….So it is evident she learned nothing from Hannah’s recommendation to respect her. Lara is just digging herself into the laundry ditch deeper and deeper every time she shows disrespect to Hannah.

I just don’t understand how Lara got this job. She is beyond lazy! Hannah is *this* close to throwing Hannah overboard. Lara claims that she is simply standing up for herself, but she def ruffled Hannah’s feathers. Lara walks in on Hannah talking sh*t about her to Jessica…whoopsie.

While the guests are out on the dangerous banana boat, Captain Sandy has a heart to heart with Lara. They talk about Lara’s experience and I can’t help but think that Lara lied about everything on her resume based on her actions. In classic captain fashion, she sides with the underdog and tells Lara to go onto service. I wish Captain Sandy was more involved with what actually happens amongst the interior crew…

First sweetheart. Then boss. Then master! Someone better tell the Unit to STFU before he joins Lara in the water. Malia is fed up with him and continues to put her foot down as a leader.

Lunch is taking a long time, the guests are becoming antsy, and the Hannah/Lara feud grows. Hannah directs Lara to go onto laundry and Lara spits back, “You don’t order me anything. You found the wrong one, dude.” Lara demands collaboration, but then outwardly disobeys. They go back and forth, and I am quite amazed by Hannah’s restraint. Somehow, she manages to not deck her.

Lara calls her issues with Hannah a misunderstanding and I am wondering why Hannah hasn’t gone to Captain Sandy about her behavior! Probably because she already knows how the captain rolls…

In other news, Hannah needs to direct her crew a little better. Even Jessica, her pet, is having a hard time figuring out what needs to be done. She is terrified of getting on Hannah’s wrong side when she can’t find the pantry and you can actually see Jessica sweating trying to figure it out.

I thought Kiko could honestly do no wrong…except the guy goes and forgets a plate…on OF COURSE the night Captain Sandy joins the guests for dinner. Talk about bad luck. Hannah plays it off that the reason for the “delay” in the food is because one guest asked for a half serving. Smooth move. Now if only the crew could supply the guests with steak knives. Sheesh. To celebrate the birthday guest, the crew Ices her and presents her with a carrot cake. Kiko is KILLING it.

Ah — the life of Lara — strolling in 30 minutes late to her shift the next morning. She is really sticking it to Hannah, huh? Malia and the Unit are also butting heads…Malia has had it with him and lets him know that SHE is the boss. I think it’s pretty clear Pete hates being told what to do by a woman. Also, the fact that this woman isn’t floored by his Popeye looks is def a blow to his ego.

After the boat gets docked, Lara asks to speak to Hannah and Hannah tells Lara it would be best to wait until the guests leave the boat. I cringe at the Unit flirting with Lara. If those two get together, it would be a match made in heaven.

Upon saying goodbye to the guests, it’s time for the cleanup. Everyone gathers in the main salon for the first tip meeting and Captain Sandy begins her compliment shower. Malia becomes emotional upon hearing Captain Sandy’s kind words and you can tell she is so proud of herself. You couldn’t pay me enough to do what they do on this yacht and even that tip will not change my opinion…

Afterward, Hannah finds Captain Sandy and they discuss Lara. Although Captain Sandy finds Lara’s energy extremely negative, OF COURSE she wants to give her a chance. Hannah is crossing her fingers that Lara straight quits, but the captain isn’t ready to give up yet.

#LaraLaraHannah. It’s time for the two enemies to meet. Lara greets Hannah with a, “What do you want? Tell me please.” Excuse me, what?! Hannah first reminds Lara that *SHE* wanted the meeting and then Lara explains that the more Hannah p*sses her off, the more b*tchy she gets. What a formula that is! How could Lara hold ANY job, EVER?!

Hannah has reached her limit. She tells Lara, “You’re disgusting,” and with that, she storms away and grabs the captain away from her cereal. I can’t fathom Lara sticking around for the entire yachting season, but then again, if Captain Sandy tries talking through these issues, Hannah may have to deal with the disrespect….

And in real-time yesterday, Hannah announced she is pregnant! In the comments section, she confirmed she is “5 months” along. Congrats to her! This might further explain her recent announcement that she is planning to quit the show.