Below Deck Mediterranean Recap: Lara Quits and Captain Sandy Reminds the Deck Crew Who is Boss 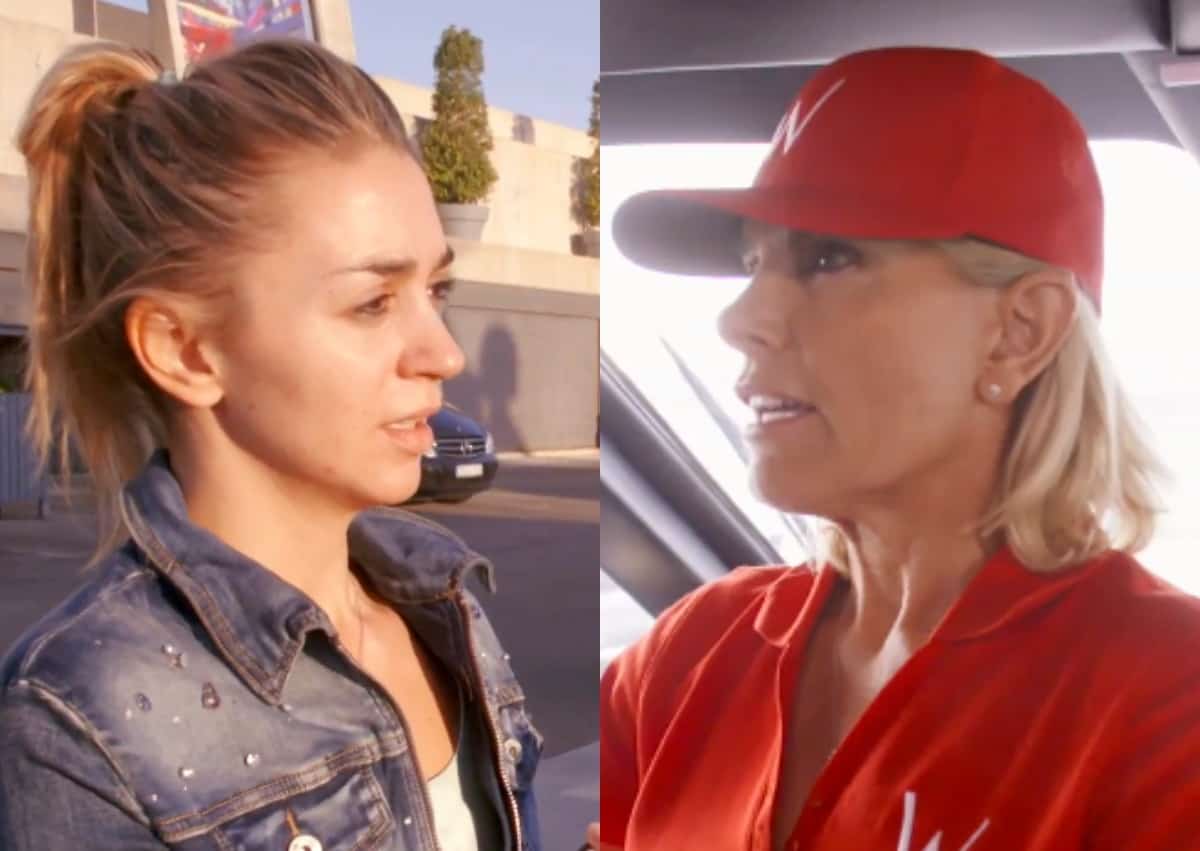 We lose a stew and get reminded to never call anyone “sweetheart” on this episode of Below Deck Mediterranean.

After Lara provokes Hannah, Hannah grabs Captain Sandy away from her cereal because things have gotten really bad. Hannah begins to explain the situation to her boss, but the captain cuts her off and wants to hear from Lara directly. When Lara showcases her snarky, sarcastic self, Captain Sandy understands exactly why Hannah is agitated by Lara’s behavior. The captain tells Lara to, “stop talking. I’m mad now.” The captain also lets her know she better turn her ‘tude around.

Lara smirks and says to Hannah, “Just be normal person and we can collaborate. Do you want to apologize to me?” I can’t comprehend how Hannah hasn’t punched Lara in the face yet. Seriously. Unfortunately, the girls have decided to start fresh and it appears as though, for now, Lara remains on deck. Bummer.

The boat gets to prepping for the next charter and Captain Sandy tries her hardest to get to know Lara over some grub. It’s basically like pulling teeth. Someone has to let Pete, the Unit, know that her name is LaRa, not LaNa, and that he, in fact, is not Fabio. Pete is dead set on the fact that he is gonna hook up with “Lana,” but she just does not know it yet…

As Jess and her tatas lay out, Captain Sandy calls Malia, Kiko, and Hannah in for a low-down on the newest charter guests: Roy Orbinson Junior, his family, and Ulf, an Ace of Base alumni! What a musical charter!

Ew. I cannot deal with the Unit. He is macking it to “Lana” so hard. When he talks about the crazy pump he gets post-workout, I nearly gagged. But upon hearing about his dad, who was recently diagnosed with cancer, I see another side of him. A softer side…which would certainly explain some emotional behavior later on in the episode.

It’s the first night out for the whole crew and the Unit is already getting close to “Lana.” They toast to charter one down and Pete gives some wonky toast about women bosses. He def does not think before he speaks and it is apparent that he has no clue how to take orders from a woman.

After dinner, it’s time to dance. We learn more about Hannah’s year-long relationship and she bonds with Kiko, who also has a significant other. They both understand that Lara has bad energy and it’s nice to see Hannah smile. In the meantime, Pete is romancing “Lana” by saying things like, “My d*ck is called Peter.” #Swoon.

Malia tries to talk some sense into Lara at the club. She knows how important it is to be a respected leader, and she knows that Lara is being defiant toward Hannah. Malia lets Lara know that if Lara was on HER team, she would have fired her. Funny thing is, we all know Captain Sandy wouldn’t approve of that…

Back on the boat, I love it when Lara shuts down the Unit. He is so ticked off that she did not hang with him after flirting all night. Maybe that’ll remind Pete that he isn’t all that and a bag of chips…no one is swooning over you, dude.

With only six hours until the next charter, Lara sneaks out with her sneakers. As the time gets closer and closer to the charter’s arrival, Lara is MIA. The crew goes about their business, but Hannah is sweating. She calls and calls for Lara (#LaraLaraHannah), and I have to wonder, is anyone else having flashbacks to last season with June…??

Just when I was starting to get concerned, Lara radios for Captain Sandy. She lives! In a classic Lara way, she makes Captain Sandy come to HER (typical) and she lets the captain know that because she is not comfortable, she wants to leave. Nice of her to drop the ball an HOUR before the next charter. Hilarious that she reminds us that she is NOT a quitter…yet she QUIT…?

Hannah is practically jumping for joy (until she realizes that means way more work for her and Jess). Also, it is a good thing Lara left because no one can even pronounce her name! Did anyone catch Captain Sandy calling her Laura? AND why is the Unit stuck packing Lara’s stuff? How convenient. Barf nation when he hugs Lara goodbye and tells her he dropped his card in her bag.

“Having Lara leave is kind of like taking ecstasy.” Hannah knows she is about to get screwed royally, but right now she is enjoying the Lara-less crew. Only one person is sad about Lara’s exit…LOL at Pete crying over Lara. HE DIDN’T EVEN KNOW HER NAME.

The show must go on, even with one stew down. Because kids will be part of the next charter (who brings KIDS on a yacht?! …at least they are bringing their nanny), it’s time for the stews to build a crib. Hannah better learn how to build a crib asap considering her recent news… No one can believe that Pete is a dad, but the guy can put a mean crib together.

The newest charter guests have boarded and the boat pulls away from the port. The weather is iffy and the waves are choppy. The deck crew continues to question all of Malia’s directions, especially with the blow-up slide. The Unit can’t seem to stop himself from calling his bosun sweetheart. Malia never says anything, but she talks under her breath and doesn’t address him.

Watching Alex and Pete play with the kids is cute and all until we realize that they are clearly just trying to get on the nanny’s good side. Just a thought: What’s the point of having a nanny on-board if the crew is entertaining the children and Hannah is asked to keep an eye on them as they sleep??

Things are getting rocky on board, physically and literally. The Spanish musicians arrive once they dock in Palma and Hannah huddles them in to wait to be called to perform. Except, they wait…and they wait. Hannah MUST be stressed AF. Girlfriend forgot about the musicians who awkwardly sit on the sofa awaiting the next directive. I love how Hannah calls it “mid-meal entertainment.” Let’s call it like it is….a f*ck up that she tried to pass off on the guests…successfully, I might add.

Pete continues to refer to Malia as sweetheart and Malia mumbles, “A dollar in the douchebag jar.” It seems curious that Captain Sandy knows just when to call Malia in for a check-up. Upon hearing Pete’s blatant disrespect to Malia (aka the sweetheart comments), she calls the deck crew in for a meeting. She reminds them that Malia is not their friend, nor is she anyone’s sweetheart. Captain Sandy ends her speech with, “If you don’t like it, get off…leave.” I can’t tell if Pete is p*ssed he got caught or if he is gonna cry…since that’s what he seems to do whenever he gets frustrated.

I just wanna know who the new stew is going to be…especially because it is someone that Hannah has already worked with. Maybe June…?