Below Deck Mediterranean Recap: Hannah is Displeased After Bugsy Returns as Second Stew 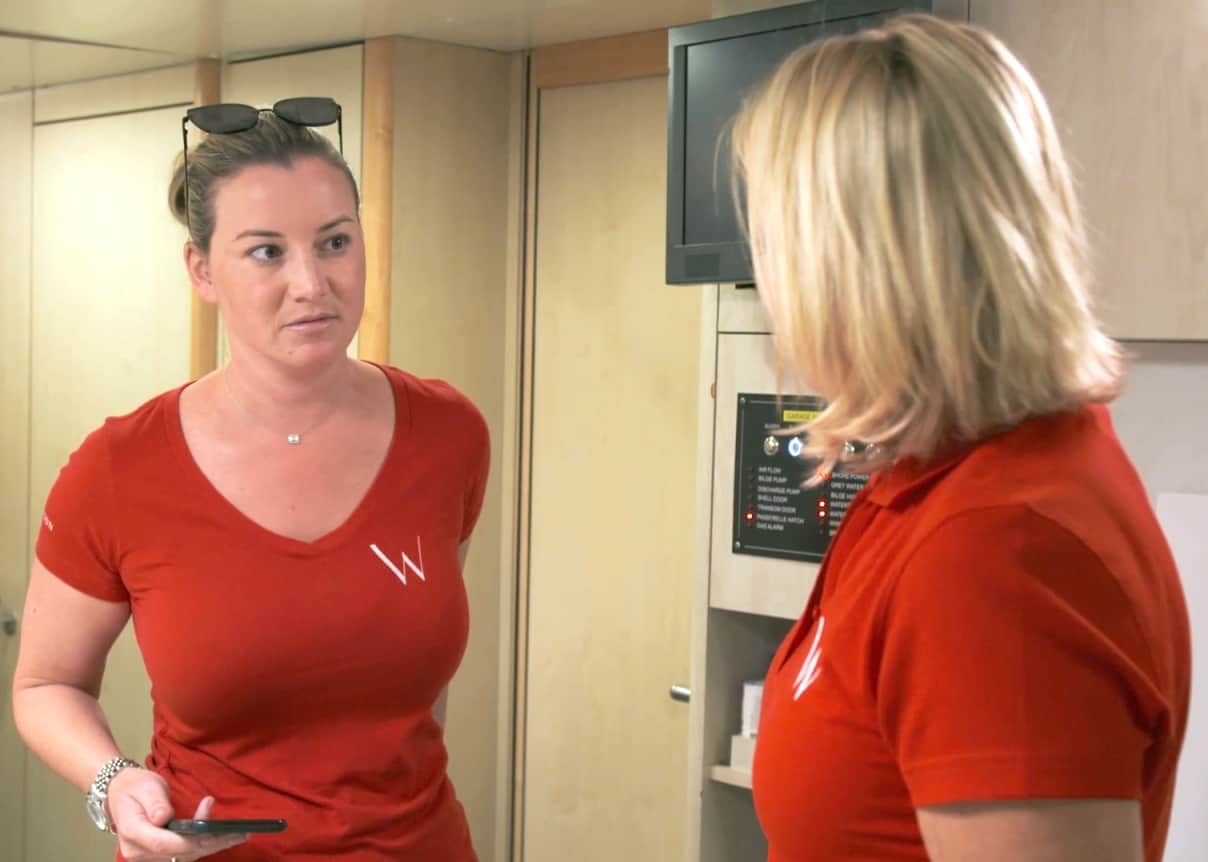 Rocky seas and the news of a replacement second stew shake things up on this episode of Below Deck Mediterranean.

So much for Pete, the Unit being edited out of the show, huh? Amidst his scandal regarding past racist remarks, Bravo has stated that Pete would be heavily edited from the season, but it’s almost as if he had *more* attention this episode. Negative attention highlighting his stupidity, but attention nonetheless. Not only does Pete not understand how to treat Malia, his boss, but he has such a chip on his shoulder. I love how Captain Sandy lays down the hammer on the guys and Malia suddenly grows a set in front of the captain.

LOL to Pete playing dumb. The thing is, he doesn’t have to PLAY dumb. He is dumb. Pete is the one who keeps dropping the sweetheart bombs, cuz ya know, he’s a “country boy from Virginia.” Yet he seems to have forgotten that he refers to Malia that way. Rob feels annoyed that he was grouped in that talk with Captain Sandy since he has always treated Malia with respect. This is the most animated I have seen Rob get!

With one stew down (peace out, Lara/Lana/Laura), the workload is heavy for Hannah and Jess. Hannah is learning the true side of Jess. Just cuz she is nice doesn’t mean that Jess is competent. Hannah is leaving a lot in her hands as it’s time for a picnic and Jess is on set-up crew. Also feeling the pressure is Kiko. Captain Sandy seems like she is just waiting for Kiko to bomb, but the guy promises to deliver all season.

Hannah brings the food to the picnic and has made a little friend with the primary’s son. It is so cute to watch her as we all now know that she is pregnant! Total mom prep!

Funny that Alex and Malia refer to Pete as “Sensitive Pete.” He mopes around after the sweetheart conversation and clearly he can’t do anything right. He messed up the tablecloth and broke glass during the setup. Thank goodness he gets sent back to the boat. Pete is so self-absorbed that he couldn’t possibly realize that he could do any wrong. I mean, Malia nearly sliced her leg open on the glass-filled garbage bag courtesy of Pete’s crummy clean up job. He has got to follow Lara’s cue and go!

In other news…Too bad Rob is currently seeing someone. I don’t care how “open” his current relationship is — he flirts with Jess as if he is a single man.

Just an observation: Maybe Hannah should stop calling Jess “honey.” Hasn’t anyone learned to just stick with first names on this boat? Pete is def the biggest offender of this. Speaking of Pete, could we NOT have a heart-warming Pete moment? No amount of meningitis is gonna make me sympathize with that guy.

Later, Jess is complaining, Hannah is freaking out about black dresses, and Kiko is whipping up yet another Brazilian dish for dinner. Anyone else think the dinner conversation was laughable? I mean, the guests are asking each other questions that they clearly know the answers to, but they def wanna show off for the cameras. I think it’s hilarious how the Ace of Base guy won’t STFU. Maybe if he saw the sign from Hannah’s facial expressions, he would zip it.

OF COURSE Pete wants the new stew to be hot. Let’s hope Pete doesn’t fall in love with the new one. We all know how he CRIED over Lara when he legit only knew her for like seven minutes…

The next morning, Captain Sandy loses her marbles over the laundry room. She goes off on Jess and it is apparent that Jess just doesn’t seem to really enjoy the whole work thing. That second stew can’t come soon enough. Just when it feels like the wheels are about to fall off, the weather has held up and the guests are able to enjoy the water toys for a short amount of time.

Can we all agree that this was, like, the lamest charter? The kids were actually the bright spot! Kudos to Malia and Captain Sandy for getting into the tiniest dock spot ever. Something tells me those ladies would be good parallel parkers.

As the crew bids adieu to the guests, a hefty envelope gets handed over and back in their reds they go. It’s time for the tip meeting. Captain Sandy seems pleased with the performance of the crew and the guests tipped accordingly. How bout when Rob tries to fist bump Pete? #played. Another interesting moment was when the champagne was poured, someone got some Red Bull instead…hmm…

Before they toast, Captain Sandy drops some news: BUGSY IS BACK YA’LL. Hannah looks like she saw a ghost and the captain reminds Hannah that although Bugsy is a chief stew, she will be coming on as second stew for these charters. Hannah is less than pleased that Bugsy is back, considering Bugsy previously called Hannah a lousy chief stew. She is truly showing her composure this season between the Lara drama and the Bugsy announcement. She has def matured!

Regarding the very obvious flirtation between Jess and deep-thinker Rob, Malia says: “Jess is deep probably in places…” OMG Malia! I think it’s so funny that Alex is so friend-zoned that he talks about Jess like a true bestie would. So much for Rob’s girlfriend, huh? A night in a twin bed and poof…what girlfriend?

Remember when Malia told Hannah their relationship wouldn’t change when Bugsy comes on board? Oh, Malia. You liar! You can’t help it. Bugsy is legit Malia’s friend and it’s so obvious that everything will change. Malia knows Bugsy’s FAMILY for crying out loud. The lines are def drawn. Anyone think that perhaps Malia might’ve mentioned that Bugsy was free to Captain Sandy??? Also, does Hannah actually like anyone?

Rob is certainly smiling pretty big the morning after his “cuddles” with Jess! It is clear that he had a *good* night with her. How bout Hannah’s YouTube pep talk about being a good leader? The poor girl. Hannah has nothing but negative expectations regarding Bugsy’s arrival and it’s pretty symbolic how a storm comes in juuuust as Bugsy makes her way on board. Could Bugsy wear one more accessory? She is the epitome of extra. When we see Malia run to greet Bugsy and her prints, it is very clear that things are most definitely going to change on the yacht…