Below Deck Mediterranean Recap: Kiko Cooks 72 Plates and Rob Breaks Down as He Opens Up About His 10-Year Sobriety, Plus Are Bugsy and Alex Hooking up? 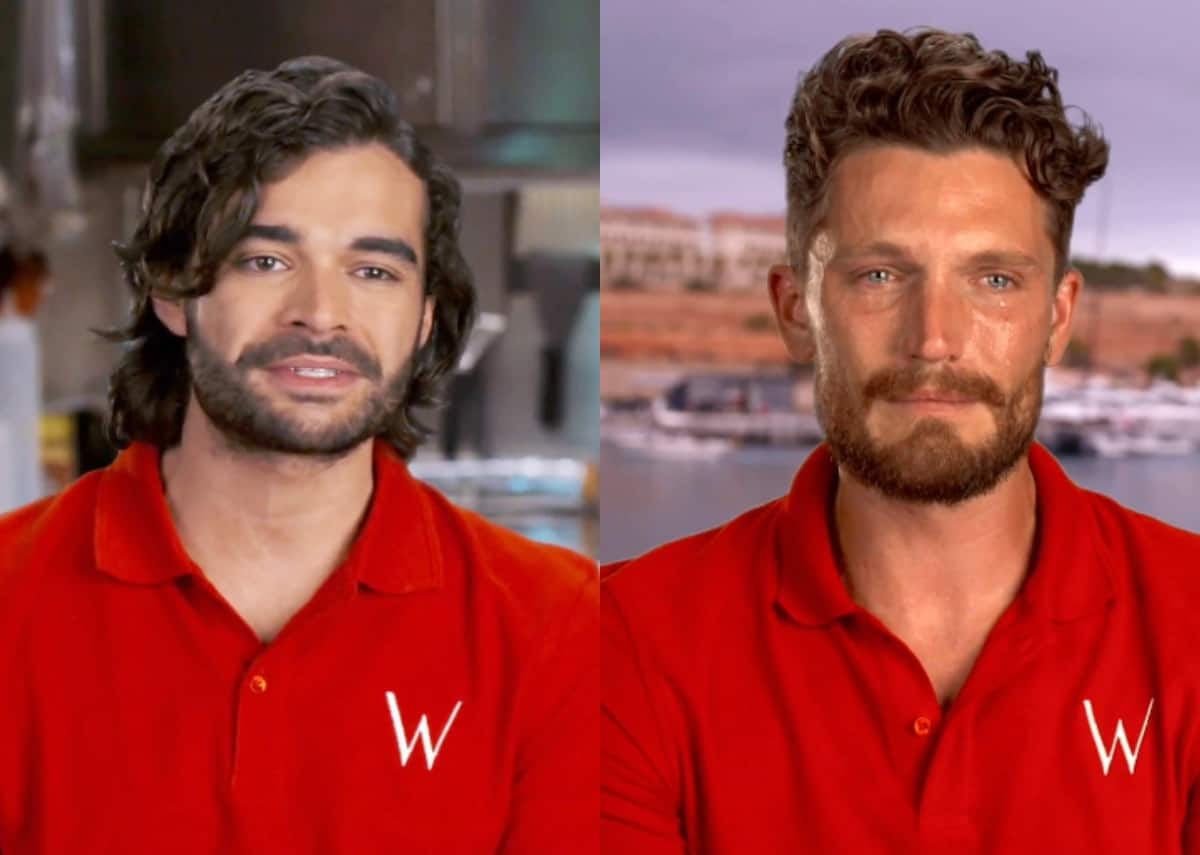 The crew works together to pull off an epic meal and a drunken night out leads to some flirting on this episode of Below Deck Mediterranean.

On the second day of the charter, the pressure is ON. Kiko only has to make 72 plates for dinner, and in Hannah’s words, the whole thing is a “complete cluster f*ck.” There is no communication between the crew and it appears as though the wheels are falling off. The beach trip was awful and I can’t help but think that it’s foreshadowing for the dining experience yet to come.

Luckily, with Bugsy on board, there are more hands on deck. Hannah admits that Bugsy is a pretty strong second “chief stew.” LOL. Good thing Bugsy is there, cuz really, what good is Jess? The girl doesn’t even know what napkins are and she always looks confused. She must still be love-struck from her make-out sesh with Rob.

Could Captain Sandy be any more annoying? She takes micromanaging to the next level. Like, leave Kiko alone for crying out loud. The guy legit has to make 72 plates. 72! Bravo to Kiko for saying, “I need to concentrate.” He basically tells her to STFU without being toooo disrespectful.

I’m sorry. Did Pete really say, “Allowing her to have that control is hard?” ALLOWING? He is the worssssttt. He just doesn’t like that Malia is in charge and that he is bossed around by a woman. Being a father and taking care of his father has nothing to do with his control issues if you ask me…

The thing that stinks is that these guests have been drinking all day and they don’t seem like they would be truly appreciative of Kiko’s international menu. Kiko should have gone to the captain regarding the potential sh*tshow about to commence. There are not even enough provisions for the guests + their random friends. Kiko is bonkers for trying to win this one, but I sure am rooting for him!

Messy Jessie is totally getting herself in quite the mess with Rob. She is clinging onto him for dear life and hopes he isn’t like the other guys she has dated before, buuuuut I am pretty sure Rob has a GF, so what category does that put him in?

And so begins the 72 plates. Kiko kicks it off strong and the guests are impressed. Captain Sandy behaves like a smothering mother, lurking in the background, making sure all is running smoothly. What a creeper. It’s a good thing that everyone is really pulling their weight and helping Kiko because the captain is certainly watching…

Malia and Pete continue to butt heads. Pete is impossible. He blatantly chooses to do the opposite of Malia’s requests and he reminds me of a rebellious teenager who purposely disobeys his parents.

Talk about dining and dashing after that meal!! Those randoms the guests picked up really knew how to milk the situation, huh?? With full bellies, they jet off on the yacht…and will clearly never be in contact with anyone from that boat ever again.

Side note: STOP WITH THE PETE/Lara TEXTS. It is bizarre and awkward and uncomfortable watching Pete salivate over them. Yuck.

Snacks? These guests need late-night-snacks? They just had a six-course meal, but they need SNACKS? They are behaving like frat boys, and once again, Alex and Hannah are up waaay too late chaperoning the party animals.

Six a.m. comes fast for the crew and they are up and at ‘em on the final day of the charter. It appears as though Pete has nothing better to do than harass Bugsy.

Pete: “I’ve been up since six and this is my second application of sunscreen. Damn, Daddy.”

OMG. He is GROSS. It is hilarious watching Bugsy shut him down over and over again. It is also pathetic to watch Pete think he is being sexy and flirtatious, when in reality, he is gag worthy.

The guests are departing and I am having a hard time taking the primary seriously as he lugs his dog off the yacht. Sure, the guests can talk like they are ballers, but their tip is whack! Kiko KILLED himself banging out that six-course meal for TWELVE people and everyone had to deal with their demanding ways. The tip was pretty lousy, considering there were 27 randoms on board and that the guests worked the hell out of the crew while complaining about oysters the entire time.

The weak tip is not gonna get the crew down, because tonight, they are getting ready to rage. I am terrified of Pete’s behavior after a few drinks. He constantly tries to undress Bugsy with his eyes while SOBER!

Question: Can Bugsy fit one more hair clip on her head? Another question: Can Jess be any more clingy with Rob? Over dinner, Pete feels like he is missing his chance with Bugsy as she sits next to Alex and chats it up with him. Pete looks like a mopey puppy and explains, “I am not jealous. I’m just missing Lara.” Blech. Didn’t he only know her for like 15 seconds? I love how he is texting Lara during the dinner. WHY ARE WE STILL SEEING SO MUCH PETE?

Finally, the topic of Rob’s girlfriend comes up. I love how Rob just pretends like he doesn’t have a significant other, yet he posted an Instagram story about missing this chick’s “touch.” Hannah goes right in there and confronts him about this, but Rob makes it clear he has called it off with the other woman. Jess, you’ve got the green light.

Alex trying to protect Bugsy from Pete is adorable. I wish she would look at him with heart eyes… It’s hilarious watching Bugsy explain her style to Alex as “subtle,” particularly when she is currently wearing every accessory Claire’s ever created. Later, Hannah and Bugsy sneak away at da club and have a moment. The ladies discuss how Bugsy is there to support Hannah and Hannah agrees that there is a bit of mutual respect happening. Look! The kids are all grown up!!

Whoa — there is a lot of drinking going on right now. Bugsy is coming in hot, and once back on the yacht, she hops into the hot tub with Alex. Alex tells Bugsy, “We are like low-key in love,” and it is priceless that they didn’t even turn on the heater yet were having a drunken good time. Come on, Malia, way to be a c*ck block.

On turnover day, Bugsy is HURTING. She cannot even remember if she smooched Alex, and now she is not only hungover, but she is also mortified. At least things aren’t awkward between Bugsy and Alex. The fact that they can joke about it is pretty awesome, and it just shows what a good guy Alex is.

Rob shares with Jess that he is 10 years sober. She didn’t know what NA was and I wanna smack her upside the head, particularly after watching Rob’s emotional confessional. What a powerful tale. To find out he was in rehab WITH his mother is pretty heavy.

The fact that Pete talks about himself in third person is totally disgusting. Pete then proceeds to try and show off in front of Bugsy and tell her all about his infatuation with Lara, the previous second stew. He goes as far as saying all of the things he is gonna do to Lara when he meets up with her, as if Bugsy asked OR as if she wants to know! Pete states, “I’m gonna undress her with my teeth.” EW EW EW. He is a nightmare! Shameless Pete. Party Pete. All of the nicknames. All of the NO. Pete, maybe you should stop “just banging” your stews and learn what chatter is acceptable and not acceptable in the workplace. He is the WORST.

I wish Pete was the one who smashed his finger in the door. Poor Jess! Just when the interior seemed to be under control, Jess gets injured…injured bad. Fingers crossed we don’t lose her on the next charter…