RHONY Recap: Cabaret Drama at Blue Stone Manor! Plus Heather Thomson is Back! 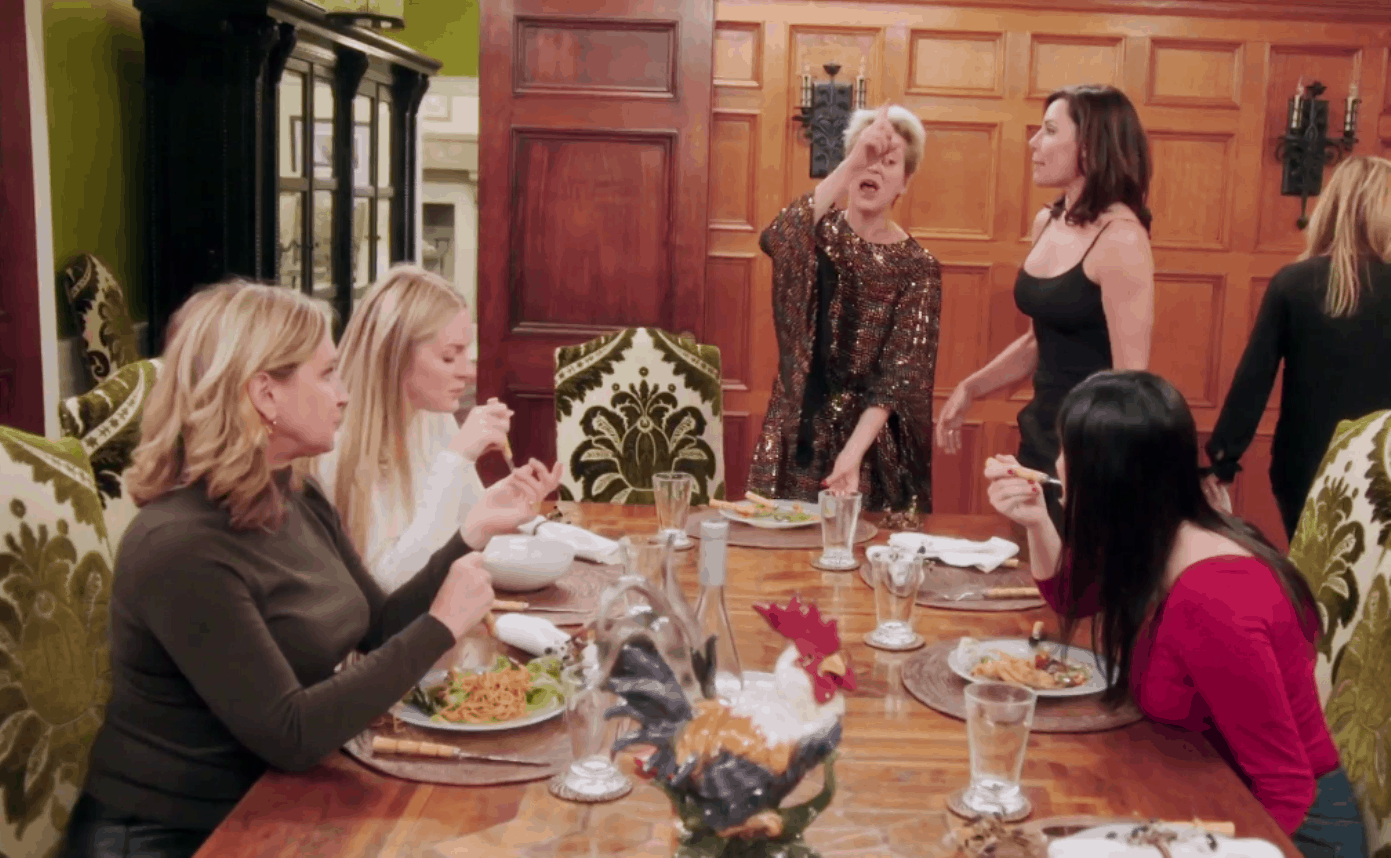 This week on the Real Housewives of New York City, what could possibly go wrong with alcohol flowing while the ladies are staying under one roof at Blue Stone Manor? Let’s see what drunken debauchery will occur in part two of the Berserk-shires housewife edition!

We pick up 40 minutes after Sonja got fired from the cabaret and was called worthless. The shark is laying in the hallway thankful he didn’t have to sleep with any of these shrews! Ramona just casually walks by it just like it is normal to have it laying in the hallway. She greets Ben, the restaurant delivery man. She goes into some spiel describing how she can’t help him carry in the food since she is so clumsy. Ramona will say anything to get out of work, Ben!

Dorinda, who is dressed for dinner, is all decked out in Studio 54 wear. Luann catches Ramona defending Sonja and her burlesque skills. She corrects Ramona that Sonja is not a major cabaret star, darling. Dorinda is trying fruitlessly to get Luann to tone it down.

Sonja hears all of the nasty comments coming out of Lu’s mouth. She is slurring and you have to wonder how much she will remember the next morning. Luann is defending herself to poor Len. She doesn’t need Sonja’s boobs and a** hanging out at all of her shows. I think Len just wants Lu out of her kitchen. She will nod and agree to anything. Ramona shares that Luann is making a boatload of money?

Dorinda and Luann go at it, and Luann has to throw out the grenade, “You are drunk!” Dorinda retaliates with, “You have a drunken mugshot.” BOOM, shots fired, hit the floor! I noticed that production was captioning Dorinda when she was slurring her words. Super-shady! I love it!

Luann is sobbing and goes to her room to pack to go home. Dorinda thinks karma is a bit*h as she pours another drink. YIKES! She is totally unapologetic. Dorinda again has to remind Luann that she gave her that giant “Jovani” bag as she is escaping out the front door. Okay, I have to say I don’t like it when someone gives you something to keep and every time you piss them off they throw their generosity in your face #notcool.

Leah tries to stop Luann from leaving. She doesn’t understand all of the Jovani references when they fight. Maybe Luann should be paying Dorinda royalties for all of the Jovani swag Dorinda has given to her? Luann, who feels defeated, decides instead to go to a pub. Luann does seem really upset over what happened with Sonja and Dorinda.  Sonja, who has been clearly over-served, is falling out of chairs and barely coherent. I am just relieved she was wearing pants. When Leah asks Ramona for help Leah has to pry Ramona from Sonja’s lap.

Ramona is trying now to get Luann to stay. She even gets hijacked to go to the pub. Can you believe it is only 8 p.m. and the night has already been ruined?

We then see Ramona and Dorinda in the morning, and surprisingly they look refreshed. I want to know what kind of booze are they drinking and what the hell is it infused with? Elyse comes in Sonja’s room and she is also fresh as a daisy.

Leah shares that they had a good time at the pub. Luann tried to sing at the pub but they weren’t interested in her performing. Leah was flirting with the bartender. Luann was dancing and trying to get the patrons to notice her.

Dorinda calls Luann, who is staying at a hotel to make nice. Nobody wants to confront Dorinda on how she acts when she drinks so it is one of those let it go moments, AGAIN. Dorinda just blames it on the rosé.

I am just relieved to see poor Len is still in the kitchen and hasn’t quit yet. Leah actually is recognized as the best behaved from the night before. They do have really low standards. Sonja shares they went and saw Richard at the cemetery the day before and maybe that triggered Dorinda? I think it is a wicked combination of booze and heartbreak.

The ladies are heading into town to go shopping, and Leah, Ramona, and Luann join them on the way. Ramona commiserates with Luann about how Dorinda eviscerates her friends. Luann thinks she should have just played dead like Ramona and maybe the Dorinda storm would have passed over.

Luann, Dorinda, and Sonja hug it out so I guess they chalk it up to just bad rosé? Sonja gets rehired for the cabaret show. Luann tells her she will pay her more when she can. Sonja just wants her time appreciated. Don’t we all?

Leah shares that she and Luann made out the night before? What was in that rosé’? Luann has no memory of that happening. They check out a wine and cheese shop. That looks awesome!!! Dorinda shares they have Colin Cowie cooking for them tonight. He apparently is also a friend of Oprah. Sonja also had sex on his yacht. Of course she did. She also has to share that Frenchie is still in the picture in France. Yeah, of course, he is there waiting for you to arrive, Sonja! Keep living in that delirious bubble!

Elyse is really on the perimeter of this episode for now. Leah shares with Sonja and Elyse that she peed on a prince? She met him in Spain and then peed on him in NYC. Was she marking her territory? The sex stories these ladies randomly share are just plain bizarre.

There is a beautifully set table for this group. What a waste of good tableware! I wouldn’t waste the good china on this group. Le sigh.

Ramona has plugged up Dorinda’s toilet and doesn’t know how to use a plunger. She recruits Leah to plunge it. Ramona denies going #2 but we all know she did since Leah sees it floating in the toilet. Dorinda gets wind of Ramona backing up her plumbing. Ramona is clearly full of sh*t and the likely suspect. Leah is just happy she is constipated so she can’t get blamed.

Sonja is literally buried in bubbles. I swear she lives in a virtual reality where she is still on a yacht in the French Riviera with John John and Diddy. Maybe living your life in total denial is her way of coping?

Ramona decides to bring a breathalyzer so she can test the others and know when to cut them off. She thinks that is going to help control this group? Luann proves she is a pro at blowing . The countess does have some experience there.

Dorinda’s sister Melinda arrives for dinner. Leah is texting with the bartender from the pub. She really wants some d*ck and invited him to dinner. Leah thinks bartenders are multi-purpose — they can be eye candy and get you drunk at the same time! Double-threat! Dorinda is fine with Leah inviting the bartender since she used to work at the Red Lion pub too. This is foreshadowing since you know she is going to corner this poor guy.

When Elyse drinks she has an alter ego called Erica. When she worked on Wall Street she used to drink, and Erica, the party girl, arrives. Heather Thomson and her husband Jon arrives. She does look good and happy. I used to like her on this show since she was real. When Ramona gives Luann a compliment, Heather is shocked that she can say something nice. Ramona has to make it backhanded since she says you can perform but anybody can sing. Nope, don’t agree with that.

Leah and Sonja are hitting on any available men. They are checking their potential victims for rings. Dorinda greets Heather and apparently they have remained friendly. Good for them, and it’s frankly rather surprising. You would have thought Heather would have distanced herself after leaving the show.

The ladies are chowing down on all of the food. Dorinda is gnawing on the rack of lamb. Ramona is chatting with Dorinda’s friend Sam. He is encouraging her to online date. According to the very humble Ramona, she is in the top 1% and she is too good to man-shop online. The 99% doesn’t have two homes and travel all over the world and have her entree? What does that even mean? Leah and Elyse have another theory on that one!

Ramona claims Mario’s penis shrunk when they tried to have sex since she was so successful he couldn’t handle it. I am sure her personality had nothing to do with that. He certainly didn’t have a hard time getting action elsewhere.

James, the bartender, arrives and boy is he in trouble. Dorinda decides to monopolize all of his time sharing her history. Leah helps the bartender escape from Dorinda. Thank God, he would have had to listen to all of her drunken ramblings and won’t have the benefit of closed captioning. The evening ends on a good note with lots of boob grabbing and drunken make-outs.

Side note: It is interesting that attention has been brought to Andy Cohen and the RHONY drinking to excess. He implies that their behavior is organic but we have to wonder how much of it is producer influenced? It wouldn’t be the first reality show where the alcohol is flowing in all of the episodes.

Next week, Ramona tries to shut it all down when Leah takes it too far and Mario won’t tell her he loves her anymore! See you all then and take care!