Below Deck Mediterranean Recap: Bugsy and Jessica Butt Heads and Charter Guests Throw Some Shade at The Crew, Plus Captain Sandy is on a Power Trip and Threatens to Fire Kiko 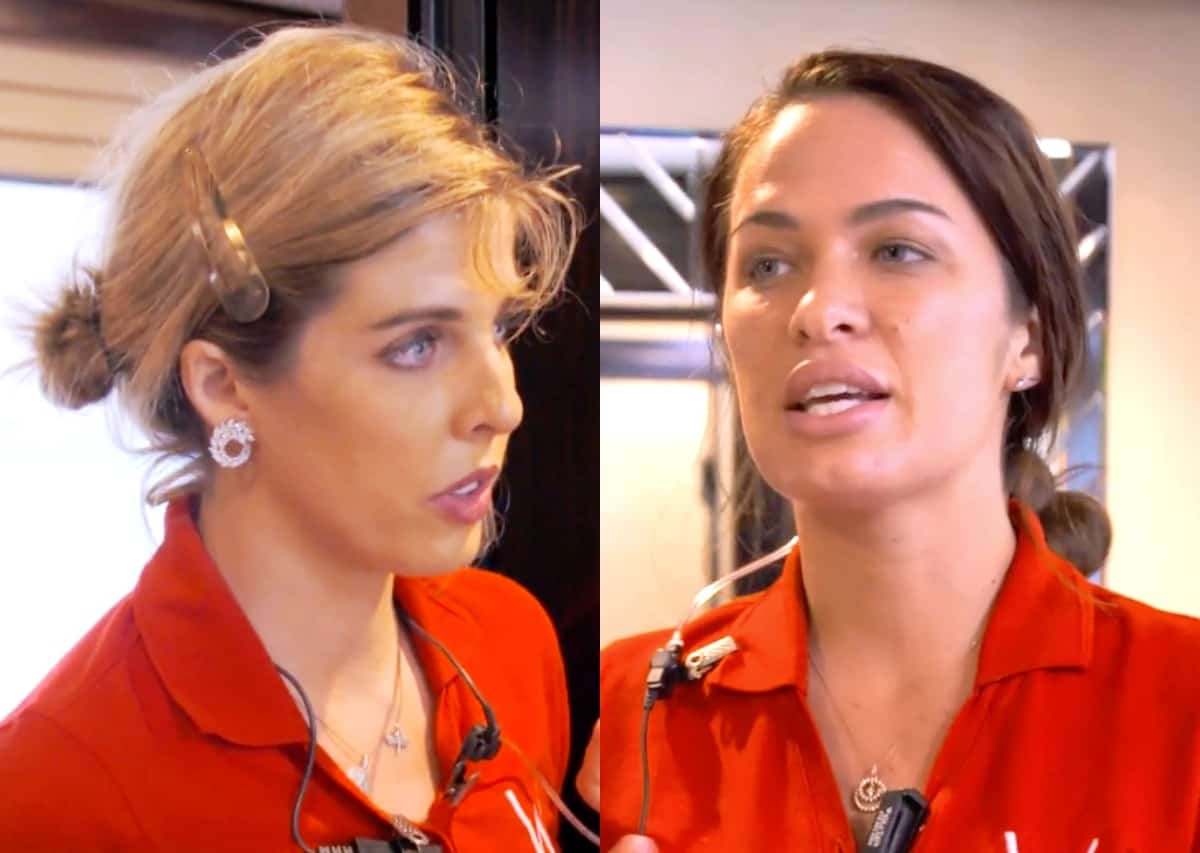 Captain Sandy’s micromanaging and expectations cause tension on this episode of Below Deck Mediterranean.

It’s only the first night of this charter, and the guests are really making Kiko kick himself. They are hungry, ringing bells, and leaving Kiko in a tizzy. In the meantime, Malia has no regrets for demoting Pete. She is trying to teach him a lesson, but who knows which personality Pete will be bringing to the charter on this day.

The next morning, Kiko looks like he is still beating himself up. And there she is… Captain Sandy. Right up in the galley, telling Kiko what he should be doing. According to the captain, Kiko’s food isn’t enough and he needs to be better organized. Blah blah blah. Leave him alone, Captain. How would Captain Sandy like it if someone lurked behind her and told her to actually drive the yacht for once?! No, but seriously. Do yachts have cruise control? Asking for a friend.

Jess is still complaining about her broken finger yet has perfect eyeliner. And Rob and his bum toe? What is with these two? It’s almost as if Rob ripped up his toe just so he could steal away and make out with Jess. He takes his sweet old-time re-bandaging his bleeding toe, sneaks in a few smooches with Jess, and makes Malia p*ssed. She lays into him for dawdling, especially when she asked him to hustle. Rob responds by telling Malia, “You’re holding space for your negative energy.” All Malia wants is a “professional pace,” AKA not a 30-minute face sucking sesh with Jess.

Kiko wants to redeem himself with his sushi lunch, but Bugsy is asking the world of him. I feel like we should all chip in and get Kiko a sous-chef for this charter. Between the demanding guests and Bugsy’s hyper-impatience, he would greatly benefit from an extra set of hands…

Side note: Malia is, like, the worst hype person ever. She attempts to pep talk her deckhands, but they all look less than amped after her little speech.

It appears as though no one runs on Bugsy time. Bugsy is ridiculously high strung and I love when Kiko asks for Hannah. Bugsy acts like she is the chief stew and attempts to control the situation. Little does she know, Jess cannot be controlled because she doesn’t do ANYTHING. Bugsy asks Jess, “Can you not multi-task?” The answer is no. Jess can’t even SINGLE task.

Tensions are high and Jess becomes frustrated because Bugsy actually expects her to work. Jess claims she cannot understand Bugsy’s accent over the radio and things heat up between the girls. Surprise…surprise… Captain Sandy runs to Bugsy’s rescue. To be fair, I can’t understand Bugsy either, but Jess needs to try harder. I think Jess thinks everything should be made easy for her, but guess what, sweetie? That’s not how life goes.

The captain tells Jess, “I think we train our ear and we have to adjust our ear to their communication. We’re gonna figure it out.” I am baffled that Captain Sandy is so understanding of Jess considering she doesn’t bring much to the boat.

Hannah enters her shift and finds herself in the middle of a sh*t storm. Bugsy is annoying Jess. Bugsy is huffy. And Captain Sandy? Well, she is just a sh*t talking monster. She calls Jess the weak link (not a lie) and then bashes Kiko and his disorganization. LEAVE HIM ALONE.

There are hopes of things turning around in time for dinner service. With the mariachi band on board, this is the happiest I have seen the guests. How ’bout Captain Sandy just standing in the galley with her arms folded, eyeing every move of Kiko’s? She is impossible!

One guest refusing to eat anything completely throws Kiko off his game. Maybe he should have just made mushrooms again? He is beyond defeated. As if on cue, Captain Sandy jumps in to talk to the guests and find out how the food has been thus far. When she hears that the food has been “just average,” her head rolls.

I think everyone, crew AND guests, need to just slow their roll. Everything is unraveling. I mean, why is Hannah doing laundry service and Bugsy is out on the deck schmoozing with the guests? It’s as if Hannah has just legit checked out, amiright? Also, what are these pills Hannah is forever popping into her mouth every night?

At 9:00 a.m., breakfast is supposed to be served. The guests find themselves at the table, but there is no service to be had. At 9:25, the captain does what she does best and lurks. She is a pretty sh*tty leader cuz she continuously turns on her own team! She throws the stews under the bus and I just love how she goes and wakes her beloved Bugsy up to save the breakfast service. Also, I am pretty sure that these guests are complaining solely because they plan on leaving a lousy tip and want it to be justifiable.

The breakfast service is a sh*tshow. Kiko is trying to keep up, Bugsy is trying to save face, and it’s almost as if Hannah and Jess have taken some sort of relaxant. There is no hustle behind their movement. It is wild!

It is so evident that Captain Sandy is team Malia and Bugsy. She makes no qualms about her issues with Hannah, Kiko, Pete…hell the whole rest of the crew…but she kisses Malia and Bugsy’s butts.

When the guests depart, you can tell that everyone is holding their breath when the primary begins his speech. He explains that some of his friends were not crazy about the food and the service was a bit shoddy…but BUGSY. Man, Bugsy was incredible. Ouch. Poor Hannah.

Once the guests are off, it’s time to get down to business. Why is Jess taking a break with Rob when she should be doing Captain Sandy’s laundry? Perhaps THAT would explain why Hannah asked if she was giving 100%. I can’t with this girl.

During the tip meeting, Captain Sandy states that she is tired of having the same conversations about her expectations. She threatens the crew and explains that if things don’t change, there will be changes with the crew. Hold up: Maybe Captain Sandy better change *her* attitude. It’s impossible to feel inspired by her, and if she is always hovering, how can anyone perform work in the best way possible? She ends her pep talk bashing by saying, “Let’s finish together.” Talk about a threat.

Once the tips have been distributed (and I am quite shocked that the tip was relatively hefty), Captain Sandy asks to speak with Hannah. She sits her down and explains, “I feel like you sort of resigned since Bugsy came on.” Hannah swears that she is just tired, but the reality is, she has def given up. We can all tell and can you blame her? Bugsy walks on water according to the captain, and to be fair, it is hard to stomach. Captain Sandy feels the needs to make sure Hannah knows that she is supported (bahaha), but let’s be real, the captain would choose Bugsy over Hannah any day of the week.

When the captain calls Kiko to the bridge, I get so nervous! Captain Sandy is really just laying into these guys, huh? She starts off with some bullsh*t about how great Kiko is as a person, but then states, “I need the food. I’m worried. I have a reputation, I don’t wanna ruin it.” Hold up: When did this become the Captain Sandy show?! She tells Kiko that if he doesn’t shape up, she will ship him out. Say it ain’t so!