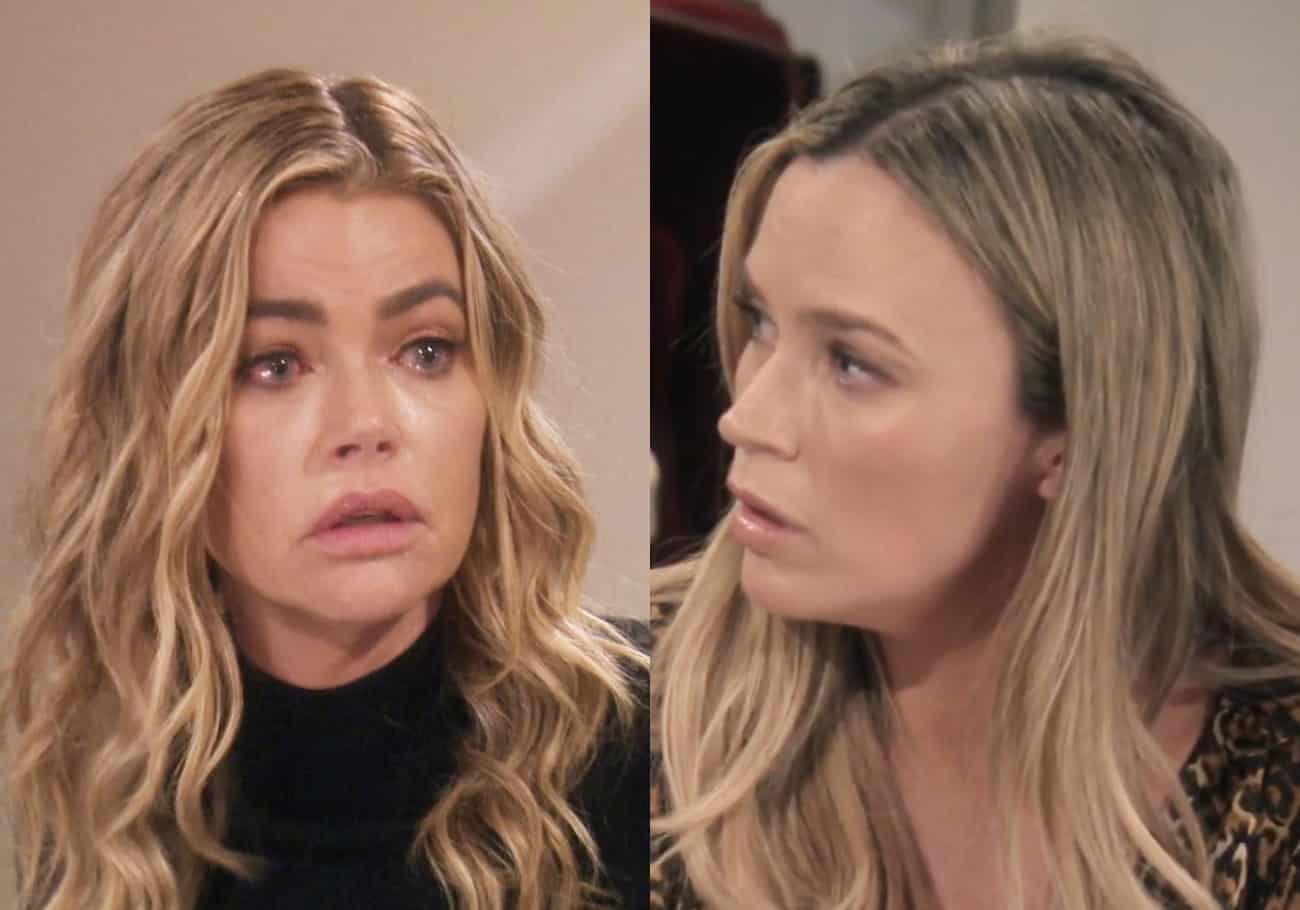 This isn’t your average “annual girls’ trip” on this episode of the Real Housewives of Beverly Hills.

Ah, Rome. The best place to begin a sh*t stirring fest, according to Teddi. In the cab over to the hotel, Teddi spills the news about the Denise/ Brandi sex scandal to Rinna. Anyone else hate how Teddi nurses her gossip and slowllllly lets it out? Kyle stays mum because you know her, she hates to get involved. LOL.

It’s wild to see the juxtaposition of the cab rides. In the other cab, you’ve got Erika and Dorit discussing shopping plans and the beauty of Italy. Now THAT sounds like appropriate chatter. Meanwhile, in cab mean-girls, Kyle laments, “What are we going to do?” about the Denise information. Well, Kyle. You pretend like you didn’t hear it. Because you are in Rome. And the last thing you should be doing is ruffling feathers on a VACATION, amiright?

Seems like everyone, except Erika, is pleased with their rooms. Shocking, actually, that not more of the ladies throw a fit being that is commonplace in Housewife history. Upon settling into her room, Rinna claims her “stomach is in knots” about the Denise situation. I am calling bullsh*t on that. If she was such a good friend to Denise, she should have warned her about the impending fight Denise is about to walk into upon her arrival.

Question: How many sequined articles of clothing can Kyle own? Answer: too many. The outfits on these women are incredible. They have their glam squads with them and Dorit literally glued pearls to her baby hair because, ya know, she is just a “Fashion Girl” living her best life.

Apparently, Teddi is really into cornering people in cabs on this trip. On the way to drinks, she tells Rinna, “I had anxiety about even sharing it, but you’re damned if you do and you’re damned if you don’t.” Um, incorrect, Teddi. Just because you heard something about Denise doesn’t mean that you need to insert yourself into some gossip that doesn’t involve you in any way, shape, or form. Teddi could have told Denise what was said about her and shut it down, but instead, she ran with the information and spread it around. Teddi’s claim that she told Rinna because she is “friends” with Denise is laughable. Teddi made a calculated move by leaking the Brandi tale.

Dorit, Erika, Kyle, Teddi, and Rinna sit down for some bites and drinks. Notice how Rinna makes a disclaimer after slugging back her drink that she is not responsible for anything that comes out of her mouth now. Hint, hint. When Denise and Garcelle call to let the ladies know that they have landed in Rome, but have decided to hang in for the night, Teddi looks like a kid in a candy shop. You know damn well she is DYING to tell the others about Denise’s sexual escapade.

Lemme ask this: Why all of the games? This “go around the table to ask questions” game gets the women nowhere. It is also so painfully forced. Hearing about Kyle’s first-time sex story only makes me feel like she is desperately trying to figure out a way to work Denise into the conversation. Luckily, before anyone else can share any more cringe-worthy memories, SURPRISE: Garcelle and Denise show up to the restaurant. Everyone is pumped to see them…everyone except Teddi.

Denise is the only one who looks like she was on an airplane to Italy. Garcelle looks like a million bucks and she jumps right into her love triangle issues with her current boyfriend and her ex-husband. The conversation is light and fun, and for a minute, we forget “judgey wudgey was a pregnant woman” is even there. I think I even saw Teddi laugh. Guess the rumor isn’t weighing THAT heavily on her, huh?

The next morning, Rinna calls Garcelle to discuss “wardrobe.” What is happening? The lewks these ladies give! Good thing Erika can be mobile in her hat. She looks like she is a mummy! Could these women stick out any more during their Roman sightseeing? Get a load of these ensembles. And to see Denise in her biker gear walking in line with Rinna and her leopard print fedora and Erika and her full body cast…omg.

Sutton finally made it to Rome after much ado. She was able to get her passport so she could fly commercial. What is her life?! Why wouldn’t she just fly private? If you can, then why the hell not?! I mean, these women drop $3,000-$8,000 in Fendi for crying out loud. Commercial planes, pssht!

As the day turns into night, the ladies prepare for dinner. Isn’t it curious that Kim calls Kyle, almost as a reminder of the Brandi story? And…wait a minute. Erika is SHARING Mikey, her creative director, with Rinna?! I thought Mikey would know better than to let Rinna prance around with that wig on her head!

Ok ya’ll. Hold onto your hats. It’s time for *THE* dinner, and as the women make their grand entrance into the HOTEL RESTAURANT, it’s like a ridiculous catwalk. Dorit seriously thinks she is an Italian model and the only funny thing Kyle said in this episode is that when Dorit returns to the states, she will have a new accent to add to her repertoire.

After Sutton sends back her wine and Garcelle teases her for doing so, Sutton lets Garcelle know, “I was a little put off when you asked me when I got my money” the other night at their dinner. And so begins the entrance to drama-ville. When Garcelle apologizes, she then asks, “So have we gotten all our issues out?” Ha — not even CLOSE, Garcelle!

Anddd action. Teddi blurts out that someone told her that Denise has said terrible things about her. Teddi, let’s be real. All of the women say awful things about each other behind their backs. Get over it. You signed up for the RHOBH. Of course Denise denies these statements and Teddi questions if Denise has shared these things with Brandi Glanville. Denise states that she “hardly talks” to Brandi.

Sidenote: Some friend you are, Rinna. Sitting there with your eyes diverted. Denise adamantly says that she has not said anything negative about any of the women. Dorit is more confused than usual and demands to know what Teddi is holding back from the group. Teddi rolls her eyes and tells Denise, “I don’t know why she [Brandi] would be making up stories.” Why do they all suddenly find it hard to believe that Brandi is lying? Just last season they were bashing her “truths” left and right!

Denise, unwilling to take much more, says to Teddi, “If this is a dangerous area, then not on camera.” Eh — a little late for that. Too bad it’s already on camera, Denise. You can thank Brandi for that one. Watching Teddi torture Denise is absolutely painful. Finally, Teddi blurts it out after repeating that it’s reallllly bad. “She said you two had sex.” The faces on the ladies who didn’t know about this are priceless. Dorit, in particular.

“I didn’t think it was my place to say it” is the most a*s-backwards thing for Teddi of all people to say considering she was the one who brought this scandal to the surface! Way to go, Garcelle, for saying what everyone else is thinking. It IS Denise’s business….but we DO want to get to the bottom of it.

The women are catching onto Denise always asking the cameras to stop filming whenever she feels threatened, uncomfortable, and no longer wants to discuss a particular subject. When Denise throws up her hands and states, “Bravo, Bravo, Bravo. Please do not air this, please. That is not true,” Sutton drops it on the ladies.

Sutton apologizes for being the new girl, but at least she is a true lady. It turns out she KNEW this rumor about Brandi and Denise for a while and has not spilled. She certainly confused this group by actually keeping her mouth shut, huh?

Naturally, Teddi makes this about her. Her anxiety and worrying about getting this information off her chest. How about what getting this information off YOUR chest would do to DENISE?! Zero f*cks…Maybe Teddi should care more about what was being said about her than what was being said about Denise. Bravo, Bravo, Bravo, Sutton. Things end awkwardly, as only a dinner like this can, but this is far from over…in fact, it’s only just begun.