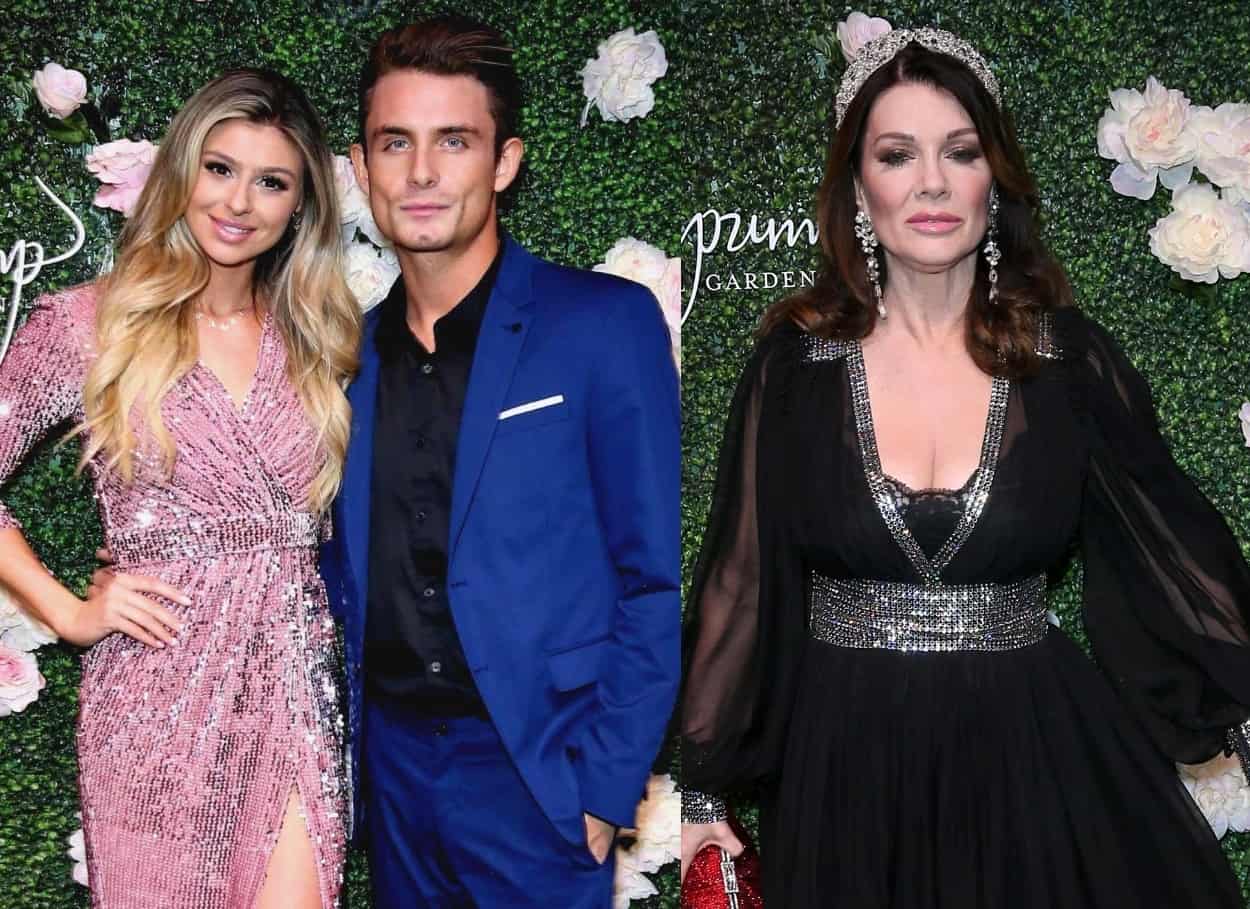 James Kennedy and his girlfriend, Raquel Leviss, are speaking out in defense of their boss and Vanderpump Rules co-star, Lisa Vanderpump.

Days after a former employee of SUR Restaurant filed a class action lawsuit against Lisa and her husband, Ken Todd, claiming they were underpaid and forced to work without proper breaks, the couple shared their own experiences at SUR as Danica Dow and Peter Madrigal also weighed in and Lisa reacted with a series of thankful tweets.

“I’ve always taken a break when I wanted and have always gotten paid the correct amount. Even looking back since I was a bus boy it was legit and fair. Been at at sur for years now,” James wrote on August 6.

“This is so ridiculous… Since working as a waitress at SUR for two years have always taken a break when I’ve wanted one and always gotten paid fairly. It has never been an issue. This lawsuit just doesn’t seem right to me,” Raquel stated.

While one person suggested that Raquel may be treated better than other SUR employees due to the fact that she is a Pump Rules cast member, the pageant queen shut down the idea.

“It might seem like I would be treated differently but I PROMISE you that is not the case. When clocking in for work my co-workers and managers treated me the same as any employee and I received the same hourly rate. The only special treatment I got was from the tables I waited on,” she explained. 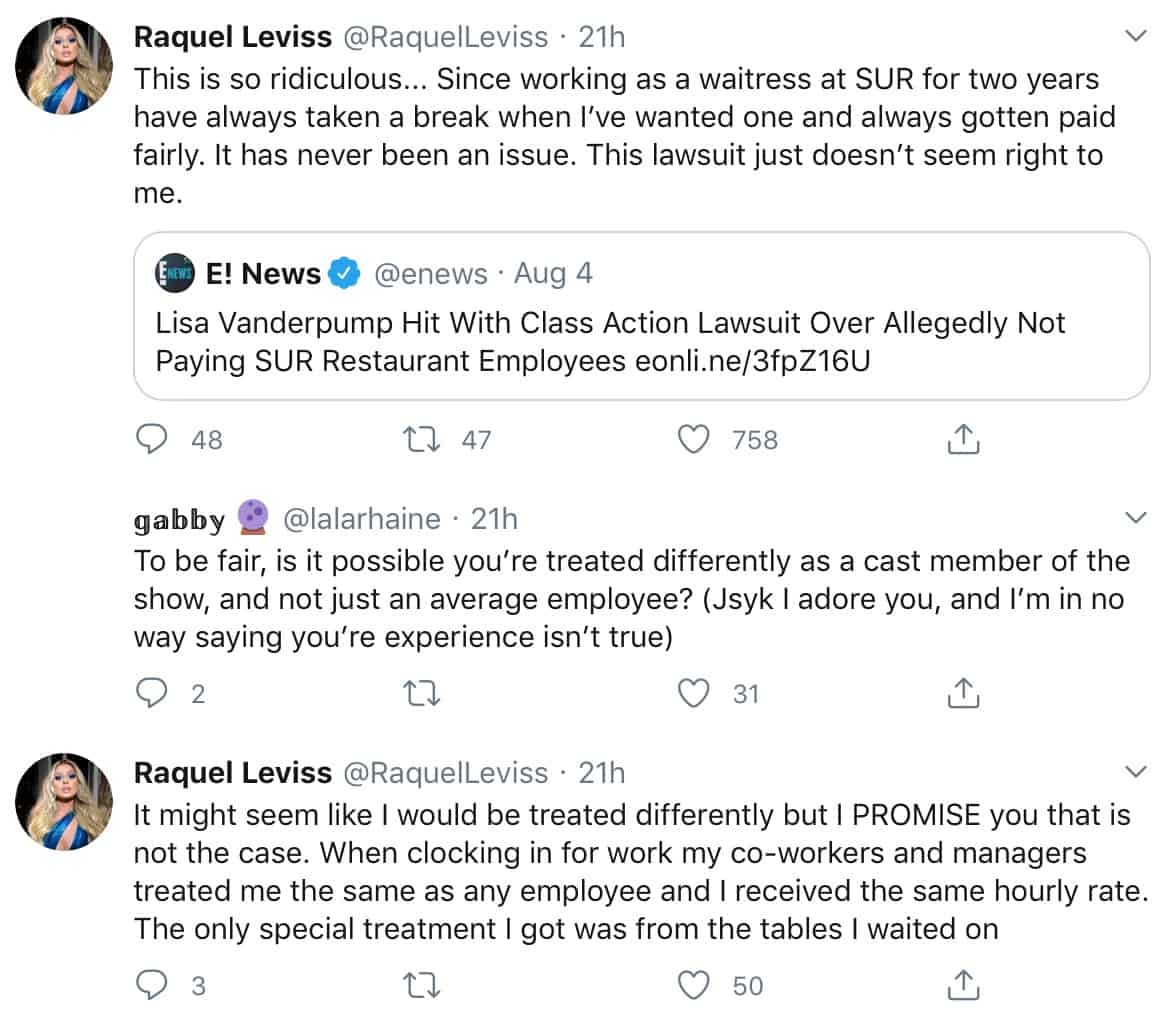 Danica also denied that Lisa has failed to pay her SUR employees.

“This isn’t true. I’ve never personally been, or even heard of, anybody not being paid,” she tweeted.

Then, after a fan asked how much Lisa was paying her to share the information, Danica said she’s simply standing up for what’s right.

“I wish she was paying me cuz I’m broke but nah that’s not the case lol,” Danica replied. “Just standing up for my boss because it’s bullsh*t.” 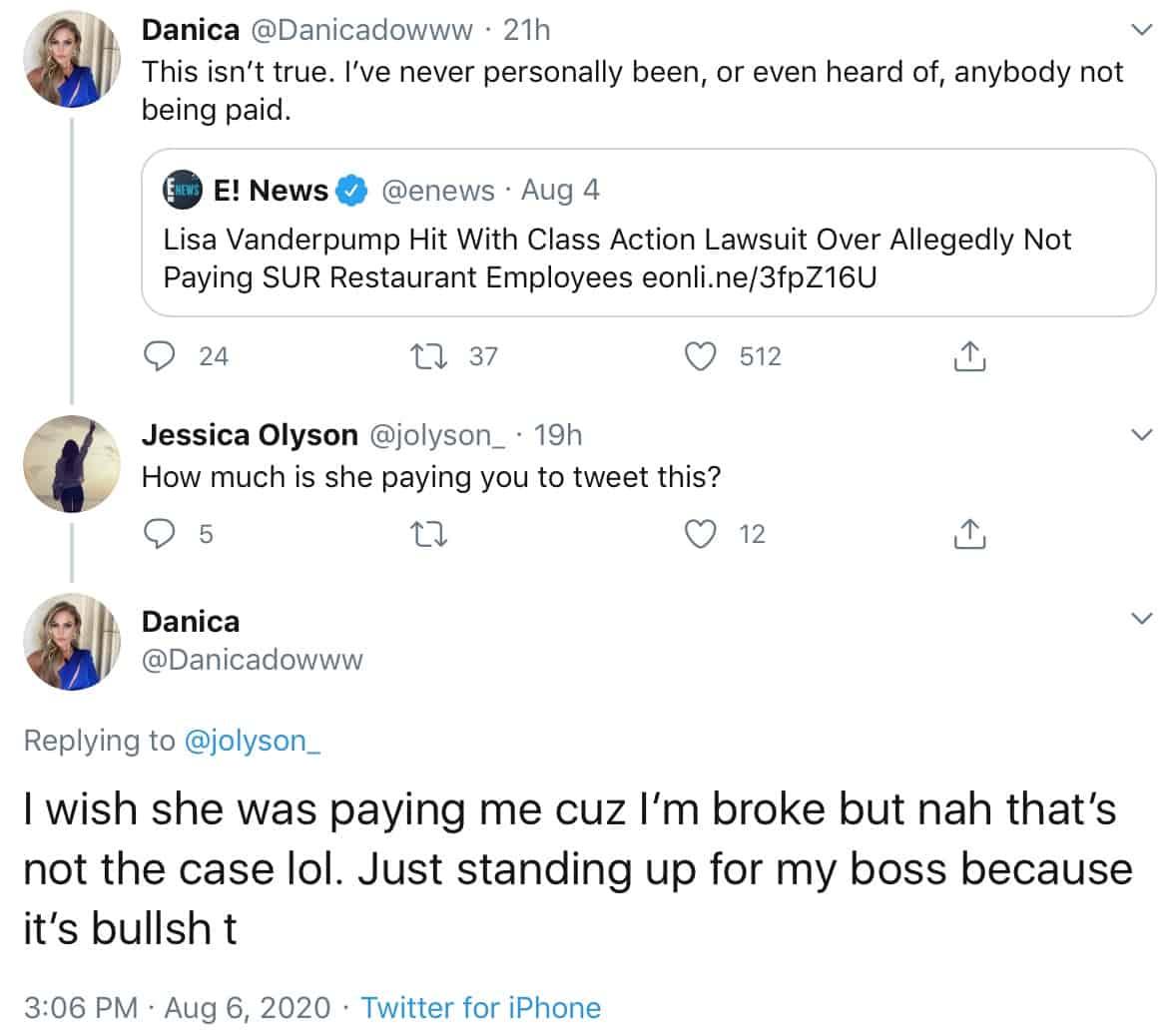 “I miss my second home, which I’ve been at for 12 years! Hard to believe it’s been that long! Never seen something like this. Truly miss everyone,” Peter shared.

I miss my second home, which I’ve been at for 12 years! Hard to believe it’s been that long! Never seen something like this. Truly miss everyone. https://t.co/gv3bxltVhr

Following the Pump Rules stars’ posts, Lisa responded with thanks.

“I see you! Stay strong darling we will get back on track soon,I miss all of you sooo much,” she added to Danica.

Following the filing of the lawsuit, SUR Restaurant’s lawyers offered a statement to Page Six.

“SUR denies the allegations in the lawsuit brought by our former employee, Olivia Hanson,” their statement read. “The company takes employee compensation very seriously and has extensive policies and procedures in place to comply with the wage laws. We care deeply for our employees and are committed to providing them with fair and competitive compensation that is fully compliant with the law.”

“During this difficult and challenging time, we will continue to strive to responsibly and safely reopen our restaurant in order to return our valued employees back to work,” the attorneys added.