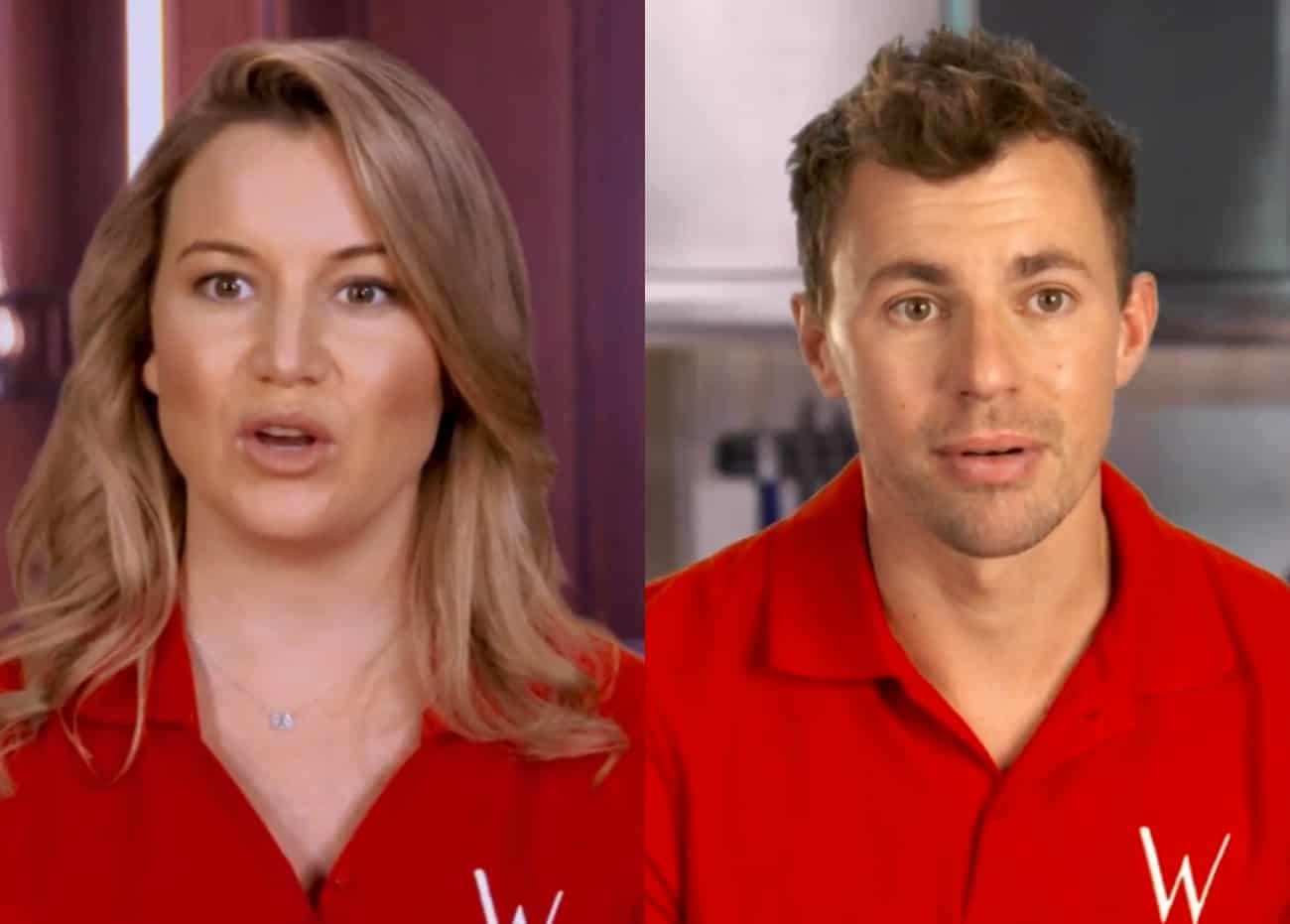 Brace yourselves. Captain Sandy’s power trip has reached an all-time high and maritime law changes the future for Hannah on this episode of Below Deck Mediterranean.

Hannah looks like a deer in headlights when Captain “I-want-to-see-you-fail” Sandy asks her to take a seat in her office. Upon hearing that she has *drugs* on board, Hannah looks dumbfounded and then straight up p*ssed. Captain Sandy lets Hannah know, “This is very serious. I have to do a disciplinary action.”

Hannah is clearly in shock. She def should have let the captain know she was carrying her prescription on board, but come on. Hannah has anxiety and the captain knows this FROM YEARS OF WORKING TOGETHER. Okay, so maybe Hannah lied and said she didn’t take any Valium since she has been on board, BUT STILL. This is a straight ambush. Captain Sandy looks like she is enjoying watching Hannah squirm and sends Hannah, the drug offender, to her cabin to get the goods.

About a minute after Hannah left to grab her drugs and paraphernalia, the captain has a moment of panic: “Should I be in the cabin with her? Do you think she’s flushing everything?” Captain Sandy proceeds to barge into Hannah’s cabin and fling open the bathroom door, which Hannah is behind. I have to admit, it is certainly an odd time for Hannah to be in the bathroom WITH her drugs, but alas, ya gotta go when ya gotta go, amiright?

Please note that this is all happening THREE HOURS before charter. Does anyone else wanna punch Malia‘s boyfriend Tom, aka the new chef, in the nose? I mean, he’s all smiles and excited about his first charter whilst all of this Hannah drama is unfolding. You KNOW he KNOWS what is going on…he sleeps with the enemy, for crying out loud!

The captain claims she has “utmost compassion” for Hannah, but she fires Hannah because Hannah is just too risky and a liability. Hannah has too much going on, according to Captain Sandy, and really, there isn’t any more room for Hannah to get in on the a*s kissing that Bugsy and Malia do so well.

Hannah yawns as Captain Sandy dismisses her (best FU ever) and she blows past Tom, who pretends to cheerily greet her. He is 100% in cahoots with team Malia/Sandy/Bugsy. Captain Sandy stands by her decision as per maritime law and defends her choice to fire Hannah.

Hannah behaves surprisingly rather maturely. She asks for her luggage and jumps ship to call her boyfriend. When Captain Sandy sees Hannah off the yacht, she does what Captain Sandy does best — she looks for the cameras and gets back in Hannah’s face. WHY? Like, leave her alone. The captain knows Hannah has anxiety and continues to pretend she cares about Hannah. It. Is. Laughable. Borderline offensive! What a crock. If she cared, she would have figured out a better way to go about this incident with Hannah. Captain Sandy blows up on Hannah and states, “now officially I don’t care,” and she gets really tough on Hannah. Notice how this change of heart happens juuuust as the captain is stepping back onto the boat. Perfectly timed to demonstrate authority, if you ask me.

Way to go, Malia. I hope you feel great about yourself. During the secret chat Malia has with the captain after Hannah’s firing, Malia states, Hannah “can’t be taking stuff.” She nods in agreement with ANYTHING Captain Sandy says. Malia is such a brown noser and is Captain Sandy’s right-hand woman. It is painful to watch.

Half of the crew is actually in on Hannah’s firing and the rest of them have no idea what is going on. Jessica is shocked as Hannah tells her the deal. Hannah explains yachting is a dog eat dog gig and that she has a suspicion that Malia went in her bag to snap the evidence photo. Good. I am glad she had a hunch Malia was the snake.

Malia deserves an award for her two-faced behavior this season. As Hannah haphazardly packs her belongings, Malia finds herself in the midst of the drama. What else is new? I am surprised Hannah didn’t deck Malia, especially when Malia asks if the drugs were registered with the boat. Listen, drugs are drugs, but there is a right way to go about this and Malia certainly took the low road.

Hannah admits she should have reported it all, and although she has been pretty over this charter season, she would have “preferred to end on a high. Not literally.” God, I love her. Even keeping her snarky humor on the darkest of her days. Hannah, you will be missed.

It’s the moment Bugsy has been waiting for her entire life. Captain Sandy awards her the chief stew title and Bugsy straight up lights up like a Christmas tree. What a promotion and what sh*tty circumstances! Now Malia truly has what she wants. Her boyfriend is the chef and her bestie is the chief stew. It’s pathetic the way Malia had her hand in it all to have it all fall into place.

I love how Tom thinks Hannah simply walked out the day of the charter. Don’t act like you didn’t egg Malia on to send that text to Captain Sandy. Malia needs to back off. It’s over. Hannah is gone, Malia. Enough talking about it to Captain Sandy and who the hell made you the maritime police?

The next charter is rapidly approaching and Captain Sandy pulls the crew together to fill them in on Hannah’s firing. She does a FINE job of making Hannah look like a druggie and slips in that Bugsy is the new chief stew. Shudder. I can’t wait to watch this yacht go down in flames. A new chef, a new chief stew, and a stewardess down — what could possibly go wrong?!

Bugsy jumps right into her new role and greets the new guests for the start of the charter. The guests appear to have packed their entire lives. They crack cheesy jokes and are an interesting bunch…that’s putting it nicely. They are def going to give the crew a run for their money. Side note: I hope none of the guests refer to Bugsy as “chief” per her suggestion. Power trip much, Bugsy? Gag.

Hold up — I never saw Malia so involved in the kitchen in my entire life. She is dead set on helping her boo be successful. She is plating and washing dishes and it’s hilarious how hard she is favoring her boyfriend, Tom. Perhaps someone should report Malia for neglecting the deck since she is spending all of her time down in the galley. Interesting how everyone gave Kiko crap about not needing a sous, but apparently, Malia has taken on the role of Tom’s sous chef…

Damn. Meal number one and the guests like Chef Tom. I was kinda hoping that he was going to crash and burn because nothing makes me angrier than watching Captain Sandy applaud anyone that is attached to Malia.

Bugsy brings some news to Tom: the guests are requesting a birthday cake and there’s barely any time to prep for this new addition to the menu. Watching Tom b*tch about the last-minute birthday cake is so annoying. He better be careful running to tell Malia he is angry — she may out his issues with the captain, since you know, she has a tendency to do that. Buuuurn. Perhaps he should stop wasting time complaining and get to making that cake? Quit whining, Tom. The last chef made 72 plates and did it beautifully. Tom can’t even open up oysters. Bring back Kiko. Sigh.

Malia is allll up in that galley doing everything she can to help Tom put out a delish meal. Captain Sandy is going to act like Malia stepped up as a team player because she flipped the steaks on the grill and ran plates. The reality is, if this was Kiko in the kitchen, Captain Sandy would have ripped him a new one. How dare Kiko ask for extra hands! But Tom…MALIA’S Tom? Yeah, he can do whatever he wants.

Except it turns out that apparently Tom isn’t *that* classically trained, huh? The guests have shells galore in their oysters. Malia totally wants to kill Tom, especially because she sang his praises and essentially got him the job.

Question: Does Tom do anything on his own? Answer: NO. And what Tom DOES do, he doesn’t do well. He actually has a meltdown and claims he has “way too much self-respect” to carry on. You know what they say, Tom. If you can’t take the heat, then get out of the kitchen. Will Captain Sandy have to make a call for a new chef, too? Man…karma is a b*tch, huh?