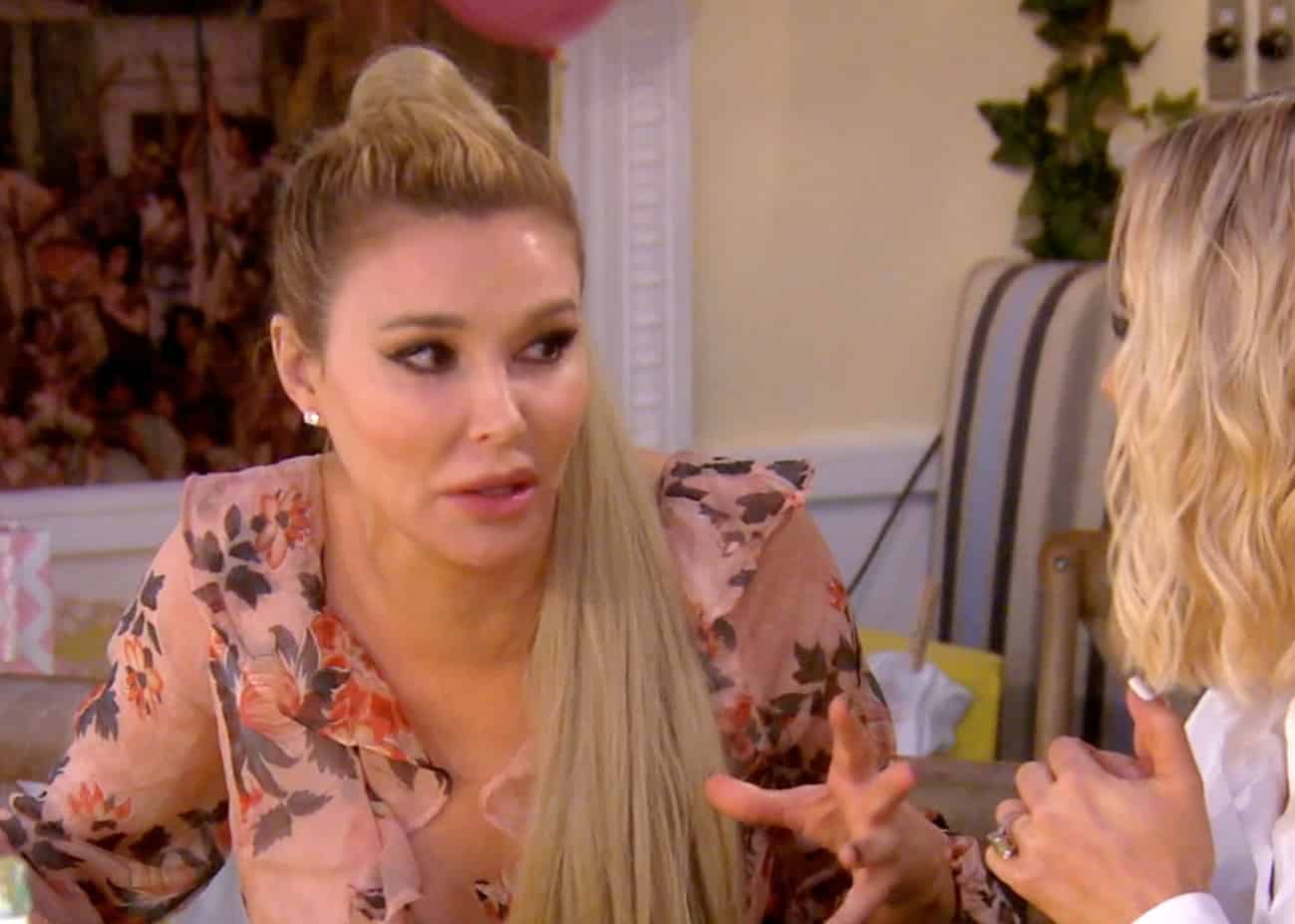 The ladies are back stateside, but the drama seems to have followed them from Rome. On this episode of the Real Housewives of Beverly Hills, Brandi is back to have her voice heard and to set the record straight.

Denise pays a visit to Garcelle‘s new place. They toast to surviving Rome and they toast to being real friends. Lord knows that Rinna stabbed Denise in the back…multiple times. Denise is lucky to have at least one true pal by her side. Denise shares that Aaron now knows the skinny about Brandi and Denise and we can all bet that he will have something to say to the ladies when he sees them next. Yikes.

Garcelle explains that things are a little different between her and Rinna since Rome. She is over Rinna’s “own it” phrase and can’t get over how fierce Denise was on the last night in Rome. Denise reminds Garcelle she has dealt with lots of turmoil and she isn’t gonna let a nasty rumor get her down.

Because Kyle and Dorit are clearly fighting to be the better friend to Teddi, they have BOTH decided to host Teddi’s baby shower at…Buca di Beppo. #convenient. Dorit is only doing this out of the goodness of her heart, I mean, to show off the Capri room she designed by throwing a million lemons in a vase. Anyone else unimpressed by the yellow tablecloths and cheesy paintings?

No one knows if Denise is actually going to come to Teddi’s baby shower. But we DO know that Kim and Brandi are coming cuz what’s a baby shower without drama? Talk about a total set-up, Kyle! Those two are only invited because Kyle totally knows Brandi will spill in front of all the women. She is salivating at the thought! Man, I don’t blame Denise AT ALL if she chooses to bow out of this event.

Meanwhile at Rinna’s house, she is busy chatting with her daughter, Amelia, about her upcoming move and her most recent therapy session. Amelia shares that she is now on some anti-depressants and that next month marks a year since she has recovered from her eating disorder. Rinna shares Garcelle’s comment, the one where Garcelle suggested Amelia has an eating disorder because of Rinna’s lingerie-dancing posts.

To that, Amelia retorts, “I would tell her as nicely as possible with all due respect, f*ck off.” Super nice, Amelia, although it sounds as if you ARE mad that your mom is “small.” Rinna seems more thrilled that she can now keep dancing on Instagram since it didn’t trigger her daughter. Sigh.

More and more guests begin arriving at Teddi’s baby shower. Kim, Rinna, and her bizarro ponytail make their way in. LOL at Rinna bringing a bunny. Kim laughs it off and we learn that the women have patched up their relationship cuz they may become related through marriage one day. WHAT. Yep. Amelia is dating the little brother of Kim’s daughter’s husband. Follow that?

In the midst of the party guests arriving, Denise FaceTimes Dorit. Hmmm…Denise is “sick” and won’t be able to make the baby shower. I was half hoping that she would come up with a better excuse, but I am damn sure she is SICK of everyone at that party and I know exactly why she won’t be in attendance.

When Kyle arrives at Buca with Teddi, the surprise is a big hit. Dorit has another surprise for all of the guests…the CAPRI ROOM! Too bad no one is as shocked by the décor. As everyone finds their seats (yay place cards!), why was it necessary for Dorit to make a big thing about Denise not coming to the shower in front of all the women? Talk about foreshadowing…

Holy hell…Erika Jayne’s hair. We get it, Erika — Teddi is having a girl, BUT a pink bird’s nest, I mean wig, is even worse than Rinna’s ponytail! This shower is Erika’s last hurrah, as she is on her way to Broadway. Someone stick a sock in Rinna’s mouth PUH-LEASE. Rinna *always* has to make everything about her. We allllll know that you played the role of Roxie, too, Rinna, but let Erika get the spotlight for the time being. Thank goodness for Garcelle. Preach, girl. She lets Rinna know that she is self-centered and leaves Rinna speechless for a hot minute. Member when the women always gave Garcelle a hard time for never being around? Bet they sure wish she was still MIA now…

Rinna claims that she has not tried to take Erika’s thunder, but let’s be real. Garcelle says that Rinna does, in fact, support her friends; however, she has a way of being a spotlight hog. Speaking of stealing the spotlight, Kim blurts out, “Brandi just texted me and she said she was invited and she is in the neighborhood. Should I tell her to come by?” How convenient. Especially convenient now that Garcelle and Sutton (#teamDenise) leave the party.

When Erika chooses to address the elephant in the room, the topic of the baby shower switches to Denise, of course. Kyle begins praising Brandi and continues to swear, “I have never known her to be a liar.” Well, Brandi, that’s a heck of an outfit to just be driving around the neighborhood in, huh? And to be mic’d? It’s all so curious, Brandi. Hold up, Kyle kissing Brandi’s a*s by calling her an amazing mom is laughable. Dorit straight asks Brandi if honesty is important, and Brandi claims that 99% of the time she is a straight shooter. Suuuure.

Kyle can’t WAIT to tell Brandi that sh*t got real in Rome. Kudos to Rinna for saying she is uncomfortable talking about this topic without Denise present. Seems like Dorit is in Denise’s corner too. As the subject gets deeper and deeper, Teddi’s “real friends” look more and more lost.

Teddi then chooses to dismiss her friends from her baby shower — basically kicks them out — so they can talk about the Denise/Brandi issues. WTF. What kind of person does that and how awkward did things just get? This is the worst baby shower… No bingo? No opening presents? Teddi is clearly too excited to continue opening her mouth about Denise’s sexcapades to care. I love how Brandi doesn’t wanna talk about sex in front of “strangers,” aka Teddi’s friends, but she sings like a canary for national television once they leave.

WHO CARES IF BRANDI AND DENISE HOOKED UP?! Really. Dorit and Erika (who BTW doesn’t open her mouth when she talks now?) keep reminding Brandi that Denise called HER a liar. Brandi goes back into the whole “oh-no-now-I’m-the-cheater” story and ends with her claim that Denise said, “Aaron can never know this, he will kill me.” Brandi feels like she is the cheater in this situation because she *thought* Denise and Aaron had an open relationship. Look at Teddi holding court and trying to remind the women that Denise is wrong in this situation. It’s like she made notecards at home with bullet points and is on the debate team!

Dorit is still not believing Brandi and I am here for it. She keeps shutting Brandi down, and when Brandi brings out the receipts, Dorit is still not buying it. The phone gets passed around and Brandi goes as far as saying that Denise is a master manipulator, even more than “LVP.” The women can’t understand why Denise would lie about even having a friendship with Brandi when these texts that Brandi is showing tell a much different tale. This of course leaves the ladies worrying, what else is Denise lying about?

Hold up, Rinna. What exactly does the Brandi/Denise scandal have to do with all of you? So much for not being involved and trying to be a better friend to Denise, huh, Rinna? And to think…they are at a baby shower!

The next morning, Erika is heading out for Broadway. Her husband essentially high-fives her and sends her off on the private plane going to NYC. Erika is living her fairytale, all right…

Rinna goes over to Kyle’s house to do what they do best: talk sh*t about Denise and Brandi. Rinna claims she is confused by the whole mess, but she suddenly feels like she has been lied to by Denise. Kyle and her fly-girl hat look at Rinna with wide-eyes and shock, as if she didn’t see this coming. Also, Kyle, you don’t feel THAT bad about the fact that Denise has to deal with cleaning up this whole Brandi mess. YOU helped get the information out there!

Rinna needs to take her conspiracy theories and take a long walk off a short pier. I doubt that Denise is using your “friendship” as a “weapon.” I also doubt that Denise cares that much about this ridiculousness. She will get the last laugh for sure. Rinna, you are not the victim.