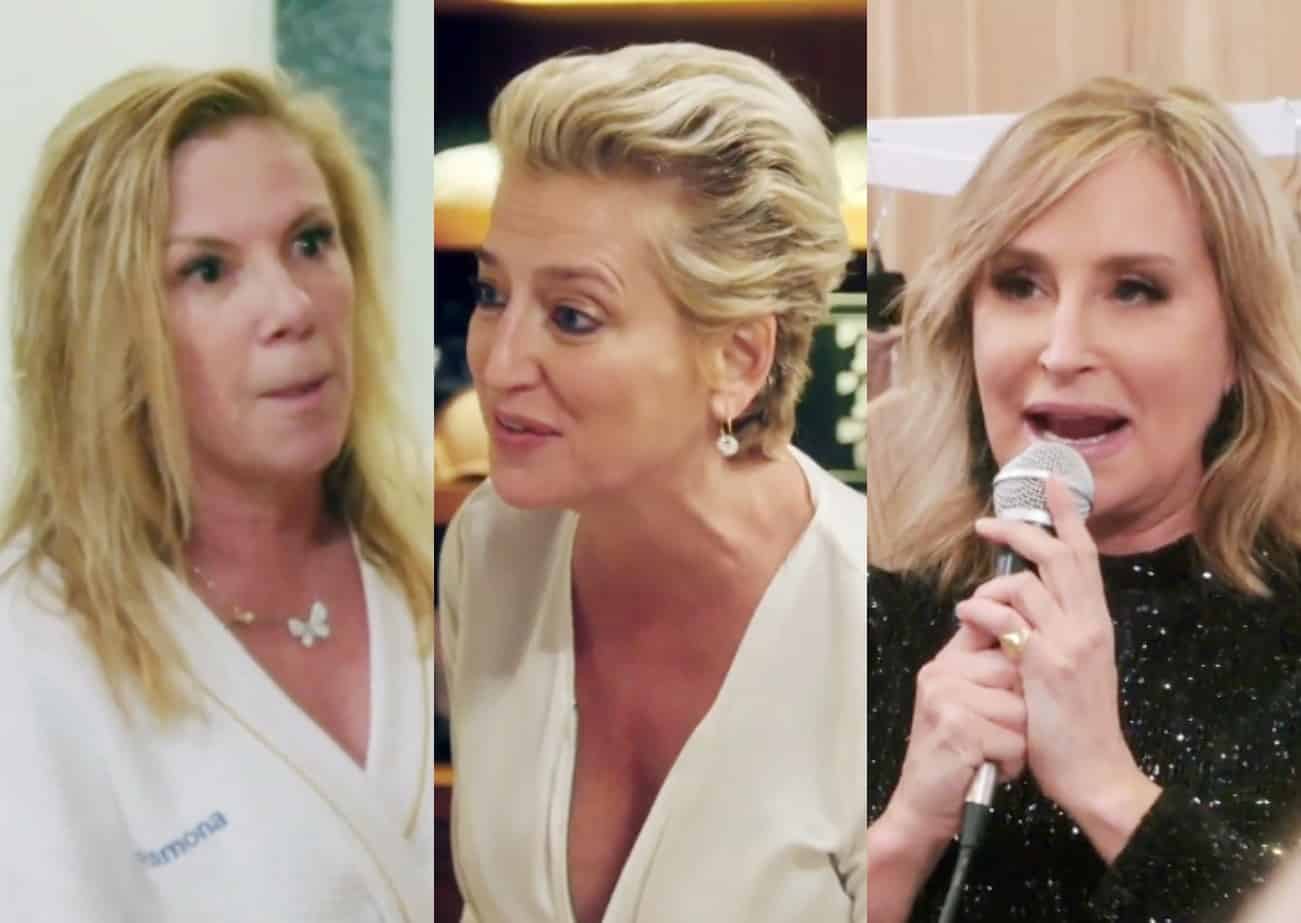 This week on the Real Housewives of New York City, the episode resumes in Mexico and there is STILL friction on the housewives front! How will they address the anger elephant in the room? Let’s watch this anger train go off the track, shall we?

We begin on the last night in Mexico and the ladies are getting ready for dinner. On a side note: Doesn’t it seem like this trip was covered in more episodes than other housewives trips? Sorry, I digress…

Ramona is Googling “anger issues” and decided to text the group, including Dorinda. Luann thinks Dorinda is going to blow a gasket over this text. Dorinda is already firing shots back at Ramona, deflecting already. Luann thinks this was done in a very shady way and isn’t going to accomplish anything but setting her off. Me too.

Dorinda glides casually into Ramona and Sonja’s room acting all nonchalant. She just loves the great articles and has some to share too. In her ITM she says, “Rats only come out at night and Ramona is a coward.” She has articles to share too on Ms. Singer! Dorinda doesn’t appreciate Ramona’s help and they go at it. Yikes, she even tells her to act like an educated woman.

Ramona wants to keep using her Ramona dictionary when she mispronounces deflect. Dorinda said the word to describe Ramona is “traumatized” since that is how people feel when they meet her. BOOM, she goes low, already calling her uneducated and intolerable. Dorinda isn’t regretting her actions and mocks Ramona with “Do your turtle tears!” Dorinda thinks Ramona is jealous of her and that is why she is picking on her. Ramona thinks Dorinda behaves like her abusive dad did. #TRUTH

Sonja refused to stop the Dorinda anger train and probably could have used a cool drink and some popcorn to snack on during this side-show. Ramona got so worked up she pooped in her robe. Wow, there has been a lot of incontinence on this trip!

Luann is carrying a giant Popsicle raft to chat with Dorinda by the pool about the text. Maybe the raft is symbolic for an olive branch? She begs her to just listen. Dorinda refuses to accept responsibility and listen to this “bash Dorinda monologue,” and she won’t take advice from Lu. I am sorry, this is the worst type of friend: the kind who throws your past in your face when they are confronted on anything. Dorinda thinks Lu lives in the past? Are you freaking kidding me? She is in la-la land. Leah joins them, thank god. Dorinda apologizes in the most insincere way. Let’s break this up and eat dinner .

The dinner looks amazing! I love traditional Mexican food. Ramona is complimenting the staff on how the food has been incredible. Dorinda thinks Ramona is just doing a “thank you” tour and has no sincerity. Yep! The dinner conversations are basically all diversions to avoid the topic with Dorinda. Dorinda asks Leah if her company has partners. She is basically just questioning her credentials. Leah shares that she has had partners in the past but she is handling it on her own.

The poor server that is serving wine to Ramona is trying really valiantly to please her. She keeps rejecting what she is offering to her. Ramona doesn’t want older wines and she doesn’t want cold red wine. Doesn’t Ramona know aged wine is better? Luann can’t handle all of the bullsh*t going on at the table. Sonja says the niceties end really fast with Ramona. Leah tells Ramona she likes to complain to get attention. Sonja thinks she just likes the chaos she creates. Truth!

Leah is trying to follow the conversations since she is the only one who didn’t get the text message. She finally sees where Ramona sent five articles on anger issues. Leah thinks she was left out since she doesn’t consider her a friend. Luann says Ramona is freaking her out because she left a smoldering bomb of sh*t and walked away.  She doesn’t know this Ramona. She wants her to be real. There is a HUGE elephant in the room and it is named Dorinda and everyone is dancing around the issue. Can you say awkward and extremely dysfunctional?

Who would have ever guessed that Sonja would be the voice of reason? Sonja very eloquently describes how Dorinda mothers the other ladies and doesn’t ask for help for herself. She projects her pain on others. Production shows the carnage where Dorinda tore her apart on countless occasions to illustrate this. Sonja thinks she is literally cutting her own head off by not facing her own demons. Amen, Sonja, well done!

The ladies are packing to go home in the morning. Luann already hightailed it out of there early in the morning. I love how they turn the disagreement around on the one that went home. They think since Dorinda loaned Luann all of that Jovani stuff she won’t hold her ground. She will lose all of the Dorinda perks if she kept pulling the pin on the grenade. I think she just knew it wasn’t going anywhere. This conversation is a merry-go-round of dysfunction and IMO Luann wanted off the ride!

Leah shows us a glimpse of what is going on with her business. She started this business on a $75K settlement with the police department because during an arrest they knocked her teeth out. Leah is trying to expand her brand and isn’t letting anything get in her way. She can’t just be cool; it doesn’t pay the bills you know.

Ramona is meeting up with her psychologist about her loneliness. She thinks she is such a catch and has been sabotaging herself. Ramona demonstrates to her psychologist how she carries herself. She admits she isn’t really genuine when she acts all coquettish. Ramona is a very sensual woman, you know. The psychologist just nods at her and is basically just being polite and professional. He is probably thinking, “I have to fake this response to keep this cougar happy.” LOL. Ramona thinks she is cured since she loves herself (fact) and doesn’t need a man (false)!

Luann has a rehearsal and Sonja is MIA. This part of the rehearsal is actually for the part that Sonja is playing. When she gets her on the phone, she is still in her bathrobe. Sonja claims she knew nothing about the rehearsal and didn’t get the memo. Did Luann forget that today is her big day with her launch party? Remember, life is always about the cabaret in Lu’s world!

Leah has a very delicate conversation with her mom Bunny regarding what Sarah shared about not liking her sometimes. Bunny shares that her feelings fluctuate and she doesn’t like her sometimes. She has the same feelings for Sarah if she does things to upset her. It is something most mothers can say. I don’t like how you act sometimes but I still love you. I think those of us who are mothers can relate to that sentiment. Sarah definitely misconstrued the conversation when she told Leah about her mom’s comments.

Bunny feels that she doesn’t like the person she becomes when she drinks. She doesn’t want her to lose her footing again and thinks she is a much better person sober. That is some good, sage advice. Leah apologizes for her past behavior, but her mom is just trying to give her some tough love and trying not to be too judgy. She is mistaken if she thinks she won’t have similar feelings like Bunny does when her own daughter grows up. I do agree that Bunny does feel that Leah is like her worst nightmare when she drinks. Bunny doesn’t want Leah to share what she said with her sister, though! Who knew that an Irish Catholic therapist who hasn’t had a drink in 40 years would birth someone like Leah? Leah needs to be reassured that she is loved and accepted. Don’t we all? SIGH.

We are finally at Sonja’s big launch party! Leah actually comes wearing something from her line since she gave her something that she actually likes. Ramona is wearing a dress from the line but she has to do some adjusting to make it presentable. Sonja-rita struts in true Sonja fashion in her black sparkly dress with her entourage of interns. We are then treated to a bunch of clips, including Bethenny dissing her for her past endeavors. Good for Sonja — she is finally delivering! Ramona is busy having the staff make her signature drink. He is even holding her drink while she drinks out of a straw! Damn, that woman sure knows how to work people!

During Sonja’s speech, Ramona’s phone is ringing off the hook. Sonja wishes she would stop trying to set up a date for the evening and she rambles “corner table with truffles up a chicken’s a**?” What does that even mean, is she already speaking in tongues? Ramona just doesn’t know how to put her phone on vibrate. Sonja introduces the ladies as her friends/family who stood by her. She just wishes she could have pooped out the toaster oven. Dorinda just wants her to follow through with something and earn some cash. Leah likes seeing Sonja in her element enjoying the limelight. I also like seeing Sonja actually making something legit! It is nice to see an episode close on a happy note, finally!

Next week, John is back at Dorinda’s party and Ramona dissed Elyse again? Here we go again! Enjoy your weekend and take care!