Below Deck Mediterranean Recap: Rob Shows His Love For Jess With a Big Surprise; Aesha is Back to Join the Crew 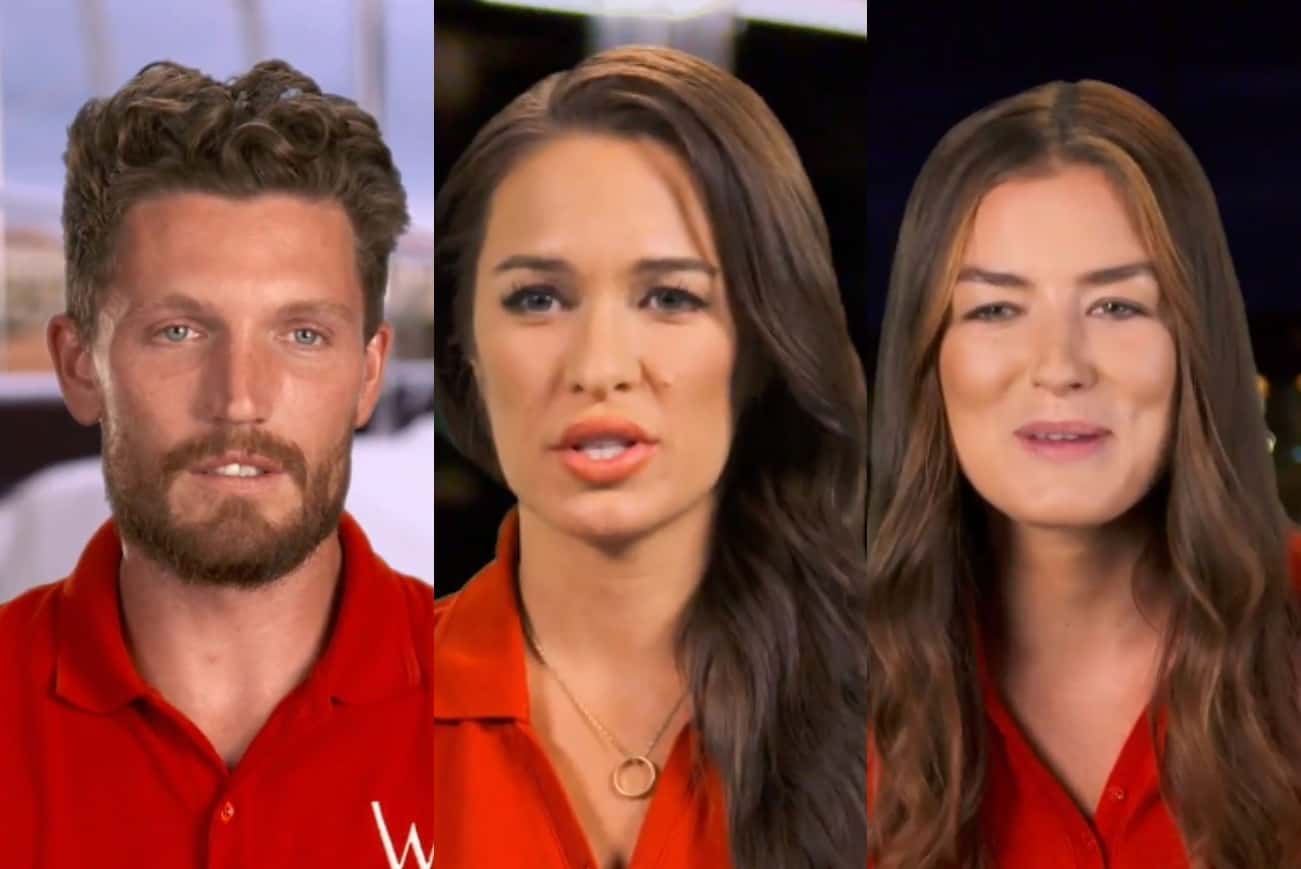 The crew is starting to unravel, but a surprise on the boat makes for a fun distraction. Plus a new stew makes her way on board. All that and more on this episode of  Below Deck Mediterranean.

In case ya’ll forgot, Tom, the new chef and Malia’s boyfriend, is throwing a LEGIT hissy fit about his j-o-b. He is annoyed that the guests prefer fried lobster and still has basically the entire crew running his plates/doing his dirty work. Somehow Tom managed to throw together a birthday cake, despite his temper tantrum, and he refers to the cake unveiling as “becoming their (the guests’) circus monkeys.” Yes, Tom. You do whatever these guests ask of you, within reason. You are working on a SUPERYACHT.

The next morning, Bugsy is fake complaining about how much she has in her hair, I mean on her plate. She is one stew down and running ragged, but let’s be real. Bugsy has been training for this step up to be the chief stew since she jumped on that boat. Bugsy was made for this role. However, a beach picnic is always a potential sh*tshow and it’s def gonna put her leadership to the test.

Bugsy is running around like a lunatic preparing for this picnic with Alex and Pete. ‘Member Pete? Yea, me neither. In the midst of all of this action, Rob and Alex exchange words. It seems like everyone’s fuse is pretty short these days. I mean, I didn’t even know Rob had emotion! To see him get annoyed with Alex is really saying a lot.

Alex asks Malia if Rob is angry with him. Malia acts like she is above their petty fighting and when she says “not to sweat the little things,” it is hilar. SHE is the one who runs to Captain Sandy for everything…

Only these charter guests would be shot-gunning beers and posing nude during this picnic on a remote beach. Between the Bugsy/Alex flirtation and the Arabian Nights theme, I can already tell that this night is going to be a doozy. It is evident that Malia is at the end of her rope because the “boys” on her crew aren’t taking her seriously. What else is new? She loses it on the “boys” when they don’t roll up the float the way she demanded and calls them all f*ckers. Nice. Great leadership!

Good for Rob for confronting Malia outright. Especially in front of Captain Sandy. He gives zero f*cks. Malia obviously tries to show off in front of the captain and explains to Rob that there are “So many moving parts, then just you and Pete that I have to work.” Translation: I have to do my boyfriend’s job because he is having a nervous breakdown and I don’t want that to actually happen to him cuz then I will have to report it to Captain Sandy.

Rob’s main issue with Malia is that she called him a f*cker. To that, Malia retorts, “Then don’t be one then.” Naturally, Captain Sandy jumps to Malia’s defense, despite the fact that she DOESN’T EVEN KNOW WHAT HAPPENED! Her blind defensiveness is next level. I mean, Malia called Rob a “f*cker,” but Rob’s behavior is disrespectful?!

I love how Malia has time to help Tom in the galley, but she jumps down the throats’ of her deck crew. Something tells me she is just frustrated by Tom’s constant help in the kitchen, but she is too prideful to see him fail so she is spreading herself thin. It’s like she is afraid to tell Tom no, so she takes her pent up aggravation out on her deck crew.

Um, someone remind Jessica that she is actually supposed to be WORKING, which is why every time she tries to steal away to suck face with Rob, she is called to help out. Eyeroll. This Bali trip better actually happen. Jess and Rob have been talking about it for so long now that it would be embarrassing if it doesn’t actually come to fruition.

The Arabian Nights theme dinner is well underway. The belly dancers are a big hit with these sex-obsessed guests. All seems to be going well until two of the guests receive some raw pink chicken. Hmmm, where is Captain Sandy now? Anyone else notice she is hardly lurking around Tom on this charter? I smell favoritism. I hate how they always make one of the crew members jump in with the entertainment. Watching Rob dance around with the belly dancer is cringeworthy. At least Rob admits that he “literally hates himself.” It looks to me like someone is trying to cover up Tom’s chicken snafu, huh?

Later, Rob attempts to smooth things over with Malia by talking about his upcoming Bali trip with Jess. Malia pretends to give a sh*t about how Rob plans to buy a ticket for the same flight as Jess. And to be honest, their relationship is not much of a storyline. Maybe if they actually worked on the yacht, it would be more interesting…

Of all the issues on the boat, Captain Sandy has laundry room problems big time. On one hand, I would be frustrated with Jess’s lack of work ethic, but on the other hand, you are down a stew. Pick your battles, lady. And while we are at it, maybe you should get in the galley and ask Tom WTF was up with his chicken last night?!

It’s the last day of the charter and OMG Bugsy trying to pronounce huevos rancheros is making me LOL. Maybe she should just stick to tablescapes, huh? The crew looks relieved to be saying goodbye to these guests, as they were…interesting. Here’s to hoping the tip is hefty.

At the tip meeting, Captain Sandy talks Bugsy up (what else is new) and she mentions that there will be a new second stew on the next charter. Everyone looks relieved/terrified of who will be the next victim, I mean crew member, on this boat. Because they will be heading to Ibiza, a five to six-hour trip, the crew has to stay on board for the night. Whatta buzz kill. But at least Johnny Damon is baaaack for the next charter.

Man, the things they plan when they are stuck on the boat for the night. Rob has made everyone become a part of his Bali trip surprise. So the big news is that he booked the same flight as Jess to Bali when all of the charters are complete. Rob has asked his crew to help him come up with a creative way to tell her, and of COURSE, Bugsy jumps into high gear. This is where she shines.

The crew is essentially planning a proposal. There are clue cards left around for Jess and Rob is on the sundeck surrounded by candles. I feel like for a minute, Jess may be disappointed not to see Rob drop onto a bended knee, amiright? Jess bumbles around following clue after clue and she finally makes her way to Rob after much ado. She doesn’t look surprised by his flight announcement and you can tell Rob was a little miffed. The weirdest thing is when everyone goes up there and cheers Rob and Jess on during their romantic moment. Also, why is everyone so dressed up just to go to bed? Yacht life is weird, huh?

The next morning, the new stew is set to arrive. Bugs states she is happy to have another body back in the interior, but let’s be real: she is enjoying the spotlight and attention on her big time. When Captain Sandy gets the text that the new stew is here, I find myself holding my breath, until I realize it’s AESHA!! WOOT WOOT. Welcome back, girl. At the very least, her smile and giggle will be a breath of fresh air on this boat…and we all know that this boat needs some positivity!