Below Deck Mediterranean Recap: Jess and Rob’s Relationship Crumbles Plus Two Charter Guests Awkwardly Fight in Front of Their Friends and the Crew 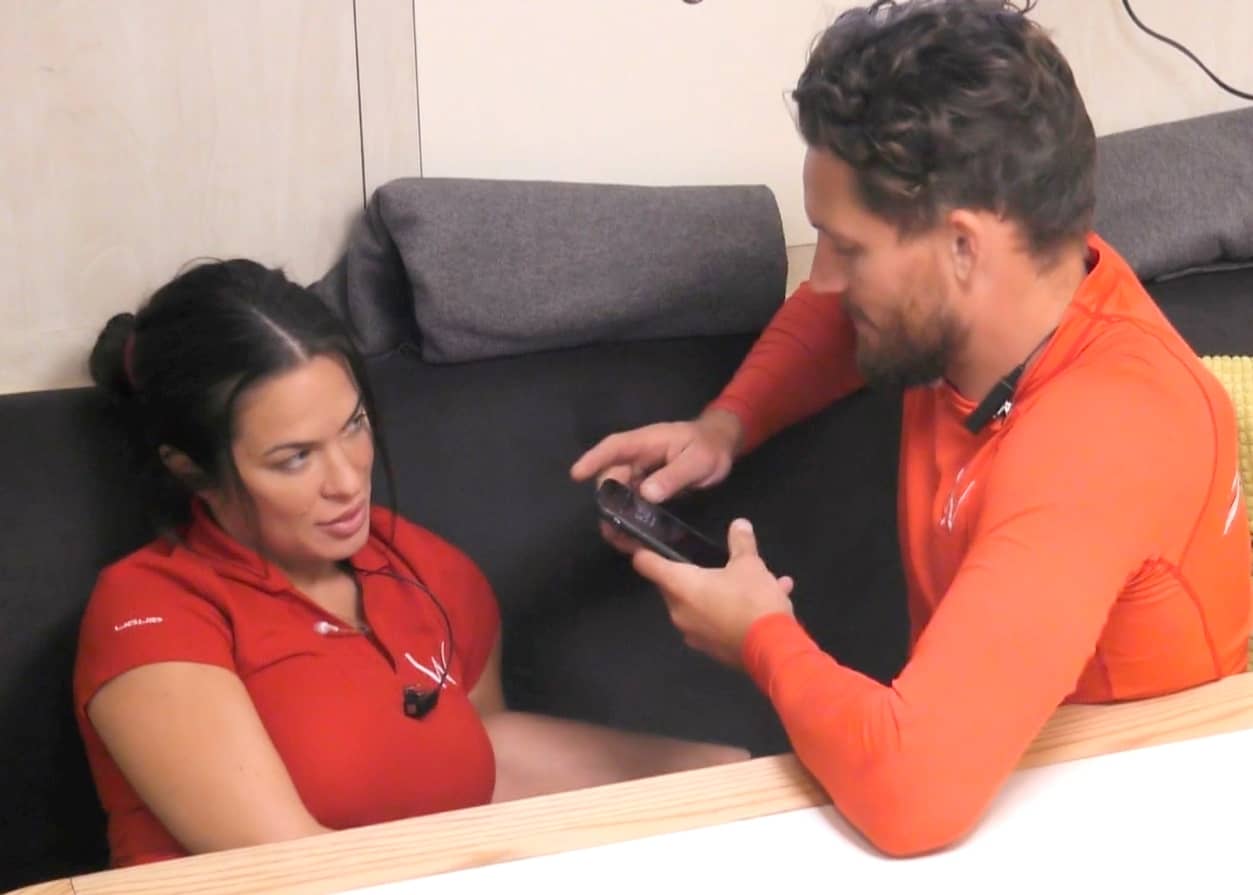 Not sure what is more exciting…a charter in Ibiza or Aesha coming back? This season of Below Deck Mediterranean is like musical crew members…how many more times can they switch out the opening credits?

Aesha makes her way onto the yacht right before the Ibiza departure and she immediately embraces Captain Sandy. Talk about a breath of fresh air. Although some captions would be helpful with Aesha. It’s getting harder and harder to understand her, especially as she gets more and more excited. Interesting how Captain Sandy introduces Tom as “our Michelin Star chef.” Woof.

Aesha meets the crew and even hugs Bugsy, despite Bugsy being her chief stew. Bugsy gives Aesha the tour, but it seems like Aesha’s got the inside scoop. She worked with the upcoming guests, the Damons, before in a charter last season. Looks like the new girl already has a leg up…

Aesha gets the low down from Bugsy on what’s been going on with the crew. It’s cool that Bugsy calls it a “coincidence” that Malia‘s chef boyfriend, Tom, just HAPPENED to be available to step up upon Kiko’s firing. Bugsy glazes over the Hannah incident, but Aesha knows what’s up, considering she is friends with Hannah. Aesha has chosen, instead, to make her own opinions on Bugsy and it seems like so far, so good.

During the stewardess meeting with Bugsy, Jessica looks a bit annoyed that she hasn’t been moved to second stew. Someone needs to remind Jess that perhaps if she showed a little discipline and oh, I don’t know, MOTIVE, things would have changed for her. Broken finger or not, Jess needed to demonstrate a bit more effort for a promotion, right?

Upon arriving in Ibiza after a four-hour passage, Captain Sandy has to pull the yacht into the tiniest spot ever. This is Malia’s chance to show the captain that perhaps she really is Sandy’s mini-me. Malia pushes the yacht (what is that helping?) and spews out directives, and although it is a bit tense there for all of the onlookers to witness at the Ibiza port, of course they squeeze in, unscathed.

Dressed in their whites, the crew welcomes Johnny Damon and his gang for a round II charter trip. As Bugsy brings the guests around, Malia pep talks her crew and everyone else gets down to business. Things get shaken up quite early on as, Adena, a charter guest, causes quite the stir. Oh dear. How does she get that drunk when the charter legit just started? Talk about a liability!

After Adena trips, falls, breaks a glass, and begins bleeding everywhere, it is imperative that someone give the stewards some gloves! OF COURSE Malia comes to save the day. What else is new? I mean, she’s putting a stinking Band-Aid on Adena and you would think she is performing brain surgery by the way she jumps in to help. I’m sure Captain Sandy is jotting this all down in her notepad full of positive Malia traits.

Well, the guests seem pleased with Tom’s chef concoctions. Tom seems to be putting in the work for these guests. I mean, he is Googling the sport of baseball (much like another chef of the past Googled unknown American topics — i.e. Vegas food). When Tom prepares his dessert and says, “I have read that it’s a white ball,” I basically lose it. COME ON, TOM. You’re telling me you are that confused about baseball? Do you live under a rock? Cut the crap. Also, maybe Tom could school Bugs because baseball umps don’t use whistles. Sigh.

Uh-oh. Trouble on the yacht. And by trouble, I mean love issues. Rob’s “ex” girlfriend has reached out to him and the ex is going through some stuff. Typical ex-girlfriend, trying to get her man back behavior. Try to explain THAT to Jess, Rob.

Wait, why are they allowing the guests to swim in jellyfish infested waters? Seems like a ploy for Malia to save the day yet again. I love how she straight-up offers her crew to go out in the waters to be on jellyfish watch. That sounds AWFUL.

The interior crew is prepping for a good old theme night. In the words of Bugsy, “A theme is a dream.” She readies her stews with tutus and face paint for the neon funky party and they are ready to rock. Unlike Rob…Mr. Sulky. Why is he so blatantly honest with Captain Sandy? He straight-up tells her that he is checked out and that he is in his own head. Here’s an idea: fake it! We can’t afford losing yet ANOTHER crew member…

This funky neon party looks more like a rave gone bad. When Johnny Damon smears that face paint on his cheeks, I can tell we are in for a long night. Captain Sandy hovers as Damon takes his first bite of food and she is looking for his reaction. I am so happy to see she is back to her micro-managing self. When Damon states the food was “warm” and not hot, Captain Sandy bolts down to the galley to report the statement to Tom. The captain suggests putting a bowl over Damon’s dish to attempt to keep his hot. I just wish she was as gentle with Kiko as she is now with Tom.

In the hustle of getting the guests their food and trying to balance the bowl AND plate for the primary, Bugsy drops Damon’s plate. Loving how Malia runs and rats to Tom that Bugs dropped the plate. Once a tattle-tale, always a tattle-tale. Tom recovers amazingly and cranks out another dish all while his sous chef, I mean, Malia, continues to help him in the galley.

A night of drunken fights ensues for the guests, but it’s business as usual for the crew on the second day of charter. In the morning, Rob finally admits to Jess about being shady AF with his ex-girlfriend and we certainly don’t need Jess to have a reason to be any more unfocused at work. Rob begins gaslighting Jess and making it seem like this is *her* problem. Rob pretending that his ex texting him is out of his control is so dumb. He even goes as far as telling Alex, “I just asked her not to make it about herself.” To be fair, this kinda is about Jess, Rob. You told the girl you loved her and now you’re back to chatting with your ex? Find one girl who would think this behavior is okay.

Alex attempts to talk to Jess about Rob’s texting fiasco, but the truth is, Rob has the power to control this situation, he just chooses not to. Unclear why Alex feels the need to insert himself in the situation, but I guess because he is friendly with Jess from a previous charter, he feels as though he can take a stand. Really though, name one boat romance that has lasted. The writing was on the wall for this couple. Better hope your Bali ticket is refundable, Rob.

Upon hearing that Bugsy is sending Aesha to the closing party with the guests, Aesha gets pumped and shouts, “I’ve got shots up my box already.” Aesha calls a closing party in Ibiza a “real-life acid trip” and I am beginning to see what she means once the guests arrive at the event. WILD.

While the guests are away, Captain Sandy permits the crew to play on the toys and have some fun. Everyone is having a great time. Jess is in her thong bathing suit while Rob is 100% under the blankets in the bunk texting his ex. Alex is still trying to mack it to Bugsy. It’s so awkward when he starts spilling his heart out to her while on the jet skis. Kiiiind of wish Bugs would just give Alex a chance already.

As Aesha (and Pete…who??) are raging with the guests, Jess begins experiencing some heart palpitations on the yacht. Perhaps Jess is having an anxiety attack. Interesting to see Malia try and help her. Maybe someone should get Jess some Valium…er, wait…too soon?

TELL US- THOUGHTS ON THE LATEST BELOW DECK MED EPISODE?