RHOP Recap: Candiace Shares Scandalous Text About Michael as Wendy and Ashley Hash Out Their Drama 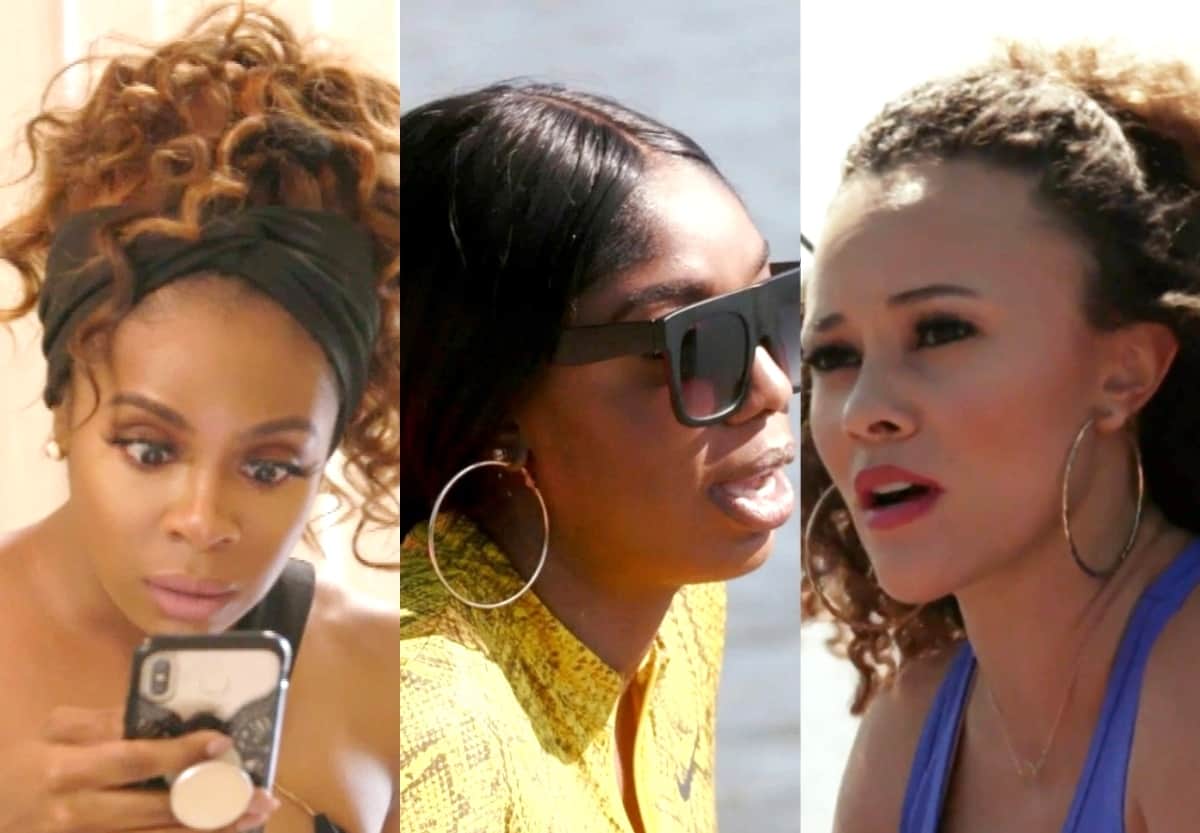 On this week’s episode of the Real Housewives of Potomac, we begin with the dysfunctional dinner that went off the rails last week. Let’s see if we can get through this dinner without any casualties.

I know she is a very intelligent woman but when she gets like this, it brings her down to a level that just doesn’t seem too dignified for someone with her credentials. Robyn tries to get Wendy to see that her frustrations were misdirected but Wendy has baby tunnel vision. Karen is just befuddled about what planet Dr. Wendy is on. She knows she herself can be crazy but Wendy is whacked.

Wendy thinks Ashley, aka the bug, is broke x2 because she is personally broke and so is her bo*ty hole. Enough with this conversation at the darn dinner table! Monique can’t take another one like Candiace. That is way too much aggressive energy. I agree! I don’t think any of us can handle that much toxic energy. Monique wishes that Wendy had just stayed home if it was such an inconvenience to be there. Karen is over resorting to calling each other bit*es since she hasn’t done it in a long time. Hold your shady self up, Miss Karen! Cue Production clips! After everyone pretty much should have indigestion, they call it a night.

Wendy and Candiace are sharing a room and she is still defending her actions towards Ashley. She thinks since her baby was a preemie it was different. Listen those ladies weren’t in the NICU with Wendy so don’t tell her how to react! Candiace, with her bo*ty hole clenched, wishes Wendy didn’t call Ashley a fake a*s bi*ch. It was a little too soon for Wendy to go on attack mode. She can’t let herself get thrown in the lake since she is wearing a wig for goodness sakes.

In the morning, the ladies are all wearing their custom robes courtesy of Monique. Wendy’s name was misspelled and also where is the Dr. title? Gizelle and Monique have a “pancake off”. Monique prefers hers pretty and perfect. Gizelle thinks Monique’s tastes like oil. Monique thinks Gizelle’s are all wrong just like her fashion choices. Wendy is giving the scores for the presentation and taste. T’Challa, who might or might not be the breakout star of the season, says Monique’s are perfect and anything that is said negative is all lies! Monique wins 39 to 35. Yeah, don’t piss T’Challa off and shade his mama, he will dive bomb you!

Ashley is trying to reach Michael while holding the baby. Michael allegedly had a business deal the night before and then production goes forward 12 hours in time. We then see Candiace receiving the not so innocent text from a friend production assistant. Ashley tells Dean “I don’t know how Mommy is going to function today.” She also makes a comment that she is used to caring for Dean since Michael isn’t around all of the time. There is some trouble in the Darby household when it comes to their “unconventional” marriage.

Monique is not too happy when Chris calls and says he isn’t going to cook when he comes to the lake house. He wants to cater it instead. Monique is disappointed that he isn’t doing anything special for her birthday instead of just hiring help to cover it. Come on, Chris, throw some stuff on the BBQ grill and make your wife happy!

Wendy is still sticking to her guns about baby-gate. Seeing baby Dean made her miss her baby and it was a painful reminder. Gizelle is trying to shift Wendy’s anger towards Karen. She is really stirring the pot right now and that is not how the anointed behave. Ms. Gizelle tells Wendy that Karen refers to her as a floozy/freelancer. Wendy won’t let Karen Huger’s a*s dim her super smart light. She is no freelancer and not a “dum-dum”.

Gizelle isn’t interested in fishing for her dinner and just wants a spa vacation.  Monique wants everyone to participate in this activity but I think she forgot who she was dealing with. Monique aka ‘Jane the Jungle ho’ is baiting her hooks and seems very comfortable in this setting. She then goes out on her kayak enjoying her peace and the fresh air. Candiace and Robyn are basically just screeching and going in circles trying to steer their kayak.

Wendy actually admits to Ashley that her delivery wasn’t cool and she is owning her sh*t. She thinks she crossed the line calling her a bit*h #Progress. Karen is shocked at this quick swing in Wendy’s mood. Ashley and Wendy actually bond over the challenges of being a mom. She tells her about the postpartum depression and they now understand each other. Phew, thankfully no one got drowned in the lake and there were no wig casualties.

Gizelle keeps trying to call Jamal but there is no cell service. Don’t worry Gizelle, he is doing just fine and probably being very well taken care of. Ashley is FaceTiming with Michael about the baby. In her ITM, she is asked “Does Michael mind being 2nd to the baby?” She admits he hates it and wants to be put first. That is not good when you don’t have your priorities straight. Michael admits he is hungover from the night before. Karen tries to call Ray and he seems totally uninterested in hearing from her. He can’t get off that phone fast enough.

Candiace wants to model herself after some of these moms who are chill parents. She worries about being a parent since Ashley is clearly struggling with it. Candiace should be worried since it is no longer all about you when you have kids.

While the ladies are chowing down on the food and taking advantage of Monique’s hospitality, they are complaining in their ITM’s.  The ladies are getting a little stir crazy. There is actually a counter timing their minutes in captivity. Why are they seeing this trip as a chore? Come on ladies! You are all too much work to entertain. They all feel like they were kidnapped since they don’t have cell service.

We now have a Lady of the River/Lake Pageant between the beauty queens Ashley and Candiace aka Pageant Patty! They both are all game on and will fight to the end to win this beauty battle!  Ashley has got this even with her damaged bo*ty.  They both do the pageant walk and work it and smize away!

They then go to the question/answer portion. Gizelle asks her first shady question to Candiace, “How do you feel about being so short?” I love when T’Challa calls Gizelle a trick for asking that question. Too funny, I am enjoying this shady bird talk. Candiace claims it helps her vertically challenged self to encourage others to reach for their dreams. Ashley gets asked about her extra-large forehead. Boom, Ashley wins it with her response. It means she has more brain power and also pays Candiace a compliment saying good things come in small packages. Karen in her ITM thinks Gizelle has no business shading others over their body parts with her stovepipe legs!  She wants her chance to ask Gizelle those questions.

The talent portion starts. Ashley decides to do a twerk session which is pretty impressive with a broken bo*ty hole. Candiace decides to do a tired rendition of “Happy Birthday” for Monique.  She wins the competition, huh why?

Candiace then gets a producer’s text that Ashley’s hubby was out with strippers. Ok, not so bad, but he was asking random women to come back to his hotel. He also allegedly made it known he not only has a wife, but he also has a boyfriend… allegedly. She claims the friend is a good source so she thinks it is legit dirt on Michael. Side Note: Ashley is now sharing that she and Michael don’t have a marriage that is conventional. No duh.

For super shady reasons, instead of going to Ashley, who is THERE IN THE KITCHEN she heads to the other house.  Candiace chooses to tell Gizelle about the text since she and Ashley are BFF’s, yeah right. Gizelle is basically salivating and wants to hear the text read aloud. Now if you were a true friend why would you tell Gizelle of all people unless you were looking to put this stuff on blast? They decide to tell her at dinner tonight.

The ladies go out to dinner all dressed up for the crab shack. They get a lot of attention since they are overly glammed up for this place. Wendy shares that things are good with Ashley. Candiace pretends to be troubled by the text that she received. Monique vents about Chris and not stepping up his husband and dad game.  Robyn understands since Juan is an athlete and is used to being catered to. Ashley finds out what she has thought for years was mustard was actually crab leg poop! Hey, what you don’t know won’t hurt you!

Karen basically lies when asked about Ray missing her. Admit it, Karen, KAREN, he just wants to be left alone and play golf in her absence.  In Wendy’s ITM she thinks Karen is phony. Now the real burning question… How is Michael? Ashley claims he has a lot of stuff going on. Yep, he sure does, those lap dances are very time consuming.  Now we have another to-be-continued…

Next week, Ashley confronts Michael about the text and the other ladies wonder how perfect Monique really is? I hope you are all having a wonderful Labor Day Weekend! Be safe and take care!