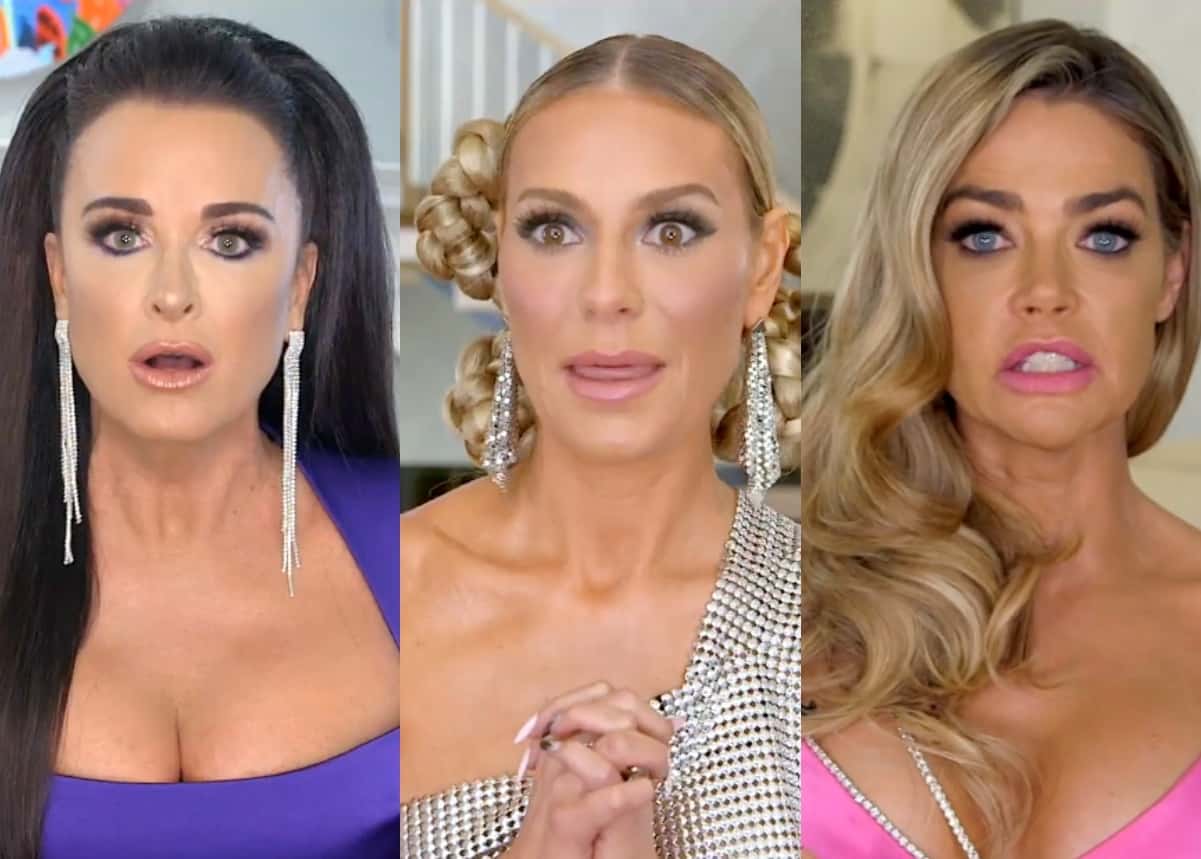 “Is the cover-up worse than the crime?” The jury is still out on that, but the attacks just keep coming on part two of the Real Housewives of Beverly Hills reunion.

At the start of part two, the women are getting their makeup touched up and calling for their homes to be warmer. You know, like the true extra ladies they are. That’s why I am LOVING Denise grabbing her Lay’s potato chips. Now THAT’S reality television #agirlsgottaeat.

It’s incredible watching Kyle’s season in review, particularly because she has referred to the crew as “a group of fake a*s b*tches.” Kyle just felt soooo under attack while filming and tries to explain her feelings to Andy. One of the biggest gripes with the women is that Kyle refuses to admit she is closer with Teddi than the others. I die when Garcelle states, “It’s so blatant. Even Stevie Wonder can see it.” How did I miss that gem the first time around?

Kyle explains that she was just so tired from all of her work (that she’s finally getting) and she was trying to balance it all. Therefore, she did not appreciate Dorit strolling into Teddi’s lame accountability camp late and fully glammed up. Translation: Kyle was JEALOUS that Dorit was all dolled up and she didn’t have the opportunity to do so. What is happening here is a classic case of jealousy.

When Dorit jumps into the ring, it is very clear that there seems to be a lot of attacking going on.  First Kyle was doing the fighting, but now it’s Dorit. Dorit doesn’t let up on Kyle when the “I have a life” comment resurfaces. Dorit keeps the pressure on Kyle, much like a dog holding onto its bone. Obviously, Kyle can’t take the heat and tries to change gears. Kyle states that Dorit has been coming at her all season long. Cry me a river.

OF COURSE Teddi interjects and tries to defend her friend, Kyle. But alas, Dorit won’t let Kyle off the hook. She is demanding that Kyle acknowledge the fact that she is more friends with Teddi than anyone else. Kyle feels like her back’s against the wall, so she eventually admits that she is closest with Teddi. Why this matters to Dorit is beyond me, but she finally got her answer!

It’s hilarious that the constant competition between Dorit and Kyle has finally reached a breaking point. The back and forth is becoming exhausting. It really hits a new level, though, when Kyle talks about Dorit’s “hurtful” confessionals. Kyle hates how Dorit talked so much crap about her designs. When Garcelle attempts to interject, Dorit makes it clear that this fight is between her and Kyle only.

Dorit says, “Kyle, this is very important because you are very important to me.” These women behave like 12-year-olds. When Andy asks if they are speaking, Kyle shakes her head no to the camera. The drama!! The only person enjoying this back and forth is Garcelle — she just sits back and chuckles under her breath. Eventually, Dorit offers a very sincere apology to Kyle…yet Kyle simply accepts and does not return the apology. Typical.

RAGAMUFFIN: A term used to describe Denise Richards by Kyle. Because she is Denise, she couldn’t care less and calls Kyle’s bluff for her belated apology. Kyle ONLY apologized after the show aired and after she got some backlash. How convenient. Maybe Kyle should remember next time that she is, ya know, getting filmed. Perhaps she should watch what she says about other people.

Oh man, Rinna and Amelia. That girl is going through SOMETHING, but Rinna just keeps on doing her thang, even if posing nude and dancing in her underwear could potentially set off her daughter with the eating disorder. Garcelle’s comment about Rinna’s choice to behave in that manner while her daughter deals with her issues becomes the center of the conversation.

Rinna explains that what may be on Garcelle’s mind might not be on her *own* mind. Garcelle backs her comment by stating that Rinna is a great mother, but perhaps it should be something she would want to think about in the future. Leave it to Dorit to try and make this Garcelle comment something. She claims that the women were having a light-hearted conversation in Rome when Garcelle had to turn it dark by questioning Rinna’s mothering choices. Reminder: During that “light-hearted conversation” (Dorit’s words), Garcelle was talking about her kid’s addiction, so there’s that.

When Sutton calls Rinna’s dancing weird and Dorit tries to make Sutton look bad, Sutton retorts, “Well, Dorit, let’s make it into a bigger deal. Why don’t we do that?” Sutton is my hero. Update on Amelia: She’s doing well in her nearly $6,000.00 a month apartment and “making more money than everyone here” from modeling. I would like to see those receipts, Rinna.

And listen, Rinna — if you write a book, expect people to read it…and by people, I mean your daughters’ friends. The content of that book was bound to make its way to your kids, so don’t act surprised! OMG Denise’s face when Rinna says she loves attention. PRICELESS.

Teddi shares a little about baby Dove. Dove is going to have neurosurgery in two weeks to fix her issue and all the women express their support and care. The way Teddi was able to sway her husband to pick the name “Dove” was by telling him that the baby would have her own emoji?! These people… Seems like all the housewives forgot Teddi was pregnant this season, and that’s ok because sometimes I forget about Teddi altogether. I mean, even her season montage was a snooze. When Teddi isn’t stirring the pot, there’s not much to her.

Wow. Denise’s face during the Brandi segment is a mix of smugness and anger. I can’t tell if she is giving us a poker face or trying her hardest not to freak the f*ck out on these women. Denise doesn’t even flinch re-watching the scene when Teddi comes out with the rumor about her alleged hook up with Brandi. Denise states that she “has the balls” to come to the reunion and sit there, as per Rinna’s request. Boom.

Denise claims that her text messages with Brandi were surface. Andy attempts to make Denise eat her own words by showing a clip from BravoCon last year, but he misses the mark. Hey, Andy, there is a difference between friendly and being a friend. He has been around these housewives for too long…he’s starting to think like them now!

Rinna keeps demanding, “Denise, you can’t keep lying.” When the back and forth about Denise and Brandi becomes too much for these dopes to handle, they begin asking where Brandi is. I am here for Denise reminding Rinna that Brandi is not a part of this show, so really, Brandi doesn’t belong at this reunion. Erika assumes that Denise has stopped Brandi from coming on, but Andy jumps in and shuts that down fast by explaining that Bravo has made the decision to stop Brandi from making an appearance. Essentially, Brandi has said it ALLLLLL, and really, what else is there for her to say?

Denise is perplexed by why she has to explain and defend herself. To that, Rinna retorts, “Well then you probably shouldn’t have done it.” Whoa, when did Rinna become the morality police? Kyle wants to get to the bottom of Denise’s claim that Brandi has slept with another of the housewives. She yells, “Raise your hand if you slept with Brandi Glanville!” (OMG, I think I saw Denise’s hand go up, but I am not 100% sure…!!)

Denise refuses to out the other woman who slept with Brandi, despite the prodding and pressure. The women have issues with Denise’s inability to be direct and honest, but really, Denise is dancing around the questions HARD. When Denise can’t figure out how to respond to the mob that is forming around here, she calls the women vicious. She’s not wrong. And she definitely has way more to say.