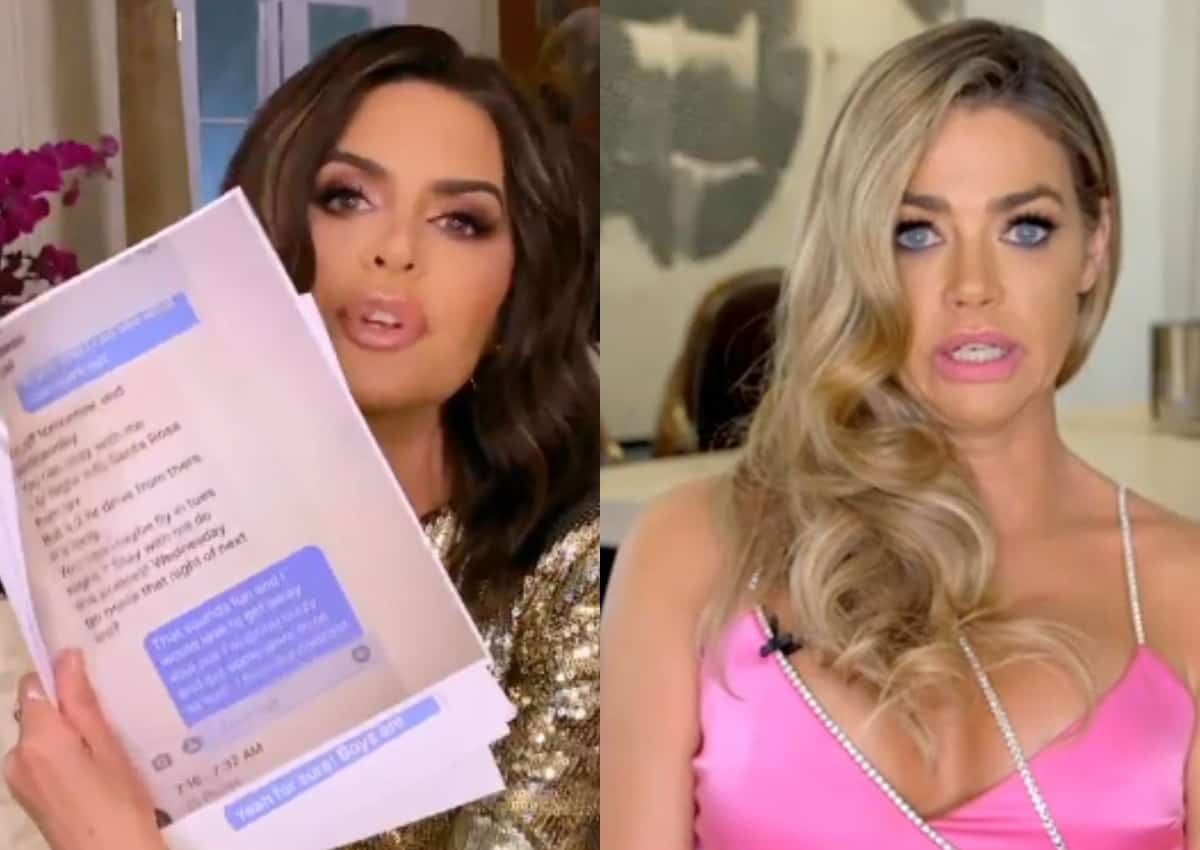 After what feels like 85 years, the Real Housewives of Beverly Hills reunion ends, and so does a 20-year friendship…

Denise is still dodging question after question from these prying women. WHY. DO. THEY. CARE. SO. MUCH??? She cannot get over Teddi bringing up the rumor at their dinner in Rome and assumed because Teddi has a famous father, she would have been a little more sensitive to the content of the conversation. Sigh. Silly Denise. That’s EXACTLY why Teddi outed you at that very moment.

Everyone keeps wondering how Denise knows what Brandi thinks of all the women if Denise has only talked to Brandi about three times…Denise’s words. Apparently, when Brandi found out Denise got cast on the show, Brandi spilled “diarrhea of the mouth” about all of the women, essentially warning Denise.

When Andy asks about alllllll of the details Brandi spilled to Kyle and company about the alleged Denise hookup, Denise has no answers. She denies that Aaron wasn’t around when this occurred, but she does say Brandi came into her room for something or other. I start to scratch my head when Denise says certain things, as do many of the other women. Kyle’s issue is that Denise has a pattern of not being honest. When Denise catches herself in a lie about the where and when, it starts looking bad.

As the bickering between Kyle and Denise escalates, Andy yells out, “I have to move on or I’m gonna die.” AMEN, Andy. Some things are just not meant for Zoom…a Housewives reunion is def one of them. I love it when Sutton interjects. She explains that she heard this Brandi/Denise rumor back in 2018, so it is a bit curious about the extent of their relationship the way Denise frames it.

OF COURSE Lisa ‘I Don’t Have a Storyline of My Own This season’ Rinna came to play dirty and printed the receipts. Because she doesn’t like “bullsh*t,” and is willing to throw anyone under the bus for a quick buck, Rinna got her hands on all the texts between Denise and Brandi. WHY! To this, Denise fires back and asks Rinna if she would be okay with sharing the texts from her. Boom. Rinna can’t handle it and shrieks, “Are you threatening me?” Yes, Rinna, I believe Denise is threatening you. And how hypocritical for Rinna to claim this “isn’t about her.” LOL. Garcelle looks like she would rather take a long walk off of a short pier than listen to these women anymore.

The topic of the cease and desist surfaces. It seems as though these ladies could stand to use a dictionary. No one knows exactly what this means, but they are guessing Denise enacted it as a muzzle for Brandi. When Garcelle questions why Rinna cares so much about this rumor, Rinna retorts that she has been “dealing with this for the last six and a half months.” Uh, Rinna, what exactly are you “dealing with” for the last six and half months?! Garcelle laughs out loud when Rinna states she wishes Denise would come talk to her about her problems. Rinna is so full of it…

Either Denise is totally checked out or she is searching through her phone for her text messages. Anyone else catch her scrolling away? She is so over this storyline, as most of the world is, too. As the ladies keep yelling out things like “own it” and “tell the truth,” Andy reminds them that they are “just not accepting” Denise’s truth. Thank you!

So during the Erika season recap, we get reminded that she does have feelings and that she started her career by go-go dancing at Shakers. How far she has come! When discussing Chicago, Erika lets everyone know that her husband, Tom, never got to see the show (act shocked, ya’ll). I wonder if Harry Hamlin went to see Rinna when she starred as Roxie Hart in Chicago? Don’t ever forget Rinna played that role, too.

When Rinna goes on the defense after being ridiculed for stealing Erika’s thunder every time she talked about Chicago, Rinna does what she does best and deflects. She jumps down Garcelle’s throat and states, “I was on a plane and I went to go see Erika, and gosh you weren’t.” Garcelle doesn’t skip a beat and shuts her down. But then, Erika butts in and saves Rinna’s a*s, saying she wasn’t offended over Rinna’s incessant competition with her regarding Roxie Hart. Eyeroll.  #meangirlsunit.

Denise looks like she really wants to kick Teddi’s butt. Teddi wants to know why Denise AND Garcelle weren’t there to support Erika while she was on Broadway. I just wanna jump through the screen and scream WHY, TEDDI. Denise claims she only found out about the trip the night before. But Andy checks her by saying, “I was told it was at the time you were suing us.” Touché, Andy.

Garcelle explains she didn’t go to NY because she is “deathly afraid of small planes.” These women are great at making something out of nothing, especially when Rinna questions why Garcelle couldn’t actually make it. Garcelle does not falter and sticks to HER truth…something more of these women should try once in a while.

It’s the end of Denise and Rinna’s 20-year friendship. Rewatching the segment from the season when Rinna cries about not wanting to hurt Denise is painful. Denise can hardly stand to view the clips. She shakes her head at Rinna’s lies as she plays on her phone. When asked how Rinna has changed, Denise retorts, “I need to eat something before I answer that question.” And with that, she straight leaves the set. In case you forgot, she’s Denise f*cking Richards and she does what she wants.

With shoes in hand, Denise states she is done and has 48 pages to memorize for tomorrow. Yet, she remains in the chair and spills about Rinna. Denise says that Rinna is very different than she is on the show, and I believe that. Denise looks p*ssed and sad and like she actually cares that her friendship with Rinna is over.

Andy trying to boss Denise around and make her stay is hilarious. I am unclear why Rinna cares so much! It’s so weird…it’s also so weird that Rinna didn’t give Denise a heads up about the rumor in Rome. Rinna is no friend to Denise. Side note: *Excuse me while I go Google the Heather Locklear thing.* Andy reminds Denise that Rinna was SO excited about her coming on the show.  I can guess what has changed is the fact that Denise gets paid more than Rinna. Looks like they can kiss their friendship goodbye….

Sutton, don’t say goodbye forever. Something tells me you’ll be back, girl. As opposed to Denise. This is the end for her. Denise states that she would want to be friends with SOME of the ladies and we all know which ones. Garcelle can’t get over the fact that the show is REALLY not scripted, Teddi is still boring, and Erika claims that this was a great season for her, despite all of the fighting. Rinna wouldn’t change anything from this season because she is a “truth-teller”– gag. She robotically states it is too bad that her friendship with Denise is in a rocky place. But alas, she doesn’t see a resolution in the future.

When Kyle says, “I think this group moves forward by really being honest,” I have to laugh, as it is an interesting statement. Perhaps after 10 years of being on this show, she should take her own advice. Dorit advises that as long as both parties want to move on, things can get better. She then grabs her Gucci glass with Gucci cubes (WTF) and makes a toast: “May the only pain in your glass be champagne.” Well said, Dorit. But of course, Kyle needs to get the last word and chimes in with some lame additional toast. So symbolic of the season, huh? Cheers to the end!