Home Real Housewives of Beverly Hills News Denise Richards Reacts to Brandi Accusing Kyle of Sending Her a Cease and Desist Letter in 2015 Tweet, Admits She Made a Mistake When She Turned on Lisa Vanderpump Last Season

Denise Richards Reacts to Brandi Accusing Kyle of Sending Her a Cease and Desist Letter in 2015 Tweet, Admits She Made a Mistake When She Turned on Lisa Vanderpump Last Season 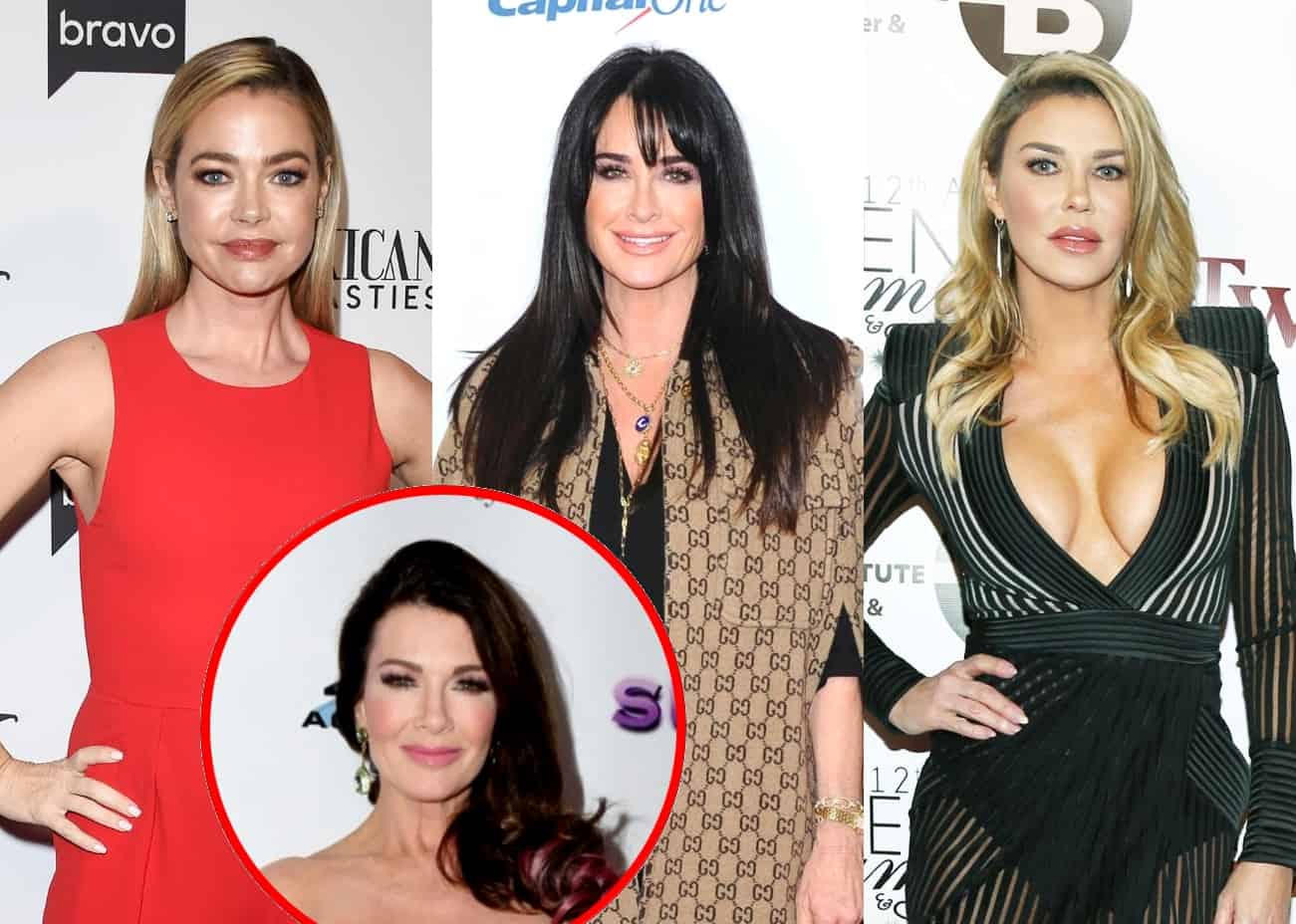 Denise Richards just learned that Kyle Richards sent a letter of cease and desist to Brandi Glanville in 2015.

On Twitter, amid the latest episode of The Real Housewives of Beverly Hills on Wednesday that featured Brandi going public with their alleged affair and the mean things Denise reportedly said about the cast, Denise explained why she wished she learned the information sooner before reacting to a fan who accused her of turning on Lisa Vanderpump during season nine.

After a fan shared a couple of screenshots in regard to Kyle and Brandi’s past legal drama, which began after Brandi made some allegations about “family real estate drama” regarding Kyle’s family, Denise suggested that she would have loved to bring up the issue during last week’s RHOBH reunion taping.

“I wish I knew that before taping the reunion,” Denise replied. 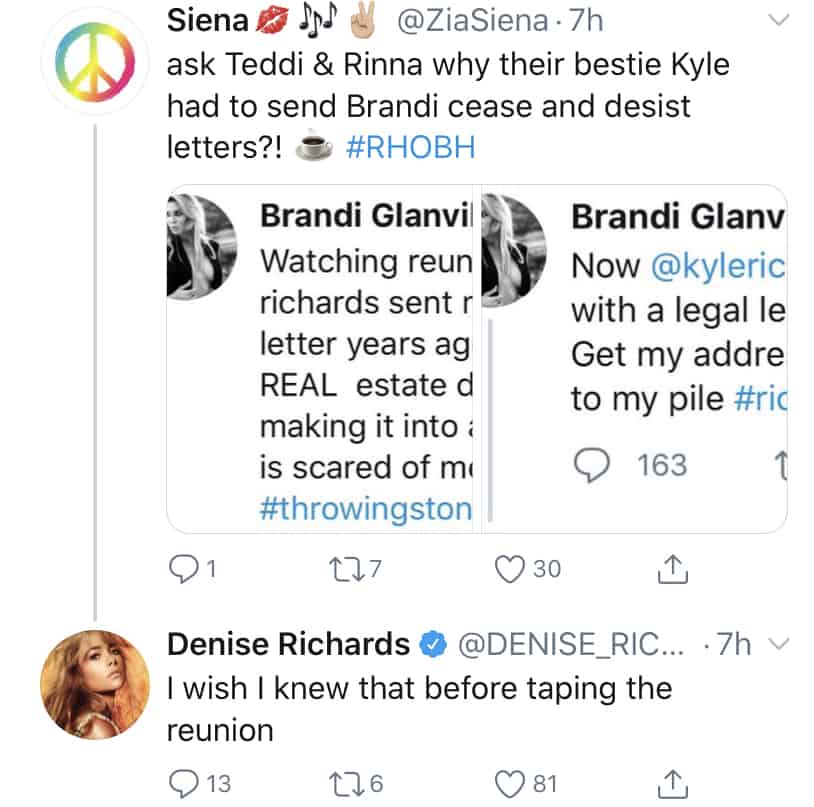 In a Tweet from June 2015, Brandi claimed Kyle was “threatening” her with a legal letter due to her Tweets and slammed her as a “rich coward.”  And in a separate Tweet from 2018, Brandi recalled getting the cease and desist letter from Kyle while she watched the RHOBH reunion that year.

It appears the legal threat came after Brandi accused Kyle’s husband Mauricio Umansky, of allegedly backstabbing his brother-in-law, Rick Hilton, when he went off to start his now successful real estate agency. 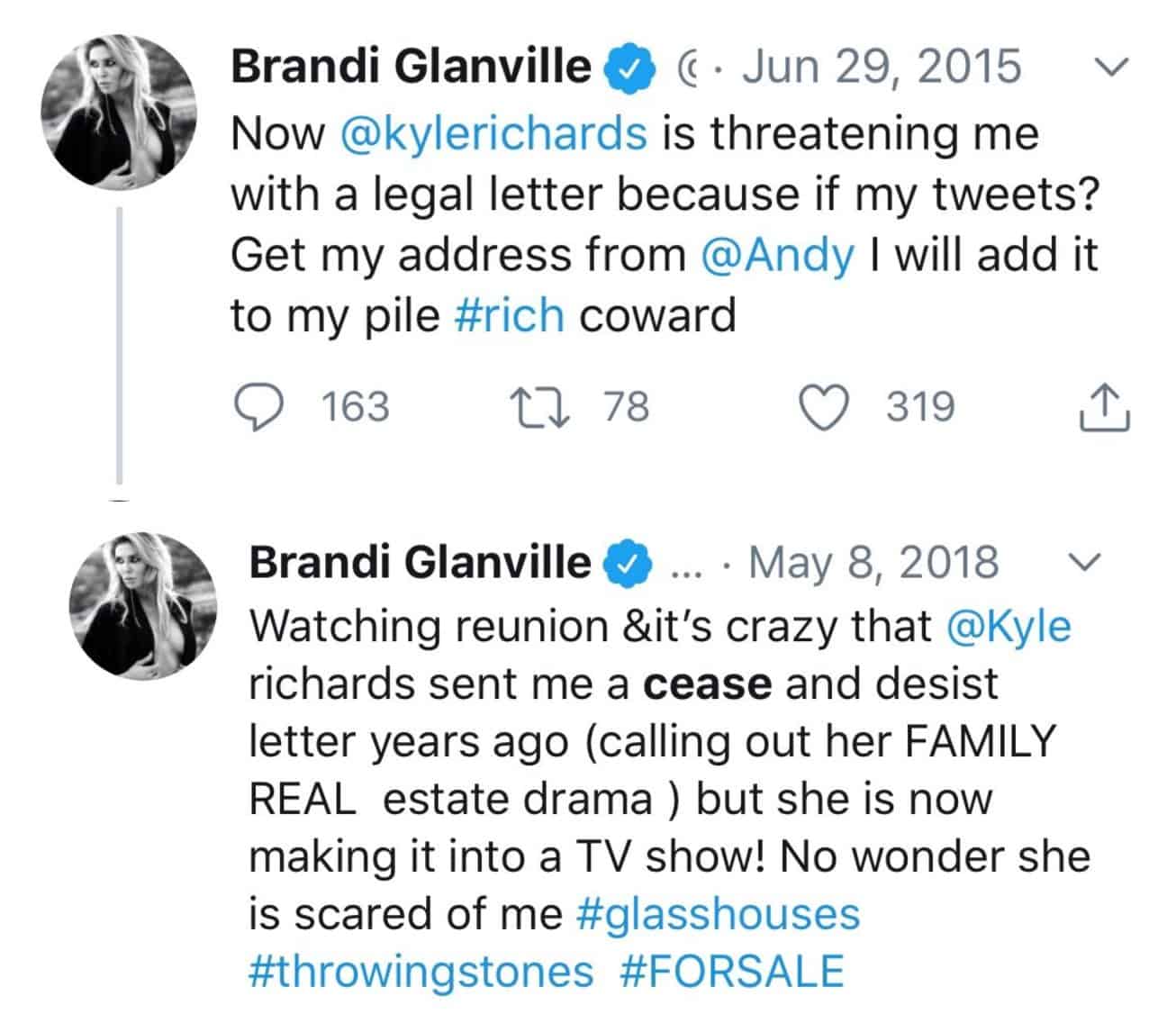 As RHOBH fans will recall, Denise sent her own letter of cease and desist to Brandi at the end of last year during filming on season 10 and after last Thursday’s virtual reunion, Lisa Rinna suggested that the letter had led to the taping being “bullsh*t.”

In a second tweet, Denise responded to another person who pointed out that she had turned on Lisa during season nine in the same way that her castmates turned on her during season 10.

“Denise turned on [Lisa Vanderpump] the same way, without knowing [sh*t] and after acting like she was [Lisa’s] friend. Turn around is fair play,” the fan had written.

In response, Denise said that while she sided against Lisa after she was accused of leaking a story about Dorit Kemsley and the supposed abandonment of her dog, Lucy, she has since acknowledged that doing so was a “mistake.”

“I admitted on the show I made a mistake [and] felt terrible about it and shame on me not making a judgement 100 percent from my experience,” Denise said. 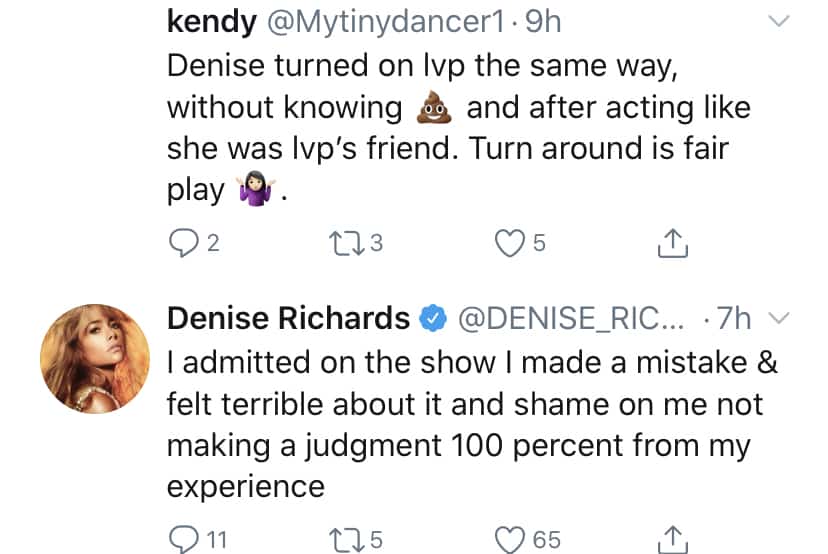