Home Real Housewives of Beverly Hills News RHOBH Recap: Brandi Breaks Down Over Being ‘The Other Woman’ in Denise’s Marriage, Claims Denise Lied to Her

RHOBH Recap: Brandi Breaks Down Over Being ‘The Other Woman’ in Denise’s Marriage, Claims Denise Lied to Her 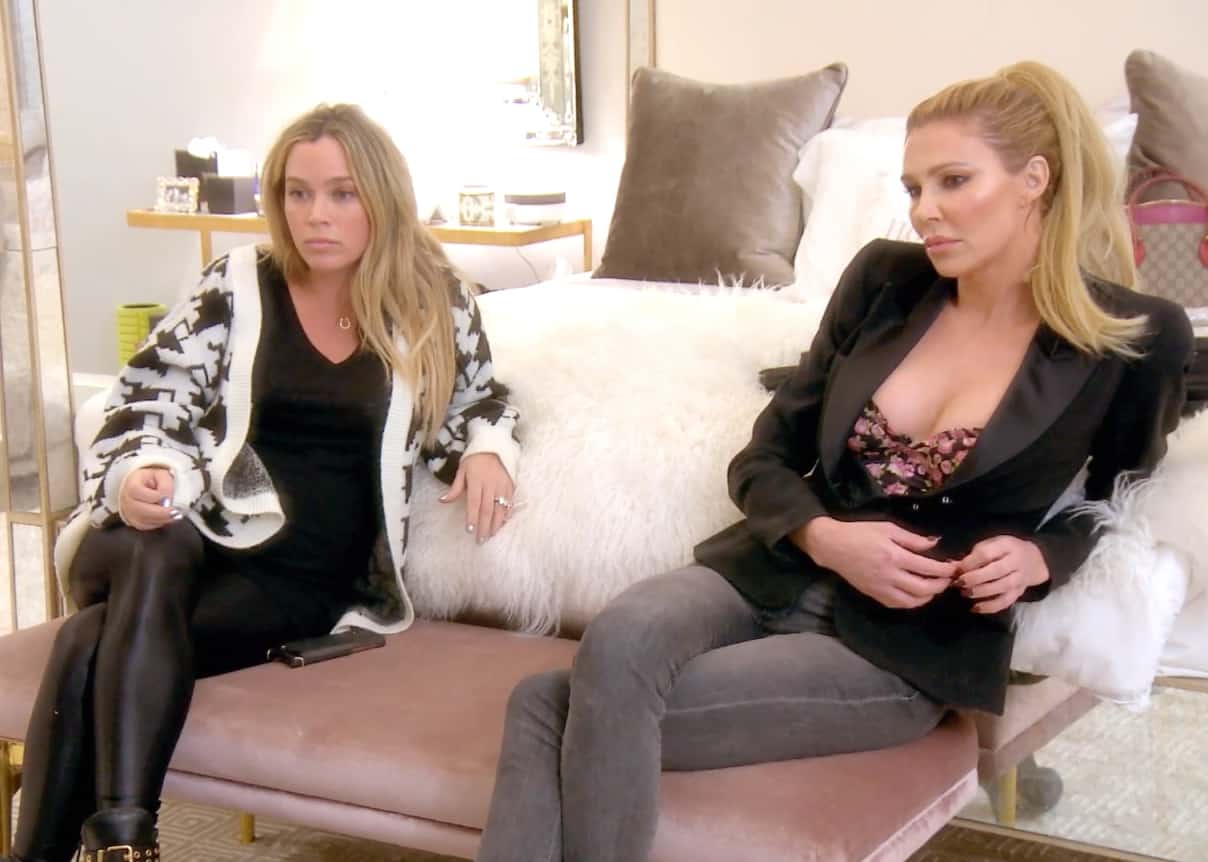 So much for not kissing and telling.  A bombshell gets dropped on this episode of the Real Housewives of Beverly Hills.

Kyle’s Black and White Gala is going strong. There are still oodles of celebs there and Teddi is still not over Camille and her “pleasantries.” Camille is evidently on an apology tour and lets Teddi and Denise know that she is sorry for her behavior at the reunion. Although Denise is forgiving, Teddi essentially shoos Camille away, leaving Camille wondering if all is better between them. Teddi is, however, hoping to fix her friendship with Denise. Personally, I think Teddi should be more concerned with fixing her pink hair in that confessional…

How does Kyle have so much time to just meddle in everyone’s business when she should be being the hostess with the mostest? Upon saying goodbye to Kyle, Camille states it’s time to put the past in the past, but come on. These women have NO clue how to do that. Garcelle is the only one who realizes how petty these women are and gives a burn: “I think I’ve been in that situation…but I was in middle school.” Boom.

When Wilson Phillips pops up on stage, everyone is impressed, even Kris Jenner. Never forget “Kyle’s friend.” The only one not up front filming the show is Dorit, because let’s face it, she is the OG surprise concert thrower.

Do Brandi and Adrienne go to the same plastic surgeon? If so, that surgeon should be fired…did you get a load of their faces? Man, Brandi is really throwing it back to the surrogacy scandal with Adrienne. Talk about being thirsty…and I am not just talking about the massive shots Brandi is taking. She is well on her way to becoming a hot mess express when she tells Denise and Aaron, “I wanna be a throuple with you guys!” I love how Denise pretends like she doesn’t know what that means. I bet Sam, her daughter, does! Brandi is just a drunken disaster, so not much has changed.

Erika has a collab with ShoeDazzle, cuz ya know, the sky’s the limit for her. Plus it’s just another event to watch these ladies prepare for. Hearing Rinna say, “I think I was born a drag queen really” takes the cake if you ask me. I wish I could have Mikey, Erika’s creative director, following me around and being my personal cheerleader every day. Sigh

Welp, it seems like Denise missed the cocktail attire memo. She is straight wearing jeans. It is true that she looks better than most of the women in their sequin ensembles, but just a little jazz would be nice, Denise! Rinna, and her ratty fake hair, has an announcement to make during Erika’s event. She has decided to take everyone on a week-long trip to Rome, Italy. Sutton looks like she won the lottery. She is just happy that she is included with the “cool” girls.

Later, Denise attempts to make nice with Erika and address the mom-shaming that’s been happening. Too bad Erika shuts down the convo before it can really even begin. She tells Denise, “When Aaron gets involved, it becomes something else.” Erika does not appreciate the way Denise dodges the problem and has zero interest in clearing the air. Instead, she prefers Denise to kiss her booty. You can tell Denise was confused about what happened as she walked away.

Side note: Did you guys know Dorit can speak Italian?! Lord knows she will tell you. Over and over and over again.

The next day, Garcelle meets up with Sutton for a bite and they discuss how Garcelle is hardly ever around. Sutton cannot wrap her mind around Garcelle’s work schedule, but Garcelle explains as a single mom, she has to work hard. I gotta give it to Garcelle for asking what everyone else is thinking: Just how DID Sutton get all this money? Sutton gets taken aback by it, but she opens up a bit…but only a bit. We find out that Sutton knew her ex-husband since she was 13 years old and it’s nice to see the girls bonding over Southern slang.

Oh man…when two worlds collide. Over at Rinna’s house, in walks Alexia, Kyle’s daughter. They have hired Alexia as their real estate agent to find Amelia her perfect new place. The laundry list of sh*t Amelia is asking for is laughable. Cabanas? A pretty refrigerator? WTF is a pretty refrigerator? Rinna looks borderline embarrassed over Amelia’s demands, but she will be def chip in $1,000 a month for her rent. EYE ROLL.

It’s packing time! Between the assistants and the wardrobes, it is clear that the crew is going big on this trip. I mean, we are talking about bringing WIGS, ya’ll. Hold up: Erika’s dog looks better in the wig than she ever will, amiright?

Way to go, Kyle. You dropped the ball on Teddi’s baby shower, huh? She has just been soooo busy planning her gala and packing and being all up in everyone’s business, but today Teddi comes over to prep for this shower once and for all. Kim busts in during the planning and drops off some dresses she borrowed from Kyle. She lets the girls know that Brandi is waiting outside in the car. Hmm…

When Kyle invites a mic-ready Brandi into her house, I can’t help but think if this isn’t a Denise set-up I don’t know what is… How are we supposed to believe that suddenly Kyle and Brandi are cool now?! They very clearly rekindled their “relationship” to take down Denise.

Brandi begins spilling THE tea. She starts by saying how much Denise apparently hates Teddi and explains that Denise “feels like she can tell me things cuz she has something on me.” It’s weird to see Brandi so nervous. Evidently, Brandi believed that Aaron and Denise have an *understanding* where Denise can be with other women.

Brandi divulges that she made out and hooked up with Denise a few months ago. Interesting how Denise made Brandi promise she would never tell Aaron about their alleged hook-up, yet here Brandi is, spilling the beans to Kyle “Big-Mouth” Richards and Teddi “I-Will-Tell-Secrets-And-Pretend-I-Didn’t” Mellencamp.

Brandi gets really emotional and even cries a bit? . Brandi claims she is really upset at being forced into “the other woman” role, reminding us that her ex-husband Eddie’s affair with LeeAnne is what broke up her marriage.

Sooo, Brandi thought that Aaron was okay with all of it? Evidently, Denise is terrified of Aaron finding out this news, but riddle me this, how come Denise showed no awkwardness whatsoever when Brandi was talking about being a throuple with Aaron at Kyle’s party? Is she just THAT good of an actress?

Kyle is like, drooling, over this bombshell and she can’t even hide her awe. I love it when she says Brandi is a lot of things but NOT a liar… however, when Brandi claimed Mauricio was cheating on Kyle a few seasons back, THEN Brandi was a liar????

Mere hours later, on their way through the Italian scenery, the bombshell gets dropped. What did I tell ya? Teddi could hardly wait and keep her mouth shut. I guess she’s been quiet the whole season and just saved it all up for this. So now Rinna knows about the hook-up and poor Denise has no idea what’s been going on behind her back.  These women are so CALCULATED.