Below Deck Mediterranean Recap: Tom Unravels and Captain Sandy Orders Malia To Stay Out of the Galley 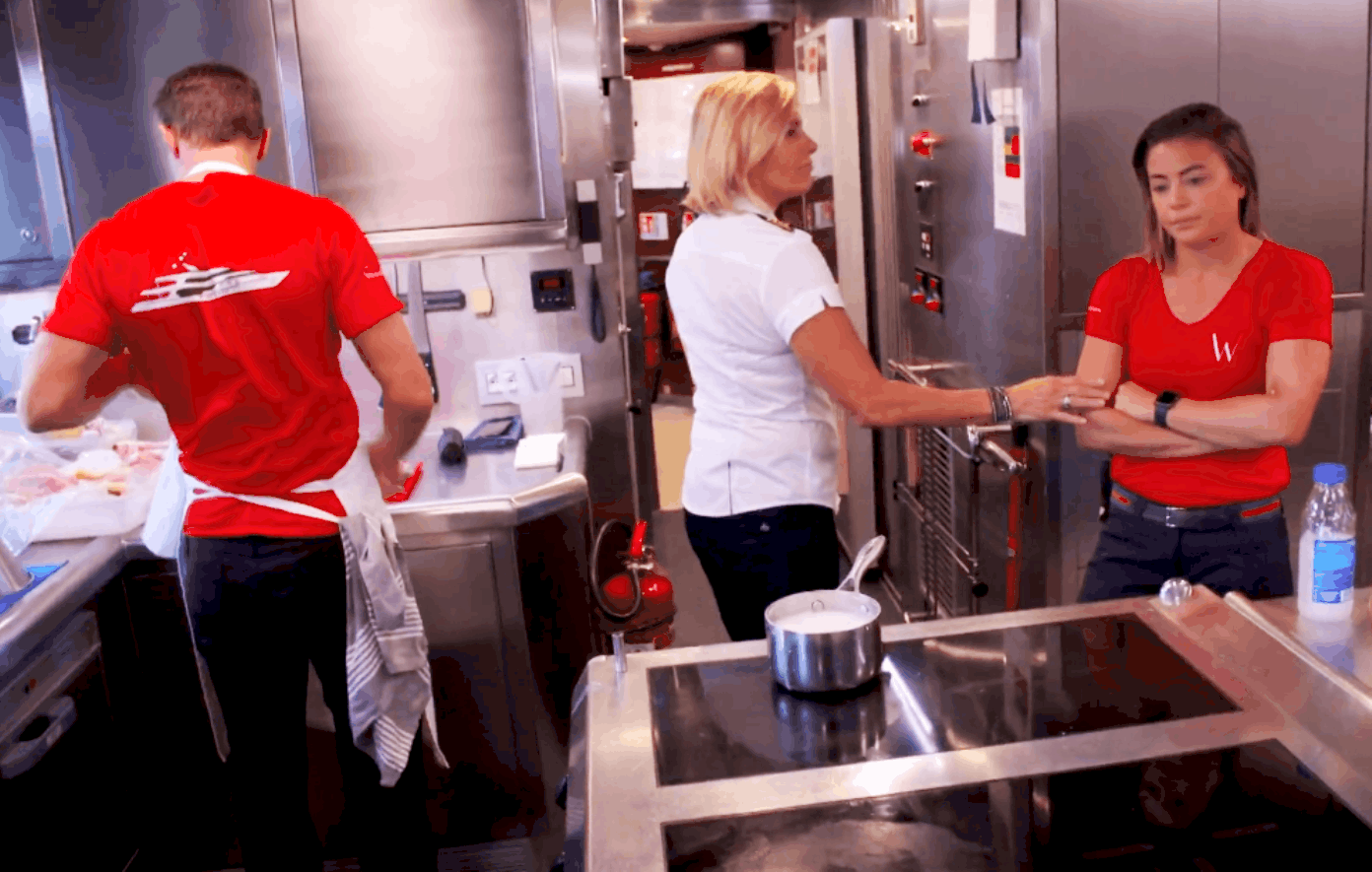 One romance grows, one romance burns out, and the chef’s fuse grows exceedingly shorter by the minute on this episode of Below Deck Mediterranean.

Nope, it wasn’t a bad dream. Tom is still actually being an absolute d*ck to Aesha, all because he got interrupted from his afternoon delight with Malia. Aesha knows exactly what she is doing when she motions for Bugsy to follow her into the cabin. She cries to Bugs and Bugs talks her off the ledge; evidently, if you are “caught up” in your work, you’re allowed to be a jerk to the stews?

Of course Malia comes to check in on her boo. Tom shares that he is p*ssed about the whole cucumber debacle, but that he plans on apologizing to Aesha. Bugsy chooses to keep “the chef happy” instead of calling him out on his sh*tty behavior. Typical.

Especially typical that Captain Sandy lurks in the galley. She is beyond annoyed that Tom is giving her the silent treatment for waking him up to cut cukes, but it’s about time everyone sees Tom for who he really is: an impatient, rude guy who thinks the world owes him a favor.

Interesting that the “nauti party” theme night aligns perfectly with the fact that the crew must don speedos. In case you forgot, the crew bet that they would win the ultimate frisbee game against the guests. Not only did they lose, but they also lost their dignity. See: blue speedos with a stuffed crotch over their uniforms. Talk about losing it all.

Malia pops into the galley, her home away from home, and reminds Tom, “Sous chef at your service.” Malia claims that this whole Tom business is a nightmare, which explains why she is kissing his a*s and doing his b*tch work in the kitchen. I’m confused because the last time I checked, no one forced Tom into this position. He’s a big boy (notice I didn’t say man) — he can make his own choices but cannot make a meal without a sous chef. Boom.

Glad that the primary charter guest held dinner up for nearly an hour only to come out dressed in his 1990s ensemble. What, is he channeling Zach Morris?! Naturally, Malia does not participate in the speedo bet and I love it when the guests call her out for her lack of leadership. Happy to see that she got embarrassed into not being a team player and pulls a pair on for the guests. Speaking of guests, they are very pleased with the meal. I guess everything is easier when you have a minion working under you.

Upon seeing Rob and Jessica humping on the deck in the guests’ view, Malia tells them, “This isn’t a Sandal’s couples retreat.” Listen, Malia is not the picture of perfection, but she does have a point. Jessica, you cannot complain about being tired and then run off on your break to bump and grind with Rob out in the open. Their professionalism has reached a new low. I mean you can’t go at it like that — at least wait till you’re in your cabin like Malia and Tom do. But just hope that no one wants any cucumbers — that could interrupt the mood FOR SURE.

The next morning, it’s drop off day. Things are terribly awkward between Tom and Sandy. And we are meeting Malia’s mom! The excitement just keeps coming. I wonder if her mom knows her daughter is dating a total jerk. Tom seems like he couldn’t care less that Malia’s mom is watching the boat get docked. In fact, I am not sure he cares about much except for his reputation. Tom certainly doesn’t care about giving a heartfelt apology to Aesha. Tom gave her the non-apology — you know, the one where you say the words “I’m sorry” but basically tell the other person how dumb they are for what they did.

In the meantime, Bugsy gives Rob and Jess the green light to stay in the guest cabin tonight (gag) — hey, at least they’ll be in PRIVATE this time. The boat pulls in perfectly and Malia’s mom is impressed. Whoa, can we talk about how Malia’s mom almost hugged Captain Sandy before hugging her own daughter?! Also, Sandy and Malia’s mom had dinner together before? Hmm…I smell favoritism.

As the crew says goodbye to the guests, they give hugs and await their (hopefully) hefty tip. But alas, instead of a tip, the crew gets dinner tickets to the primary’s home in Malibu?! Siiiiike…ever the trickster, the primary turns around and whips out a pretty bulky envelope.

Once the guests are well on their way, Malia’s mom hops onto the boat for a tour. She is very mom-like and is trying to make small talk with Tom when she spots him on his chef duty and yells out, “This is your kitchen, huh?” “It’s called a galley.” Oh, Tom. STFU. Just let Malia’s mom have a moment, please.

At the tip meeting, I love how Captain Sandy calls Tom out for his erratic behavior. She reminds Tom that he freaked out over a cucumber and it is incredible. He looks like an absolute lunatic as she addresses him and suggests that next time, Tom let SOMEONE know that he is taking a nap. That would be helpful, huh? You can tell that Tom is livid that she made him look bad in front of the crew, but it was necessary for him to understand he doesn’t walk on water.

Side note: Jess hasn’t had sex in two-ish years? Good thing she is dating Rob. Love how he just slipped in that he was in a documentary about tantric sex. Of course.

For the final charter, it’s an all-girls trip. The preference list is bananas and that should make for a fun time for the chef. It’s not like he can handle much more stress. Tom confides in Malia back in their bunk. He feels like he had a “scolding” from Captain Sandy. Like, grow up. Wonder if Malia is gonna tattle on him to the captain? I mean, her track record isn’t that great with secret-keeping.

While the crew is out celebrating their soon-to-be final charter, Jess and Rob are being lovey-dovey on the boat. They share a romantic dinner, the opposite of what’s happening with their crew. Over dinner, Bugsy claims that there is no sexual tension between her and Alex; however, it takes two to play tonsil hockey. Bugs is so mean to Alex and it is clear that she simply likes to play with his feelings. It is so awkward, but not as awkward as watching Malia and Tom literally play with each other’s tongues. So gross.

How cute is Alex acting like he thinks the reason Bugsy is literally RUNNING away from him is because she is scared to be in a real relationship? I really hate to break his heart, but I don’t think Bugsy feels anything for him. Sigh.

The next morning, the crew is down to business. Malia finds Captain Sandy to let her know she is going to name a lead deckhand…with only one charter left.  Um… That’s a little a*s backwards.

As the provisions for the next charter arrive on the boat, Tom begins to unravel. The fish is room temperature and instead of handling the situation like an adult, Tom calls for his right-hand woman, Malia. She runs to do his dirty work and fill the captain in on the situation. When Captain Sandy finds out about the delivery, Sandy wants to (rightfully) know, “Why isn’t Tom coming to me?” Touché, Sandy. EVENTUALLY, Tom finds the captain himself and vents about the fish and meat and he’s about to explode considering the guests are due to arrive in about an hour.

As his hissy fit erupts, Tom shrieks, “This looks bad on me again!” Tom running to Malia every time an issue arises is completely amateurish. He loses his temper on Captain Sandy over his BREAD and tells the captain, “Don’t try to humor me at the moment.” Captain Sandy calls for Malia to stay out of the galley. THANK. YOU. It’s about three charters too late for that. Malia tries to explain that Tom is gonna walk off the boat, but Captain Sandy isn’t scared. She even goes as far as saying let Tom walk! You know who wouldn’t behave like this? KIKO. #karma.