RHONY’s Elyse Slaine Leaks Texts From Sonja Morgan, Accuses Ramona Singer of Being a Backstabber and Trash-Talking Her Costars and “50 Best Friends” 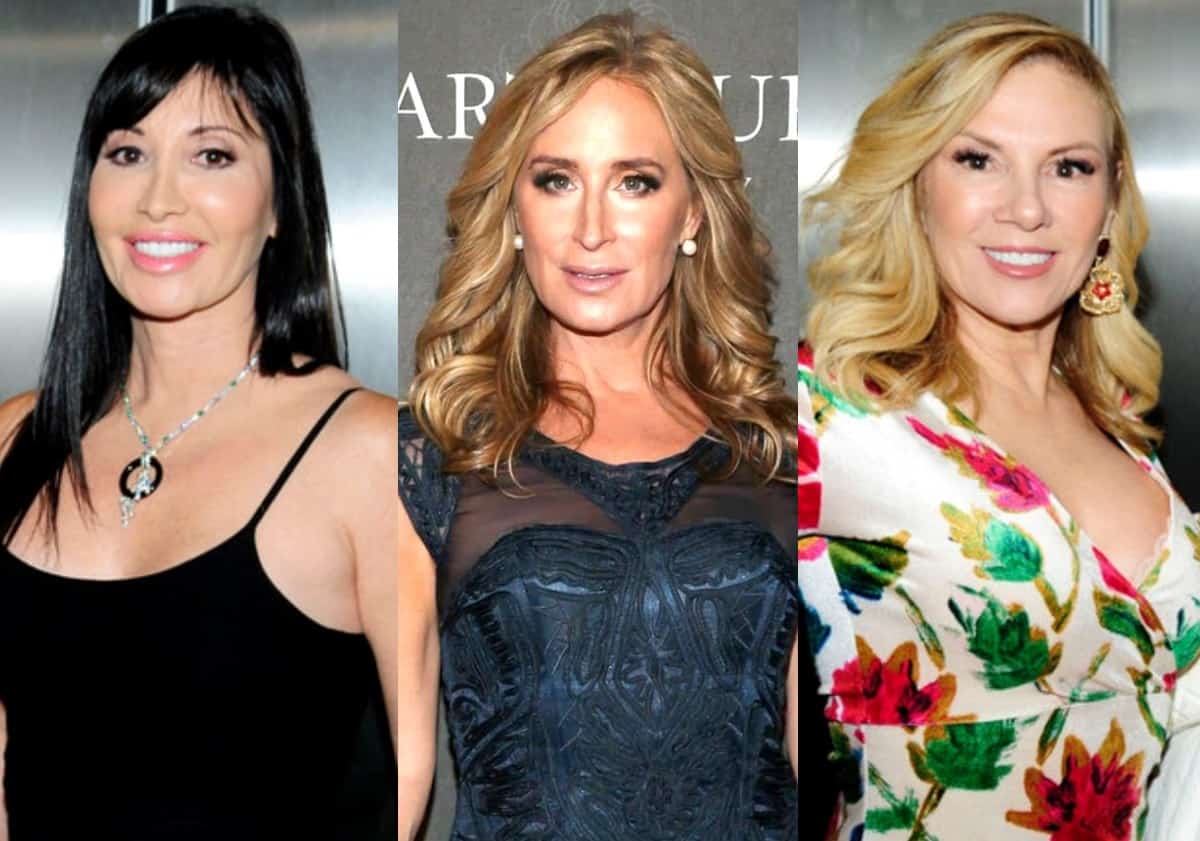 Elyse Slaine took aim at the Real Housewives of New York City cast on Twitter earlier this week after seeing a clip of them discussing her at the season 12 reunion.

Following a moment in which Sonja Morgan accused her of betraying Ramona Singer, who slammed her as a “black widow,” Elyse leaked a series of text messages from Sonja before accusing Ramona of being a backstabber who talks trash about her many friends, including Sonja and their co-star, Luann de Lesseps.

After watching the clip, Elyse accused Sonja of “singing a different tune” on the show than what she was saying to her off-camera as she shared messages sent to her by Sonja.

“I went to bat for you Elyse off camera and on. It’s hard to do the show,” Sonja wrote in the first leaked message.

“But the way Ramona treated you in that moment was really telling,” she added in the second. 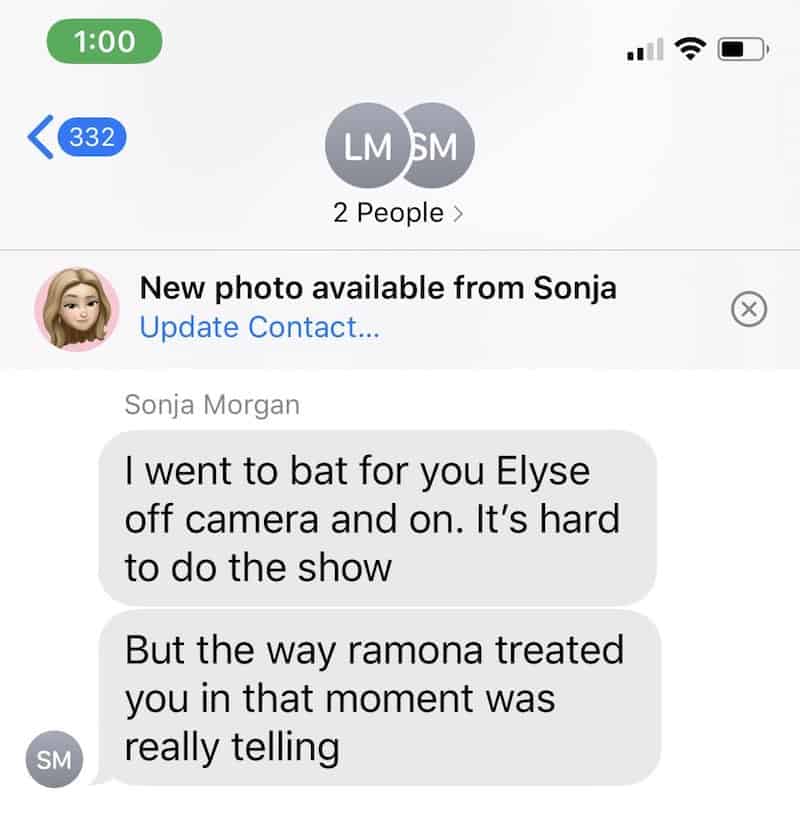 According to Elyse, Sonja and Luann likely wouldn’t have defended her at the RHONY reunion if they had a clue about what she was saying about them behind their backs.

“More lies by Ramona,” Elyse wrote. “If I take a page from ‘Mean Girls’ and released a Burn Book about everything Ramona said about each cast member, especially Sonja and Luann… they would never defend her again. I would include everything she has said about her ’50 best friends.'” 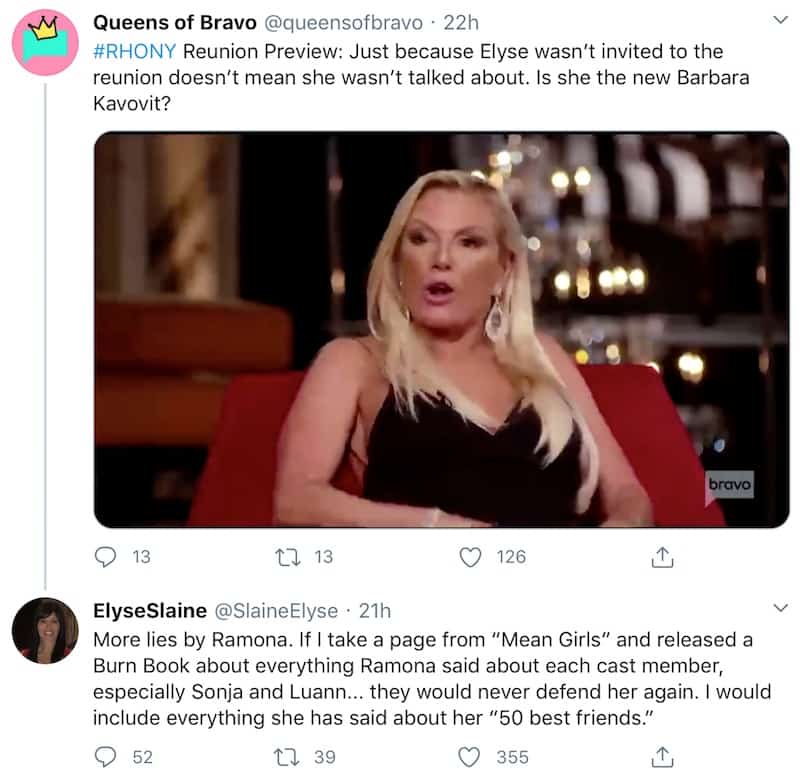 After seeing the post, Queen of Bravo on Twitter gave Elyse “props for not holding back.” However, as Elyse explained, she actually wasn’t holding back at all. Instead, she was simply grazing the surface of who Ramona “truly is.”

“I actually am holding back because a tell all would hurt a lot of people… yet prove how back stabbing she truly is,” Elyse replied. 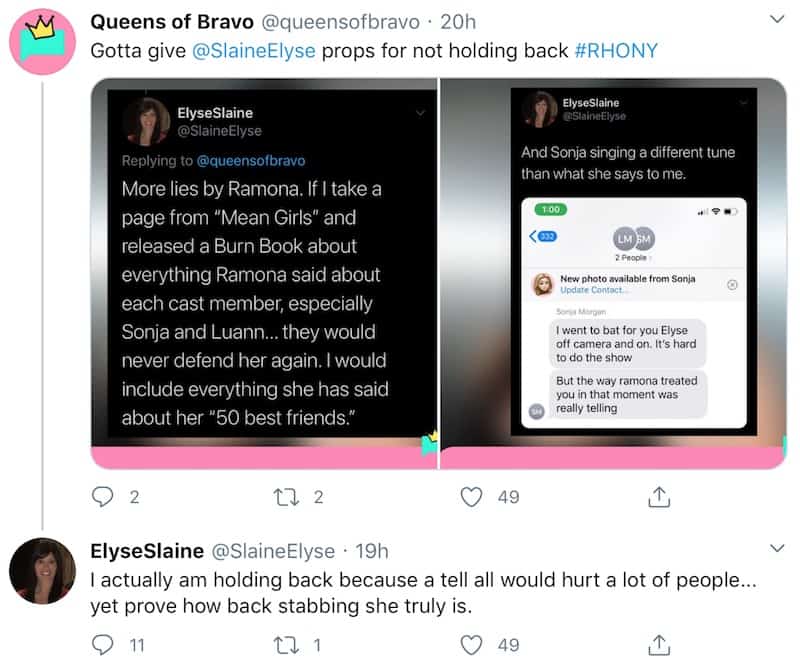 As for why she doesn’t tell all, Elyse told a fan that if she was completely honest about Ramona, innocent people would be hurt by her reveal.

The Real Housewives of New York City season 13 is believed to be in production currently.