Below Deck Mediterranean Recap: Tom Threatens to Walk Before Final Charter and Talks Back to Captain Sandy; Jess’s Jealousy Reaches a New Level 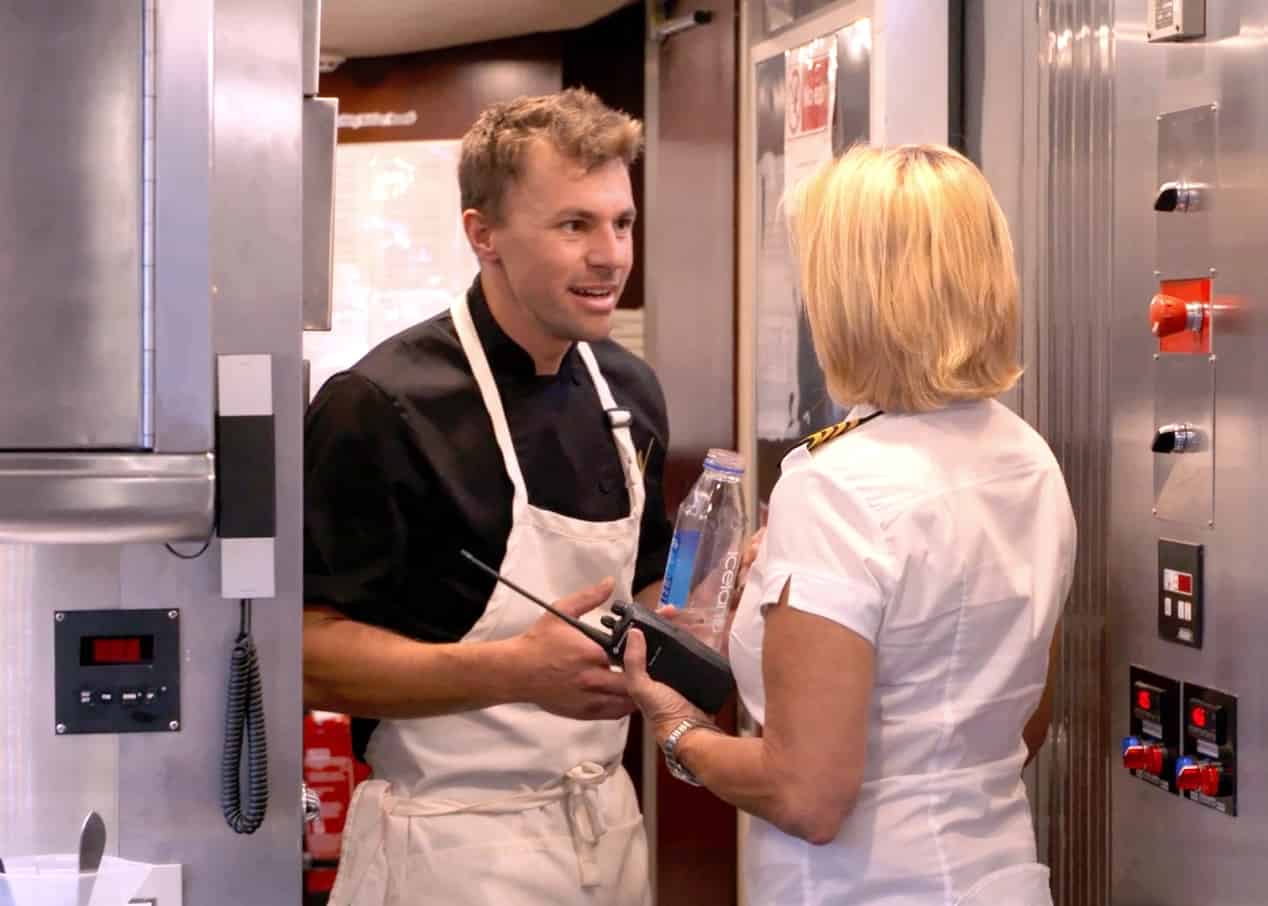 Someone needs to teach the definition of respect to the chef. Based on his behavior this episode of Below Deck Mediterranean, it is clear that karma is rearing its ugly head.

With only 1.5 hours left before the charter arrives, Captain Sandy puts her foot down and demands Malia stay out of the galley. Tom is seriously throwing an all-out hissy fit due to the mix-up in the provisions.

Tom screams, “I just want some f*cking respect from somebody.” He holds a pity party for himself and essentially begs Malia for a pep talk all while worrying solely about his “f*cking reputation.” WE GET IT. How many times can this guy say that?! Also, explain how behaving this way is doing ANYTHING positive for that reputation of yours, Tom… All I know is, thank goodness it’s the last charter, amiright? Tom threatens in his confessional that he would rather walk off the boat than serve anything that wasn’t in his original plan. Don’t threaten us with a good time.

Speaking of a good time, let’s discuss Aesha’s flirtation with Rob. It is hilarious watching Jessica cringe with every giggle Aesha lets out.

“You are my pride and joy. I’m gonna start there.” EW. Captain Sandy calls Malia in for a discussion, explaining that she doesn’t want Malia to f*ck up just because her “partner in life” is going through a rocky patch. Let’s see if Malia can remove herself from the galley as per the captain’s directives.

Wow. The way Tom talks to Captain Sandy is completely unacceptable. He lashes out at her regarding the provisional mix-up. She refuses to take his lip and Sandy goes as far as telling the rest of the crew that Tom can just straight leave. Tom is SUCH a diva. It’s about time Captain Sandy saw his true colors shine through. You know who would never behave like that? KIKO.

During the meeting that Captain Sandy calls, she discusses the provisions issue and explains that she is on Tom’s side, but she refuses to be spoken to like that. She actually becomes EMOTIONAL, and God bless Aesha during the team talk — the girl looks like she is about to cry. Versus Tom…he looks like he got verbally assaulted. He is unreal when he cannot fathom why Captain Sandy feels disrespected. Talking back to the BOSS certainly doesn’t warrant a slap on the wrist, right, Tom?

It’s the girls’ club for this final charter. It’s basically like the Real Housewives have decided to come sail away for three days. Little do they know that the chef is throwing a tantrum and that the chief bosun basically just wants to be a sous chef.

Malia names Alex as the lead deckhand, mainly because she wants him to do her work while she is doing Tom’s b*tch work. When Tom runs into another provisions speedbump, of course he brings Malia into the freezer to complain, so Bugsy and Aesha hold down the fort and flip the stovetop lunch. Tom is freaking out, yet again(!!!!) and goes as far as saying, “I don’t care about the guests!” Yup. Seems like *THIS* guy realllllllly cares about that reputation, huh? Here’s an idea, Tom: take your issues to the captain!

Captain Sandy totally feels as if everyone is going behind her back to try and baby Tom.  She sits Bugsy down and attempts to have Bugs focus on the fact that Tom DOES have provisions…he just has to overcome adversity.

During lunch service, Tom asks for Malia’s help…and she stays. Aesha can’t wrap her mind around how Malia can see Tom as attractive based solely on his behavior. Malia chases him to their bunk as Tom throws in his towel — literally. Bugsy has no idea that Tom is LOSING his sh*t, but it appears as though the guests are really digging his “sh*t meal.”

In the meantime, the water toys are out (no thanks to Malia) and one of the guests capsizes from her jet ski. Malia sends Rob to rescue her, they get to chatting, and basically, Rob is now in love…again. In the midst of their flirtation out in the water, the guest gets stung, so Rob needs to tend to her injury. While applying vinegar to the sting, Rob tells her, “I’m not used to being seen.” WHAT, ROB?! Doesn’t he know Jess is always lurking, always listening, and always seeing you? Things just don’t seem like they are gonna work out for Jess and Rob.

Even though dinner is set for 8:30, the time gets bumped up (thanks, Captain Sandy) because a few of the guests claim they are starving. Bugsy is terrified to tell Tom that the guests are already sitting at the table when he thinks he has 20 minutes to prep. This was a wise suggestion on Captain Sandy’s part, don’t you think? Create more drama and stress for the emotionally unstable chef!

As the plates begin rolling out to the guests, Tom calls for Malia to help out in…the galley…AGAIN. Didn’t Captain Sandy say stay away?? Everyone feels the tension, except the guests — you know, the people Tom doesn’t care about.  They are happy with the meal even though Tom claims the whole dinner was garbage.

So here comes the guest drama. This is what happens when too many women are stuck together with oodles of drinks. One of the guests in particular is acting a bit extra and it is clear that the women’s issues may boil over. To add to it all, Rob keeps popping in to hang with the guests and manages to repeat that he is a model once again, in case they forgot it the last time. #onetrickpony.

The next morning hopefully brings a new attitude for all on board. Welp, can’t say Jess has resolved her jealousy issue overnight. She is livid to hear that Rob and Aesha will be going ashore with the guests because she feels like Aesha is Miss Steal Your Man.

Someone should remind Jess that she is the third stew, and sometimes, she actually has to do work. Bugsy and Aesha find her work ethic borderline unbelievable, but at least with Rob going ashore, she might be able to get some sh*t done. Rob comes to find Jess and reminds her not to be jealous. I don’t think he has to worry about Aesha jumping his bones…she claims he is too angular, LOL.

But when Aesha grabs Rob’s a*s during a group photo with the guests, Jess’s blood boils. She stalks Rob before he hops on the boat and threatens to beat Aesha up if she ever touches him again. Honestly, not sure if Aesha is doing this intentionally, as it appears this is simply her personality.  However, Jess looks like she would seriously rearrange Aesha’s face if her hand accidentally wanders anywhere near Rob ever again… So…is their Bali trip still on now??