RHOC Recap: Gina Accuses Sean of Sending Her a “Creepy” Text as Braunwyn Struggles With Sobriety 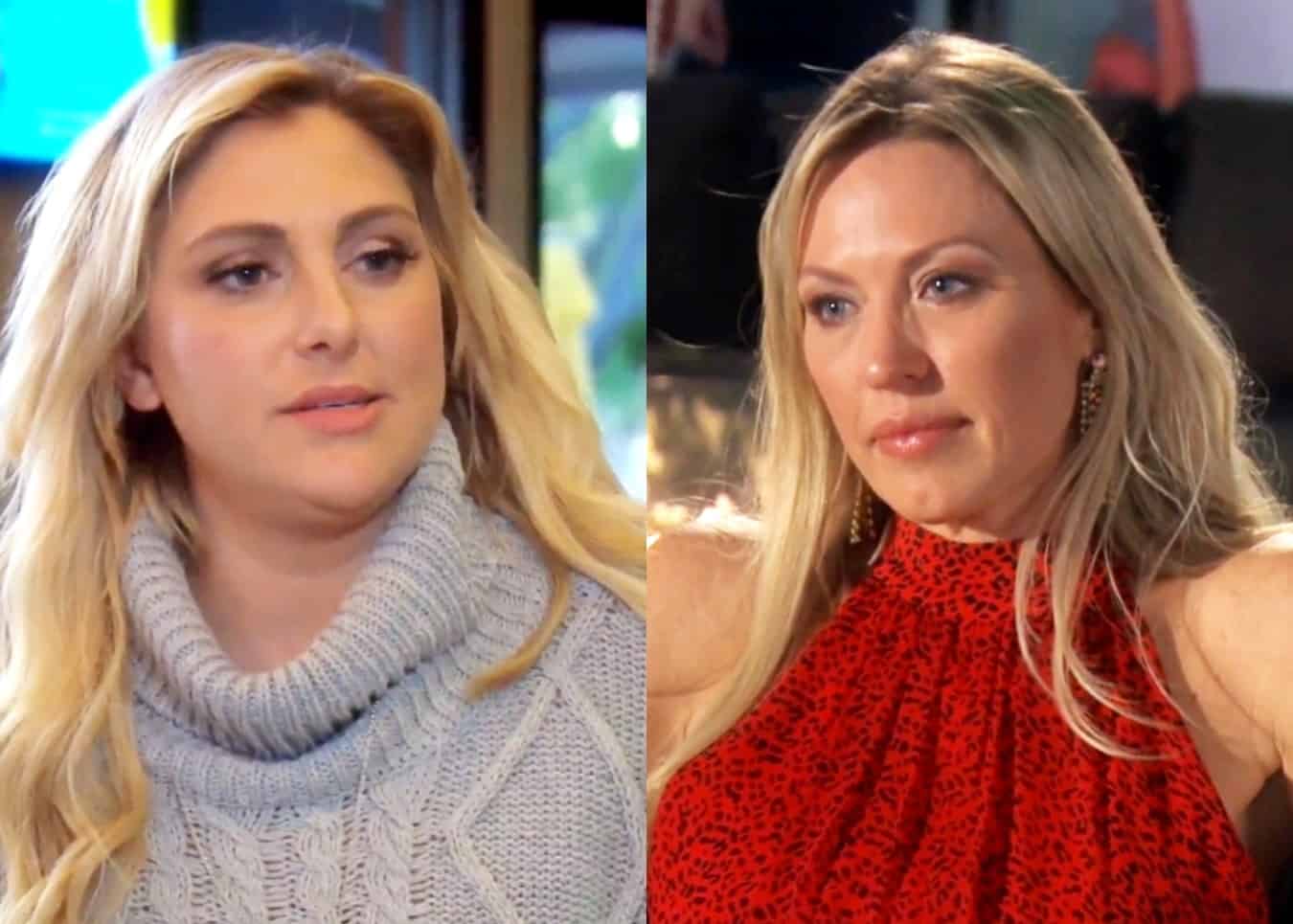 Some secrets are just too heavy to hold onto and some gossip is just too good not to share, especially after having tequila. Find out what happens when friends aren’t quite who you think they are on this episode of the Real Housewives of Orange County as Gina also shares a screenshot of a “creepy” text she received from Braunwyn’s husband Sean.

Midway through the episode, Besties Emily and Gina meet up for some Mexican. (Maybe they should invite Elizabeth to try out the food! Ha!) They have moved on from their bickering in the past and now just enjoy each other’s company and a couple of thousand drinks. Whoa, whoa, whoa. How did this girls’ dinner turn into shot-taking and sh*t talking? (Side note: How are these two getting home? Here’s to hoping Gina learned her lesson and calls herself an Uber…)

After a few hundred shots, it comes out that Braunwyn’s talking sh*t about Gina and her tiny condo. Heyo — new storyline! Gina explains that she isn’t even FRIENDS with Braunwyn, so therefore, she is confused about why Braunwyn would even have Gina’s name in her mouth.

Regarding Braunwyn’s 8,000 square foot home, Gina believes that Braunwyn is “completely full of sh*t.” Gina and Emily can’t seem to understand where Braunwyn’s money comes from. Gina hits the nail on the head by saying she can’t imagine anyone ever sleeping with Sean with those necklaces he always dons. LOL. As the booze really kicks in, Gina demands Emily call Braunwyn so she can tackle the issue head-on.

“Fun” Emily is game and calls Braunwyn. Gina wastes no time and dives right in as soon as Braunwyn answers. She insists on knowing why Braunwyn is talking smack. To that, Braunwyn responds, “You know why!” Braunwyn is p*ssed that Gina said some stuff about her husband, Sean. Braunwyn orders Gina to meet with her so they can discuss the issues at hand in person. Then, Braunwyn hangs up on Gina.

What is Braunwyn hinting at? WELL. Evidently, the night of Vicki’s birthday party, Gina got a text from Sean, complete with winky faces, after he helped Gina find an Uber to take home. GROSS.

The text read: “Hi Gina, just checking in all is OK 🙂 braunwyn is asleep, but I got her to the condo first;) Anyway, have a good night, and it was great to spend some time with you :)… Oh this is Sean,’ probably should have started with that.” 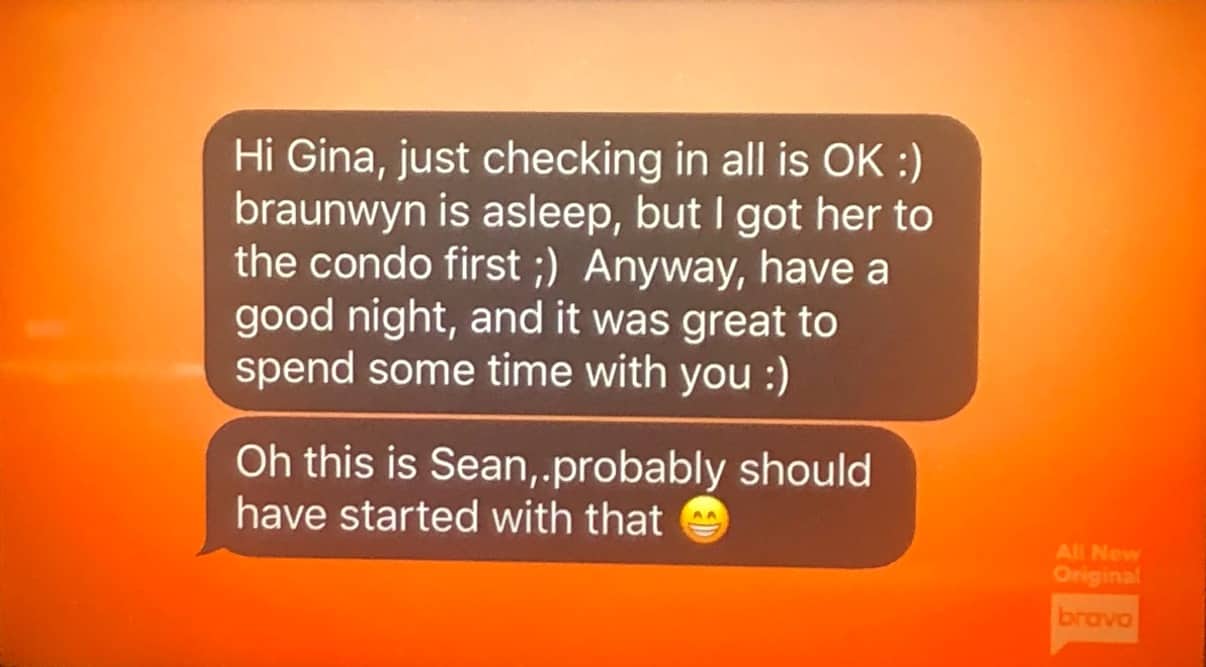 Because she is not done laying into Braunwyn and because tequila makes you brave, Gina calls Braunwyn back. Braunwyn shrieks, “Tamra told me some stuff…” (Ah, Tamra just can’t stay away, can she?). She also says, “Don’t hide behind Emily’s name. Call from your own damn phone.” To be fair, it’s kinda lousy that Emily knows that Braunwyn is having a rough time yet allows Gina to call Braunwyn and egg on the drama. Some things never change with these ladies, huh?

Earlier in the episode, we see Kelly is moving into Shannon‘s neighborhood and their rocky relationship is still a bit all over the place. Say hello to your new neighbor, Shannon! Emily goes over to Kelly’s place to help her pack (or eat cheese while sitting on the floor?) and the women discuss how Shannon will most likely change now that she is a “solo amiga!” Don’t worry — Kelly didn’t miss an opportunity to mention her sex life with Rick Leventhal. TMI.

Elizabeth’s family is in town. She reminds us all that she was “very, very poor” and that she only escaped that lifestyle by marrying rich. Shocker. I am confused by her low-rise sweats and her boyfriend, Jimmy, who she does not sleep with. Jimmy is younger, in tech, and is Mexican. Elizabeth VARGAS states that she is a “Mexican in training” and that she never really was able to embrace her ethnicity prior to meeting Jimmy. Hopefully, he will teach her the difference between chimichangas and tamales…

It’s a Valentine’s Day date night for Braunwyn and her hubby, Sean, except this year, they are celebrating in a pretty tame way. Braunwyn reminds her husband that this sober life is really hard.  After all, according to Braunwyn, “I’ve been pregnant, nursing, or drunk for 25 years.” Wow. She becomes emotional after hearing her husband order a drink and states that she should never allow herself to slip, despite Sean’s “sober” method.

Braunwyn goes on to state, “I haven’t had sex since I got sober. We haven’t held hands, I think.” Ooph. Sean should be trying extra hard right now. Braunwyn needs all the support! Sean reminds her that they have so much love in their lives…yeah, approximately 96 kids worth, but it’s just not the same.

Real for Real cuisine is launching for real now. Shannon explains that she is using her divorce money for her future, so it ONLY MAKES SENSE that she sits around creating prepared meals for QVC viewers. DUH. John, Shannon’s boyfriend, supports her fully. Plus it’s nice that his daughter, Juliet, works for the company. It’s a family affair!

It appears as though Kelly and her mom are on good terms again. Things are looking up. Kelly discusses her daughter, Jolie, with her mom and drinks wine in her walk-in closet. So…packing’s going GREAT!

Elizabeth and Braunwyn meet up at a kids’ store and try to find a gift for Emily’s daughter’s upcoming birthday party. Before they can even peruse the racks, Braunwyn word vomits the newest drama to Elizabeth. “Gina did some shady stuff to my husband.” Elizabeth is in awe of the situation but goes on to talk about her family history (most awkward transition ever).

Elizabeth shares that she is very close with her mother but that “she went through a lot with her alcoholic dad.” Braunwyn feels like she is getting suffocated, especially when Elizabeth makes a joke about all the alcoholics in both of their lives.  You can tell Braunwyn wants to share her sobriety but is not quite ready to open up about it.

Two hours later, Braunwyn breaks down to Sean. She admits that she thought she was stronger than this. Sobriety is HARD, especially when there’s no baby OR finish line to greet you at the end of nine months. Sean does his best to give Braunwyn a pep talk and Braunwyn goes on her way to a dinner with Shannon. Right before she leaves, she finds out that Mama Deb has done it again — she let Tamra know Braunwyn’s biggest secret!

Braunwyn scoops Shannon up in the family minivan. You can tell that Braunwyn is really not herself and Shannon senses this right off the bat. Braunwyn explains that Mama Deb called Tamra and spilled the beans about something important. Upon hearing this, coupled with the fact that Braunwyn says she isn’t drinking, Shannon believes that Braunwyn is pregnant until she realizes that is certainly not the case. Braunwyn comes right out with it: “I’m an alcoholic I think.” She begins divulging the whole ordeal to Shannon about Mama Deb. It turns out that Deb wanted to blackmail her very own daughter with her drinking problem. Shannon is super supportive and even SHE does not order a drink when they sit down for dinner.

It’s the day of Emily’s daughter’s cat birthday party — a totally normal theme for a seven-year-old. Nothing is more awkward than Elizabeth’s ENTIRE FAMILY rolling up to the kid’s party. Braunwyn decides to show up to the party even though Gina, her current nemesis, will also be in attendance. I guess Emily will be this season’s sh*t stirrer since the ghost of Tamra is only coming back to haunt here and there.

Before Gina arrives, Emily pulls Braunwyn aside and wants to be sure the ladies are on their best behavior at the party. Braunwyn throws Shannon RIGHT under the bus by saying she, too, was making fun of Gina’s new place. Emily reminds Braunwyn how rough Gina’s past year was and that it is messed up that Shannon would also go low like that. All I know is that Braunwyn better tread lightly dragging Shannon into this. She just confided in Shannon about her new sobriety. If Shannon finds out about this, she could be spreading Braunwyn’s secret around faster than Mama Deb.

Gina arrives solo as it’s not her weekend with the kids. Gina and Elizabeth meet for the first time and they discuss liposuction. So OC of them. When Gina sees Braunwyn and Sean, the tension gets thick.

Somehow, in the midst of her own child’s party, Emily finds a second to let Gina know about the newest plot twist: According to Braunwyn, Shannon called Gina’s new place “sad and depressing.” Before Braunwyn makes an odd-timing exit, she asks Gina if they will be meeting to discuss the issues. Gina has a hard time stomaching Braunwyn, but the air must be cleared…