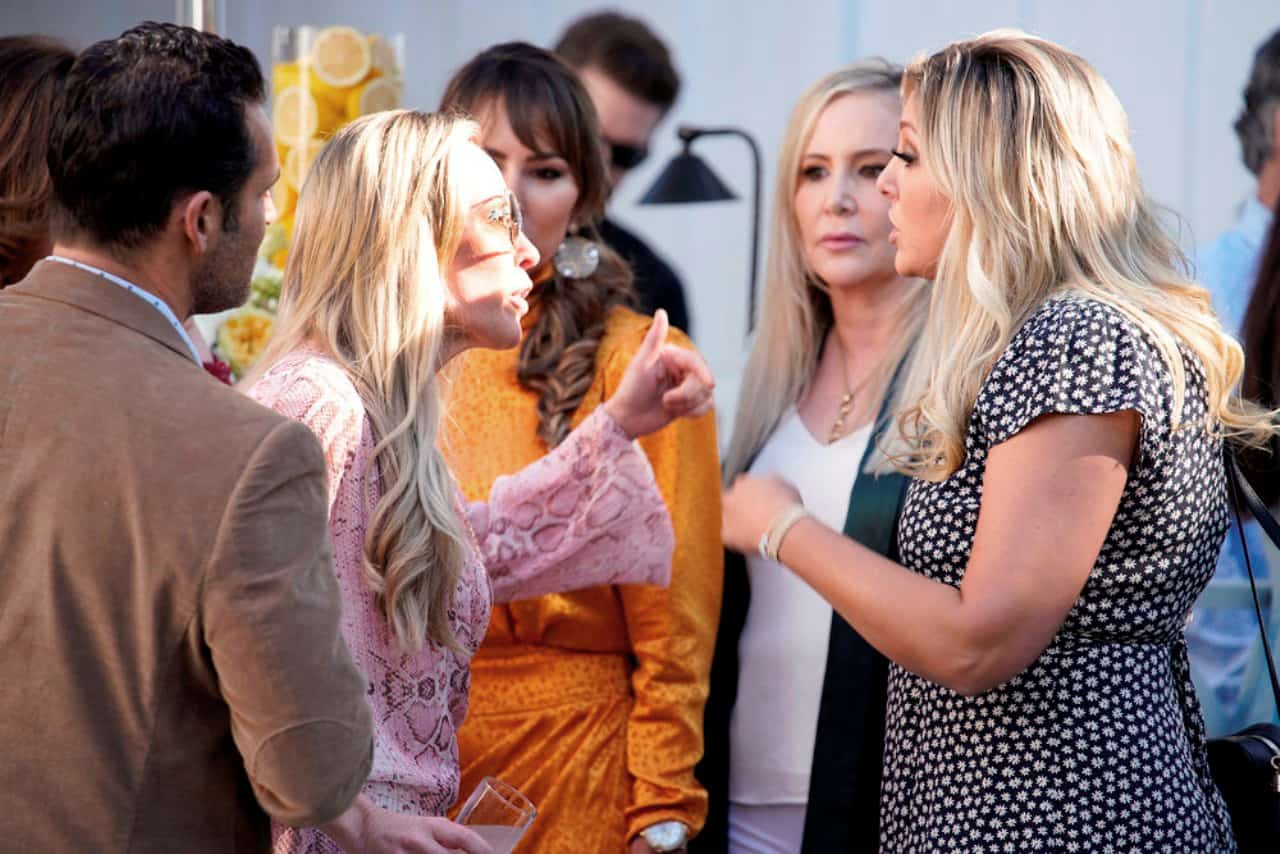 Who to believe and who to trust? The ladies pick sides and then go hard on this episode of the Real Housewives of Orange County.

Shannon’s prepping for her housewarming and is overly concerned about coming up with a lemon shot for her lemon shot glasses and the lemon leggings she ordered to tie together the “Let’s Get Real” theme. I am exhausted just hearing about her going on and on about it. Her biggest worry, though, is that Kelly asked to bring Emily as her plus one to the party. Because Emily is a bit “dismissive” toward her, Shannon is a bit perplexed and annoyed by this.

Elizabeth and Kelly meet up with Gina for dinner and drinks. The women begin talking about divorces, but Elizabeth is unable to talk about her divorce details due to the gag order. BORING. But — let’s be real — Kelly’s right. For a girl who “can’t talk about it,” Elizabeth sure does love to talk about it.

Gina finds out that Elizabeth and her boyfriend, Jimmy, do not have sex. Elizabeth claims that Jimmy is just being a gentleman and is waiting for the divorce to be finalized, but Kelly isn’t buying it. Speaking of not buying it, Gina is having a hard time figuring out her relationship with Shannon. On one hand, Gina thought Shannon was her friend. But on the other hand, it has been brought to Gina’s attention that Shannon has been talking smack about her new condo.

Gina was told that Shannon called her place “sad and depressing,” and Gina shares this information with Kelly and Elizabeth. Gina could give a sh*t less about the lemons Shannon dropped off. If she is being a mean girl behind Gina’s back, she can take those lemons back and use them for décor at her housewarming. Boom. Hilarious that they are all toasting to 2020 and how it’s gonna be the best year yet. Those poor ladies have NO idea.

Later, Braunwyn is whipping up dinner for her family of 27. Her daughter is home from school, and therefore, this is a cause for celebration. She is 28 days sober and describes herself as a “basket case.” I think she is a bit of a basket case before being sober, but I digress. Post dinner, Braunwyn’s busy kicking herself for being a bad mom during her drunken moments, but wait a minute — Braunwyn just leaves her kids jumping on a bed and calls out “goodnight?” THAT is wild. Thank God for nannies, amiright?

It’s a big day for Kelly! She gets the keys to her new RENTAL — a 4,500 square foot place. Although it is beautiful, Kelly deep sighs when she calls it “suburbia.” Quite funny how all of the women scoff at Gina BUYING a *tiny* place, but no one gives Kelly a hard time for renting. Kelly’s fiancé, Rick Leventhal, is going to be moving into this new house, which will certainly shake up the home dynamic. I mean, with Jolie around, will they be able to “get it on like Donkey Kong” as much?

Braunwyn (and her family minivan) scoop up Shannon. The women are on their way to Dr. Moon, Shannon’s healer. Because Braunwyn is feeling guilty, she spills that she threw Shannon under the bus. OF COURSE, Shannon denies saying that Gina’s house is “small and sad.” Shannon is p*ssed and asks Braunwyn to set the record straight.

Dr. and Mrs. Moon are SAVING this episode. Shannon is straight obsessed with him and has decided that Dr. Moon can help save Braunwyn from her addiction. Braunwyn is a good sport and allows Dr. Moon to stick needles in her ear or something, but when it’s Shannon’s turn, big mouth Shannon returns and she is hooting and hollering with a needle in her back. Shannon is mad and Dr. Moon can tell because he is a magician. DUH. The source of her anger is Braunwyn…because Braunwyn told the truth and made her look bad?

Emily and Shane are heading out to Shannon’s housewarming party. Although she wasn’t really invited, Emily is tagging along with Kelly because #screentime. Not really sure why Shane is coming with, but alas, the guy makes good television. NOT. I forget how much taller Emily is than Shane. And how much of a lump on a log he is. During the car ride with Kelly, Emily will not stop talking about Shannon talking smack about Gina’s house. Kelly, Emily, and even Shane call that Shannon will deny saying it because that’s what Shannon does best!

Meanwhile, Braunwyn is freaking out over how to “navigate” a party sober.  Looks like Dr. Moon didn’t really help her that much, huh? Braunwyn is desperately trying to be honest and strong, but all the girl wants is a cocktail. Plus, not all of the women are aware of her sobriety yet…that is, of course, if Mama Deb didn’t get to tell them yet…

Pretty hilarious that John and Shannon’s children are legit serving during Shannon’s party. We get to meet Grandpa Gene, Shannon’s dad, and his girlfriend, who is a young hottie. Amazing. Gina is the first to arrive (with her boyfriend Travis) and manages to talk to Shannon about the “sad and depressing” comment. Shannon claims that she would never call someone’s place sad (just “small” LOL), and to save herself, Shannon drags Braunwyn right back into the mess. Gina doesn’t believe that Shannon said that, especially because Shannon admits to being a renter whereas Gina OWNS her house. The women manage to smooth things over and I am pretty sure the tequila is helping. Now Braunwyn’s got the target on her back.

This is the weirdest party ever. Braunwyn gets set off immediately by all the alcohol talk and tasting. Emily knows that Shannon doesn’t really want her at this party and is dying to show Shannon that she can be fun, and Kelly greets Shannon’s dad like this: “Big d*ck Daddy from Cincinnati.” OMG, KELLY.

On top of Braunwyn’s sobriety breakdown, Shannon wants to discuss the putting words in her mouth debacle. The timing could not be any worse. Braunwyn is on the brink of an episode, but Shannon is not reading this. Shannon denies having ever called Gina’s house “sad and depressing” and Braunwyn reminds Shannon that she was sober during the conversation whereas Shannon was not. ZING.

Shannon is P*SSED and is just used to people agreeing with her, especially at her own party. Braunwyn claims that she has been sober 30 days, so she remembers exactly what happened. To that Shannon retorts, “You’re getting real manipulative now,” and she blurts out, “Don’t you dare accuse me of something I did.” HUH?! Shannon begins raising her voice to Braunwyn and yells, “This is my party — how dare you?” To be fair, Shannon asked to speak with Braunwyn, so I am unclear why Shannon feels disrespected…

Shannon runs right over to Gina and Emily to clear her name and Gina is thrilled to have Shannon back in her corner. Braunwyn is furious with Gina AND Shannon. She is doing her best to “own her truth” and she is completely unraveling because Shannon is living in a world of denial.

WHY IS SEAN GETTING INVOLVED WITH THE DRAMATICS? He decides that he should go talk to Gina WITH Braunwyn. And then things get ugly. Shannon tells Braunwyn, “You have a friend that is there for you, but you put words in my mouth,” and she reminds Sean that this is a celebration for *her*.

There are simultaneous fights occurring. Emily catches Braunwyn and calls her out when she says she hasn’t had time to make things better with Gina. “You have two nannies and you don’t work. You have the time!” Plus, Shannon is shrieking at Sean about bettering his relationship with Braunwyn.

Poor Elizabeth looks on with a mixture of fright and awe as Gina goes in hard. Braunwyn pretends that this whole ordeal has to do with character and Gina claps back with, “You’re gonna talk to me about character right now?”

When her anger erupts, Gina yells in Braunwyn’s face, “Go get wasted again!” Gina should tread lightly about this, as just a year ago, she got busted for a DUI. Gina reminds Braunwyn that she is always drunk and probably has no idea what is going on around her half the time. Even when Braunwyn screams she is 30 days sober, Gina doesn’t believe it and feels as though it doesn’t look like it. Ouch. To that, Braunwyn channels a classic Tamra move, and she throws her glass and runs off. To be continued…