RHOC Recap: Braunwyn Struggles With Allegations Against Husband and Sobriety; Plus Does Shannon Admit to calling Gina’s House “Small and Sad?” 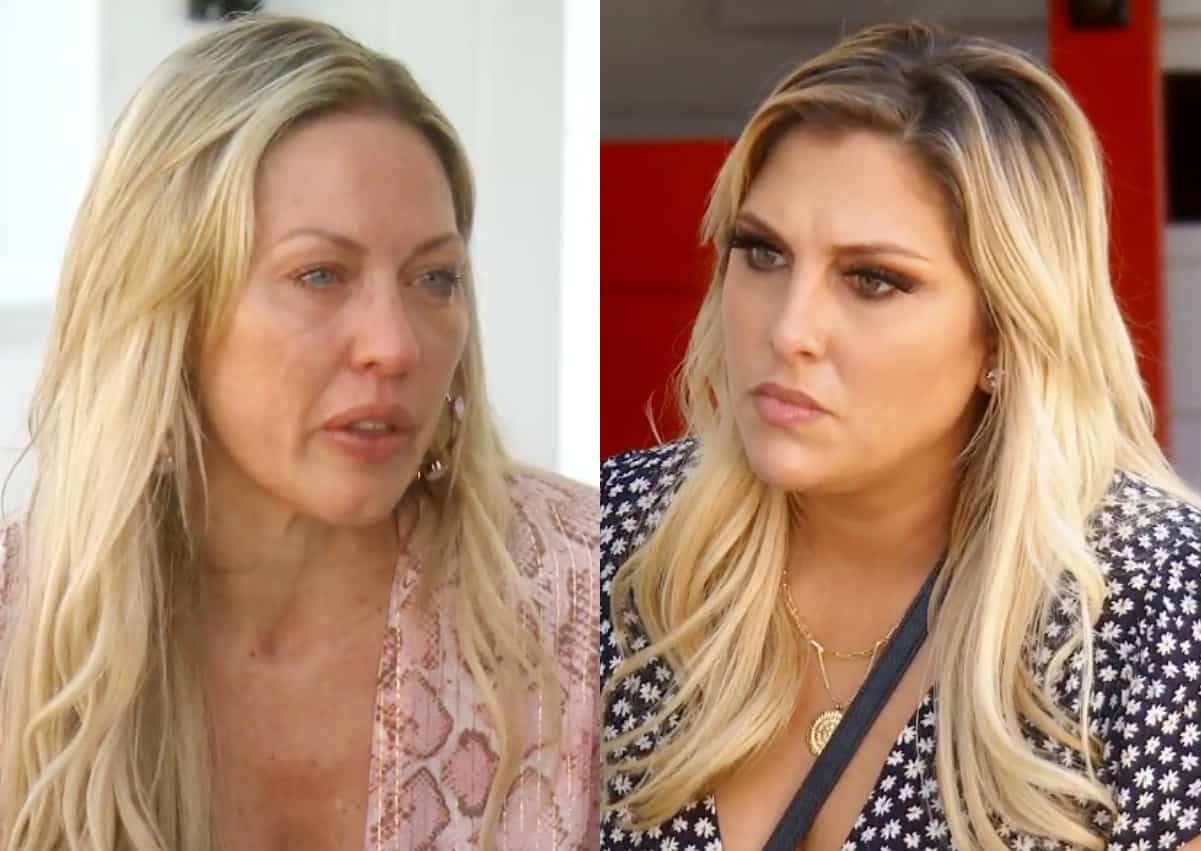 Really, what’s a Real Housewives of Orange County party without someone throwing a glass and running away? This time, it was sober Braunwyn who was pushed to the breaking point. After chucking a glass into Shannon’s pool, Braunwyn runs off, but luckily, her husband, Sean, hangs back to let Gina know her attack was “really not okay.”

It is unclear why Sean didn’t run to check on his wife — it’s like he enjoyed having a camera on him! Eventually, Sean gets summoned to go to his wife by the “Lemonade Boy” (aka Shannon’s boyfriend’s son), and instead of jumping to her defense, he lets Braunwyn know that “you let her [Gina] steamroll that conversation.”

Why is Sean acting like he is fighting this fight with Braunwyn? It never ends well for these ladies when the hubbies get involved. Someone better let Sean know and someone better go grab his immunity necklace — he could sure use one right about now.

Whoa, whoa, whoa. Why does Sean reappear in Shannon’s backyard out of nowhere to try and make things better? Sean legit pops back in and he asks Gina to come chat with Braunwyn one on one. Hilarious how Braunwyn is making Sean be her messenger. She is so mortified by her behavior and she’d rather have Sean be thrown to the wolves!

When Gina begrudgingly makes her way to Braunwyn, Braunwyn apologizes right off the bat and so does Gina…but let’s be real. Those apologies are BS. It begins to become a competition of who did who wrong worst. Gina is grossed out by Sean’s text to her and Braunwyn is grossed out that Gina TOLD people about said text. To be honest, any text from someone’s husband that involves a WINKY face is super weird so I can’t blame Gina for feeling the way that she does.

Gina is annoyed that Braunwyn is trying to “take away” Sean’s creepiness, but really, Gina should be beefing with Sean about this. Clearly, he has no problem inserting himself and getting involved in the fight, so Gina may as well officially bring him in the ring. Gina makes it clear she is not saying she is sorry for feeling the way that she does. Therefore, the situation is locked between her and Braunwyn. The chances of those two making up are slim.

Holy bossy Braunwyn. She beckons for Kelly and says, “You can come. Come!” Because she can’t even show her face to the whole party again after her outburst. Braunwyn cries to Kelly about how bad she wants to drink, and naturally, Kelly offers Braunwyn some tequila. Smart. Kelly learns that Braunwyn thinks Sean is an enabler, and when Braunwyn weeps that she is really sad, Kelly tells her to “shake it off.” I am sure this is the only time I would ever 100% agree with Kelly Dodd.

Upon finding out that Braunwyn is finally leaving Shannon’s party, Gina shows her excitement and retorts, “Sober, wasted…she’s a problem.” Shannon also agrees with this considering Braunwyn is bringing down the mood of the party BIG time.

On the short walk back to their house, Braunwyn explains to Sean what went down, and once home, she tells Rowan, her daughter, how horrible the party went. Pretty odd that Braunwyn is spilling all of this crap to her kid, but parenting is a tricky, individualized thing. Braunwyn can’t believe that she is feeling everything now that she is sober (wonder if she felt all of those childbirths??) and begins to unravel.

Back at the party, John introduces Shannon and they all toast “good friends and continued blessings.” That’s def a dig at Braunwyn! Speaking of, when Braunwyn says she doesn’t want to show her face ever again, you can tell that Sean is panicky. He is like, uhhh lady, we signed up for a show — ya gotta keep doing this, GF.

Life keeps moving at Shannon’s party. There’s a tour of her home, and naturally, everyone makes fun of the portrait in the gym. Glad to see Shannon got her groove back SO much that she is confident enough to mount a painting of herself next to the Peloton. As the women run around Shan’s house, Sean drives Braunwyn to an AA meeting. Unfortunately, Braunwyn’s fears are coming true — not many of the ladies like her sober!

Over at Kelly’s house the next day, she is wearing her lingerie in the kitchen with her boyfriend, Rick Leventhal. She talks about how excited she is to have him eventually move to the West Coast and into her new place. She also talks about their addiction to each other and…about their sex life. “It’s off the charts the way we bang.” GROSS. Kelly calls him a yes man, but I think he must just be blinded by the banging.

Why is Gina’s mom saved in her phone with first and last name? Gina shares that there has been a family court date set with Matt. She also lets her mom know that Matt has a girlfriend who she actually weirdly likes! When Matt calls, Gina decides to extend an olive branch and invite him and his girlfriend to their daughter’s birthday party. Big moves!

New pals Kelly and Elizabeth head out for some retail therapy. Because Elizabeth’s divorce is impending, she is stressed out and so looking forward to getting it all settled. The ladies talk about Gina and Braunwyn and essentially try to reasonably pick sides. Elizabeth seems like a stand up kinda friend, offering to go to AA with Braunwyn, whereas Kelly would never be caught dead doing that. Sounds about right.

Loving how Emily is pretending like Gina’s house is totally fine. And not small. And not sad. And not messy. Also loving how excited Emily is getting included on a Shannon text. She is legit thrilled to be a part of this text chain. Pathetic. While Gina attempts to do SOMETHING with her crazy hair and find her makeup in the mess of her vanity, she dishes about Braunwyn. Duh.

Gina explains, “The reason Braunwyn has two nannies is because she was drunk.” Emily calls the nannies Braunwyn’s “alcohol support team” (ouch) and Gina shares that her dad was a functioning alcoholic who is now nine years sober, so therefore, she feels like she is a pro with this topic.

Gina DOES accept an invitation from Braunwyn to go to an AA meeting with her and then for coffee afterward. And although this is a big move from Gina, I am having a hard time taking Gina seriously with those braids. As they rifle through clothing racks, Emily shares that she believes although Shannon may have referred to Gina’s condo as “small,” she doubts she meant it maliciously. Spoken like a girl who has just been accepted into the “cool girls” group and is terrified of losing her newfound spot.

Braunwyn is having a vow renewal, ya’ll! It will be their 20-year renewal, and this time around, Braunwyn is hoping to do it sober…and to have Shannon there. She calls Shannon to let her know she wants to move forward because #ratings. Shannon is not fast to jump at the invitation. She is still annoyed Braunwyn allegedly put words into her mouth and that Braunwyn behaved like a hooligan at her party. Plus, it doesn’t help that Braunwyn called John’s kid “lemonade boy.”

Later, Kelly has Emily over. When Kelly takes a sip of Emily’s drink, she blurts out that she doesn’t have COVID and that, “I don’t understand why people are freaking out about this coronavirus.” LOL KELLY DODD. Emily and Kelly believe that Braunwyn is just over the top and using her alcohol abuse as a crutch. So messed up considering Emily acted super supportive toward Braunwyn when she first found out about Braunwyn’s struggles.

When Braunwyn calls Kelly, Kelly invites her over…but obvi Sean has to come with! WHY! And why for the love are Braunwyn and Sean riding a two-person bike? They come bearing a gift for Kelly’s new crib: a mezuzah since Kelly is joining the tribe with Rick. As Sean makes himself scarce, Braunwyn sits and chats with Kelly and Emily. They discuss how there needs to be a resolution between her and Gina before there can be one between Braunwyn and Shannon. BUT…that seems near impossible. Shannon is still hot over “Braunwyn’s agenda” and is p*ssed that Braunwyn is focused more on her saying mean comments than her own sobriety. Fighting words. And words that show this is far from over…