Home Below Deck Below Deck Recap: The Charter Guests Butt Heads At Dinner As James Offers a Striptease

Below Deck Recap: The Charter Guests Butt Heads At Dinner As James Offers a Striptease 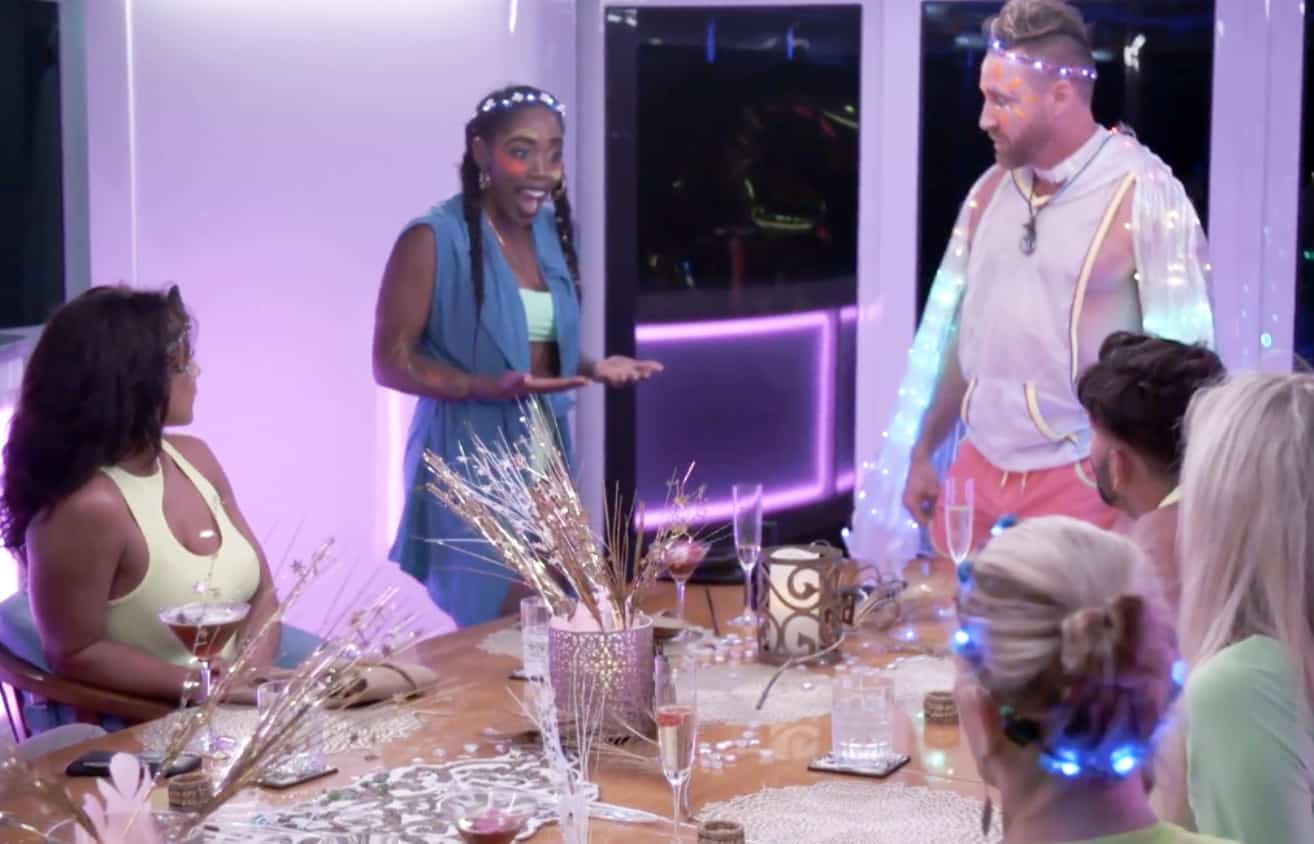 Antigua. Day one. And a crew member down. According to Captain Lee, it’s a “perfect storm.” Could things be any worse for this charter and is there hope to save it? Find out on this episode of Below Deck.

Captain Lee is calling in for a replacement deckhand and Eddie is stuck trying to school Shane on …everything. Izzy is still moving as slow as molasses and Charley, the primary charter guest, is still as extra as ever. I mean, who asks for an international tasting menu?! Poor Rachel is getting thrown a helluva challenge with this request. Captain Lee is stressing big time, so he calls a meeting in the wheelhouse. He better make it short otherwise Charley is gonna be popping behind the bar again, mixing his own drinks!

This international night theme is bananas. On top of trying to create a menu full of everyone’s dietary restrictions (gluten-free-vegan-friendly?), Charley is insisting on having the yacht be a festive celebration, complete with international cocktails (OBVI). This wouldn’t normally be a problem, except Francesca is running on fumes. She is spread waaaay too thin, trying to pick up Izzy’s slack and balance her chief stew responsibilities. Needless to say, it’s not going well.

Charley is p*ssed that not all of his guests’ luggage has been unpacked, thus giving Francesca another conundrum to figure out. Putting Izzy down there to unpack means it will happen by the time the guests are ready to leave, but alas, are there really any other options?!

Charley’s demands are escalating and so is his attitude. He actually tells Francesca, “Day one, having fun. Day two, it’s on you.” Maybe if he stopped bothering Francesca, then she would be able to sort through some of this mess. I mean, if she can deal with Chelsea Handler, she can most certainly deal with this guy’s asinine demands.

Interesting how Izzy asks Captain Lee to switch from interior to the deck department. I mean, it’s not like she is doing much for Francesca and Elizabeth. She’s certainly not pulling her weight for this international decorating that’s going on. Perhaps she would be better off helping Eddie. Izzy def has to be a better deckhand than Shane, amiright?!

It has been requested that the crew dress up for international night as well, and it’s fascinating to know that Francesca just so happened to have Geisha gear laying around. Convenient… Although everyone looks cute in their garb, there’s nothing cute about how the night is going.

It is an absolute hot mess. Captain Lee is walking around without pants (cuz Izzy is behind on ironing) and Shane needs to be reminded that the deck crew is “behind the scenes.” Francesca is stuck doing 46726598156 jobs, Elizabeth is whipping up espresso martinis, and the food is ice cold due to the fact that Francesca is too busy trying to put out fires instead of running plates. Man, I bet Rachel sure wishes she had a Malia down in the galley with her. Side note: Remind me again what Izzy is doing?

When Charley gets up and lets himself in the galley to “help” Rachel — cuz it seems like she could use a hand — I can’t tell if he is really there to help Rachel or to get screen time. It’s fairly clear that money can’t buy Charley class… who does that? Listen, everyone can tell Francesca is on overload, but was it really necessary to get involved as a guest? This boat’s about to sink…

After the guests head to bed, Francesca gets called up and has a break down with Captain Lee. He can hardly handle these emotions and reminds her “there’s no crying in yachting.” Captain Lee looks like he could use a good, stiff drink. Perhaps Charley could whip him up something strong?

The next morning is a new chance for this crew to get their sh*t together. Just when it starts looking good, we cut to Izzy not being able to hold onto oranges for breakfast. This girl… Plus Rachel is having a hard time making her way around the galley. It makes it even harder when these guests start ordering as if they are at a diner. Poor Rachel. She has her hands full with these people and their ever-varying omelet requests.

Once the guests start complaining about how long their personalized meals are taking and whether or not the avocado is sliced or “guaced,” Rachel starts melting down. She calls it the worst “experience she has ever had in her 14 years on yachts.” Francesca steps in to try and calm her down since she is a bit of a pro at hyperventilating. Perhaps Rachel should just stick to breakfast buffets for future charters?

Somehow, the crew powers through the awful breakfast scene and it’s time for them to focus on the neon birthday party tonight. Because the birthday girl, Lexi, has a crush on James, naturally the primary suggests having her take body shots off of James while he wears a speedo. Of course. James is obviously down because “Lexi’s fit so this could be a lot of fun.”

In the meantime, there’s prep for a beach picnic and I am fairly certain Francesca lost her marbles sending Izzy as interior representation. She def did it to just get Izzy off the boat for a bit. I see you, Francesca!

When the guests head off to the beach, Shane thinks he is on vacay. “Yachting is so me!” Uh, Shane. You are aware that you have to WORK whilst on the yacht, right? This dude’s floating in the sea shirtless, sans radio, and ya’ll know what that means. When Captain Lee tries to reach him and sees him running around in board shorts, he is peeved. I guess because Eddie didn’t specifically tell Shane NOT to take a quick dip, he thought it was allowed? Not on Captain Lee’s boat. Maybe yachting isn’t sooooo you, huh, Shane? LOL to Eddie calling Shane “Sunshine” a little later on…that should totally stick.

On the beach, Izzy gets the chance to pitch her idea to Eddie about joining the deck crew. As if on cue, the small boat begins to float away. Izzy does a great job of anchoring the boat and she actually hustles! Maybe she is on to something…

Later, it’s nearly time for James to put on THE PRIMARY’S “budgie smugglers” (omg, gross) and surprise the birthday girl with a package… er… There’s only one problem: Right before James’s big surprise, a fight breaks out between the guests. It appears as though two of the guests are fighting over James, the deckhand. They are actually allowing this to tear apart their friendship all because of James, who they have known for less than 24 hours. Cool. Reminder: James is not a toy. He is a human, no matter how much he loves to run around flaunting his abs.

As James stands there in his sparkly speedo and Rachel readies the cake, the crew watches awkwardly as the drama unfolds. After much ado, the fight subsides and the big James reveal takes place. James: “Shaking that a*s for tips, literally.” Although the birthday girl, Lexi, seemed to have enjoyed herself, her bestie chose not to continue celebrating. Talk about negative vibes.

Because Charley is well aware he is getting filmed and doesn’t wanna look bad, he lets Lexi’s friend know how embarrassed he is that she started beefing before the surprise. The drama builds and the crew is enjoying every minute of it… only because tonight the spotlight is not on them. Phew.