Home Below Deck Below Deck Recap: James Questions His Job While Izzy Gets Praised for her Job; Plus Will Shane Make it Through All of the Charters?

Below Deck Recap: James Questions His Job While Izzy Gets Praised for her Job; Plus Will Shane Make it Through All of the Charters? 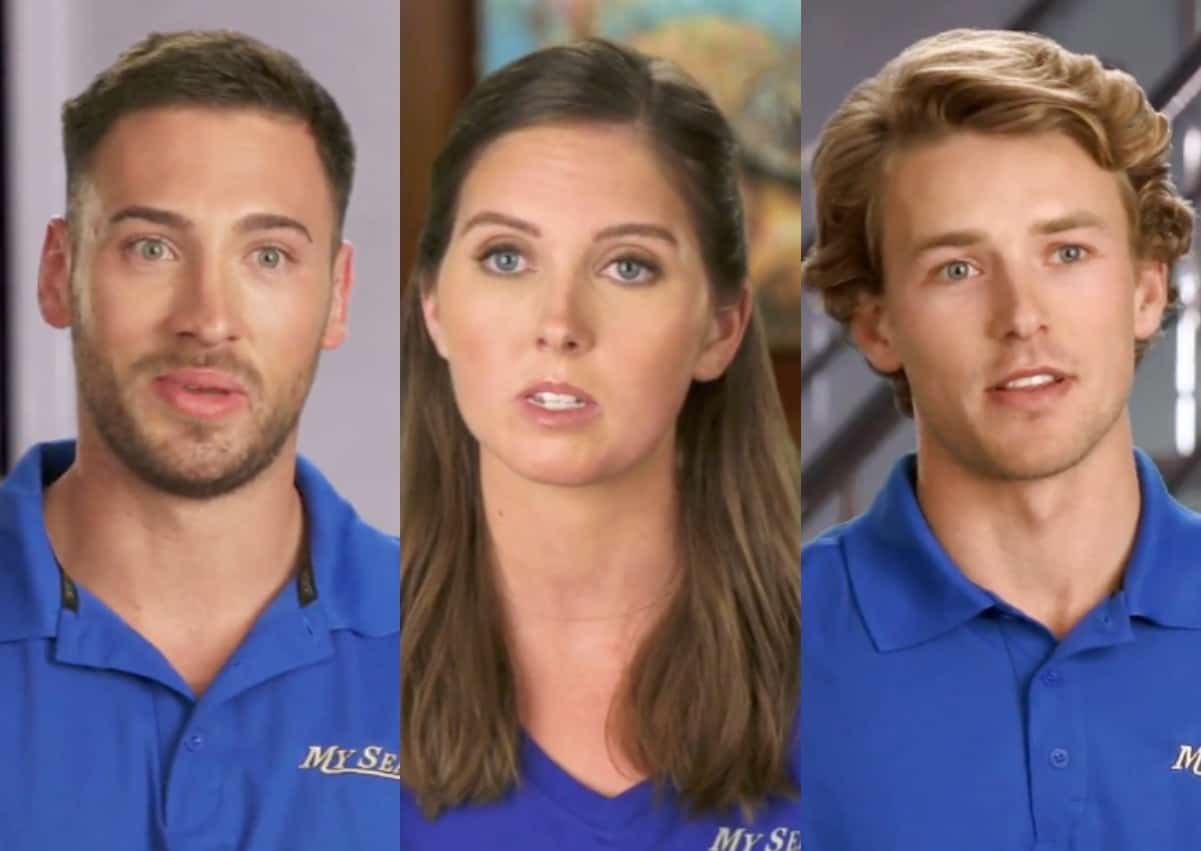 It’s only the first night of this babysitting boating adventure, and already the new stew is full of waterworks, the deck crew is scrambling, and no one seems to be part of a team. It’s gonna take something big to turn the crew around on this episode of Below Deck.

Basically, this crew is a disaster. The lack of communication, effort, and urgency behind anything they do is completely missing. To be fair, Ashling doesn’t have her luggage and is on utter and complete overload. But at least SHE is trying to work…as opposed to Shane and James.

Eddie has about had it with Shane (aka Sunshine), and James needs to understand the fact that this is a job, not a vacation. He inappropriately chats with the guests about how everyone in his crew is “taking this too seriously” and nearly swoons when the charter guest tells him that he looks like Tom Hardy. I guess 75 jello shots and cocktails would mess up your vision and your brain cuz James certainly does not look like Tom Hardy.

The next morning, the crew is up and ready to take on the day. Ashling STILL doesn’t have her luggage which means “no underwear, makeup, face creams,” but she looks pretty good all things considered!

Ah, it looks like “Tom Hardy” (James) effed up last night. The deck is an absolute mess and Izzy and Eddie are stuck cleaning up the leftovers…that James was supposed to handle. Not nice… When James finally rolls out of bed, Eddie lets him have it. James is annoyed that Eddie is behaving like a boss (??) and yelling at him right when he wakes up. James’ attitude is going from bad to worse.

Over breakfast, Eddie attempts to be “cool” and amp up the guests. He reminds me of a dad or a camp counselor trying to excite disinterested teenagers. He talks of jet skis and water toys and beach picnics — oh my! But let’s be real — a beach picnic always has a dark cloud over it on Below Deck. Things don’t always go as planned and it’s clear that it’ll get messy when Captain Lee foreshadows he wants it done in one trip. YEA RIIIIIGHT.

It seems as if none of the crew have ever set up a beach picnic in their lives. The set up is legit taking forever and they look like absolute amateurs as they fumble with the pop-up tent while the guests whine about starvation. There is zero hustle coming from the crew and Captain Lee is beyond annoyed as he watches through binoculars.

The guests don’t even seem excited about this beach picnic anymore because they are straight hangry. I am baffled how Francesca can just lollygag about as the guests make land on the beach. WHERE IS THE URGENCY? Did the crew members forget that this is a superyacht and therefore the guests deserve superyacht treatment even IF they may only be 21 years old?!

Eddie is sent back and forth and back again to scoop up forgotten, but necessary, picnic requirements. Margaritas? Forgotten. Shot glass? Forgotten. Sunscreen? You guessed it. Forgotten. Francesca blames Elizabeth’s lack of initiative for forgetting the sunscreen, but you know the old saying…if you want the job done right, Francesca, just do it yourself. Still a bit unclear about what Shane’s job is. I feel like he just stands around complaining about all the lifting things, but he never actually lifts anything.

Props to Eddie for remaining calm throughout that sh*tshow of a lunch. Every time he was radioed to drop something back to the beach, he was there. When the guests wanted to get right back on the boat after the meal and drinking games, he was there. Maybe Izzy is taking cues from him as her leader. She is really shining in her new role as a deckhand. Turns out that Izzy is immunocompromised and was actually paralyzed from the shoulders down. She had to learn to WALK all over again…so what she is able to achieve now is pretty awesome.

Once the guests and crew get back on board, Captain Lee calls Eddie to the wheelhouse and asks for a rundown. Captain Lee senses Eddie’s frustration and he also knows that this crew is truly something else. He is exasperated that they are acting like “they don’t know what to put in a f*cking picnic basket,” and he has had it with the lack of effort put forth by most of the crew.

Maybe part of the problem with this crew is lack of COMMUNICATION. Here’s Rachel, minding her own business, sticking to the grilling plan of surf and turf, completely caught off guard upon seeing the dining room table set for service. Rachel is left in the dark and has to completely reevaluate her dinner plan. God bless her for being so chill about it…I feel like one of these times, she’s just gonna explode!

Later, Eddie praises Izzy for doing a great job. He reminds her to be confident like any good camp counselor would do, and they do an awkward high five to celebrate the moment. Speaking of awkward… Why are the guests wearing masks for their surf and turf dinner? After many drinks are had, the guests make their way to their cribs, I mean beds, and enjoy their final night on board the yacht.

The next morning, it’s time to say goodbye to the children and send them back to their parents. They dine on duck confit and waffles (they don’t even deserve it, but whatever) as the yacht pulls into the harbor. Dressed in their whites and pasting smiles on cuz #tipmoney, the crew says goodbye to the guests, who make a point of saying it took way too long to get to the beach. Way to pour salt in the wound — you can bet the crew is stressing about that fiasco as they know it could potentially take a chunk out of their tip.

Captain Lee looks a bit disappointed during the tip meeting. He explains that Francesca and Eddie are carrying most of the weight and Elizabeth nods in agreement. Like, wtf. If you realize that, then HELP. Captain Lee reminds them all that this is not a vacation and you can see James shudder upon hearing that. They manage to get a fine tip from these guests, and things start looking up for Ashling as her luggage finally arrives!

After a day full of cleaning up, it’s time for a crew night out. Rachel seems stoked: “It’s cocktail time. I haven’t even bathed. But it’s alright, I Febreezed myself.” LOLOL. Hey listen, ya gotta do what ya gotta do. Everyone seems in a good mood during dinner, so much so that they decide to head over to the bar post-dinner. James looks happier than a kid on Christmas morning, except, no one is at the bar but them and it looks terribly boring as Shane talks about work and they all just plop onto sofas. It is funny to see the crew struggle to understand James and his comments. To be fair, I can NEVER understand him.

After a short-lived bar excursion, they are back on the boat. Elizabeth and James have a heart to heart where James explains his disdain for how his job is currently being run. In his words, he explains, “It’s just work now.” Well yes. You see, that’s how things go. You put in work, you get paid. In *that* order. Why is James so surprised to figure this out?!

In the morning, James calls his mom because, as he explains, he was having a rough day and “is a little delicate.” He is feeling better today with a clearer head and decides to stick it out. Rats.

So Rachel is not only a chef, but she is also an ROTC alumna who happens to be a mean ironer. Elizabeth is THRILLED to hear this news as it certainly makes her life easier. But not everyone’s life gets easier. Take Sunshine, for instance. Does Shane think he is the only one who is tired on this boat? He legit just tucked himself in for a nap, without asking, when everyone else is WORKING?! Whoa, whoa, whoa. Like, at least be slick about it…oh, and prepare yourself for the wrath of Lee, Sunshine…